Targi was a 2012 Kennerspiel nominee about grabbing stuff from the desert to expand your own personal tableau.  It’s all played out by elegantly placing 16 edge cards to create a grid, then laying out nine in the middle, mixed between the tribe cards used to expand your personal empire, and the resources required to pay for these expansions. You do so by placing your meeples on the action cards around the edge in turns to create intersections in the centre which allows you to take those central cards.

And this expansion is a bit of a 2.0 – it makes some quality of life improvements by making water a kind of ‘any resource’ currency, and the bonuses in the moving Targia help with the general flow of play. There is the addition of a small set of sand dune cards too, which are powerful one-use cards, but does mean you’ll be unable to create one of your two normal intersections in the main play area. This trade off can either be quite useful, if there’s nothing particularly good you want, or something to anguish over. Equally, the addition of ‘one-use, but whenever you choose’ cards is also a worthy addition.

It’s an interesting layer of choice to add to the game, but it feels like we’ve lost a bit of the initial simplicity at the heart of Targi. What it improves is probably worth the price of entry, especially if you’re picking both boxes up for the first time. For those who want to keep their desert gaming simple however, you might want to pretend it’s a mirage. ∗ 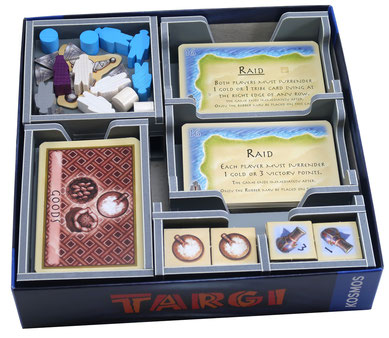 Compatible with Targi® and Targi: The Expansion®.