Forget dogfights, micefights are the next big thing 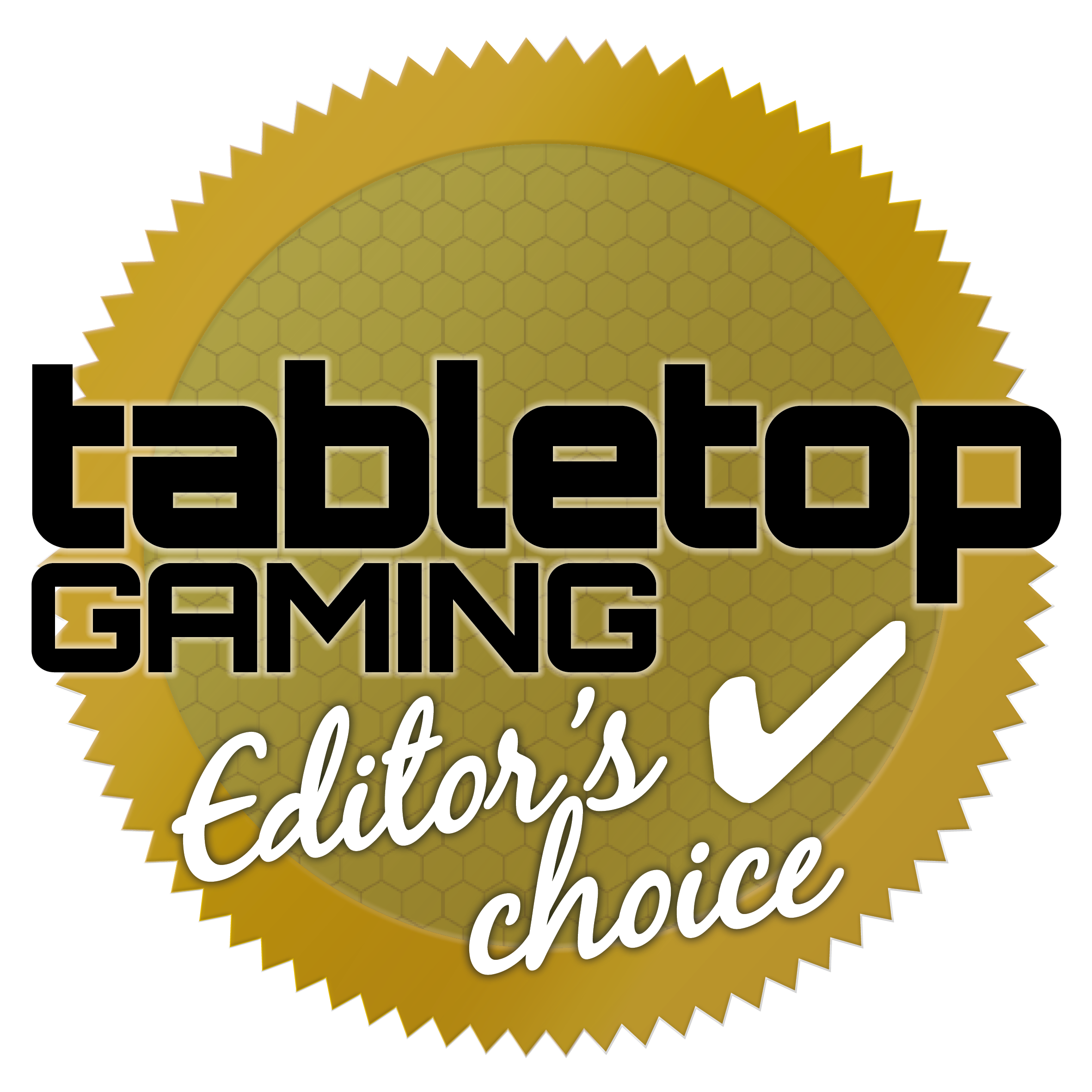 When Jerry Hawthorne’s Mice and Mystics came out in 2012 it was something of a smash hit. This story driven adventure game that put players in the role of tiny mice exploring a gigantic castle was a wonderful breath of fresh air and there were numerous reports of publisher Plaid Hat Games struggling to keep up with demand as eager gamers snapped up copies as soon as they hit the shelves. A few years later and Jerry is back in the world of Mice and Mystics, although those expecting another dungeon explorer may be surprised by the direction he has taken for the follow-up.

You see, rather than simply being another adventure, Tail Feathers is a miniatures-based aerial and ground-based skirmish game that sees players working through a scenario detailing the epic battles between the brave Downwood Militia and the wicked Vermin Raiders. The lazy way to describe Tail Feathers is X-Wing with mice flying around on birds instead of spaceships and laser blasts. And if that sounds like your kind of thing, then pop your coat on and head to your FLGS straight away. However, that doesn’t really do Tail Feathers justice because straight from the box it offers a far more thrilling experience that doesn’t require countless new miniatures.

First things first though and Tail Feathers has a pretty detailed rulebook you’re going to need to absorb before you can start flying through the forest and this isn’t something you’re going to crack straight out the box and start playing. On the plus side, however, all the (quite frankly gorgeous) miniatures of mice and birds are pre-built so there’s nothing to worry about there. You start the game by setting up your imaginary forest using four cardboard tree templates that are placed on the four corners of a (typically) 32-inch square playing area. Alongside this you also choose which units you’ll be taking into battle. A little like X-Wing you can combine different ships and pilots (in this case birds and mice) and there are even rookie/veteran versions of the mice. The scenarios actually explain what combo of mice/birds to use, although there are also rules for creating your own scenarios/units after you’ve played through the ones suggested.

Once you’re set up, gameplay is split into four phases: mission, tilt, activation and final. The mission phase sees you secretly sending off your ground troops on a mission that is resolved in the final phase. You can send up to four of your ground troops off on one of these missions, by temporarily removing them from the playing area, and the results are resolved in the final phase. Missions are selected and then placed facedown near the battlefield so your opponent doesn’t know what you’re up to. Then in the final phase you flip them over shout ‘ah-ha’ and execute your top secret mission, which can include returning to your home nest to defend it, attacking any flying units or even doing nothing, which helps to throw your opponent off. You can really imagine these little mice or rats scurrying off on their super secret expedition and, although it’s a small part of Tail Feathers, it adds to the larger picture of forest combat.

Next up is the tilt phase when you literally tilt the birds on their plastic stands to show which way they’re about to fly, i.e. right, left or centre. There is a little bit of bluff involved here because after being set your birds can still be adjusted during the activation stage depending upon what’s happening during combat, so you can attempt to trick your opponent. However, to change your flight path you need to pass a piloting test during the activation stage.

Seeing as we’re talking about the activation stage already, let’s crack on with that, as that’s where the real meat of Tail Feathers lies. Here you’ll be moving, fighting and even carrying your ground troops around. When flying, movement is measured using special flight path tokens that are placed on the battlefield, while ground troops can move between spaces on the tree. Both are a breeze and quickly become second nature.

Equally straight forward is the combat and here it’s worth mentioning the charming range finder. Instead of a tape measure or ruler, Tail Feathers has a plastic branch that’s used to find close or ranged combat… again little touches like this add to the overall theme. When you’ve found out if it’s ranged or close combat you roll a number of custom combat dice depending on that figure’s ranged or melee attack value. Arrows mean successful ranged hits, swords are for melee and shields, that’s right, block hits. There’s also a cheese icon that can be kept in reserve and spent on special action cards, which are used to buff attacks, receive extra activations, etc. The concept of the custom dice and the cheese wheel will be familiar to those who have played Mice and Mystics as it’s the same system.

And that’s pretty much it for the basic rules, however if you like a little more strategy, there are a series of advanced rules that unlock events like death spirals when both birds crash into each other, floating leaves that ground troops can ride on while floating over the battle area (a system that uses the range finder to great effect) and tail feather tokens. The latter is a neat little system that sees tail feathers exploding from a wounded bird and temporarily blocking line of sight. Again, seeing these feathers scatter across the sky adds another layer to the rich themes of Jerry Hawthorne’s mousey world, which made Mice and Mystics such a hit. 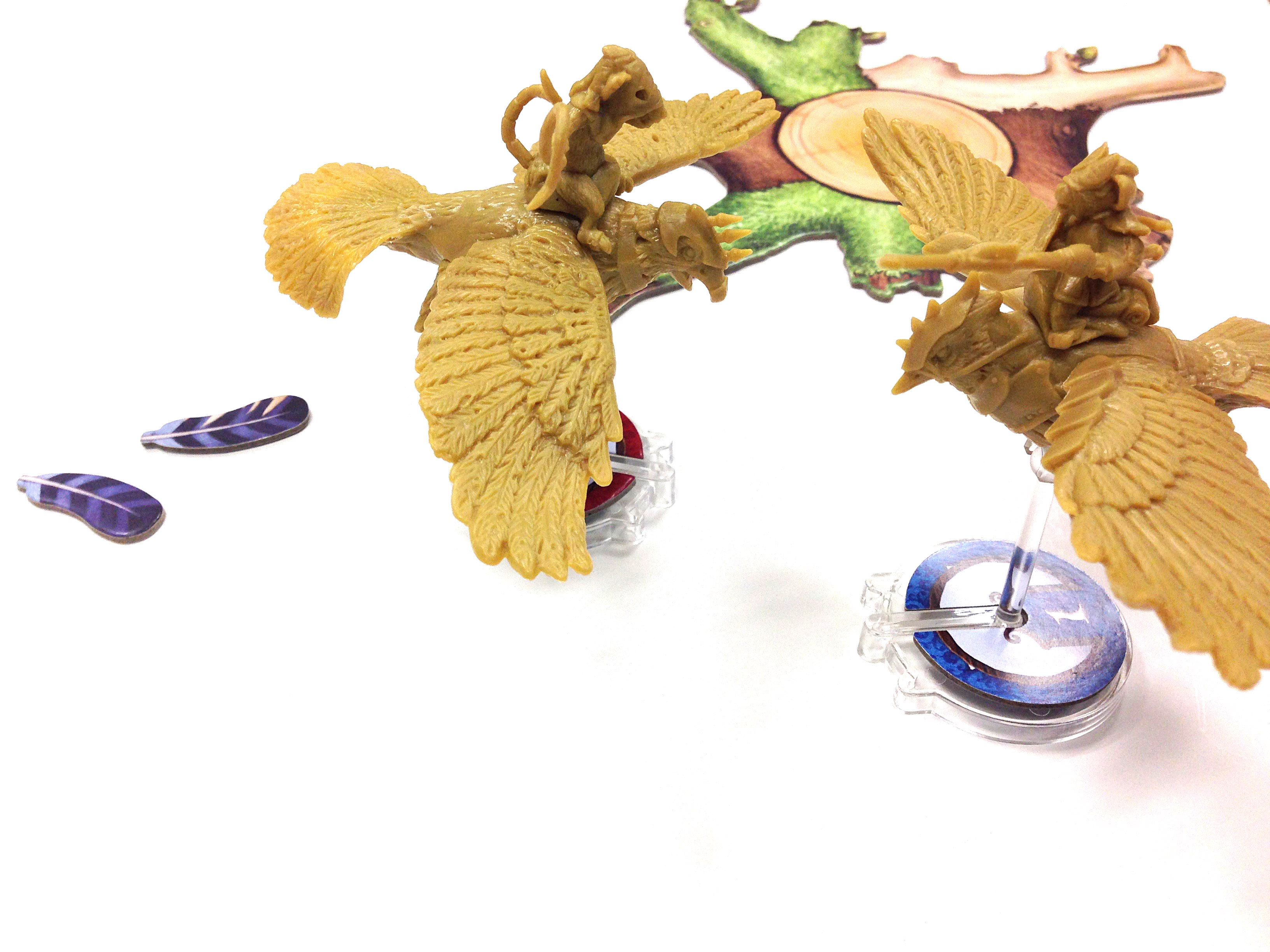 There’s something wonderfully evocative about Tail Feathers. In a bizarre way it’s much easier to imagine these mice engaging in perilous combat on the back of birds, than it is to picture epic space battles. It’s also impossible not to fall in love with the charming figures – which makes it perfect for family play – but the added depth of advanced rules ensures hardened dogfighters will find it captivating too.

IF YOU LIKE X-WING MINIATURES GAME TRY TAIL FEATHERS

Veterans of space battles will immediately be at home with the aerial combat, while ground troops and scenarios add extra layers of depth.