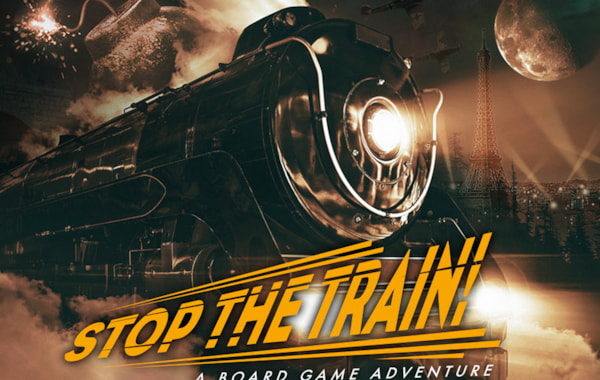 Stop the Train is pitched as a thrilling game of social deduction. Said train is armed with a bomb, hurtling towards destruction at its final destination, with passengers that each have their own agenda. The saboteur of course, seeks to speed up the train, so that it can cause the most destruction. Another, wants to speed up the train to make the land speed record – but to stop it before its final destination. Amidst numerous roles available, you’ll draw three cards that influence the speed of the train, pass only two to your next player, who will make a decision based on their own agenda, and potentially bluff the reasons for doing so, and move the train closer. You need to ascertain quickly who isn’t trustworthy, but of course, it’s not as simple as it first seems.

I confess going into this game expecting to fall in love with it. The speed, the intrigue, the variations available, set it up to be a great game. When playing multiple times though, it sadly derails, and the very aspects that made it appeal, now lessen it.

A shorter game should be more tense and thrilling, but it’s too quick a game to fully understand the potential nuances that it claims to have. That, combined with so many different roles available, mean it’s either difficult, or takes longer than most game groups want to play it for, to memorise the character roles and goals, lest you constantly be searching for the explanation sheet. The heavy weighting in favour of speeding up the train made it difficult to make assumptions at all. It would either need to be a longer game, or a lower player (and character) count to offer the excitement it tempted us with. By the time in each game you’ve got a handle on what might be going on, you’re too late, and the train has reached its destructive end.