Can a miniatures wargame work without the miniatures? It's time to find out

Have you ever fancied playing a miniatures-based wargame but don’t really fancy buying dozens of figures and then going to the faff of painting them all? Perhaps the idea of lugging round boxes of models to your local club fills you with dread… but there’s still that little niggling voice that says: “wargames are cool – you should try them”. Well, Shadows Over Normandie: Achtung! Cthulhu could be just the thing for you because it replaces all those fiddly figures with cards but offers a wargame-like experience. Intrigued? Read on…

Shadows Over Normandie is actually a spin-off from the previously released Heroes of Normandie but with a Cthulhu-themed twist, thanks to the guys over at Modiphius and their Acthung! Cthulhu range of RPGs. So now the Nazis and Allies from the original have been given a Lovecraftian makeover and they’re joined by the horrific Deep Ones, meaning you can now play with up to three people.

However, just like the original in Shadows rival players are battling over a grid-based board and the units are represented by thick cardboard tiles. Despite the fact some of the tiles are actually quite small (around an inch-square) they’re packed with all the vital information you need to play, such as rank, special abilities, movement, etc. At first glance the cards look a confusing mess but after a few turns the clear iconography becomes second nature. In fact, it quickly becomes easier than a typical wargame where you may have to reference a rulebook every few turns.

This clarity continues on the board itself because aspects like cover or tricky terrain are indicated using the same icons. For example, a wooded area may give you a +1 to armour but reduces movement by one two… and it’s all there for everyone to see on the board – no more disputes about whether or not a unit is in cover.

Things get even more interesting during the Order phase in which you secretly give instructions to your troops using tiles. These tiles have numbers on them that dictate the order in which units will activate, i.e. one goes first, two goes second and so on. However, you also have bluff tokens that look just like a normal order token but don’t actually have a number on, meaning the unit won’t activate. This is a neat way to throw off your opponent and confuse them about your potential plans.

If you do choose to activate then your units can move and fire and, you guessed it, things couldn’t be simpler once again. If a ranged unit has line of sight to an enemy (and hasn’t moved that turn) then most weapons can actually shoot across the length of the board, although they suffer a -2 penalty. Once you’ve chosen your target, you roll a D6 and add any modifiers to it. Say, for example, a Deep One Spike Thrower unit is attacking a Rangers Support Team infantry unit, it would get a +3 bonus for attacking infantry and must score 5 or more to take out the Rangers. The Deep Ones player rolls a three – so three plus three equals (come on… you at the back, please pay attention) six and the enemy unit is wiped out. Of course, the target unit may get bonuses for being in cover or inside a building but thanks to that clear icon system we mentioned earlier, it’s really clear to quickly gather up the necessary information by using the system of icons. 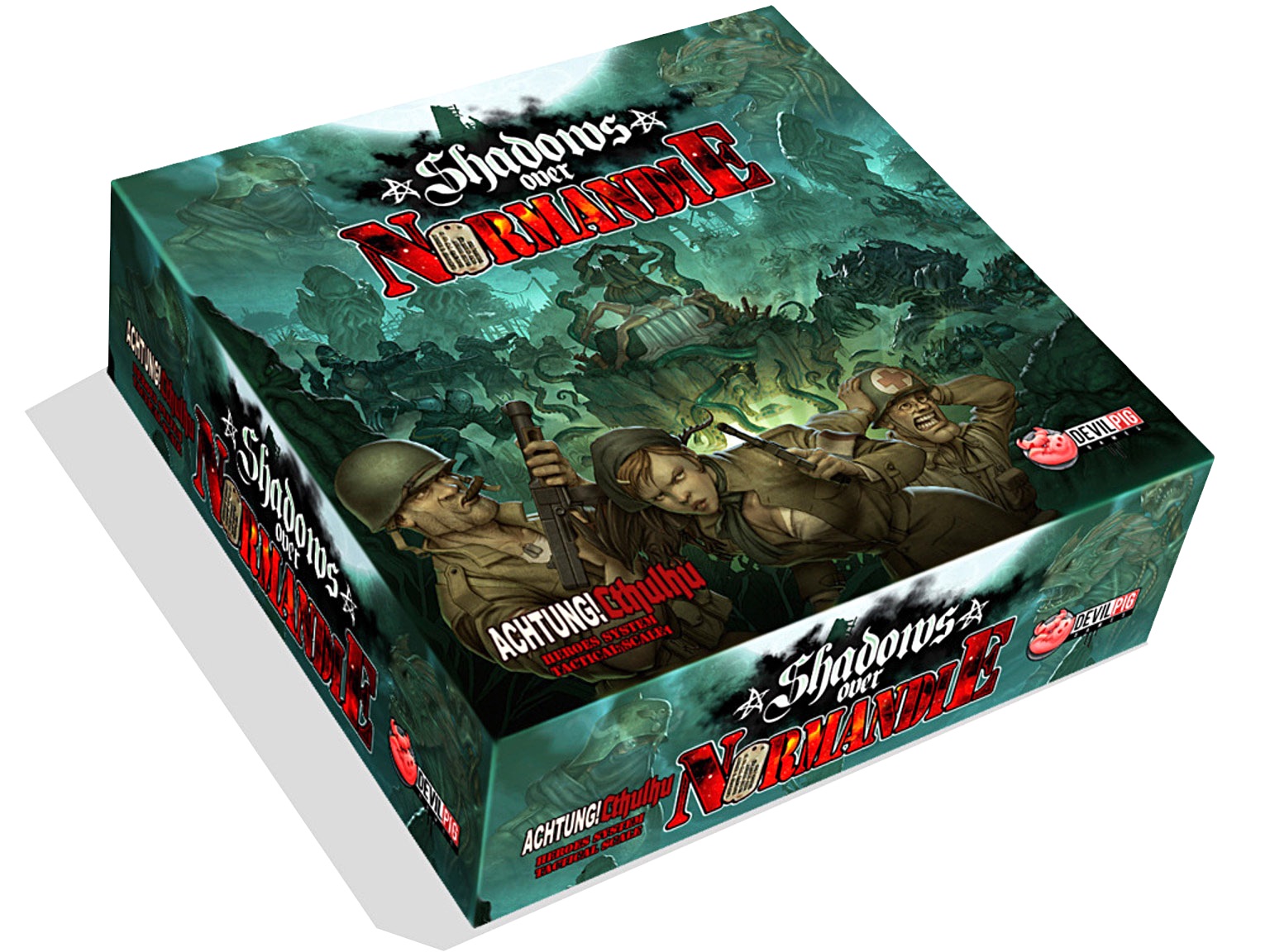 One of the new elements introduced in Shadows is something that’s become a pre-requisite to any Cthulhu-themed game: insanity. Let’s face it, if you were faced with a big tentacle-covered monster legging it towards you, the chances are you would lose your marbles a bit. At the end of a round any units that are susceptible to madness must make a sanity check to see why they’re saying ‘wibble’ over and over and again. Some of the units have a Mythos Manifestation value that represents how terrifying they are, so a small group of tentacles have a rating of three, while the massive Star Spawn is rated at six!

When a unit has been suppressed and is within line of sight of a creature with the Mythos Manifestation ability, they must roll a dice and score higher than the rating of that enemy. If they fail the sanity check, the player randomly draws a token from the Madness bag. These tokens feature a range of afflictions such as Catatonia (the unit cannot do anything in the next turn), Suicide (the unit immediately takes a hit), Hysteria (minus one to all dice rolls) and so on. This is a great little mechanic that fits the theme wonderfully and really ensures the game plays differently to the original.

Along with insanity check, this game also introduces a simple spell mechanic for some units, as they tap into the arcane magic of the Old Ones. There are a number of different spells to weave, such as fog (which reduces visibility), the Mythos Barrier (stops Mythos creatures from entering an area), Blessing of the Black Sun (a large blast that requires a template to be placed from the caster), etc. Again, the introduction of spells adds another layer to Shadows Over Normandie and successfully casting spells like the Blessing of the Black Sun then getting that template out to see who you hit is inherently cool.

Shadows Over Normandie feels like a bit of a hidden gem. Yes, it does take some time to learn all the icons but after a couple of turns they become second nature and you realise what an intuitive and enjoyable system Devil Pig has created. What’s more the Cthulhu theme doesn’t feel tacked on and adds plenty of extra elements (spells, insanity, giant tentacles) that actually make this more enjoyable than the original.

Shadows Over Normandie offers a little more depth but does away with the miniatures. Plus the Cthulhu theme adds an interesting element.