The battle between Scott Pilgrim and Matthew Patel (the Ex of his super-crush, Ramona Flowers) is playing out during the Battle of the Bands… and you must either take the side of good or evil. This miniature combat game is for two to three players (despite what BGG says), but is disappointing at both player counts. With three players, two team up to play the Good Guys, but they don’t take separate turns or have clearly defined responsibilities. Instead, the players make joint decisions and the second player is really just an extra pair of hands.  It feels as if the three player option is merely an acknowledgement that there is far too much for a single player to cope with alone.

The rule book recommends that the Good Guys play with four of their five possible characters. Each character has its own tokens, fabulous miniature figure and chunky player board with overly-sensitive life counter dials (just knocking the board may lose you ten health). You choose which (and how many) characters to move on each turn. When you leave a Good Guy stationary, they get a token, which can be used to take extra moves later. The turn starts by rolling five custom dice. Each dice icon allows certain actions – punching, kicking, healing, picking up items – but all icons also allow you to move, some further than others. The healing hearts can also be used as ‘wild’ moves, allowing you to choose from any of the other actions. With five dice showing icons that have multiple meanings, a re-roll available and four possible characters to move (some of which may also have tokens to spend), the choice is almost paralysing.

To complicate things further, each character has special actions that only they can take, providing you have the right combination of dice. Two of these actions are available at the start of the game, but three more can be unlocked as the character levels up. Plus, each character has a combo action that can be taken several times in the game, for free. The cognitive load is overwhelming. Either you must analyse the merits of each possible play, which slows the game down to a crawl, or make random snap decisions, that invariably leave you feeling like you’ve played poorly. During my plays, multiple opponents asked to stop playing and several games were abandoned.

While the player controlling the Bad Guys only has a single character board to refer to, they still have four miniatures to move around the board – Matthew Patel and three Demon Hipster Chicks, which move when Matthew moves. The Demon Hipster Chicks can’t sustain any damage and therefore ‘poof’ off the board when hit, but magically return close to Matthew at the end of his next turn.

The action takes place in a concert venue. There’s a 3D stage at one end and a totally pointless wall down one side. Player aids are printed in very small print on each end of the board, though they conflict with the instructions in the rulebook. Tables, chairs, speakers and band equipment, which are unsatisfactorily constructed from punchboard, are available to pick up and throw to cause damage to an enemy mini.

Movement (and ‘line of sight’ for throwing) is along rows, columns or diagonals – though the brown squares and faint grid lines don’t make it easy to see diagonal paths, adding to the frustration. As well as damage, some attacks also deal knockback and here the rules are not intuitive. Knockback into walls (even invisible ones) deals extra damage. Launching attacks may gain you XP, but you have to remember to take it, which you often don’t.

The pre-painted miniatures are good quality and full of character: they really are the star of the show. The asymmetric play adds interest, but isn’t enough. Overall the game is not worth playing. 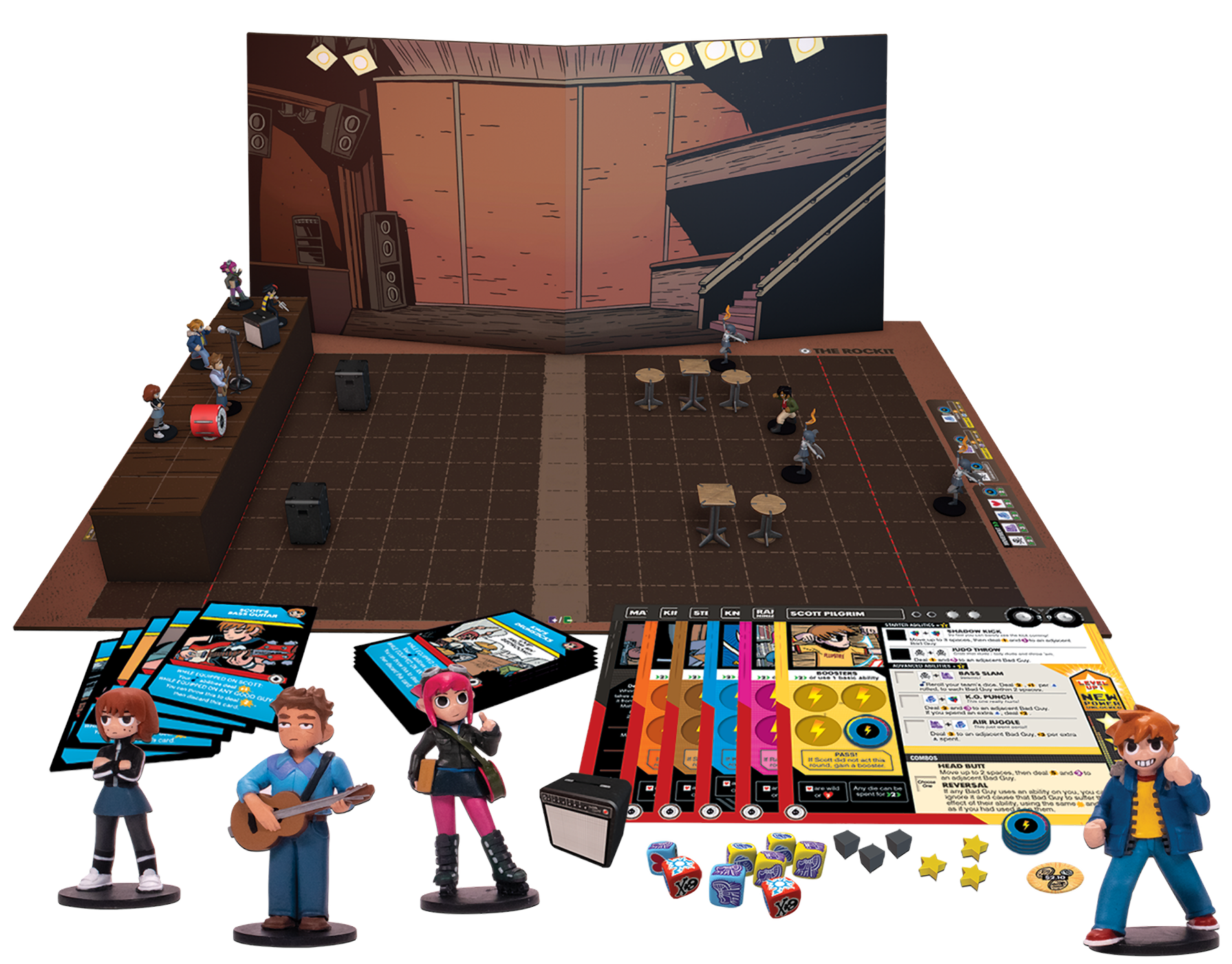 This massive box (with an equally huge price tag) is mostly full of air.

TRY THIS IF YOU LIKED: Scott Pilgrim vs. the World (the film)

This game will suit die-hard Scott Pilgrim fans, but few others. If you’re looking for a great game… keep looking.