No time to be chicken

Rurik: Dawn of Kiev is a game that tricks you into thinking it’s a war game. In truth, it’s a Eurogame where you track who is winning by moving soldiers around and killing one another. The game uses area and majority control to dictate what parts of the board you’re in control of, and conflict involves spending attack actions and flipping a card for casualties. That’s the trick – the reality is that the game is played out on a strategy board to the side, where players bid with their numbered advisors for a set of actions. If you’re at the top of the column you’ll get more of that kind of action (say, movement, or tax) – but that might mean using your fifth advisor, who has the most weight in these things, but also makes that action the last one you do in a turn.

See, you’re not just bidding, you're programming your turn. This makes the game strategically interesting as it abstracts your planning away from the goals on the board. Yes, you need to pay attention to both, but there’s none of that ‘rush to the goal’ blindness that can befall a lot of us less well marshalled war game players. It is, frankly, a joy. After all, there’s something deeply satisfying about a good scheme.

Small features like the rebels which give you random resources once removed from play make games varied, as do the uses of hero powers, which allow bonuses to tax, movement, or war stuff. Building in a region solidifies your position there, and also means the board changes before you – once your opponent gets a stronghold in a region, you’re less likely to want to try and take it. Similarly, resources are all loaded into a boat when collected to represent your trade, these give you extra currency which can be used to augment the position of your advisors on the strategy board, boosting them to a better position. Also, blissfully, there’s not much in the way of token shuffling going on here – admin is kept to an absolute minimum. 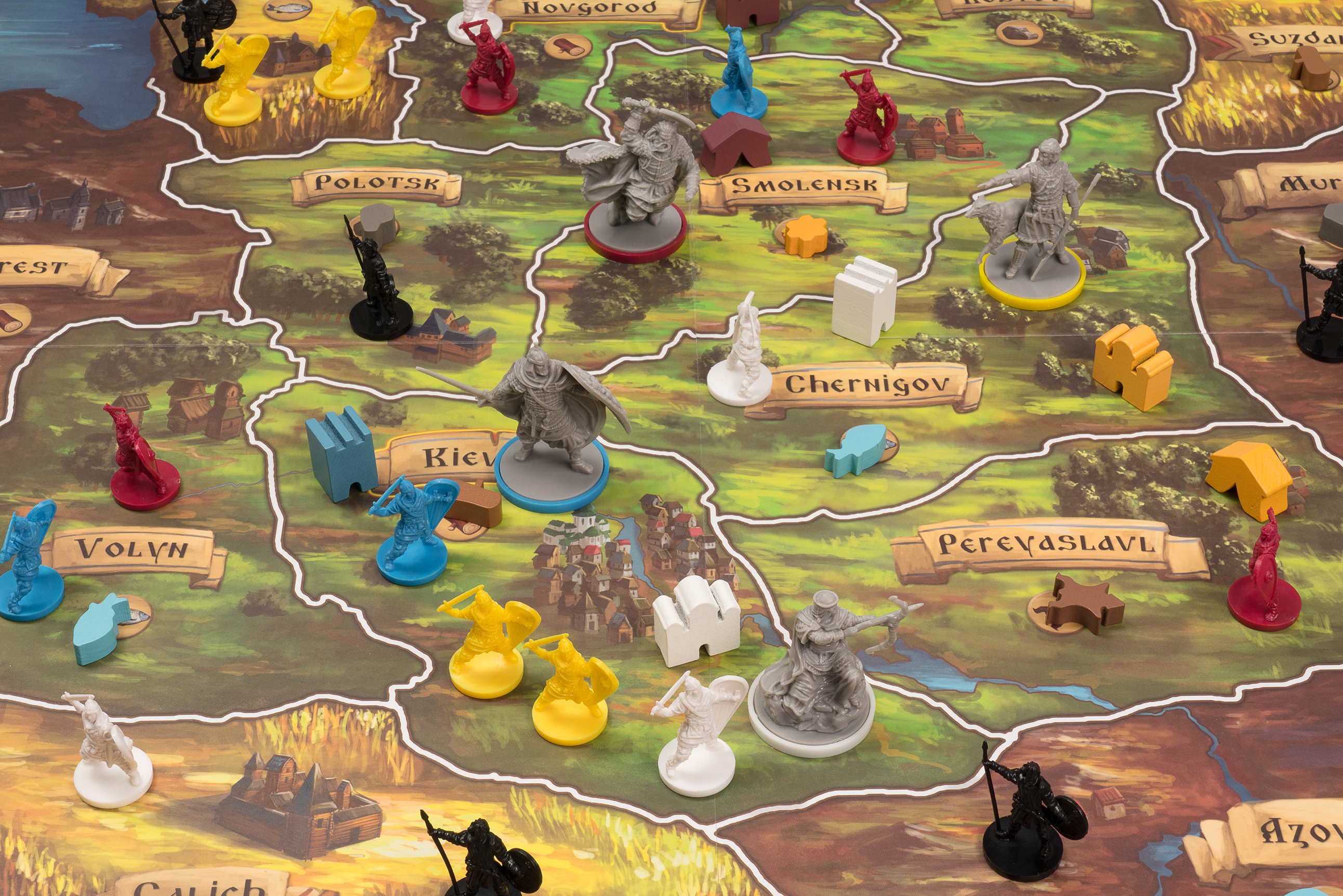 That quickfire of the little things in the game that make it all run smoother is important as it just shows how much care has gone in to making the game as slick as it is. There’s only four rounds to a game and it’s probably going to be over in half an hour (maybe an hour and a bit with four of you on your first go). It’s a world full of meaningful decisions which all push against your opponents in a satisfying way – and of course, you get to move some little men on a board and claim a new region, and who doesn’t enjoy that?

Like the best games, it makes you want to play again immediately, with your strategy improved – and from our experience, this feeling doesn’t really go away.

A hyper-simplified and extremely fast game of conflict and conquest that make the most of its Euro mechanics without losing sight of its goals. It might be the most medieval war you can have in 30 minutes.

TRY THIS IF YOU LIKED: Scythe…

While Rurik doesn’t have the crunchiness of Scythe in some respects, it does offer us similar – but faster – thrills.