Richard Garfield’s chaotic robot-racing title has been given a tune-up and fresh coat of paint, but is that enough to survive today?

One of Richard Garfield’s earliest projects, dating back to the mid-1980s, the original Robo Rally wasn’t published until 1994, after the now legendary designer had found success with Magic: The Gathering.

This new edition is the most drastic revision of the robot-racing title to date, but it still bears many of the hallmarks of its 30-year history – offering something that feels dated, especially in the face of contemporary spiritual successors such as Mechs vs Minions.

What remains timeless is the theme. Programming robots to whizz around a factory floor packed with conveyor belts, springs, lasers and pits in an attempt to beat their rivals to a series of checkpoints holds the inexhaustible smash ‘em crash ‘em appeal as Robot Wars (also experiencing a recent resurrection). What makes Robo Rally such a joy (at least in concept) is the very probable chance of careening wildly out of control as the machines blast and shunt each other, ruining a carefully-plotted run of moves.

Garfield has made some significant changes to the core gameplay in this edition, the biggest among them being the decision to ditch the shared deck of programming cards dealt to all players in favour of individual decks drawn at the beginning of each turn.

This helps to give players more flexibility in their choice of actions, counteracting some (but certainly not all) of the frustration from a lack of control. 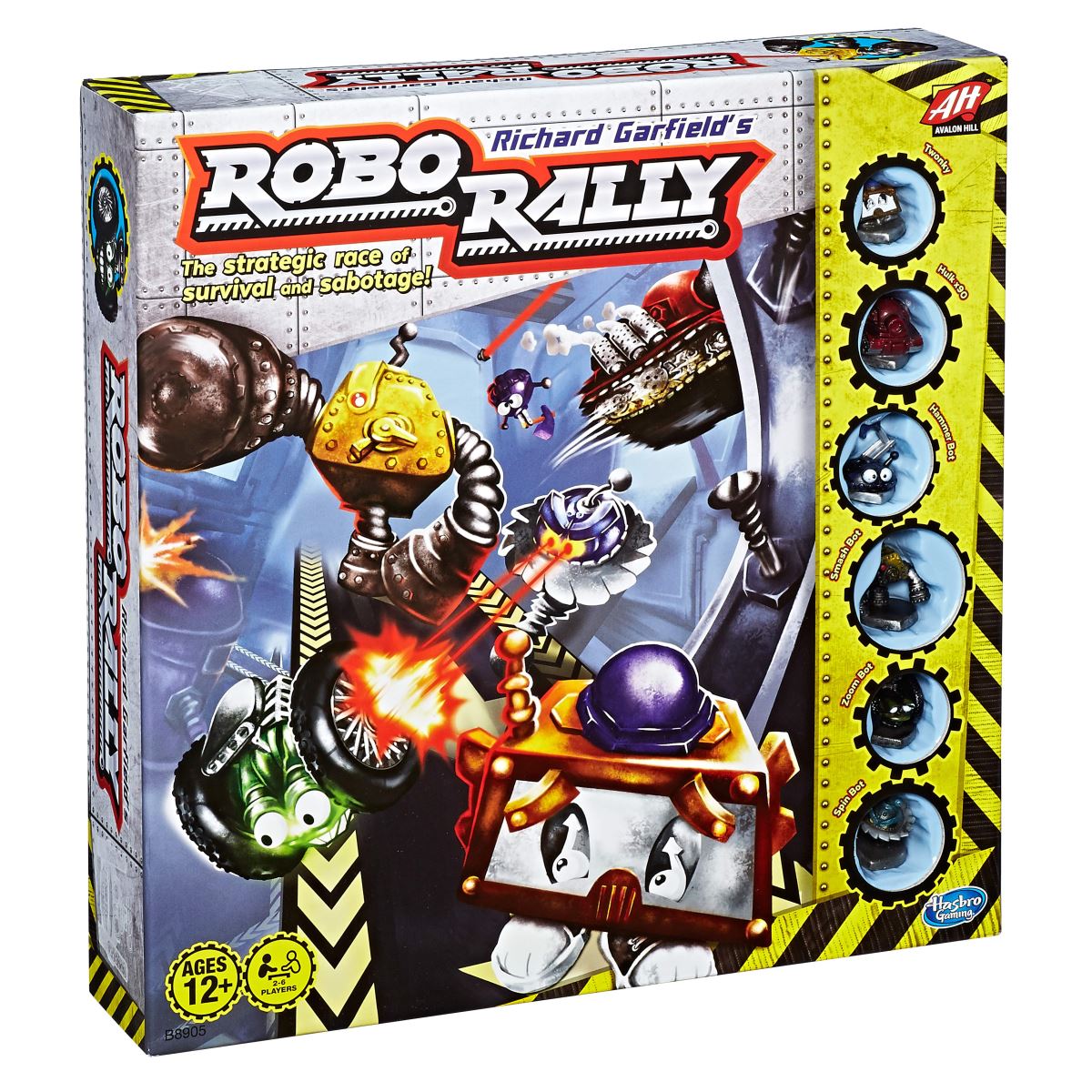 Balancing out the easier-going selection of cards is the revised damage system, which now dishes out cards to players with a variety of ailing effects, from immediately having to reboot your machine as the result of a worm to the most common damage type, spam. Spam cards essentially replace the original game’s damage tokens (which resulted in fewer cards being dealt at the beginning of a round) and are shuffled into a player’s deck, neatly causing the same limiting effect. Players can opt to play the cards in one of their programming slots when they pop up, forcing them to randomly play the top card of their deck but repairing the damage.

The risk-reward aspect involved in gaining and clearing damage gently encourages both more aggressive play and the inevitability of adjusting to unpredictable behaviour, which really remains the game’s strongest draw.

Expanded choice is the key part of this new Robo Rally, a smart – and arguably essential – design decision in order to attract a new audience today. To this end, a new marketplace and economy system involving the gathering of energy cubes is a very welcome addition. Players can purchase one of a number of upgrade cards using their cubes, increasing their racer’s abilities and power with either permanent attributes or new ability cards to add to their deck. The powers feel useful and worthwhile to acquire, offering an added layer of strategy due to the extra resource gathering required.

The mechanical changes do effectively bring the game into the 21st century, but problems remain. The relatively limited pool of moves available – even when bolstered with an upgrade or two – can make turns feel repetitive and what should be a fast-paced dash feel drawn-out.

What’s most disappointing is the subpar presentation. The robot miniatures are painted, but finished to a shockingly low standard. All of the cards and checkpoint tokens are extremely thin and easily bent, while the components come housed in a flimsy plastic inlay. Combined with the cold grey colours and overabundance of metal rivets (it’s a game about robots, don’tcha know), it makes for a seriously ugly presence on the tabletop.

Robo Rally’s programming heart still beats inside its unattractive metal casing and this version takes the right steps in retuning the gameplay for a modern audience. The issue is that the rest of the game can’t quite live up to the promise, making it hard to recommend over more recent games that have built upon and refined the clever concepts.

The core mechanics and theme remain fun in theory, yet Robo Rally’s return to the tabletop is let down by poor presentation, drawn-out gameplay and an overall feel of being dated. Fans may find a new variation to love here, but it’s otherwise best approached as a historical curiosity rather than a modern revival.