If the term ‘battle-royale’ instantly rings a bell, it’s because it has been everywhere lately. What began as a niche Japanese novel and a film of the same name, in the last ten years has taken pop culture by storm. Now you can wonder about the harm of totalitarianism of Hunger Games, while getting shot by a ten-year-old with much superior aim and hand coordination in Fortnite. Frankly, it is surprising that it hasn’t been as prevalent in board games yet. Perhaps, Reload will change that.

Reload’s backstory is… complicated. There is something about cybernetically enhanced clones, off-world exploration, governmental contracts, training soldiers, a TV show… Look, all you need to know is this: you are on an island, you need to shoot each other. The characters you are playing as are not actually alive, so don’t feel bad for shooting them. Also, if they die, they will come back, although without their equipment. Also, to win you need to earn fame because apparently you are on a TV show… Okay, so even the simplest explanation of Reload is convoluted, but – good news – it gets better from here. 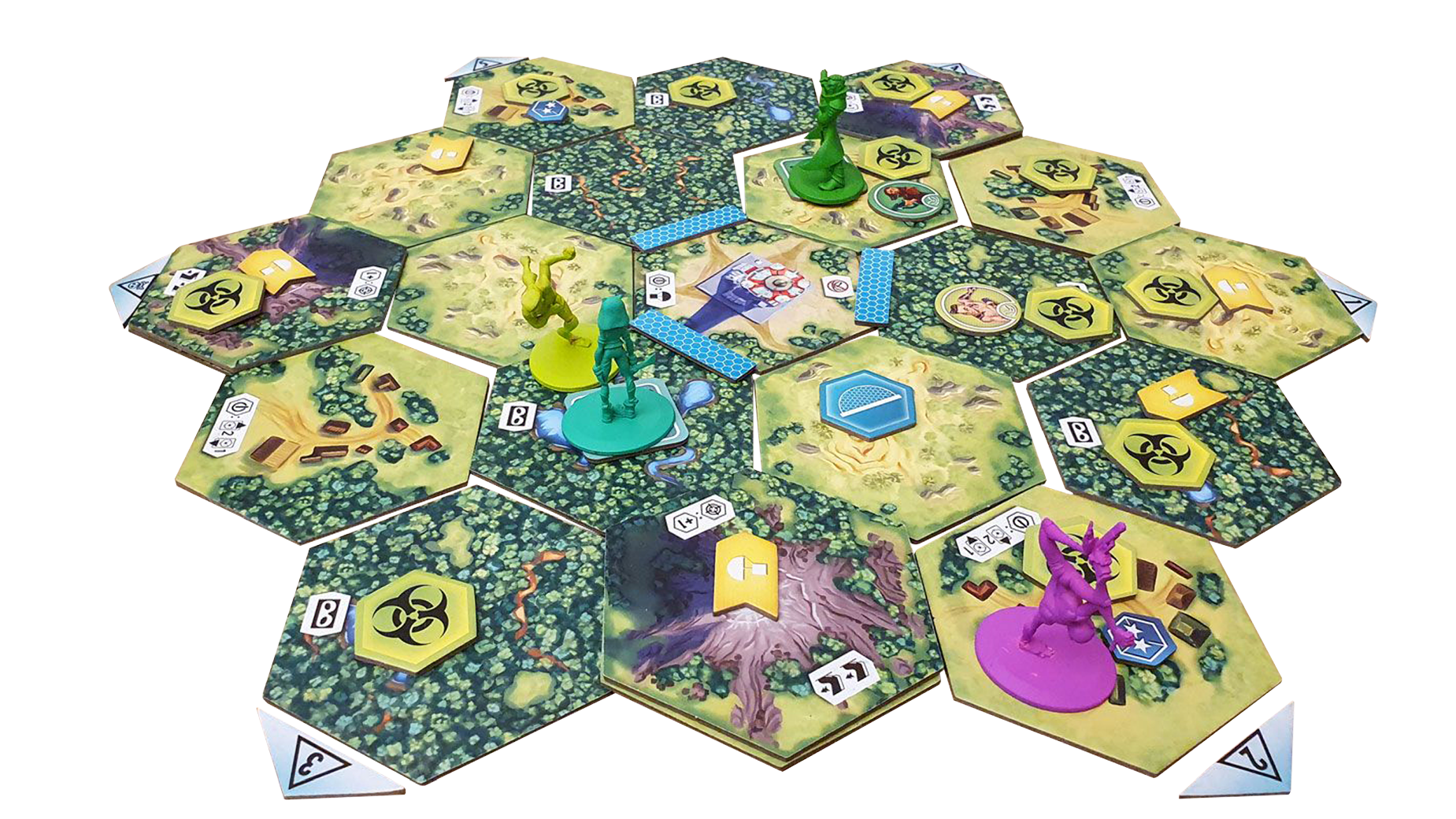 An island that shrinks as the game progresses, parachuting onto the said island and specific locations of weapon supplies are the video game battle-royale staples that have made their way into Reload. However, what really makes Reload interesting is its action mechanism. On their turn, players can move, set traps, loot, heal and, of course, fight. To do so, players will need to assign a die to a corresponding action. The die values are fixed based on a type of action and the same values will later be used for combat, where the highest dice value beats lowest. So, a player who performed low dice value actions such as loot or create traps will be at a disadvantage when fighting a player who performed high dice value actions as move. Of course, the looting player could use their items or character abilities to try to swing the fight their way. However, there is always that dilemma: do you stock up and get better equipment for the next turn, but be more vulnerable to attacks while doing it, or do you go guns blazing into the offensive straight away?

Fighting, of course, will be the central part of the game. Everyone is out only for themselves and alliances are fickle (that is unless you are playing in teams). When you can attack whoever you want, players tend to gang up on one person, however because in Reload you can respawn o the next round, this feels marginally less frustrating. But fighting is not the only way to win. Players have a scoring track where they will slot various tokens earned throughout the game (the first player to fill the track till the end is the winner). Tokens represent different achievements, like delivering a beacon or making an opponent reload, and the size of the token varies depending on how difficult it is to earn. Making another player reload is hard, however these tokens are larger and quickly fill in scoring track, versus needing to collect a lot more beacon tokens to do the same. The scoring track is a great representation of each players’ achievements as well as a simple, yet effective indicator of how close someone is to winning.

Although, Reload brings a lot of interesting mechanics to the table, it doesn’t feel enough of an evolution on the skirmish combat board games to set itself in a genre of its own. Yet whether you are looking for a battle-royale themed board game or are just rearing for a good fight, Reload’s battle arena is waiting for new contestants.

Whether you love them, hate them or just don’t care, battle-royale is here to stay and Reload is giving its take on the genre, which may not be the most original, but has enough interesting mechanics to offer players a good competition.

TRY THIS IF YOU LIKED STAR WARS: X-WING

Fans of board games that centre around skirmish type of combat, like Star Wars: X-Wing, may find Reload’s take on the genre interesting.