Out of this World Review Out of This World is a cooperative game of ordinary teens facing the extraordinary. Everyday objects have sprung to life and the town’s inhabitants are no longer what they seem. Even worse, the adults haven’t even noticed.

Taking thematic and aesthetic inspiration from the Paper Girls and Lumberjanes series of comics, designer Koen Hendrix has concocted a simple but inventive set collection game of misunderstood nineties youth and suburban sci-fi. Through teamwork and youthful enthusiasm, these quirky characters will battle through one of five scenarios, trading and equipping items, whilst fighting off waves of oddly mundane inter-dimensional monstrosities. Whether it’s a demonic bin, bench, or bush, each undefeated foe will eat away precious time, pushing the heroes ever closer to failure.

All of this drama is handled by a deck of cards comprised of era specific items alongside a variety of enemies. Be it a beat up DiscMan or a Nirvana T-shirt, players will be adding these cards to their hand from one of five face up stacks, before choosing to share or equip them. Alternatively, cards can be spent on defeating foes. This process of equipping cards forms the meat of the game and also its central puzzle, with a certain total value of them being required to complete scenarios. Equipping requires playing a set of three matching suits or numbers, resulting in the lowest value card becoming equipped. The same goes for passing cards to other players – albeit with a smaller set of two. This renders high value cards difficult to equip, often resulting in characters throwing away powerful items just to equip a measly pencil. Thanks to the accumulating foes, there's simply not enough time to hang around for those perfect cards, ultimately pushing players toward some disheartening but fantastically tense decisions.

This tension persists through other mechanics too, mostly in the form of the walkie-talkie token. This cute little component indicates the active character but also serves as a reminder that only that player may talk. Thematically, this represents characters splitting up, in a rush to cover as much ground possible in their search for items, but it also adds unexpected layers of difficulty to how and what players communicate. As an added bonus, the walkie-talkie silences the ‘alpha-gamer’, cooperative games’ much maligned repeat offender.

Games usually take around thirty minutes, but the sense of accomplishment felt after beating a scenario can easily lead to immediately setting up the next. It also doesn’t hurt that despite the campaign’s short length, every chapter has a sense of progression in terms of the story and the gameplay. Instead of simply adding more foes, each chapter ups the difficulty by forcing players to focus their strategies. Teamwork really is the key to success and later games will rely on how efficiently the various actions, abilities, and items are used to ensure each character is as prepared as possible. Ultimately, it’s nice to see a light, campaign-based filler game not resorting to basic rinse and repeat style gameplay, instead asking players to, basically, try harder.

There’s a lot to like here, and while it might feel a tad light for some, we can’t really fault a filler game that charms players into ploughing through its entire campaign in one sitting.

Out of This World is far greater than the sum of its parts, drawing oodles of nostalgic theme, strategy, and addictive replay-ability from the most basic of rules and components.

TRY THIS IF YOU LIKED ARKHAM HORROR: THE CARD GAME

Where Arkham Horror thrusts its unwitting players into misery and madness, Out of This World turns down the horror, scale, and complexity for a more family-friendly slice of fiendish fun. 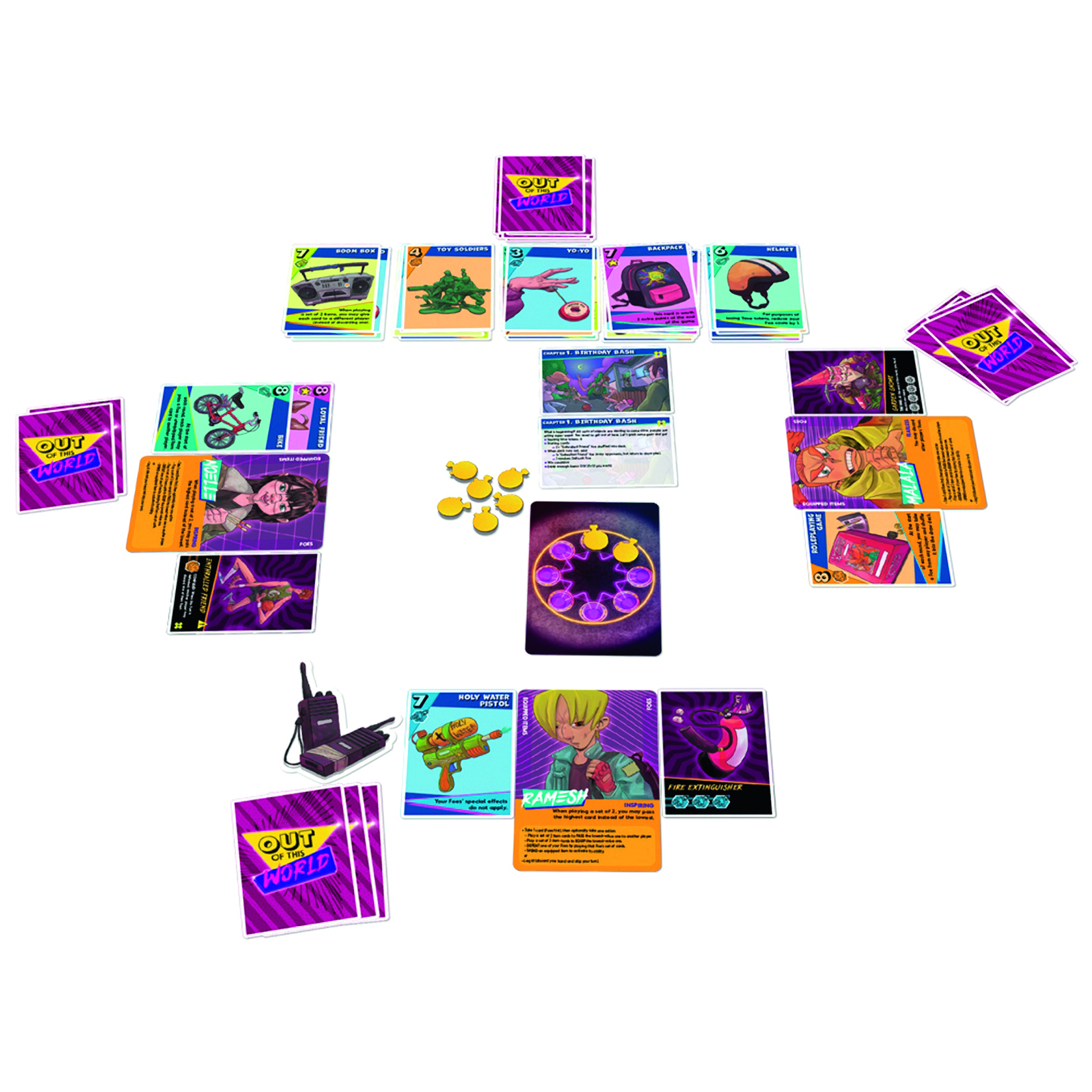