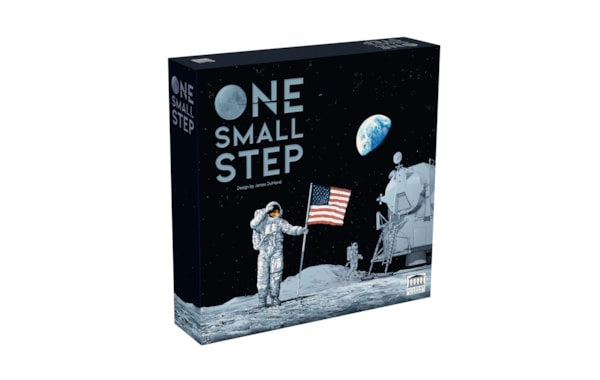 Academy Games are known for making board games rooted in a particular historical period. One Small Step is one of its latest releases which attempts to package the space race between the USSR and the USA in a worker placement board game with resource management and engine building.

As a theme it seems a perfect fit: the setting alone encourages player competition in the clash of the brightest minds racing to get to the moon first. The gameplay then further reinforces this. Throughout the game, players will be gathering resources to launch satellites or manned missions. To collect supplies needed for the mission, they will place their engineer or administrator meeples on different areas of the board, most of which will require a specific work type, restricting players’ options. Of course, as per standard worker-placement rules, in most cases two workers cannot occupy the same spot.

As any trailblazers would know, there will be unexpected complications, making the missions more challenging to complete and the opposing force will also try to sabotage your efforts to get ahead in the race. Finally, you should not underestimate the importance of the media. News of a successful launch could give much-needed benefits that could help with the next mission. 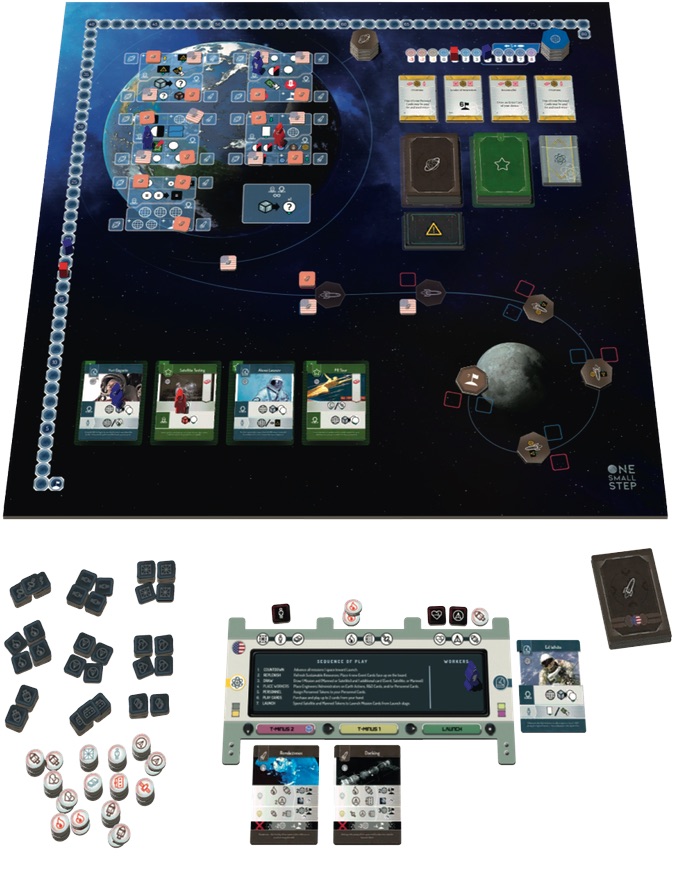 With a seven-part turn sequence, multiple decks and a board subdivided into different areas, One Small Step has a lot going on – again, very much on par with the theme, it is tricky business launching things into space! However, all the different elements of the game come down to one simple thing: resources. You move around the board to get resources. You play event and personnel cards to change one type of resource into another. You move your pawn up the media track to gain bonus resources. Hazard cards will require more resources to complete a mission. Finally, to complete a mission – you guessed it! – you need resources. Rinse and repeat over many rounds with little changes and the game loses any oomph its theme has given it.

Furthermore, resources are pretty easy to get. There are so many options to get what you need that completing missions never feels like a struggle or a challenge. The only way to fail a launch mission (and receive a negative consequence because of it) is to simply not pay attention. This means that there is never a real sense of urgency in the game, like the need to rush to that one good spot on the board or the feeling of frustration when an opponent sabotages you.

However, where One More Step excels is at capturing the history of the time. Even through placing little facts at the bottom of each card, the game begins to build a bigger picture of the period mission by mission. The historical photographs also fit perfectly within the overall aesthetic of the game. If players want to learn more, the back of the rule book has a couple of pages dedicated just to re-telling the history with a very nice timeline of the events. However, it does feel weird that you can re-write history by making USSR reach the moon first, or by drawing USSR astronauts to use in USA space program and vice versa. It is strange that after recapturing elements of the history so carefully, One Small Step then breaks the immersion during the gameplay.

Despite its theme and peppering of interesting historical facts, One Small Step is let down by its gameplay. As a worker placement game, it is entirely functional and can on occasion present a challenge (especially if using the advanced version of the board), but it is also quite dry and repetitive. In the end, this is not a giant leap for worker placement games, I am afraid.

One Small Step leads strongly with its theme, but falls flat with its gameplay. Its strong historical base is undermined by some strange gameplay decisions that change the history that the game aims to celebrate.

TRY THIS IF YOU LIKED LORDS OF WATERDEEP

Thematically, these games are from different universes, but One Small Step in many ways follows Lords of Waterdeep worker placement and resource management formula, although it lacks the evolution of the game board or the drama of the scoring reveal.