Assembling your own miniatures for a game doesn’t often involve play-dough. Neither does destroying an enemy minion usually mean satisfyingly crushing it where it stands on the table. But then, those games aren’t Necromolds.

Necromolds is a playful wargame of creating play-dough monsters using ‘spell book’ moulds, and then using a dice allocation system to have them trudge towards the enemy and attempt to squish them. The dice allocation means rolling the dice, and then applying them to each monster type in your roster – you might decide that this turn you’re going to move your Grave Ghoul and do a ranged attack, so place a movement and attack dice on that monster. Then you take those actions for all monsters of that type, before the opponent gets a turn to activate one of their monster types. Special power activation, and the use of gems to buy more dice in combat rolls make for some actual interesting choices that still leave you with dice-chucking fun.

Combat is deadly – everything effectively has one hit point, so if you hit your opponent’s monster with a single shot you get to splat them with the ‘caster ring’. If it’s melee combat, and if you lose (even if you’re the aggressor), your monster is smushed. All attacks are more or less opposed rolls – roll as many combat dice as your attack, and the defend rolls as many dice as their defence. More ‘hits’ on the dice than shields means you win. Splat.

It’s extremely novel to make and destroy miniatures at the table (creating terrain when they’ve been crushed) – and many will already know everything they need to know before heading off to buy the game. But is it good?

Yes. Yes it is. The minis you create are surprisingly detailed. The ‘spell clay’ has a very high-end feel about it (for playdough) and the character design is good fun. The only downsides to the game are the longer set up time (you do have to make your own minis at the start of the game after all), and there is a somewhat predictable ‘move forward then hit them’ arc to games. But both of these complaints ignore the flexibility at the heart of it – it’s a game that asks you to expand upon it. Add optional rules (exploding gem/dice are a good one), or head off the provided game board into bigger terrain. Grab some other playdough stuff (Bohaty has encouraged people to use whatever works best and most cost effective for them) to make bigger armies, or even paint them. The expansions – in the form of extra and more complex monsters – are something you’re going to want to pick up. Each box contains two new monsters, some spell clay, and a ‘mystery’ caster ring, and simply expands the range of options in front of you. Maybe you can add in more complex monsters, or change up the composition of your army. Everything about the game has this joyful ‘toy’ feel to it, while you’re still effectively playing something akin to Warhammer 40,000 (but with more lurid colours).

This is one of the most satisfying ways to come back to wargames (assuming you’ve been away) – because you can do it with the whole family. It’s tactile in a way that other games simply can’t be, and underneath all the novelty is a sometimes silly, but always fun, game of monster smashing.

Exactly the introduction to wargaming we wanted it to be. Novel, exciting, swingy, and taking itself exactly as seriously as you’d hope, Necromolds offers a brightly coloured way into the hobby that brings borderline childish delight to the table.

TRY THIS IF YOU LIKED Cosmic Frog…

Bombastic combat wrapped up in an incredible aesthetic? If you’re looking for the more accessibly version of the recent frog wrestling favourite, look no further. 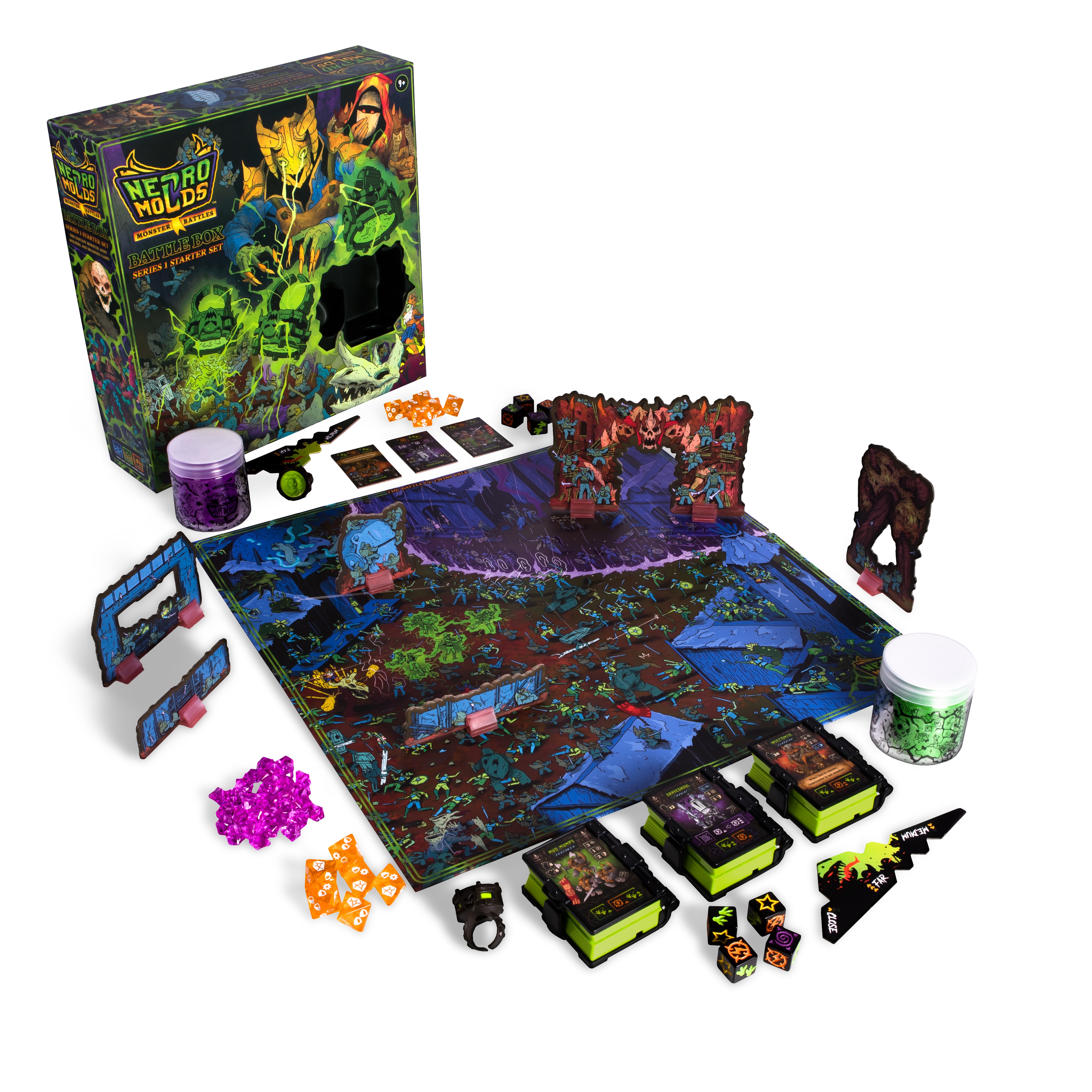 Got to agree with the other comment, if it can only be bought in the USA, why is this published in a UK mag's games of the year ?! Baffling. If the game's publisher reads this - get int'l shipping sorted. :)

This game sounds great but after reading the review tried to order it for a christmas present only to find you can't buy it any where except the main website which doesn't ship outside of America, seems pointless to review something that you can't buy.