Mountains out of Molehills Review Tunnelling is a mucky job, but someone has to do it. In this case, we’ve got a few moles looking to claim the most victory points for creating the biggest molehills. Mountains out of Molehills is an interesting mix of area control and action programming, all wrapped up in an incredibly neat and accessible package.

It’s a board-in-the-box game where the lower level (underground) where the moles do their digging is complimented with the above ground area (supported by four corner struts above). Usually, this sort of game inevitably leads to comments of “it’s a bit dark on the lower level” – but of course, here, that’s just bonus theme.

Players take turns picking a bunch of movement cards from the shared market and then forming them into a little pre-programmed pile. Then, one by one, each player turns their cards over and hope their movements are uninterrupted by a rock, or another mole. All of this movement is in aid of adding stackable molehill pieces to the aboveground section – each space you move into with your mole below adds a piece to the bottom of the molehill above. This shows that you as a player own it, and when it comes to scoring you’ll count all of the pieces in the stacks you own, and add those points to your round total. 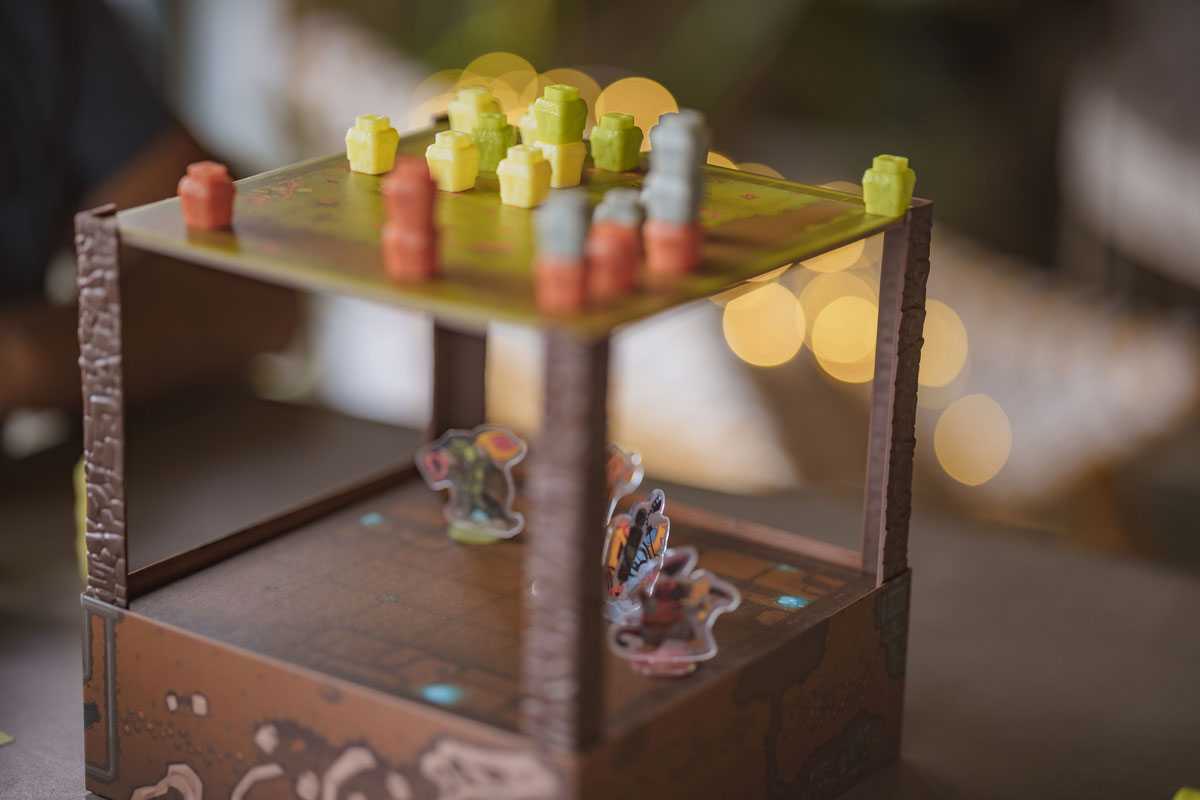 As you would expect, with the blind programming of movement and the nature of claiming one another’s stacks as you bimble around underground creates amusing moments. The moles walking into one another (stopping, politely, because moles are nice like that) or aimlessly walking into a wall after getting turned around by bumping into a rock. This rock feature – a card you can play to place a rock and roll the rock dice – does a lot of heavy lifting for a game that’s got such a cramped floor space. Players roll the dice and that determines which way any mole bumping into it will turn. Strategic placement for yourself for others can be the difference between a sweep of massive points for you at the end of the turn, or an embarrassing turn of staring at the wall. There’s also a toppling mechanic that spreads out molehill pieces across the board if the mountains get too high, or a player intentionally topples it.

This silliness creates the feeling of playing an abstract game using rubber chopsticks or a wargame one of those claw machines at the seaside. You’re a little removed from what you intend to happen, and as such, there’s a kind of ‘wind-up-and-let-go’ feeling to the game that we love. Action programming that everyone can play? Dig in!

Accessible, silly and smart all at once, Mountains out of Molehills brings action programming to the family games table in amusing style. A molehill worth scaling.

TRY THIS IF YOU LIKED RoboRally…

Richard Garfield’s Robo Rally asks you to race robots using a bit of card-based programming. With luck you’ll end up a winner rather than on the scrap heap.