The grip of the all-powerful Lord Ruler is becoming tenuous. Troubles are multiplying and threatening the delicate fabric of your dystopian society. It falls on the shoulders of you, the favoured heads of house, to overcome the obstacles, defeat the heroes and uphold the empire. Sharpen your talons, this is going to get nasty. Mwah ha ha! 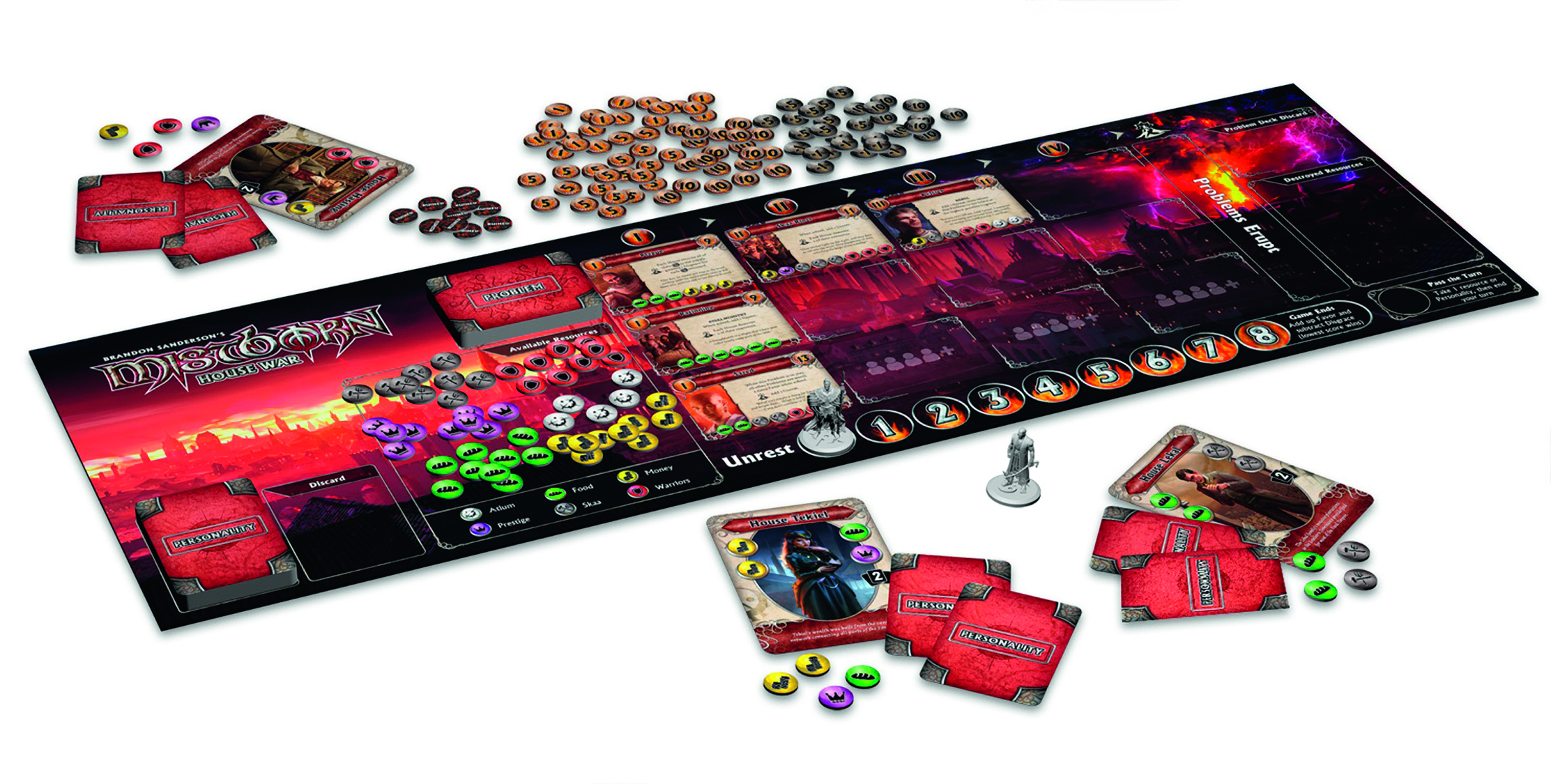 Mistborn: House War is set in the world of Brendan Sanderson’s Mistborn trilogy. Anyone can play the game, but fans of the books are the real audience. Players must attempt to solve a series of problems, each shown on a single card. Cards are placed in four columns on the board, with the left-most column containing the least concerning problems and the right-most the most urgent. Every turn, current problems worsen (by moving to the right) and new problems are added. If a problem remains unresolved for too long, it will erupt, triggering an effect, such as disgrace (negative victory points) for a player or an increase in unrest.

It’s rare that a problem can be solved by one player alone; instead each one requires negotiation between players in order to amass the necessary resources. In fact, while there is a little bit of card and resource management, this is really a game of pure negotiation. Mistborn is the antithesis of a cooperative game, but you need to cooperate and form agreements to solve problems. Alliances will be forged and then decimated; players will be wooed, manipulated or bribed, then stabbed in the back a moment later. You can bargain with resources, points, cards… anything, in fact. You can promise to do the washing up for a week in order to land a deal, though you are, of course, inherently untrustworthy. Players who excel at manipulation and relish in being mean will love this game.

Personality cards can be played to reduce or increase the resources required to solve a problem. But beware the sweetly generous and eminently reasonable player who wishes to help without getting much in return… their innocent smile will morph into a crafty smirk as they brandish a destructive card and swipe all the favour or shower you with disgrace. Personality cards can be very powerful, giving the game huge and unpredictable swings.

Play is erratic and it’s hard to feel in control of your own destiny. There are diametrically opposed win conditions. If the empire holds, the player with the highest points wins, but if the empire falls, the player with the fewest points is victorious. This sounds interesting, but in reality actively trying to collapse the empire means refusing to negotiate in order to trigger eruptions and thereby absenting yourself from much of the action. It’s more likely that as it becomes clear that the Lord Ruler’s reign will fail, players change tactics in order to reduce their points in the final turns. But points are hidden, so trying to control your score in relation to others feels like shooting in the dark. In fact, it’s very easy to become completely ambivalent about the outcome, particularly towards the end of the game.

You can determine the length of play by how you construct the problem deck, but even the short game is still too long, and with higher player counts there’s even more negotiation, slowing the game down further. It’s repetitive: each turn is dominated by similar negotiations and identical personality cards. There’s too much text on the cards and it’s really hard to get a sense of the board at a glance because of this.

If you enjoy heated discussions, blatant exploitation and more than a little uncertainty, you’ll probably enjoy Mistborn: House War. But this is a game that relies on a single mechanic and if negotiation isn’t your thing, stay well away.

Play this if you liked: Chinatown

Both games have negotiation at their heart, though Chinatown’s tile placement and area control are more far interesting than Mistborn’s plain points grab.