Life is a meeple rollercoaster

I think I can say, without a doubt, that everyone has wanted their own theme park at one point in their lives. It could be a childhood fantasy, an actual career goal, or just a recurring dream that always makes you late for work. The desire is so prevalent that games have been trying to sate it for decades. From the ancient Theme Park World video game to Funfair, Trool Park, Imagineers, or Roller Coaster, designers have been trying their darndest to bring that joy to you. And while the Board Game Geek ratings for theme park games rise and fall like a rollercoaster, publisher Blue Orange has bravely stepped up to try their hand with Meeple Land.

Starting with a blank field you’ll take it in turns to buy rides, toilets, food stalls, and gift shops to build your park. Each ride and service has its own unique path layout on it which requires clever planning as dead-ends will cost you points at the end. At first, this seemed like it would be easy to avoid but by the third round the challenge really ramped up as the tangle of paths grew exponentially with every funhouse and dodgems that were fed to it. Coupled with the needs of certain rides to have gift shops, bathrooms, or food stalls adjacent to them, Meeple Land quickly becomes a deceptively strategic game. 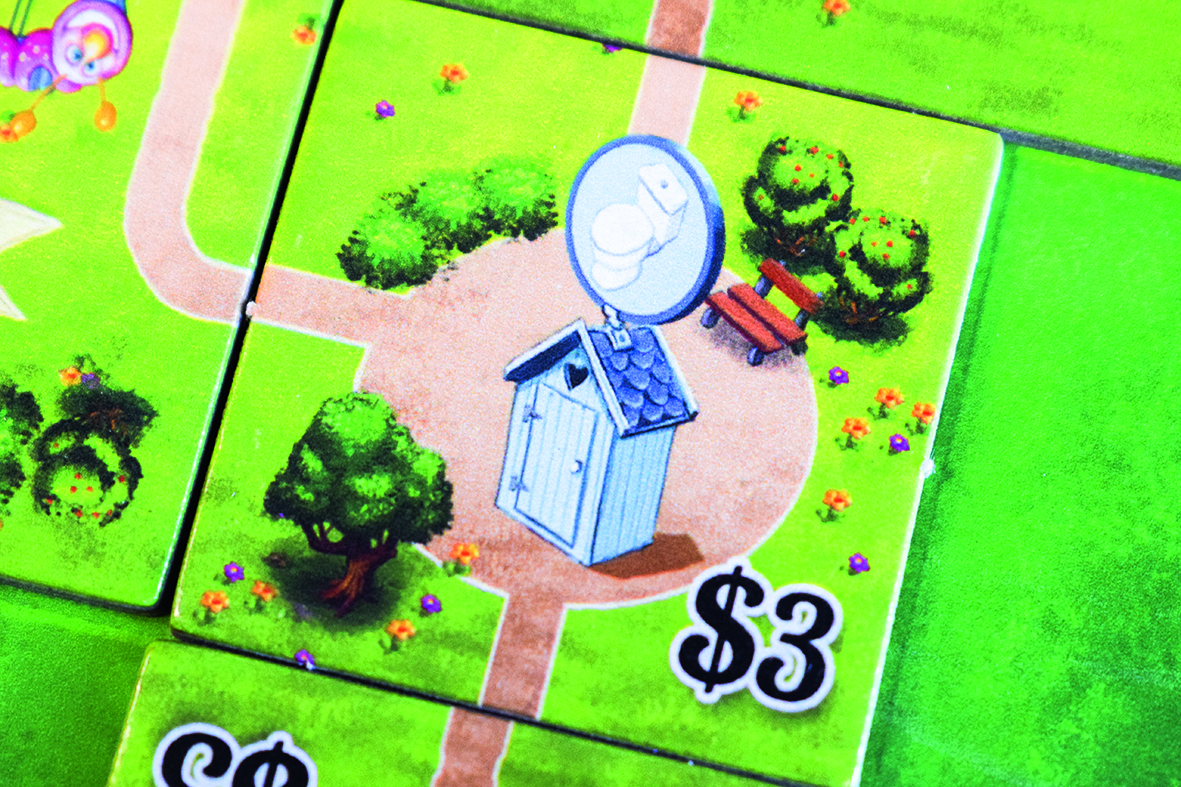 At the end of each round, players choose a bus from the central parking board. Each bus has a different number of coloured meeples on it and each ride you have can take a certain number and colour of meeples (which sounds kind of suspect but let’s not get into that right now). Your Ferris wheel might be able to take two blue meeples and an extra yellow meeple if you have a toilet attached. If you have those meeples in your park at the end of the round, you get cash for them. And at the end of the game, you get one point for every blue and green in your park and two points for every pink and yellow, because we want to attract the right type of clientele, understand?

I’m being facetious of course. As much as I rail against the concept of premium visitors, it’s just a subtle way of driving competition between players. Rides that cater to pink and yellow meeples are inherently more valuable, but only if you can secure those visitors at the end of the round. If not, you’ll have to turn to advertising to draw them in and while it can help bring those much needed meeples, you might find yourself leaving others at the gate.

Mechanically, Meeple Land is great. Competition is driven in subtle but clever ways without ever needing to descend into blocking or frustrating each other. Heck, if you’re playing with someone who simply can’t stand the passive aggressive nature of Eurogames, you could quite easily stay out of each other’s way without changing any rules and that’s really nice to see. Especially as the pieces are too nice to see flying through the air. Those colourful little meeples and vibrant ride cards are so nice to have all set out on the board but what really makes the game for me is the park entrance. Two marble-effect podiums with a meeple at the top holding the Meeple Land sign and while it’s a shame we don’t get to have our own park names, the quality is top notch across the board so I’ll let it slide.

While you don’t get to launch visitors off of unfinished coasters, you still get to build a theme park and that’s awesome.

TRY THIS IF YOU LIKED: UNFAIR
With a lot more of a focus on management and underhanded tactics, this thematic cousin has a wonderful sardonic humour that anyone who has seen behind the theme park curtain will appreciate.