Sometimes being good is enough. Too many board games boast about how their mechanic or innovative new system redefines what it means to roll dice or draw cards, when in actuality their design is often reinventing a wheel that’s been rolling along the industry for several decades. It’s often just as refreshing to play a game that takes a core concept found in board games and delivers a charming hour of fun as it is to play a radically new design. It’s that cosy, comforting experience that Luna Capital greatly delivers.

It’s the year 1977 and humanity has finally started living on the moon (and about time too) Players have 12 rounds to build the greatest settlement on the moon to be crowned the new Luna Capital. Each round sees players choose from one construction card and the project tiles beneath it. They must then play either that card or one of the others from their hand, followed by all project tiles onto their settlement on any empty spaces (even if they’re on cards played earlier.)

Most construction cards will have four spaces to lay out projects, often with one of them already occupied with a meteorite (which score points if you have more than any other player) and lunar scaffolding areas (which are used to build combo-scoring construction projects.) The majority of projects ramp up in points if matching projects are adjacent to each other (or surrounding specific construction projects), rewarding players for careful placement and forward planning.

Each construction card is numbered from 1-10, you cannot play numbers in the wrong order in a row (i.e. no 8s on the right of a 7) and are limited to three connected rows. Whilst restricting you from churning out perfect positional cards, the limitations are not as intimidating as they first appear, still leaving plenty of room to arrange your settlement effectively  – helped greatly with robots, special tokens earned from some projects which can be used to ignore a card’s numbers whilst its placed.

The game is split into three phases, with each new round in the phase increasing the number of project tiles which need to be played. This creates an ebb and flow of placements, giving players time to spread out more construction cards before their settlement is swamped with projects. 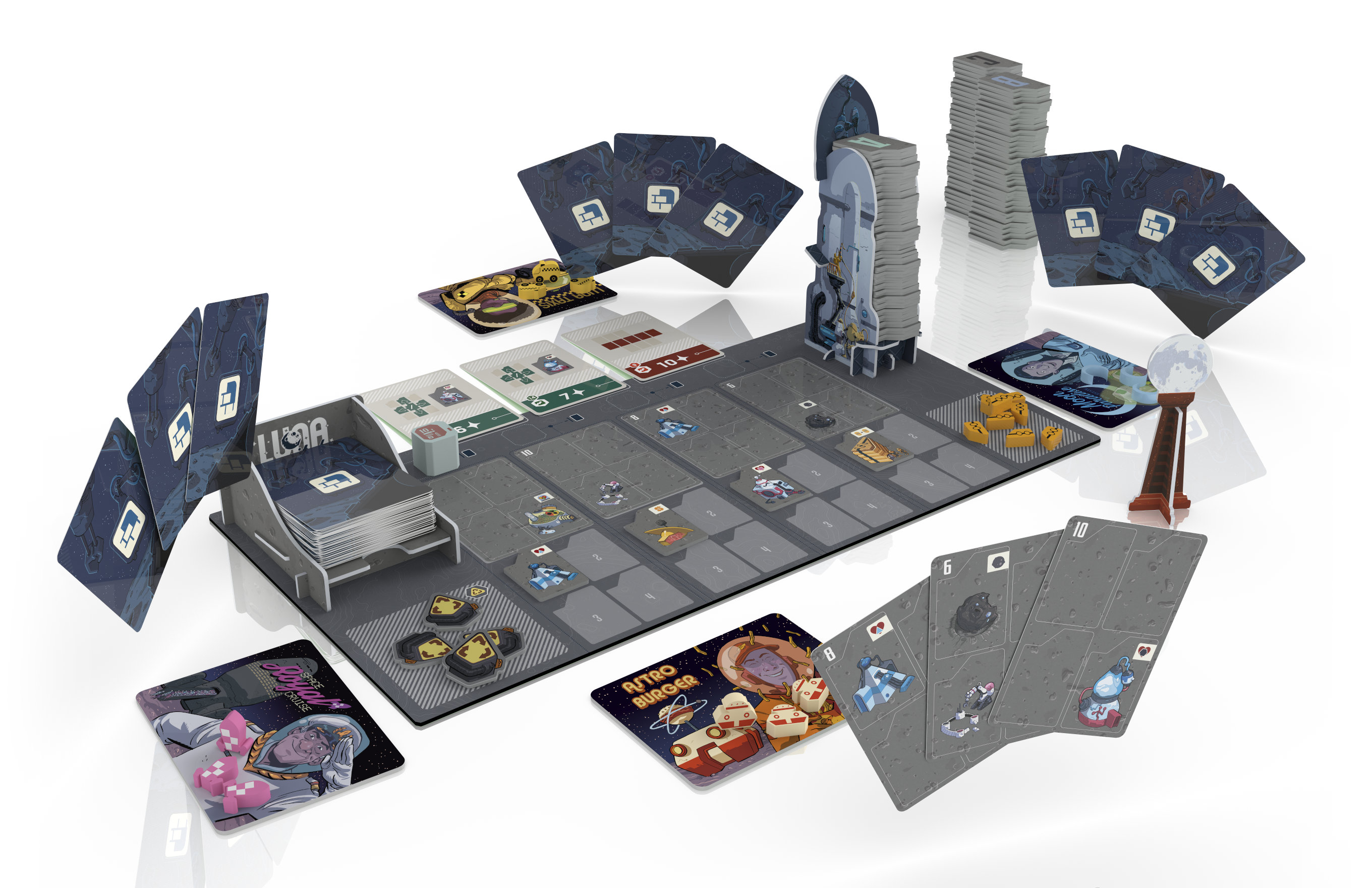 What elevates this game and significantly adds to the enjoyment is the production values. The art is lovingly rendered classic sci-fi, with bright illustrations against the moon’s grey palette, also the cardboard rocket for holding projects and cards is easily the most straightforward and satisfying cardboard models I’ve made for a board game.

The only major gripe I have with the game is the lack of player interaction (outside of the classic ‘Oh I took the thing you wanted’ moments that are rife in tableau/tile placement games), often meaning that it isn’t until the final score when you’ll pay much attention to what everyone else was doing, leading to downtime as players must deliberate their own turns whilst patiently waiting for others to do the same on their go. Thankfully, the game also includes a brilliant solo mode, where the solitaire-like structure of the core mechanics works perfectly with an AI throwing space spanners in the works to keep you thinking.

There’s still a lot to like with this game’s economical and environmentally friendly design (not a plastic token or inlay in sight) and the speed of play it never outstays its welcome. If you love to build a city tile by tile and enjoy forward thinking puzzles, this game is certainly a capital idea.

A charming puzzle with a great look, an easy purchase for anyone looking to add a new tile-laying delight to their collection.

TRY THIS IF YOU LIKED: Suburbia

Both are city building games that find their own way to balance your growth and force you into making moves that will impact your entire game, whilst still finding a lot of fun in snapping together the perfect settlement.

Pick up yours here