If ever there was ever a game that highlighted the fact that the designator of quality is the mechanisms and not all of the frippery that is laid on top of it, it’s Libertalia. I hate everything about this game apart from the game itself and that, well, I consider it to be brilliant.

The previous version of this game sought to marry mechanisms and theme by drenching it in art that was all grog and grime and sex and mischief. What Stonemaier has delivered is an utterly inoffensive package that has more in common with Dora the Explorer than the rambunctious denizens of Tortuga. The whole package, from the Opal Fruits tokens to the half arsed frogs in trousers dancing along the main brace screams of the kind of blandness that seeks to appeal to everyone and achieves the exact opposite. The packaging is fundamentally at odds with what the mechanisms of the game are conveying.

And it is utterly inconsequential because these mechanisms are what games should be. 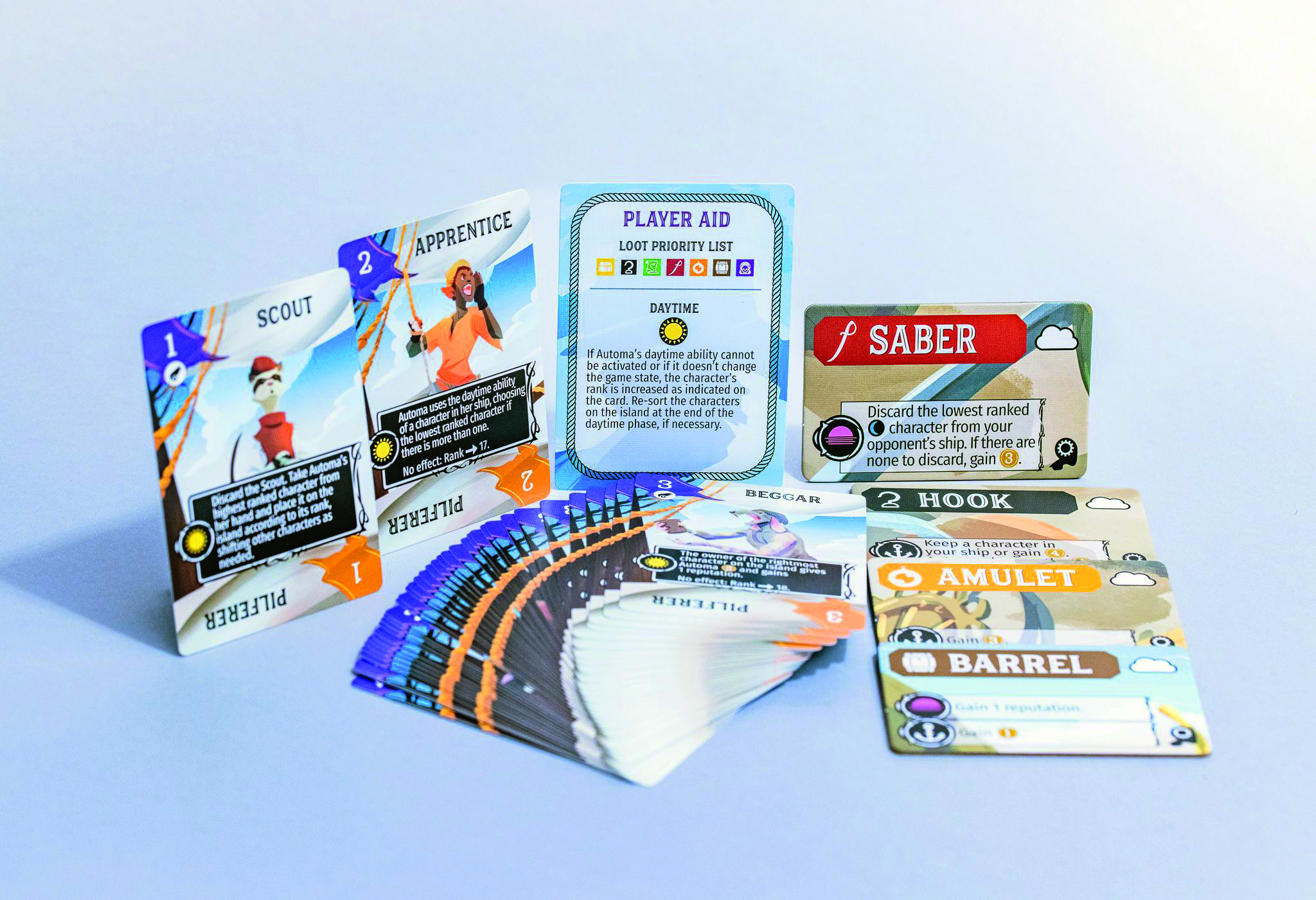 Libertalia is a game in which players draw the same hand of cards, all of them having devilish special powers, and seek to outwit their opponents by choosing the right time to play them. Time it badly and you could be kicked off the ship but time it well and you can galumph off with all the booty.

Each player has their own deck and one player shuffles, they then draw their hand announcing the numbers to the rest of the players, who draw the same cards. In the first round six cards are drawn and four will be played. In the subsequent two rounds an extra card will be played each time but the same amount will be drawn. This results in cards carrying over from round to round and, slowly, the player’s hands diverge from their original symmetry. On each turn a single card is played and revealed, with the highest played card able to take the available loot first, it is here though where the action happens.

Powers are resolved low to high which means that your formerly winning card could be kicked off the boat or you may be forced to give the lowest played card some of your money. There are no end of mischievous unintended consequences that can ricochet around the table drawing laughs, gasps and vows of revenge.

There are two sides of the board, the calm and stormy. The stormy side of the board is the most fun that can be crammed into a deck of cards. This is a game with interaction at its heart and the unintended consequences of each card play are myriad and hilarious.

The mechanical changes in this version, the reputation track is an example, are great improvements to the original design and add more strategy and bite to the gameplay. This is a reprint ten years in the making and just how tight the game is and how the new roles mesh with the old ones is a testament to Paolo Mori’s gifts as a game maker.

I was ready to hate this new version of Libertalia and while I lament that publishers care more about mass appeal than verisimilitude, no amount of bland and childish art can dim the brilliance that shines out from this design.

This game vastly improves on the original and you will find yourself playing it again and again.

TRY THIS IF YOU LIKED Glory to Rome