Things that go smash in the night

Special editions of games often draw funny looks. Whether that’s because of the way Kickstarter has created a spectrum of game versions, or just the idea that a publisher is after more cash for its best loved titles, the player picking up the game is right to worry that their favourite is about to be put on a Monopoly-style production line.

But we don’t have to worry about that here. King of Tokyo: Dark Edition is an extremely nice reworking of the original hit Richard Garfield game with brand new art and a few additional rules too.

Starting with the way it looks, Dark Edition is simply more handsome than the cartoony original, in this reviewer’s opinion anyway. The art takes a darker and more electric direction, and while there’s little fundamentally different with the character design, small touches make the whole thing feel a little more refined. 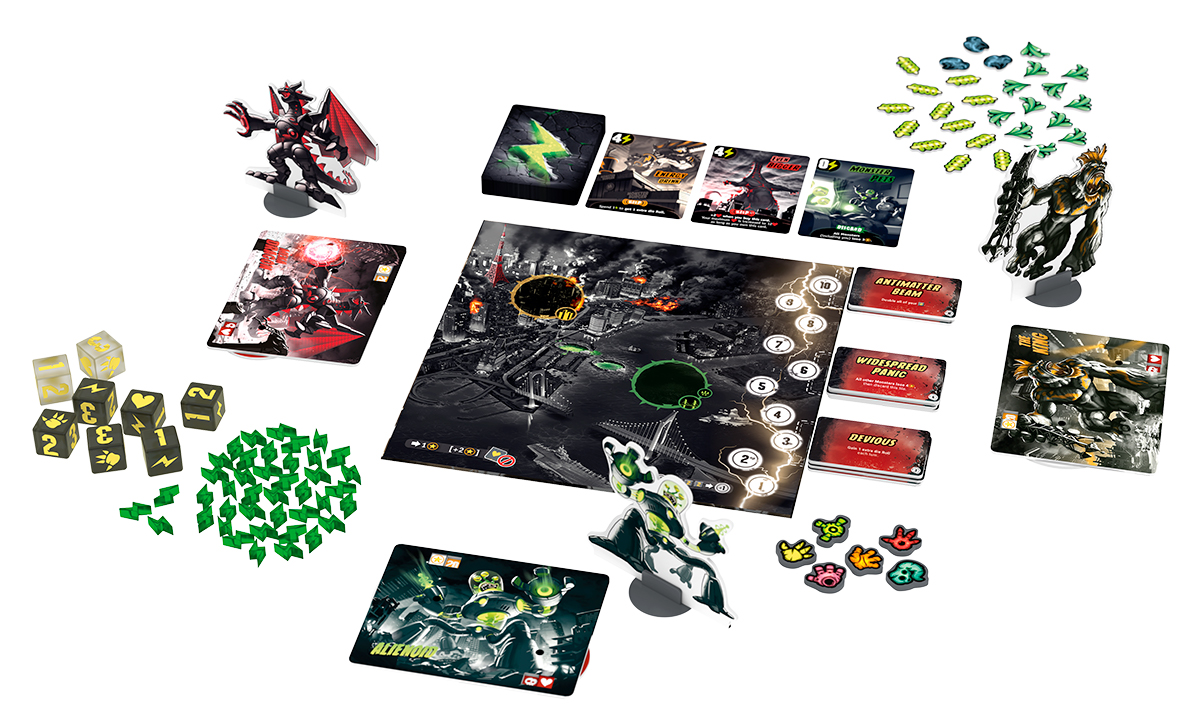 Other improvements include the attractive and slightly over-large ‘frosted’ dice, which are a pleasure to roll. Which is mostly what we’re doing here anyway. At its core King of Tokyo is all about rolling dice, keeping the useful ones and rerolling the less useful ones. Rolling triples get you victory points and rolling ‘smash’ or ‘energy’ dishes out damage or provides you with the game currency. If you’re in the city you can’t heal and your attacks hurt everyone outside, and outside the city you’re going to be doing damage to the monster currently on the throne. Grab a few powers from the marketplace to make things more difficult for your opponents and you’re well away to becoming the giant monster monarch.

So far, much the same, but with Dark Edition a new set of powers is opened up. As you roll triple ones and twos you will accrue ‘wickedness’ points that move you up a track. As you progress past one of the three thresholds, dark powers will open up for you. These can be the simple, but useful ‘gain an energy’ or ‘heal for one at the start of your turn’ at the bottom end, through gaining extra dice, up to, at the top end, generating extra energy and healing for whatever your roll.

King of Tokyo has always been a very good for its ‘take that’ elements – and some of the additions here give you more of that to take. Some wickedness tokens knock whole swathes of points away from your opponents. It’s not been made a nastier game by any means however, for those who remove the shrink ray cards from their games (good advice for those who don’t like to see hope evaporate from their friend’s faces) there’s nothing as rough as that added.

As special editions go, it’s one worth shining a light on as the tweaks make it just enough to elicit interest from fans, and is certainly the version you’ll want to pick up if you’ve not already got a copy of the game. ∗

If you don’t own King of Tokyo already, and you can get hold of Dark Edition, this is one to get – but only the die-hard fans need to replace their copy. A great update to an already great game.

TRY THIS IF YOU LIKED King of Tokyo…

Because that’s what it is, bar a few tweaks. It’s very much more of the same,
in a much nicer package.