A familiar feel with a sci-fi coating

When in 1964 Nikolai Kardashev devised a hypothesis for measuring the technological advancement of civilization on a cosmic scale, he could hardly have imagined that this concept could be packed in a modest-sized board game box and explored through the mechanics of rock-paper-scissors. Yet here it is, in Kardashev scale, neatly presented in three rows of cards, one for each stage of advancement: planetary, stellar and galactic.

In Kardashev Scale, players will be building their civilisations by purchasing cards from the central pool until all their cards come to or above the 25-victory point value. It is not dissimilar to how you build up your civilisations – although less galactic and more ancient – in 7 Wonders. The first planetary level, akin to the first deck in 7 Wonders, offers cards that help set up the game’s engine, generating resources and other bonuses, so players can afford higher priced cards later. The analogy to 7 Wonders continues, with the next two levels: stellar, which has more expensive cards but offers useful abilities and, finally, galactic, where each card will cost you a pretty penny, but will give plenty of victory points in return. Unlike 7 Wonders, however, cards from every level are available to all players from the start, so those eager to advance don’t have to wait for the lagging behind civilisations. Although it is unlikely that players will aim for galactic level cards right from the beginning, it helps to see what is available early on to plan. 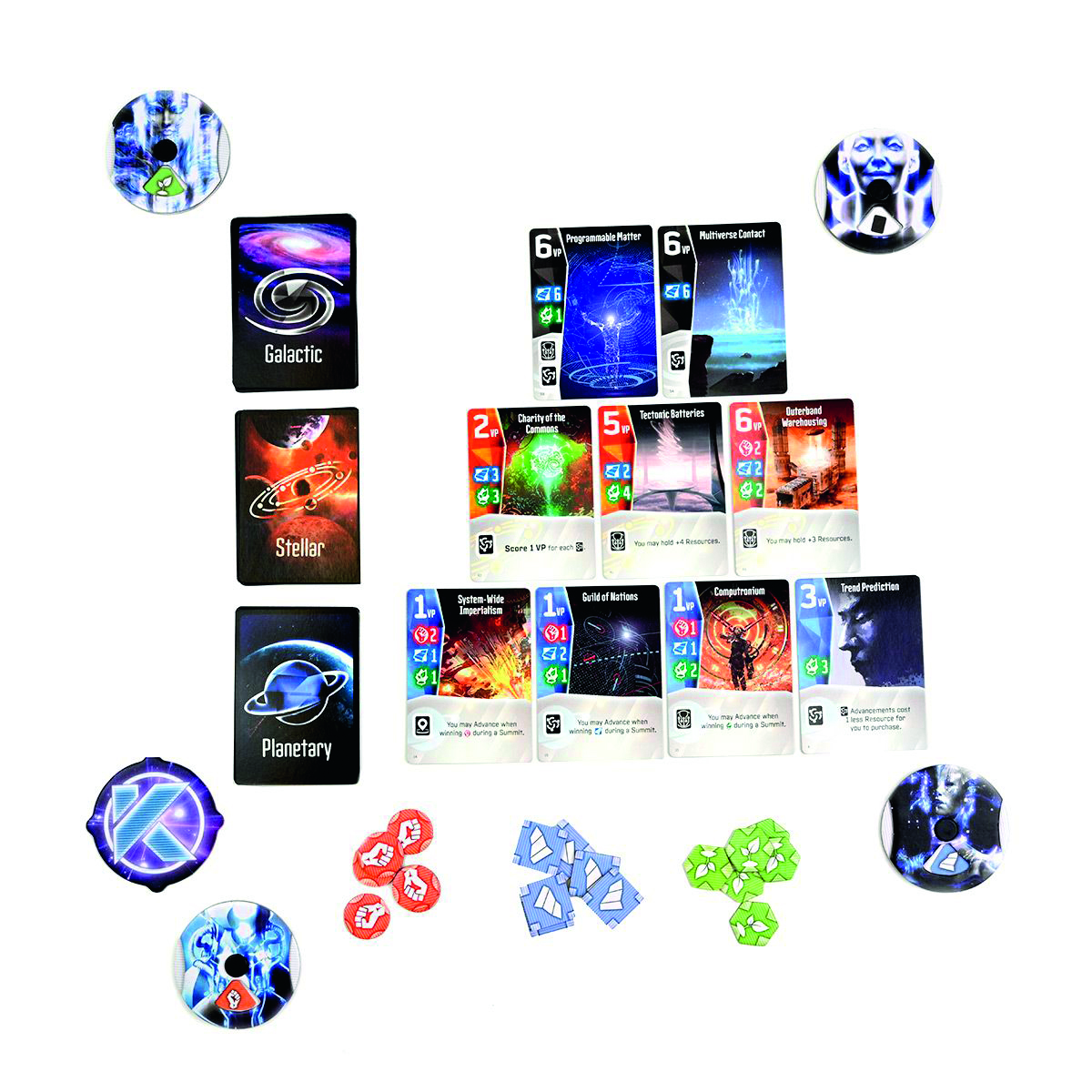 Yet before players can buy any cards, they will need to gather resources, which is done through a little game of rock-paper-scissors, only here it is thematically re-named as conflict-trade-research. Don’t worry, symbols for each resource resembles the original rock-paper-scissors closely enough so you won’t have to remember that conflict beats research. Each player has a dial, where they will secretly choose a resource, which they will then reveal and compare with their neighbours to their right and left. In a two-player game there will be only one person to compare to. If your resources beat the opponents’, you get two corresponding tokens, if you tie, just one, and if you lose, nothing. Outmanoeuvring both of your opponents’, garners a whole four tokens, yet, if luck is not on your side, you can also walk away empty-handed.

It is a curious resource-gathering mechanic that initially is quite successful, but as the game progresses begins to show some cracks. At first, it is an efficient way to gather resources quickly. It is very unlikely that you will walk away from the match up with nothing, and even if you do, that won’t happen every round as your neighbour will eventually select the ‘purchase card’ option which grants them an automatic loss in a matchup. That is, unless you are playing two-player. Here a couple of losses could result in your opponent speeding ahead, as they will be able to nab the best engine-building cards from planetary level, that will give them the boost to advance further.

At the beginning of the game, it is possible to predict what the opponent is going for by looking at the available cards and what resources they already have. The initial match ups are a mixture of deduction and mind games, making each reveal exciting. However, as the game progresses and resources are plenty for everyone, there is no way to predict what the opponents are going for. The dial is just a turn of luck, and now it slows the gameplay down because you want to focus on buying cards.

The resource dial is both the most interesting and the most flawed part of Kardashev Scale. It is fun at first, setting its gameplay apart from many other drafting games. Yet it also stagnates the game’s flow, taking away from fast-paced card play.

Rock-paper-scissors and card drafting are hardly the innovative mechanics, but when mixed together in Kardashev Scale they create an exciting, if somewhat flawed gameplay.

TRY THIS IF YOU LIKED 7 WONDERS