There is a mutant problem in Hard City making life in it increasingly difficult. The local police department have assembled their best and sent them to the city streets to kill mutants, save civilians and perform other heroic feats.

If the use of pink-glazed donuts as action points for police officers didn’t immediately give it away, Hard City does not take itself too seriously. Inspired by the action B-movies of the 80s, it is colourful, over the top, full of silly puns and clichés that refer to the movies, music, comics and other arts of the era. Unlike other games in the genre, like Zombicide, which carry a more serious, grittier façade, the sense of humour of Hard City firmly sets it aside.

The mention of mutants and a comparison to Zombicide, immediately sets an expectation of how Hard City will play, and it is not wrong. Played through a series of scenarios each with a unique set up, the game takes place on modular boards that form the current location. The officers traverse the grid on the board completing various objectives and killing mutants through very straightforward dice combat: you roll two dice – two hits kill, one hit stuns.

What sets Hard City’s gameplay aside is the inclusion of three different modes of play, especially its one versus all mode, where one of the players takes on the role of cacklingly evil Doctor Zero against other players. Doctor Zero has a special deck of actions and, of course, all mutants at his disposal, which makes the lives of our four good cops quite complicated, keeping the gameplay neck-in-neck until the very end. Although the Doctor’s abilities are very powerful, the cops’ strength is in their numbers and teamwork. There is no timer on the deliberation between players, so it can be quite frustrating for the Doctor player to wait while others discuss and make their minds before they can finally take a turn. Doctor Zero also features in the cooperative and solo modes, although it is replaced by an AI deck instead.

Each round, if cop players set up their actions just right, they can perform a special scene card. A one-off ability that aims to add a cinematic feel to the game. As a game element, it is quite fun: making players orchestrate a set of particular moves for a great pay-off. As a theme element, it confuses things. Is Hard City a board game about a movie about the mutant invasion of the city? Are the cops actually actors in an 80s apocalyptic movie? Or is it a movie about those cops… then made into a board game? There are either too many levels of meta here or an 80s inspiration taken one level too far.

Hard City also follows a trend of many recent Kickstarter board games: a fairly pricey, miniatures heavy, core set that acts as a teaser for extra content you can buy. Hard City goes as far as putting ‘To be continued…’ at the back of its rule book, teasing extra available content. The base game consists of only five episodes (that can be played across all modes) and one boss mutant, perfectly set up for more of each in other expansions. On its own there is nothing wrong with expansions, however, it does feel like the content and the replayability of the base game were restricted to make the other bits you can buy feel more enticing.

For the less cynical, neon lights of Hard City are beckoning. It is not the most complicated or strategy heavy game, but it can still offer challenging and tight gameplay, especially with its one versus all mode. We all could do with a bit of bright colours, humorous artwork and unabashedly outlandish humour every now and then.

With its colourful 80s aesthetics and cheesy sense of humour, Hard City makes an apocalypse fun and stylish. It is only a shame that the main game is limited to five gameplay scenarios.

TRY THIS IF YOU LIKED ZOMBICIDE...

Hard City feels like a more light hearted in theme with lighter on the rules version of Zombicide. 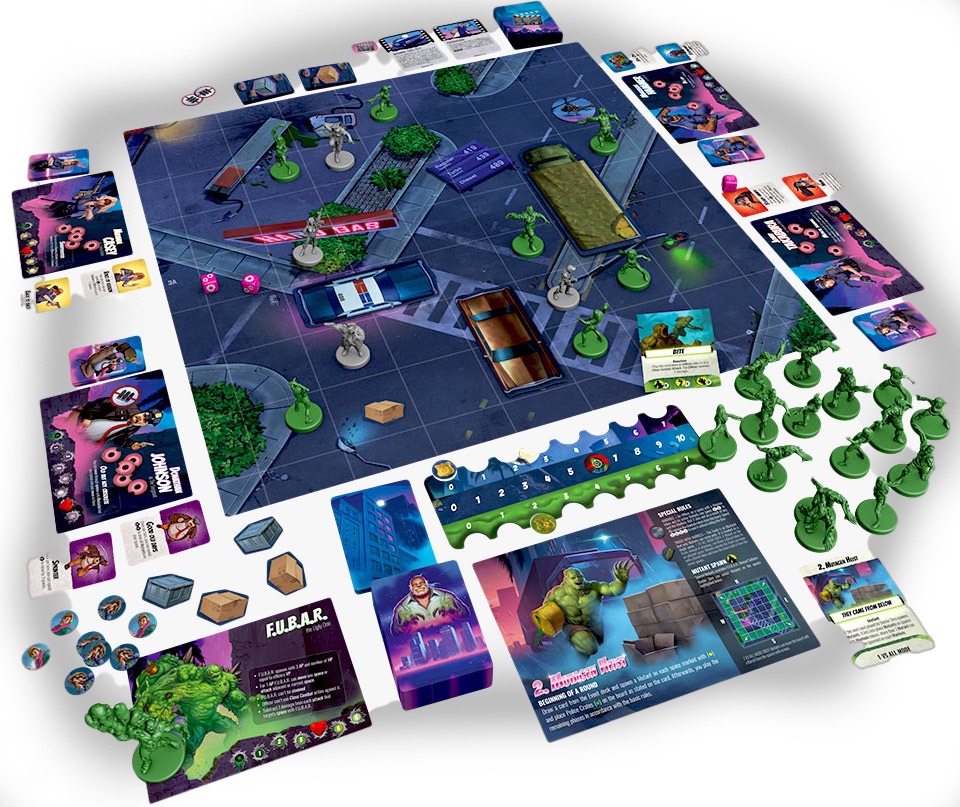