Some genres take themselves too seriously. Too often games of subterfuge are tense affairs of politicking and betrayal. Sometimes it’s nice to make secret plans or foil other peoples plans without leaving enough time to bear a grudge. Gladius is definitely one of those latter types of games.

Gladius is a card management gambling game, with players selecting one of five different spectators to place bets across three events in the arena. Each event starts with players betting on gladiators with one of their personal betting tokens face down, before taking turns to use influence cards to help improve or hamper a gladiator’s chance of success, ending once all players have bet twice (even if their second bet is on a different gladiator).

Once all players have finished betting, any face down cards are revealed and players calculate which gladiator came first and who came last, placing any bets made on these combatants onto a scoring podium card. After three events, the bet tokens on these podiums are revealed to determine the winner.

Unlike other gambling games, winning requires confident betting as well as shrewd card placement. Each event scores based on one or two of the three possible attributes a gladiator has, ensuring that before any cards are played that there will be one side with an immediate advantage. Whilst many cards are powerful and playing your whole hand will greatly improve your chances in a single event, you only ever draw back two cards between rounds, so being able to play just enough to put the odds in your favour is crucial. Though everyone plays with an identical deck, the volume of cards as well as unique spectator powers ensures that you can never completely know what someone is doing, but have to do your best to read the situation as you play.

Even betting requires careful planning. Players have five gold bets with different values that only score on winning gladiators, as well as two bronze coins which only score if the chosen gladiator comes last, but earn extra points for every gold coin also bet by other players. Sometimes betting on someone to lose and ensuring failure through influence cards can be the key to victory, especially if it looks like you’re really support them to win. It’s not uncommon for bursts of laughter as cards are revealed, showing that the whole table inadvertently worked together to completely ruin some poor gladiator’s chances of success, even better when one player was actually trying to make them win.

The game’s tone is highly light hearted, with brightly coloured cards and a wide cast of delightfully illustrated gladiators competing across events such as ‘Ceremonial Parade’ and ‘Blindfolded Battle’ ensuring the game feels jovial even as screw each other over. The game’s fast pace also ensures turns whip round quickly, leading to quick conclusions before the game outstays its welcome.

And despite its strengths in being a speedy game of sneakiness, the reliance on randomness will deter some players. Some cards will outright ruin chances for success, with few means of counteracting them, but given so much of the game is based on face down information, it’s hard to get an idea of how to play strategically, instead surrendering yourself to the chaos.

Overall, Gladius is a bright and breezy game that may not have the staying power of other gambling games or “Gotcha!” card games, but certainly novel enough to not outstay its welcome in short bursts, making it an ideal opening game for a short bout of backstabbing. 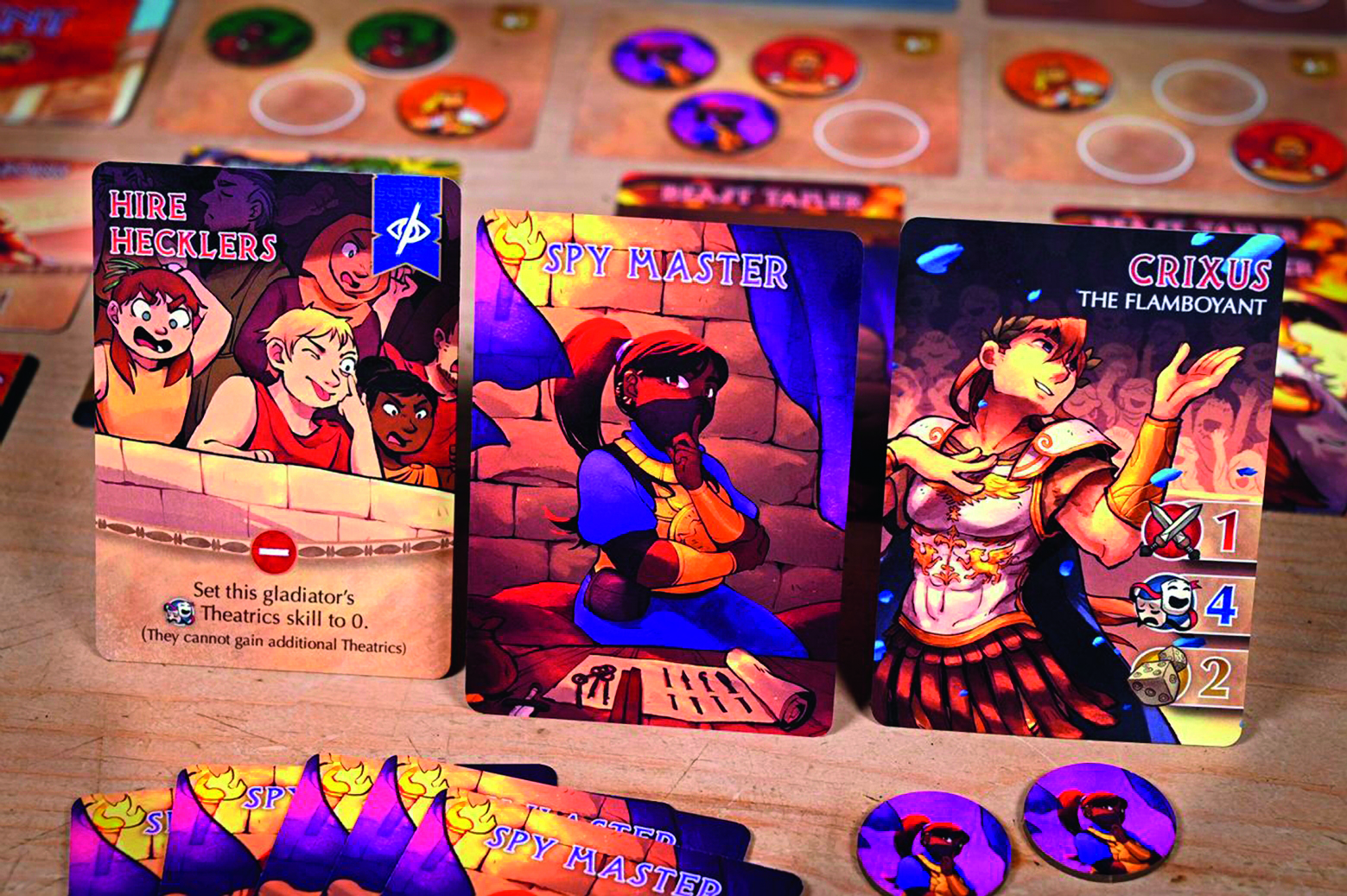 The playful tone and light degree of manipulation make this game a swift yet silly half-hour of fun. Best played with groups who either don’t mind a little randomness or who relish in petty revenge.

TRY THIS IF YOU LIKED Camel Up

The best horse racing game that doesn’t even feature horses, this frantic desert derby game can sometimes feel out of control, if you prefer your gambling a little easier to manipulate you may find Gladius more favourable.

This looks amazing! The review has made me decide to purchase this game :)