Ghostbusters: The Board Game Review Your chance to be a participant in the biggest interdimensional cross rip since the Tunguska blast of 1909.

A good indication of the continued success of ‘modern’ board games is the number of licensed products that have been released or are currently in development. Whereas 10 years ago, most big TV or film licenses would have had the ubiquitous videogame tie-in, now it seems like board games are being seen as a viable method of marketing with the likes of Terminator Genisys, Back to the Future, Mars Attacks and, of course, Star Wars all getting the tabletop treatment. One of the latest franchises to make the move from the big screen to board is Ghostbusters… but is this a game you’re gonna call or is it a disaster of biblical proportions? 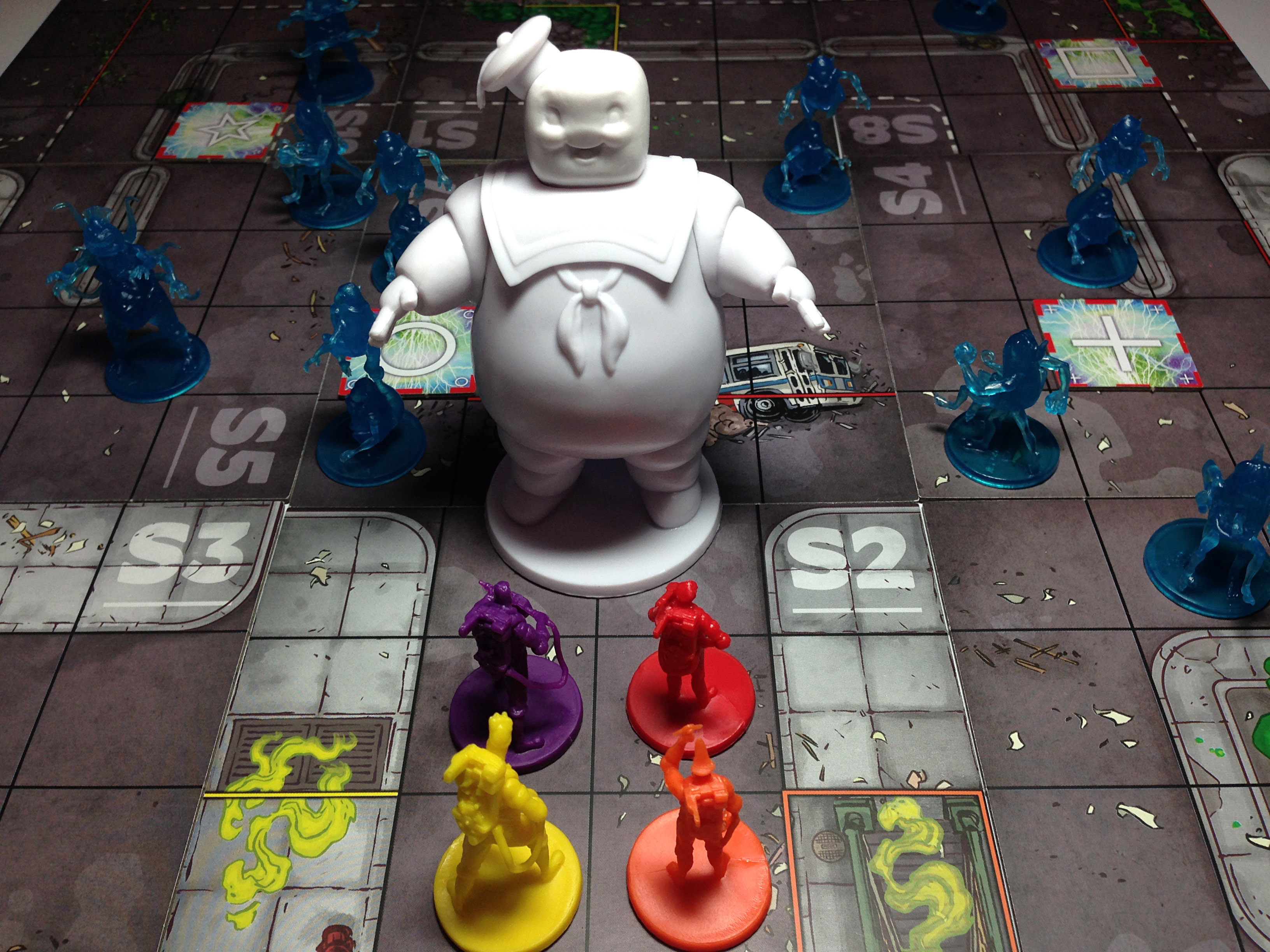 Ghostbusters: The Board Game is a co-operative miniatures-based experience that sees up to four players (it can also be played alone) taking on the role of the four Ghostbusters as they move (or drive in Ecto-1) around the board catching ghosts and closing spirit gates. The number and type of spooks is dictated by the 15 scenarios that are included in the box and range from basic missions that just feature a few ghosties right up to a challenge that sees the ‘busters going up against the mighty Stay Puft Marshmallow Man.

Luckily, although each member of the ghost catching crew starts off with the same abilities, as they progress through these increasingly difficult missions they can unlock better abilities by performing certain actions and gaining experience… so there’s a very light role-playing element here. It’s also neat that the Ghostbusters gain XP in different ways so, along with catching ghosts and closing spirit gates, Peter actually levels up when he gets slimed, while Winston gains extra XP by delivering ghosts to the containment unit on Ecto-1. This means that by the time you’re facing off against big nasties like Slimer or the Marshmallow Man, your team members will feel more like individual characters, each with their own specialties, rather than just four carbon copies.

Of course, with four Ghostbusters in action, you’re going to need some spectres to catch and, certainly at first glance, the game provides you with a veritable feast of enemies: 20 Galloping Ghouls, 12 Gruesome Twosomes, eight Boogaloo Manifestations, Slimer, Idulnas and the Stay Puft Marshmallow (which is extremely heavy and could most likely be used as a murder weapon). A little like Zombicide each of these spooks is controlled by a simple AI that dictates how they move around the board and attack the Ghostbusters. This is indicated by a character card that also shows how difficult the ghosts are to trap and any special rules they may have.

When it comes to catching, the Ghostbusters must roll a die to see if their stream successfully hits. Lowly critters like the Galloping Ghoul only require a three or higher to hit and are immediately trapped once hit, while powerful Class 5s, like Slimer, need four successful hits from two different Ghostbusters before they’re bagged. The problem with the AI in Ghostbusters is that it’s not actually very intelligent and only reacts when the Ghostbusters fail to hit. You see, when you get the scenario it tells you where to place the enemies and, unless you interact with them, they’ll just sit there patiently waiting to be captured. Typically, it’s only when you miss that there will be rules to dictate movement, e.g. the Galloping Ghoul will move two spaces in a random direction but the Gruesome Twosome moves one space towards the Ghostbuster that just shot at it. Some of the scenarios do attempt to mix things up but, for the most part, it’s almost like many of the ghosts can be ignored while you concentrate on the objective. 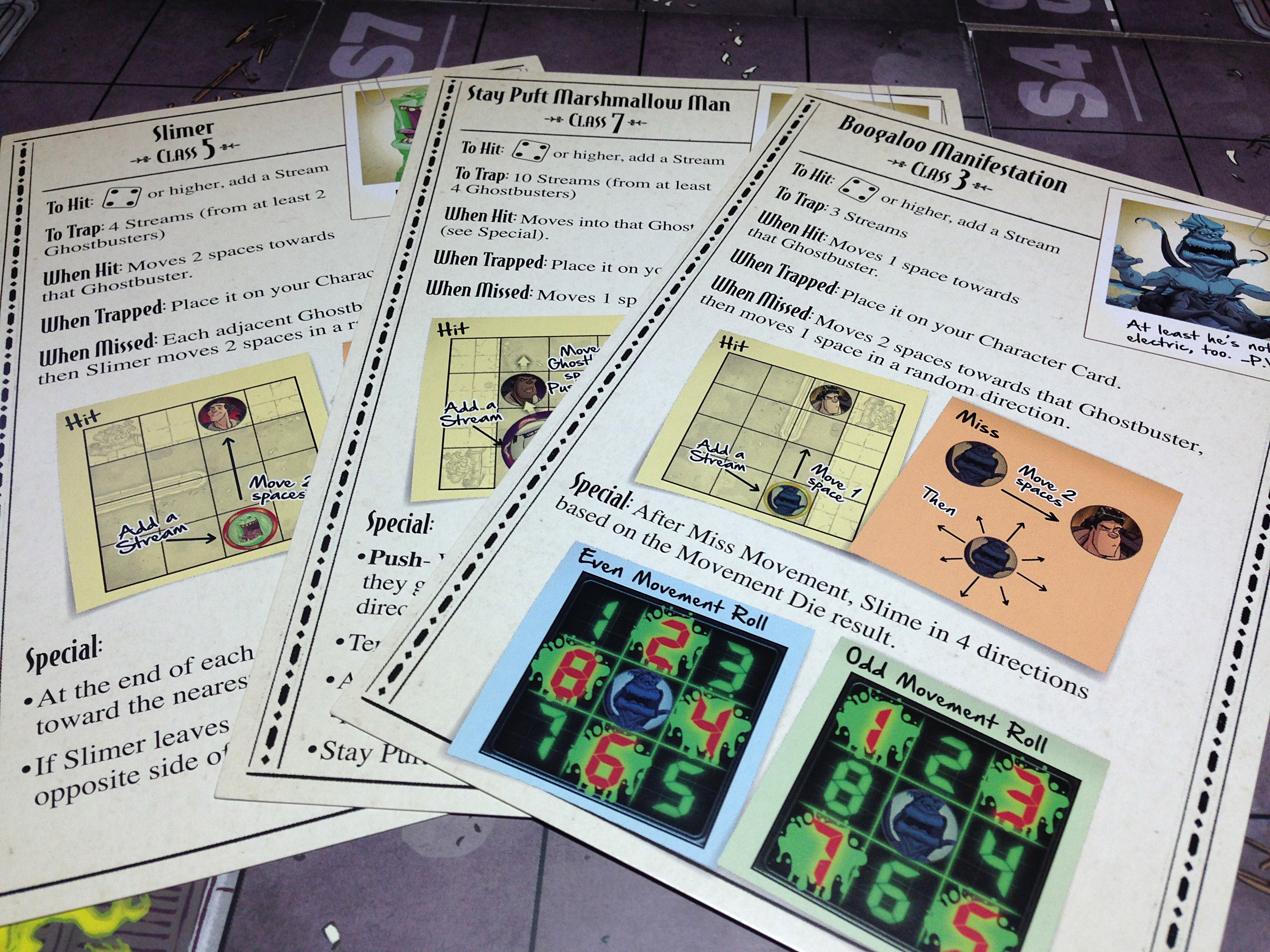 Another problem with the ghosts is that there isn’t a great deal of variety; despite the fact the box comes packed with miniatures. If you’re familiar with the successful $1.5m Kickstarter that funded Ghostbusters then you may recall the large number of bad guys (e.g. Zombie Taxi Driver, Gozer, the Grey Lady, etc.) that were included with the Kickstarter edition. Unfortunately, none are included here, which is a huge shame because even with the addition of bosses like the Marshmallow Man or Slimer, there’s a lack of variety in some of the missions, which is compounded by the similar spooks. By the time you start the final mission, there’s a definite sense of ‘been there, done that’ because you’ve encountered the ghosts before.

Then again, that’s not to say that Ghostbusters: The Board Game isn’t fun because it certainly has its classic moments, e.g. Venkman getting slimed, hopping into the Ecto-1 car to quickly move around the board, encountering Slimer for the first time, etc. However, it’s best approached in the spirit (ahem) of the franchise: a lightweight romp that’s enjoyable but not too deep. Ghostbusters fans will no doubt lap it up – thanks to the gorgeous comic book artwork and strong themes – but experienced tabletop gamers who have cut their teeth on co-op titles like Arkham Horror or Zombicide may not be so enamoured.

In terms of theme, Ghostbusters: The Board game absolutely nails it and throughout the scenarios you do feel like Venkman and the crew speeding round New York to save it from spooks; which is excellent. However, the missions do become a little repetitive and the lack of variety in the ghosts is a let down. As a ‘beer and pretzels’ or entry level game for an evening of light entertainment, it’s great, but as a deeper co-op experience, it’s somewhat lacking.

IF YOU LIKE ZOMBICIDE TRY GHOSTBUSTERS: THE BOARD GAME

If you’re fed up of brainless zombies, then try busting spooks. Ghostbusters is a simpler but still mostly enjoyable co-op game with a strong supernatural theme.