Free, but at what cost?

It says something about the – uh, let’s say ‘intense individuality’ – of Free Radicals that, halfway through giving the rules explanation, I glanced up from the rulebook, suddenly wondering if I was the target of a particularly elaborate and resource-heavy practical joke. Please understand: at the risk of revealing the conclusion of this review too early, I like this game. But it doesn’t lean into its premise so much as rugby-tackle it through a twelfth-storey plate glass window into the hotel pool below.

The ’free radicals’ of the title are mysterious alien artefacts which, years ago, appeared on Earth. In a refreshing exceeding of expectations, instead of nuking everyone or releasing millions of spiders, they provided infinite energy, and so humanity now lives in a futuristic utopia. It’s not cyberpunk so much as cyber-smooth jazz. Each player takes control of one of ten factions vying to harness the potential of the free radicals and gain dominance.

On the face of it, it’s reasonably conventional – there’s a central tableau of buildings you can activate, which become action spaces you can visit to get resources, victory points, or push your marker up a little research track showing how much you’ve learned about alien tech. If you spend resources to ‘awaken’ one of the buildings, every time another player uses it, you get a nice little kickback.

But the meat of the game, the bizarre stew of fleshy chunks that reason denies could have ever belonged to the same creature, are the individual faction boards. Offering asymmetric factions with differences in strategy is nothing new, but Free Radicals features ten options, each of which use completely different mechanics with completely different terminology for taking their turns.

The Executives use a mancala-style board where you pick up coloured tiles and drop them into a wheel of shell companies before taking the action associated with the last company you land in – except you can also liquidate a company to get a different reward and there are projects corresponding to certain combinations of coloured tiles which you can fulfil for extra victory points. Or you can play as the Entertainers, who draw from a deck of cards each turn, playing performers onto a stage and backstage tableau area in order to take actions, and getting bonuses when you manage to put on a show and correctly predict who’s in it. 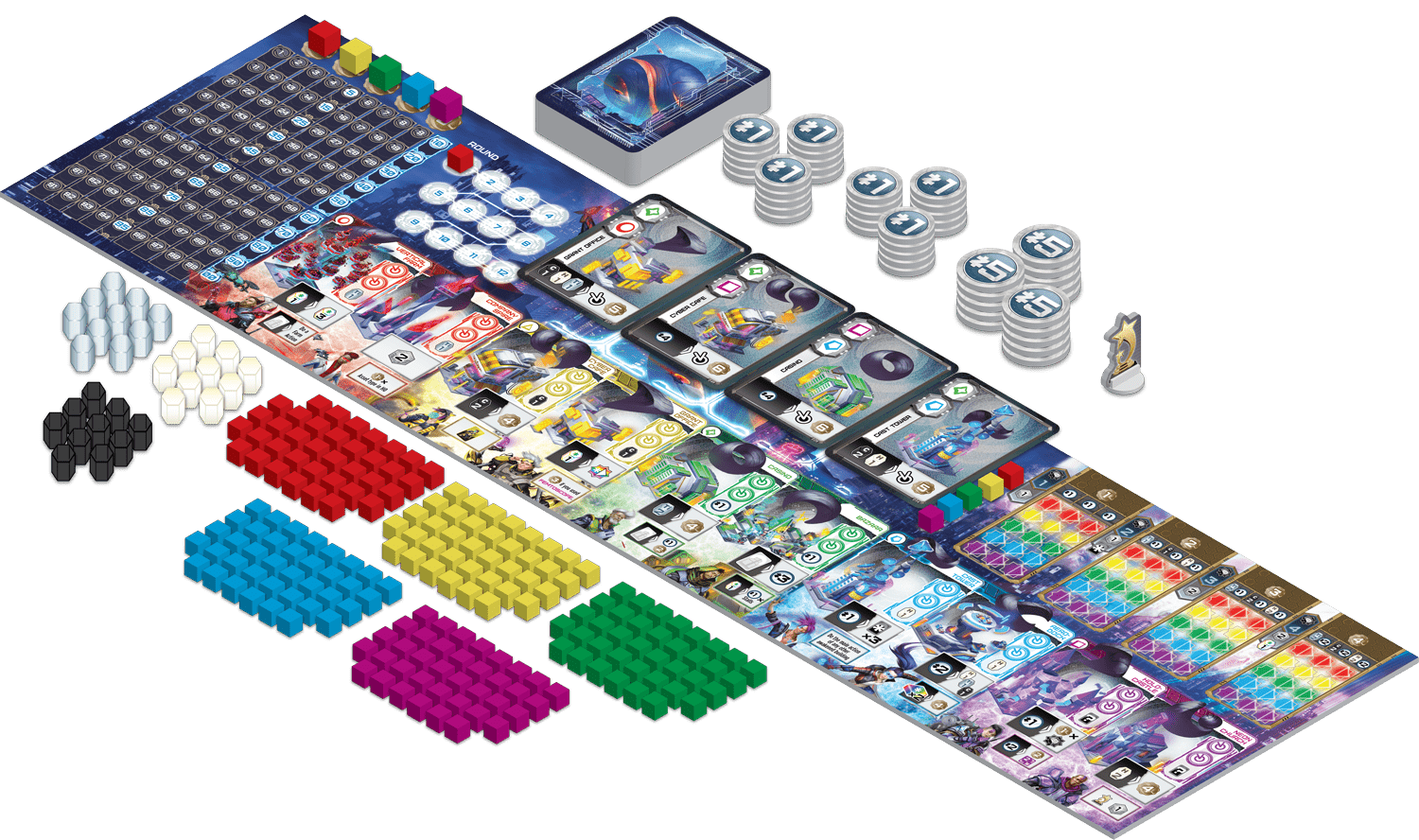 Or there are the Hoteliers, who – amazingly – operate based on a whole tile-laying polyomino mini-game, where you’re trying to build your ephemeral leisure palaces as efficiently as possible, taking actions for each room you lay and earning bonuses for filling a full grid. Or if none of those tickle your fancy, there are programmable moves, character levelling up, pick up and deliver, even a pseudo farming mechanic.

Imagine phoning every takeaway within five miles of your house and ordering one side dish from each. Imagine stitching together a colossal zombie using a piece of every animal in the zoo. Imagine the Tower of Babel, but instead of splintering their languages, God made it so some of the builders could only play Caverna, and some could only play Trajan. That’s Free Radicals.

But wait, I hear you cry, why are you acting like this is so new? Surely cutesy sylvian civil war simulator Root does exactly the same thing? Well, sort of, but crucially, in Root you’re all interacting – and battling each other – on the same map. In Free Radicals the meat of the game happens on individual player boards, each with their own unique mechanics, rewards and terminology. So you’ll hear a player say ‘ok so I’m going to move these assets into my red shell company’ and you’ll have no idea what that means because you’re a farmer laying tiles to grow crops.

Free Radicals is a very ambitious, peculiar kind of game. It’s not for everyone, and it may not even be for hardcore Euro fans, who may find the buffet of mechanisms wide yet shallow. Still, every playthrough has been fun, and very odd. It’s like an incredibly pungent cheese – uh, made from ten smaller cheeses all stuck together – many will wrinkle their noses, but a few (including me) will keep it in their cupboard for discerning guests.

If you think you’d like playing the Lords of Waterdeep phone app while a friend next to you plays Terra Mystica on their phone and a third sitting across the table plays Patchwork on their phone, boy have I got the game for you.