It’s a rare RPG campaign that can’t benefit from a dragon or two.

This truism is especially accurate when it comes to the mighty realms of Dungeons & Dragons, where the expectation of running into scaly death on wings is baked right into the title. However, while the regular old Monster Manual has a couple dozen examples of the species to proffer up, that doesn’t seem to nearly cover the gaming public’s desire for all things draconic. 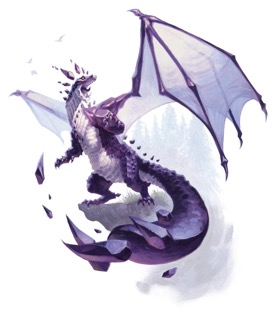 This chunky little tome is a sourcebook all about dragons and dragon accessories. It’s packed with a smorgasbord of draconic lore, stat blocks, campaign ideas and random creation tables. It’s got rules for creating and curating hordes of gold and jewels, suggestions for running a scaly, fire-breathing mafioso as your leading villain, and options for rolling up a ranger that (eventually) gets to ride into battle on the back of their dragon buddy.

In case it wasn’t clear, there really is an embarrassment of stuff packed into the book. Perhaps the most eye-catching of this is the addition of a whole new subtype to the strictly colour-coded system D&D has long abided by: gem dragons. First introduced in earlier editions but absent the game’s current incarnation until now, these sparkly examples of dragon-kind come loaded with psychic powers and funky variations on the traditional elemental breath attacks.

Plenty of parties are prepared for a red dragon’s fire-breath. Few are likely to be ready for the amethyst dragon spitting black holes on them (and no, the book doesn’t really explain what this looks like).

The six new types of gem dragon are well-written and fascinating characters to interact with – especially as their generally neutral nature can easily make them allies or enemies depending on the circumstances - but they are far from the only new additions to the roster. Though they might not catch as many headlines, the mish-mash of seriously weird dragon-things that round out the book are just as entertaining. The Elder Brain Dragon, which is basically an enormous, evil brain lashed to a draconic body that breathes psychic tadpoles, is a nauseatingly creative highlight, as is the diabolically hilarious mimic monster that disguises itself as an enormous pile of gold.

Fizban’s Treasury of Dragons is more than a simple collection of stat blocks, mind you. Alongside all the numbers and dice notation you get pages and pages and pages of ideas and concepts that you can use to flesh out the dragons in your own campaign. There are detailed descriptions of what kind of territory they might keep, how they might fit into a plane-hopping adventure and what their lairs might look like depending on their age and the colour of their scales.

There really is an astonishing, almost overwhelming amount of information presented if you’re trying to burn through the entire book in a single go, but if you’re planning to drop a fire-breather or two into your home game it can be an incredibly valuable resource.

However, as well-written and enjoyable as Fizban’s Treasury of Dragons might be, perhaps the most important word in that last sentence was “if”. The fact of the matter is that you may well struggle to see the value in it unless you’re leaning really heavily into dragons.

Okay, there are a handful of character options that are pretty-much evergreen, including a reworked dragonborn race and the aforementioned drakewarden ranger subclass, but that’s done and dusted by page 29. The remainder of the book is squarely pointed towards the Dungeon Master, and greatly diminishes in usefulness if there isn’t a dragon actively involved in the adventure. In most conventional campaigns, this is a substantial percentage of your playtime.

Fizban’s Treasury of Dragons is a solid, entertaining book that rounds out the game’s most iconic creatures. It adds in oodles of lore to play around with and sets the stage for all kinds of draco-centric campaigns, as well as some truly world-shattering battles that can make a great capstone to any campaign. However, this narrow focus can make it feel a little lacking in raw value when stacked up against D&D’s other monstrous source books, such as Mordenkainen’s Tome of Foes.

Still, if you’re actively planning on running a game packed to the gills with super-intelligent magical lizards or aren’t too concerned with cost and just want to round out your D&D content, this fiery tome won’t disappoint.

It’s a great book for the right game, but only shines when you’re dealing with dragons.

TRY THIS IF YOU LIKED Hoard of the Dragon Queen

If you enjoyed a campaign about dragons, then try working with an entire book of them.