Moods on a map

First Empires imagines an alternate history where five early, less well-known civilisations rise to become the great empires of the world, and proceed to replicate the violent struggle for territory and power of our more familiar ones.

Rarely has a little game looked so impressive straight out of the box – custom meeples for each civilisation, asymmetric player boards with recesses for your tracker cubes to slot into, custom dice for the game’s resources. Each civilisation gets its own deck of little achievement cards with – get this – its own deck box that holds its tokens and meeples as well.

Yes, these are small matters of aesthetics, but it makes such a difference when you start the rules explanation and you get hand new players their own little deck box full of stuff. It makes the game feel exciting before you’ve started to play and it gives the sense of a production process that’s had thought and love poured into it.

First Empires looks like a classic soldiers-on-a-map civilisation game, and thematically, it is, but the heart of what you’ll need to do happens on your civilisation board. It’s here that you’ll spend resources from the dice you throw each turn to raise your civilisation’s development in five areas. These five areas allow you to, respectively: roll more dice, reroll more dice, move your meeples – representing explorers – farther, draw more achievement cards and gain more meeples.

Each civilisation’s board is arranged a little differently in terms of how far you have to advance to get what reward, and how many victory points you earn. Hitting certain milestones mean you have to place a city in one of your territories, worth 1-3 victory points at the end of the game. Placing a city is often not something you want to do – it’s like a golden apple pie left cooling on a sill, and your opponents can invade and claim the points for themselves.

But unlike the prototypical civ/war game, First Empires is surprisingly, pleasantly forgiving when it comes to losing territory. Fights are simple affairs, resolved by whoever has the larger force, augmented by dice with swords on. The loser moves their troops to another of their territories, and you can’t be invaded i 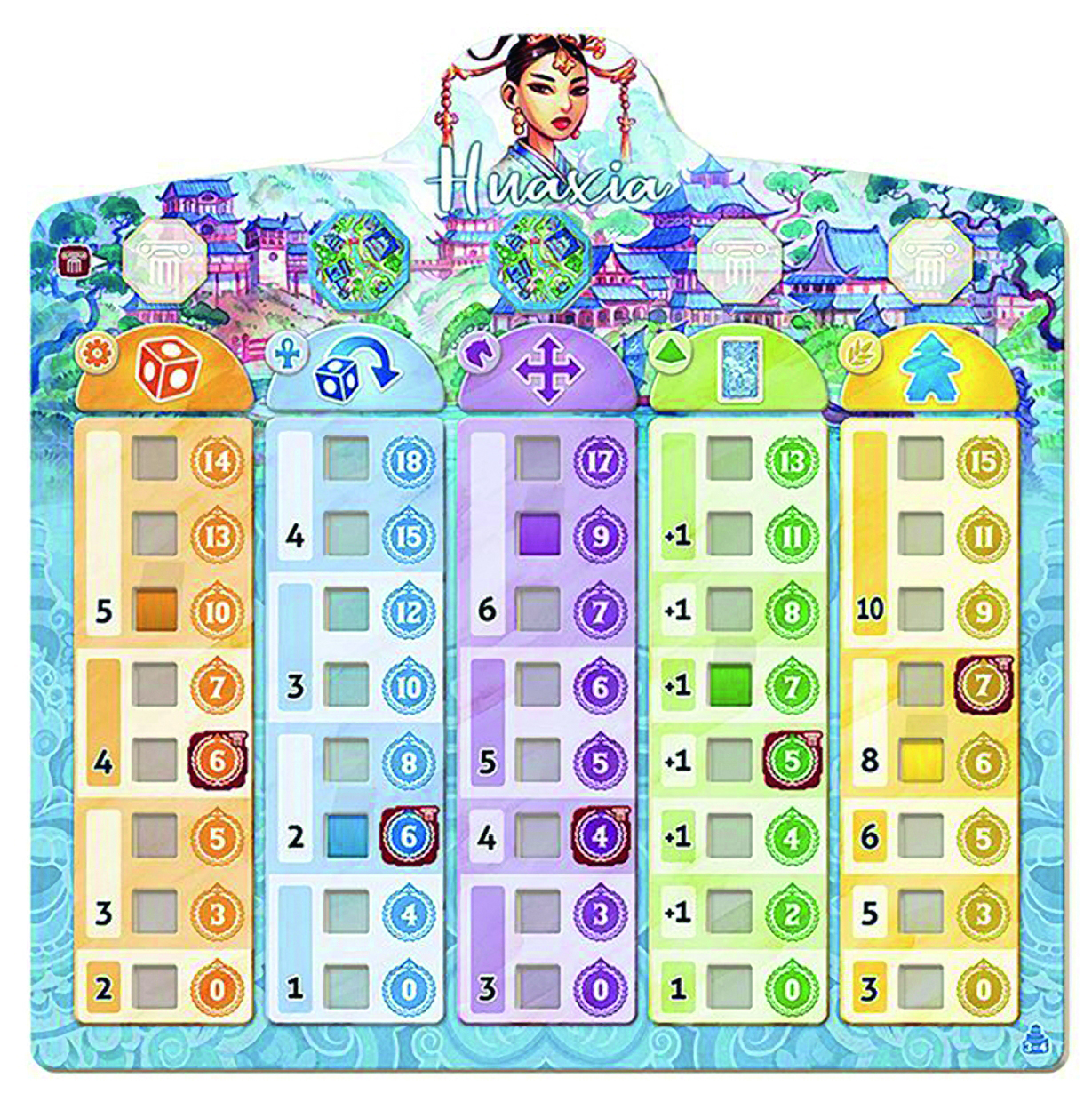 f you’ve only one territory left.

You can’t cash in resource dice unless you control a territory with a matching symbol, and certain achievement cards might require you to control a certain number of territories to claim the victory points, so everyone’s always got a reason to be pushing each other around. But it never feels personal, and a territory gained one turn will likely be lost the next.

The flipside to this easygoing trading of land is that some – most, even – of the game’s events can feel a bit inconsequential. It’s nice to have a civilisation game where mistakes aren’t brutally punished and players don’t get eliminated, but sometimes the decision space feels a bit baggy, like you can do almost anything and it’ll be about as viable as anything else.

Certainly there’s some nuance that doesn’t become apparent until a few games in – the achievement cards offer some hidden depth. First-time players will probably overlook just how many points you can pick up by drawing new cards and completing the simple missions. Similarly, when to place your cities is something of an art – generally the answer is the later the better.

How much each city is worth is hidden information until the end of the game. This was obviously intended to increase tension by making the final scores opaque until the game is over, but it also robs players of agency. Most of the time, it means the winner of this clash of empires is decided by flipping a few cardboard tokens. Rather than an exciting finale, it can make the end of the game a bit anticlimactic – you might as well have just flipped a coin.

First Empires is a welcome attempt to make a lighter, friendlier title for the ever-popular civ genre. It’s beautifully presented, easy to learn, and doesn’t take an entire day. It just feels a bit fuzzy round the edges, design-wise. Not world-conquering, but its undeniable charms might make it one for those pining for a gentler form of conquest.

TRY THIS IF YOU LIKED Quantum

The closest analogy in terms of where it stands relative to its genre is space colonisation game Quantum, which turned space battles, tech trees and claiming planets into something you could see out in under an hour.