A paleolithic playground of discovery

Fire and Stone is a two to four-player game of stone age exploration and expansion from the famed designer of Carcassonne, Klaus Jurgen-Wrede. Over the course of a variable number of rounds, players will be hunting, gathering, inventing, and settling as they strive to net the most victory points. Points will be granted for every hut placed on the map – with bonuses for majorities and fulfilling personal goals – alongside any points snatched from a dwindling deck of gradually less valuable cards.

Immediately, the game represents a significant departure from the designer’s tile-laying classic in terms of its scope. Yet, despite this increased volume of both components and mechanics, Fire and Stone strives for a level of simplicity potentially suited to players looking to take a step up from Carcassonne and other gateway classics.

Central to Fire and Stone’s theme and gameplay is a consistent sense of discovery. At the start of the game, every space on the map is populated – somewhat laboriously – with facedown tiles. Every turn, players will be moving before flipping one of these tiles, with its illustration subsequently determining their action. There’s a decent range of outcomes here, from establishing settlements, campfires, and hunting grounds, to simply gathering tiles depicting fruit, nuts, or root vegetables. Pleasingly, many of these actions are nicely thematic: Forest tiles, for example, populate the space with a trio of animal tokens, each depicting varying ratios of food and bags. Players can then convert these animal tokens at any revealed Fire tiles.

Whilst this integral sense of discovery is fun, its application here doesn’t leave much room for clear-cut strategy. Fortunately though, as the game progresses, a number of other gameplay elements introduce some interesting decisions and subtle strategic possibilities. 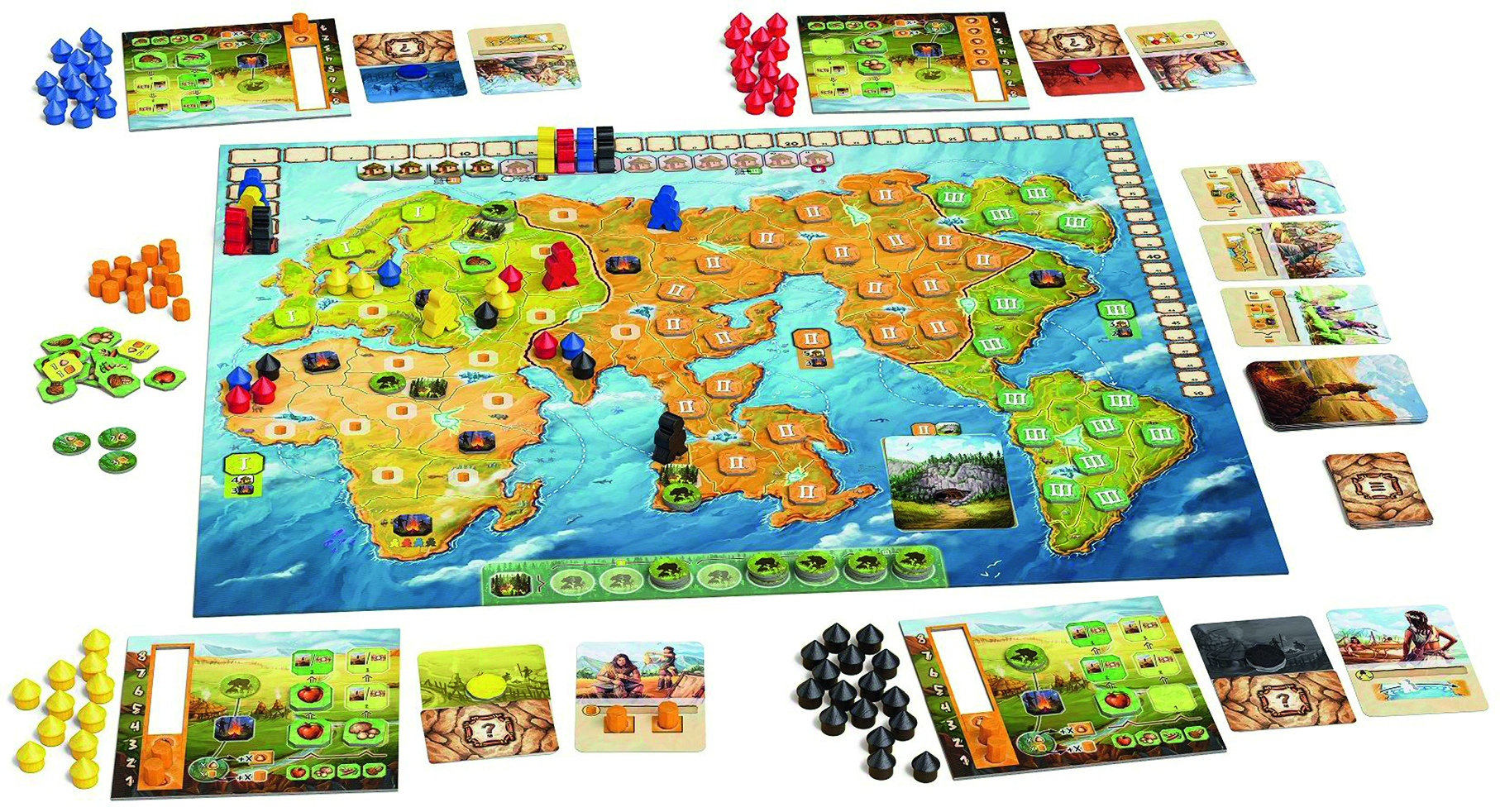 Most notable is the way in which inventions are implemented. These rule-bending cards are gained by collecting matching sets of gathering tiles, and generally give players enhanced movement and further food gathering capabilities. But more interestingly is the option to forgo taking an invention and instead claim a victory point card. Whilst this may seem like the obvious choice, Fire and Stone complicates matters by requiring victory point cards to be placed atop inventions, permanently disabling its ability.

Alongside provoking some difficult decisions, this concept is also responsible for a large portion of the game’s competitiveness. Indeed, denying your opponents the benefits of ship building cards by hoovering them all up is as valid a tactic as sacrificing your transport sled to snatch that last four point victory point card. My only complaint would perhaps be that having victory and glory come at the cost of the progress of your people feels less thematic than other elements of the game. Although, for those who have seen satirical film Idiocracy, this sense of the victors becoming dumb whilst the resourceful stragglers fade into obsolescence might feel pretty apt.

Fire and Stone’s excellent pacing and simplicity undoubtably holds some appeal for players looking for an undemanding dose of tabletop discovery, but there are a couple of elements lessening its accessibility. Firstly, preparing the board can be a hassle, with its relatively large number of components feeling at odds with the game’s simplicity, and potentially even appearing somewhat daunting to unfamiliar players.

At the other end of the spectrum, for a mechanically simple game to remain interesting for avid gamers, it’s generally favourable to have each turn present a consistent yet engaging puzzle. Here, players are largely at the whims of their discoveries – a feature that feels both diverse and exciting whilst unfortunately offering diminishing returns.

Fire and Stone feels like a gateway classic from a decade ago – a quality sharing both positive and negative aspects.

TRY THIS IF YOU LIKED STONE AGE

A lighter, and arguably more thematic take on the theme popularised by this beloved worker-placement title.