Straight down the middle

Don’t judge a board game by its cover, the old adage goes. You certainly shouldn’t do so in this case, not least because there are two covers for the same game, reasoned as being the two equinoxes and certainly not a marketing ploy, but also because the tranquil setting demonstrated on the front of the purple version, which I was to play, certainly didn’t give any warning of the arguments across the table that were to come, nor of the fight to the death style game that would emerge.

Created by design royalty that is Reiner Knizia, the game is a ‘simple’ betting style card game, where each round you’ll place a bet on the animal you believe will survive until the end. Survival is dictated by the numerical value on the cards laid out, with the lowest value being eliminated (brutally murdered, one can only assume), where you’ll gain points based on how early the accurate prediction of the victors took place.

Much like the forests, this game sprawls all over your table. The cards are tarot sized, and you lay out each in a large 9x6 grid formation. Though you may not use the whole grid, as the game can end if you run out of cards in the deck, the space you need is quite significant. Whilst you’re distracted by how well made and nicely tactile to feel the pebbles are, you’ll look up and see your table mostly lost. At least the cards are pretty enough to make it worth it.

But we must of course talk about gameplay, and you may have noticed the reference to it being ‘simple’. At its heart, it is. Bet on the future winner using those pebbles, play cards to increase the likelihood of your own victory (or others defeat), and the lowest numbered card each round is eliminated, ready for the next round. And yet, this game has been surprisingly difficult to explain to others, as it sneaks in some additional complexity in a number of different areas, making it far too easy to over-explain as the game begins.

For example, special powers can be pivotal. You gain those by being the controller of that animal, which in turn, is gained by placing a bet on it, where you add up the prestige values given by the round itself, and the bets placed by you on it specifically. If your total for that creature is higher than your fellow players, you are the controller, and get a boost to use. For example, controlling Rubble means that you can place a prediction pebble on any unoccupied space – even those in a much earlier round. This is a huge boon, especially later in the game. That might cause you to reveal a secret prediction, which you make in round one. Revealing it means you can use its special power, but then your fellow players know who you’re going to be rooting for, and want to stop you. That’s before even bringing up chameleon cards, tree cards, and discard rules.

It’s no secret that Reiner Knizia recreates mechanics of his previous games, and indeed this succeeds Colossal Arena, a 1997 game of being a spectator betting on events in the arena. Equinox gives it a new lease of life, adding new appealing visuals, because frankly, Equinox is beautiful. Each card is deliciously designed, and even the pebbles are a stand out surprise. Whether it adds enough to the original game – which seems to be two new creatures – is kind of neither here nor there, as now it has a family appeal, and gives you an excuse to play what was a well received game in a slightly different way. 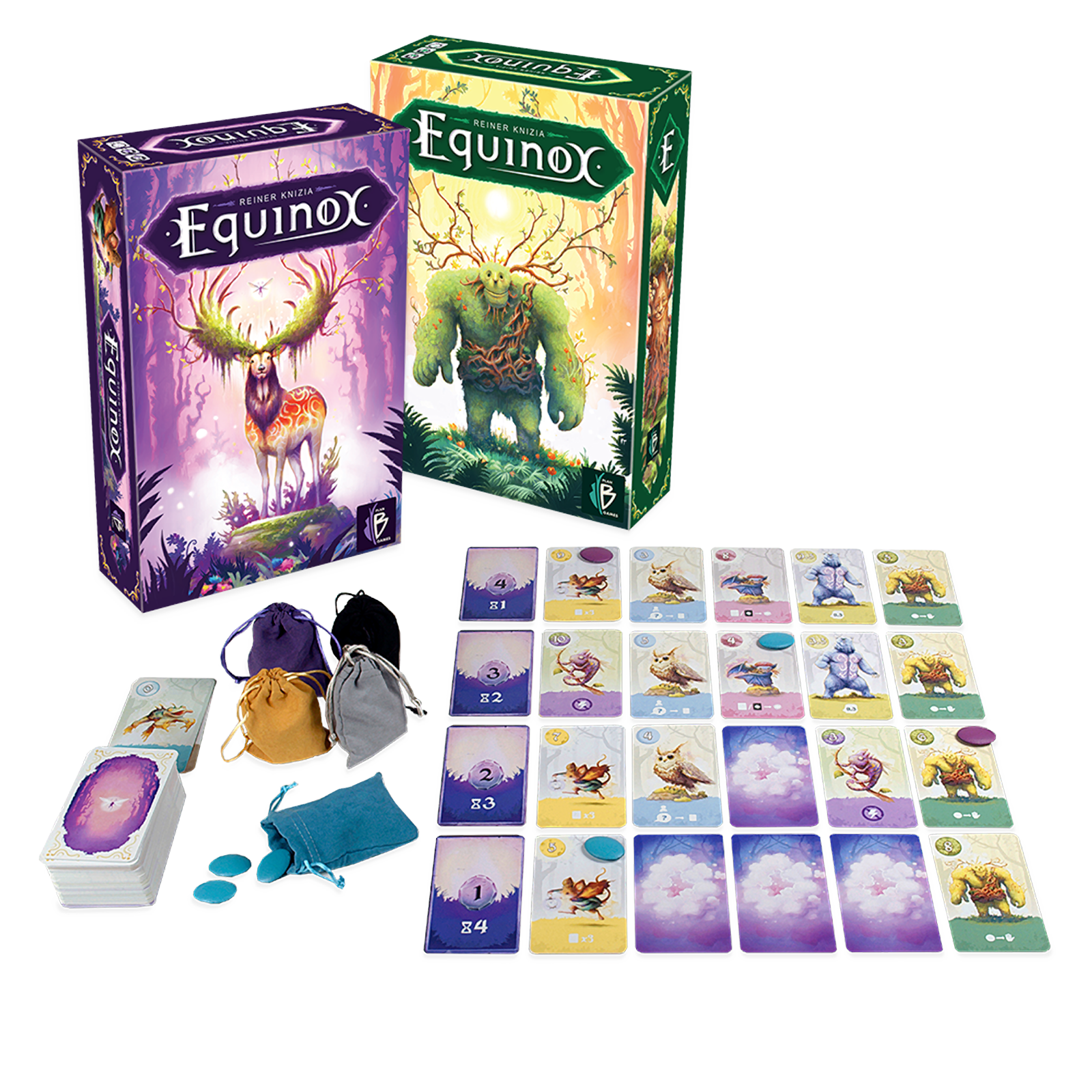 Once you’ve got your head around it, it’s delightfully competitive. A good dose of sneaky good fun.

Play if you liked… Colossal Arena

Or indeed, Grand National Derby, which shares the same bloodline – although the art direction on Equinox probably puts it a nose ahead.