The next train game you should choo-choose

How does another train game follow the tracks of the beloved card-drafting Ticket to Ride, or a classic worker-placement Russian Railroads, or delectably brain-scratchy resource management of Whistle Stop? Well, they could do it like Empyreal: Spells & Steam: with style. This is one impressive looking game – its Gloomhaven-sized box is layered with custom trays and compartments, designed to hold the smorgasbord of Empyreal’s components. The trays are a perfect mixture of function and aesthetics, having a dedicated space for every little piece in storage, but also beautifully displayed on the gaming table, making the set-up process last mere minutes.

The main game takes place on the modular map, where every hexagon space represents a certain magical resource. Players will be placing their trains on the board, forming networks and routes, by which the resources can travel to various cities scattered around the board. Delivering resources to the cities and fulfilling specific demand tiles, earns players victory points. At the start of the game, every colourful hexagon is filled with a specific resource token, but by the end, while the number of resources has diminished, various train minis form snaking and crossing paths that span across the gaming landscape. 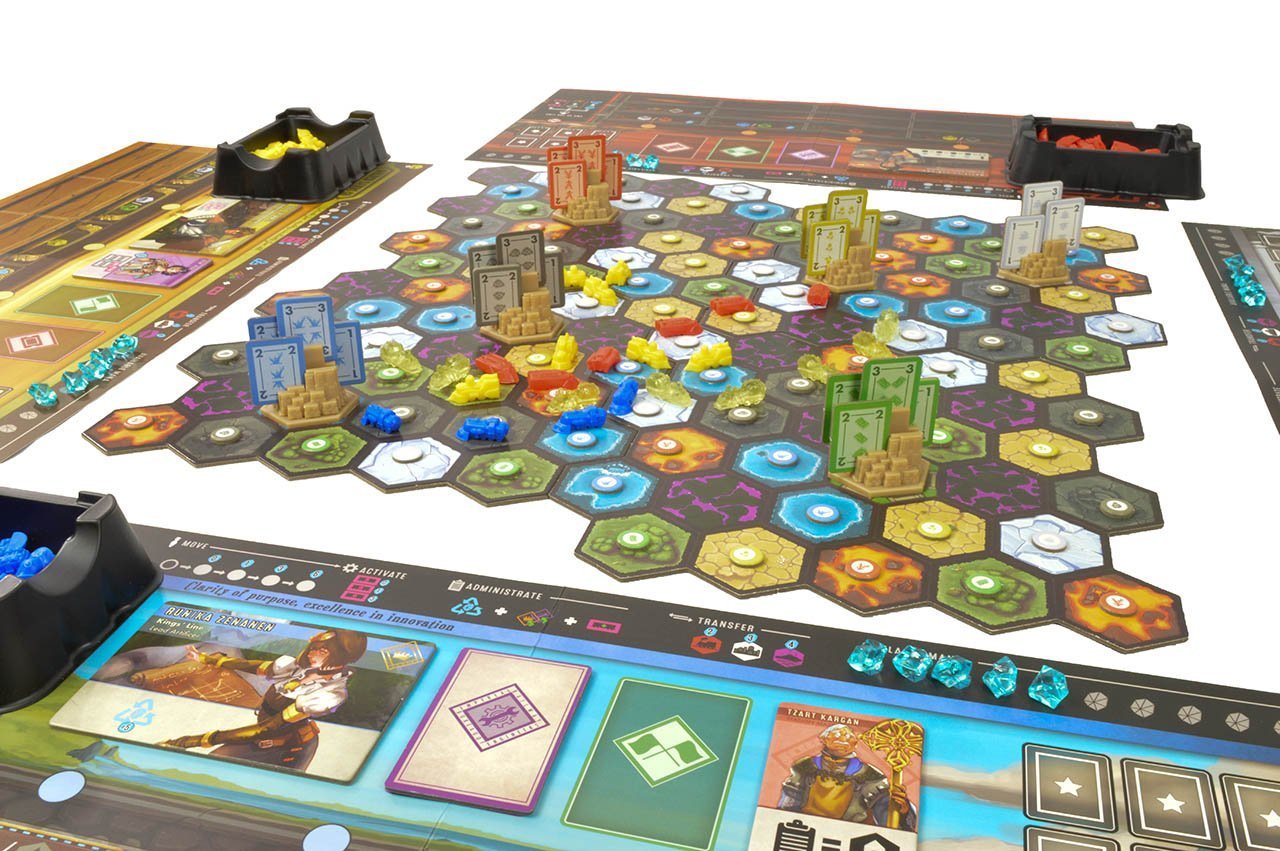 Despite the visual busyness of the main board, the majority of the game happens on the individual player boards. Here the player’s conductor pawn travels through the magical train cars activating one or more (if they can pay with mana) abilities. What abilities players get during the course of the game, how they arrange them on their train car spaces, how often they activate them or deliver goods to the city, forms the main engine of the game.

Having seen the number of components and the size of the board, it may come as a surprise that Empyreal is not a big or complicated game. In fact, if it had not so efficiently organised itself with storage and packing, the set-up of components could have equalled the gameplay length. Once the game gets going, players effortlessly steam ahead, placing trains on boards, picking up more train cars and delivering resources.

What can, however, impede the smooth journey is having to look up the reference for various abilities of the train cars or specialists. The game comes with a lot of variety: every train car does something different and every character that can be recruited for your train company also has a unique ability. Yet their iconology is not immediately clear and the sheer volume of the abilities available makes it impossible to remember what each of them do. The majority of the rulebook is dedicated to referencing each card within the game, making it very accessible and easy to find. Unfortunately, it does not make the 20th dive into the rulebook to look up a card explanation any less frustrating. Although this would typically be a minor gripe, in a game so fast-paced and easy to play, even small stops and starts are very noticeable.

Variety is, however, spice of life, and Empyreal is nothing if not a little extravagant and exuberant for the size of its gameplay. Yet it carries it so effortlessly, it is easy to be whisked away in a train car zooming through an ice tundra located next to molten magma lands, watching precious materials teleport before your eyes and simply enjoying your magical journey.

Entering the train game scene, full steam ahead, Empyreal: Spells & Steam is an incredibly appealing visual offering and it keeps up a swift pace with its gameplay.

TRY THIS IF YOU LIKED TICKET TO RIDE...

While Empyreal is less focused on the precise route building then Ticket to Ride, it is equally accessible for players and has a very appealing table-presence.