Buried in the sand

As indicated by the constant stream of board games based on Frank Herbert’s 1965 sci-fi epic, Dune’s IP is very hot right now. Dune: House of Secrets is the latest game exploring the Dune-verse, and, judging by its box art, piggybacking on the release of Denis Villeneuve’s recent cinematic re-imagining of the book. House of Secrets also features a story-driven cooperative gaming system from Detective: A Modern Crime Board Game, utilising both physical and digital components to tell an interactive story.

Despite the faces of the hero Paul, his mother Jessica and one of the series antagonists, Glossu Raban on the box cover, players will take on a role of new characters, exploring the mysteries of the planet Arakkis (another name for Dune). You are the underlings of the underlings, with no power and significance to affect the larger Dune narrative, but perfect to star in a self-contained story that could happen in the background of the major events of the first book. Each character has enough relation to an established character, that the interest of those familiar with the franchise is piqued. Yet, they are also removed far enough from the central book storylines, that any newcomers don’t feel like their lack of universe knowledge holds them back.

Yet, it still feels like House of Secrets’ narrative aimed at both newcomers and established fans but managed to miss them both. Newcomers get bombarded with names, locations and terminology that is impossible to digest all at once. The game drops words like ‘spice’, ‘Fremen’, ‘ornithoopter’ left, right and centre, but its constant usage doesn’t make you feel like you are in the Dune universe. If stripped of those terms, the story could belong on any sandy planet, where an underground resistance attempts to take down a bunch of bad guys.

The gameplay feels equally confusing. Players are constantly jumping between reading the cards or the web browser. The game feels like Choose Your Own Adventure book but with a lot more faff through dealing with both physical and digital mediums. And you will need to create an account to use the website!

Through the course of the game, players will decide together which narrative paths to take and will deliberate on some of the mysteries within the game. To progress through certain storylines, players will be required to spend tokens. Tokens are a precious resource, the rulebook warns, and needs to be spent wisely. It is, however, unclear how to determine what is a ‘wise’ expenditure. It is impossible to predict how many tokens of each type will be needed during the scenario. Additionally, spending a token, while symbolising of a type of activity (for example, subterfuge token usually indicates a covert action), doesn’t indicate how an encounter will resolve. Perhaps, you can’t do a certain action because you don’t have a corresponding token, but you also can’t tell whether you are better or worse of having done something else. The choice ultimately comes down to what narratively makes more sense and tokens themselves play very little part in the decision-making process.

The game of Dune: House of Secrets is only played once covering three connected story adventures. Characters gain permanent stickers as they level up through the course of story, making it impossible to replay the game from the start. It is another strange component decision that drastically decreases the shelf life of the game.

It is hard to believe that Dune: House of Secrets is the intersection of an IP as exciting as Dune and the game system as interesting as the one in Detective: A Modern Crime Board Game. There is clearly so much potential in both elements which, perhaps, deepens the disappointment in the resulting product. 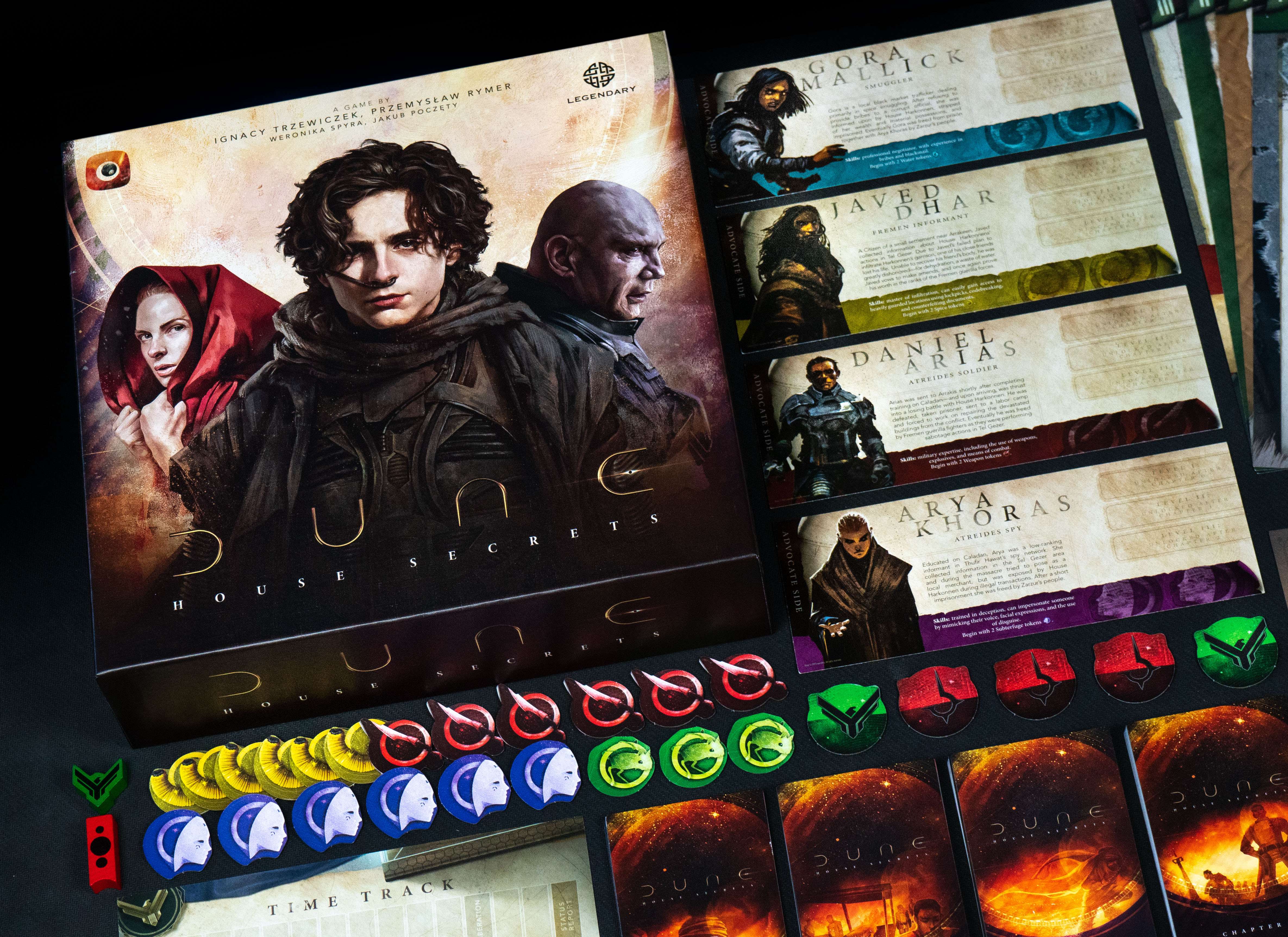 A confusion of narrative and gameplay mechanics, Dune: House Secrets unfortunately fails to capitalise on the success of its IP and the original game system of the Detective: A Modern Crime Board Game.

TRY THIS IF YOU LIKED SHERLOCK HOLMES CONSULTING DETECTIVE

If you like text-heavy games, like Consulting Detective, piecing together various narratives of Dune: House of Secrets will be elementary.