It may have first released almost two decades ago, but even now Dragonland does not feel dated. A Renier Knizia game, it seems, remains feeling fresh even many years later and even if you may have played a variation of this design several times over. This time, players venture into the volcanic lands of dragons, looking for treasure and precious dragon eggs to collect. The choice of what to do is simple: roll the dice, move your pawns and if you find yourself atop of a volcano pick up some treasure.

Unlike many other move-pawn-along-the-track games, Dragonland does not simply let its players be ruled by the luck of the roll. There are plenty of decisions to be made each turn and seemingly small rules have a large impact on the overall gameplay. For example, the track is not linear, and players can move their three pawns each turn based on the rolls in whichever direction they wish to, including cutting off their opponents and stealing gems right under their noses. In fact, a race to a particularly large volcano may be a good strategy. Yet, even if you don’t come first, you will never walk away with nothing. While having a lot of gems certainly moves a player up on the victory track, collecting sets of gems of unique colours brings significantly more points at the end of the game. The special power tokens also should not be underestimated as their abilities allow players to manipulate actions and movement, making the game so much more exciting than travelling on a predetermined track.

The latest release of Dragonland, sports updated components and a fresh coat of paint on the artwork. The drawing style became cutesier, starting from the dragon on the cover down to the rainbow unicorn tokens, which are only too reminiscent of my little pony. While this is clearly a family game, this new, arguably, younger-looking art, can also feel a little too focused on the style, losing some of the practical clarity of the original. For example, on the board it is not always clear which paths lead to which volcanoes as the artworks fight for space with each other, almost merging together. 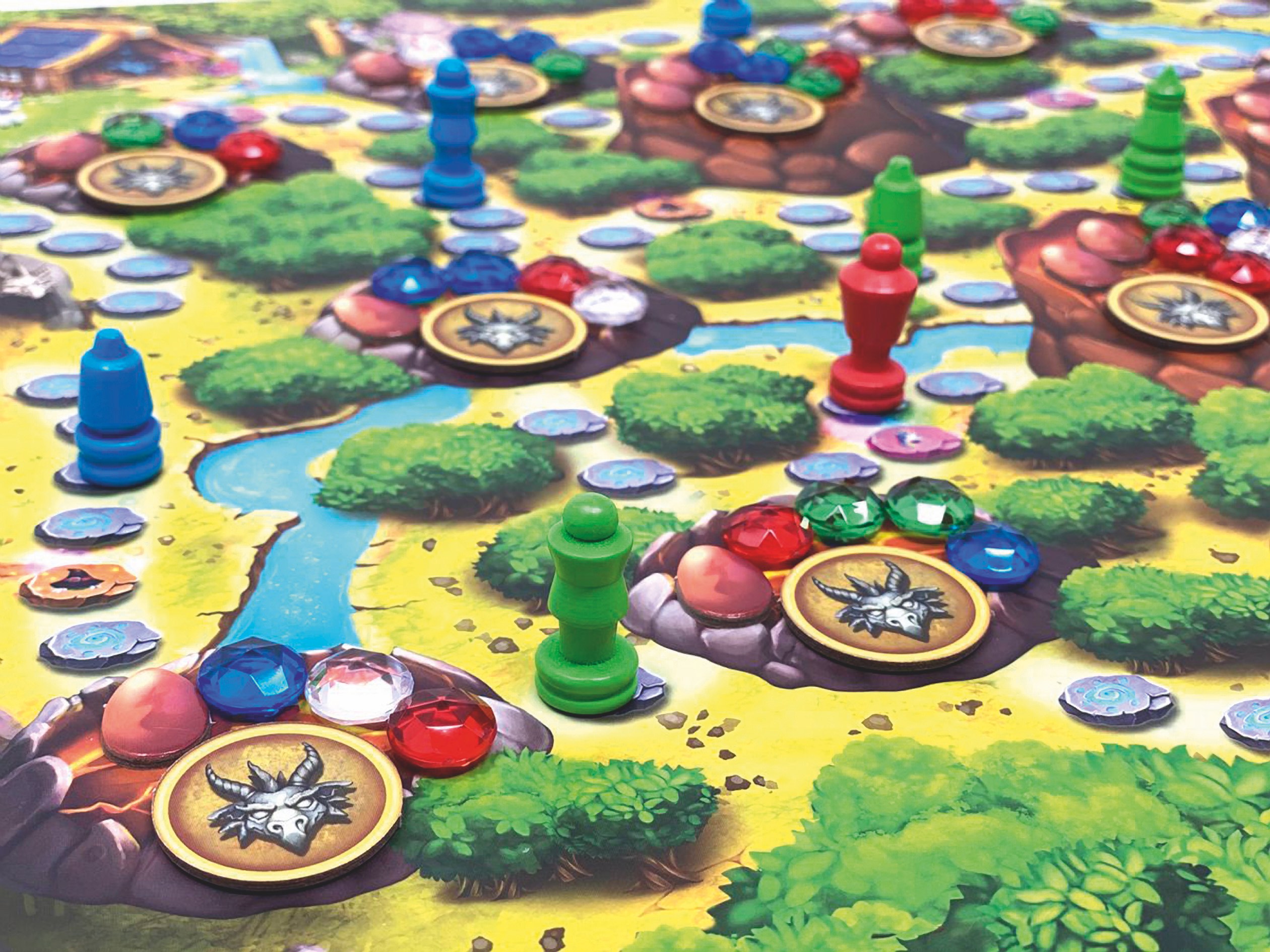 Dragonland also includes a dice tower – not an essential part of the game and so a lovely surprise when you unpack the game. Unfortunately, we have been spoiled by the thoughtful design and detail of Wingspan’s dice tower, fashioned in the liking of the birdhouse. Any other games now, whether it likes it or not, will be measured against a very high standard it has set up and Dragonland falls right into this pitfall. Even lesser quality aside, due to the size of the box, the dice tower has to be assembled and taken apart each game which will end up damaging the cardboard, which eventually could make it unusable.

Yet there is undeniable beauty in Dragonland when its board is laid out in front of you, sparkling with many-coloured gems. There is also an appealing elegance in its gameplay, that no doubt makes it so easy to pick up and play. But despite its focus on family gaming, it is easy to see that players may outgrow Dragonland pretty fast. Then, maybe in search of similar but more challenging gameplay, they will move on to Knizia’s other games, like Through the Desert or Babylonia, which in the end, will be a testament to Dragonland in of itself.

Board game shelves can feel incomplete without a Renier Knizia game, however after having one or two you can safely stop shopping. Having a Knizia game designed for younger board games could be a good steppingstone to some of his classics later down the line however.

TRY THIS IF YOU LIKED BABYLONIA

Dragonland is another variation of the gameplay we have come to expect from this prolific board game designer, but with a more family-friendly orientation.