Doctor Who: Time of the Daleks Review Historically, licensed games have gotten a bad rap. Today, however, there’s a wealth of engaging tabletop experiences utilising iconic worlds from other media, and a growing number of publishers gaining renown for producing them. Ravensburger gave us the deliciously nostalgic Jaws and the gleefully schlocky Horrified – family friendly games with enough bite to grip serious gamers – whilst Gale Force Nine recently enraptured sci-fi horror fans with the frantic, thematic action of Aliens: Another Glorious Day in the Corps. But, when faced with the complexities of time-travel and a fandom stretching back over half a century, can Gale Force Nine keep the ball rolling?

First released in 2017 and now entering its second edition fronted by Jodie Whittaker’s Thirteenth Doctor, Doctor Who: Time of the Daleks is a semi-cooperative dice roller with more than enough content to satisfy fans of all eras. Players will each be assuming the role of a Doctor (the First, Fourth, Eleventh, and Thirteenth in the base game), travelling through time and space recruiting companions as they attempt to overcome the threat of Davros and his horde of Daleks. 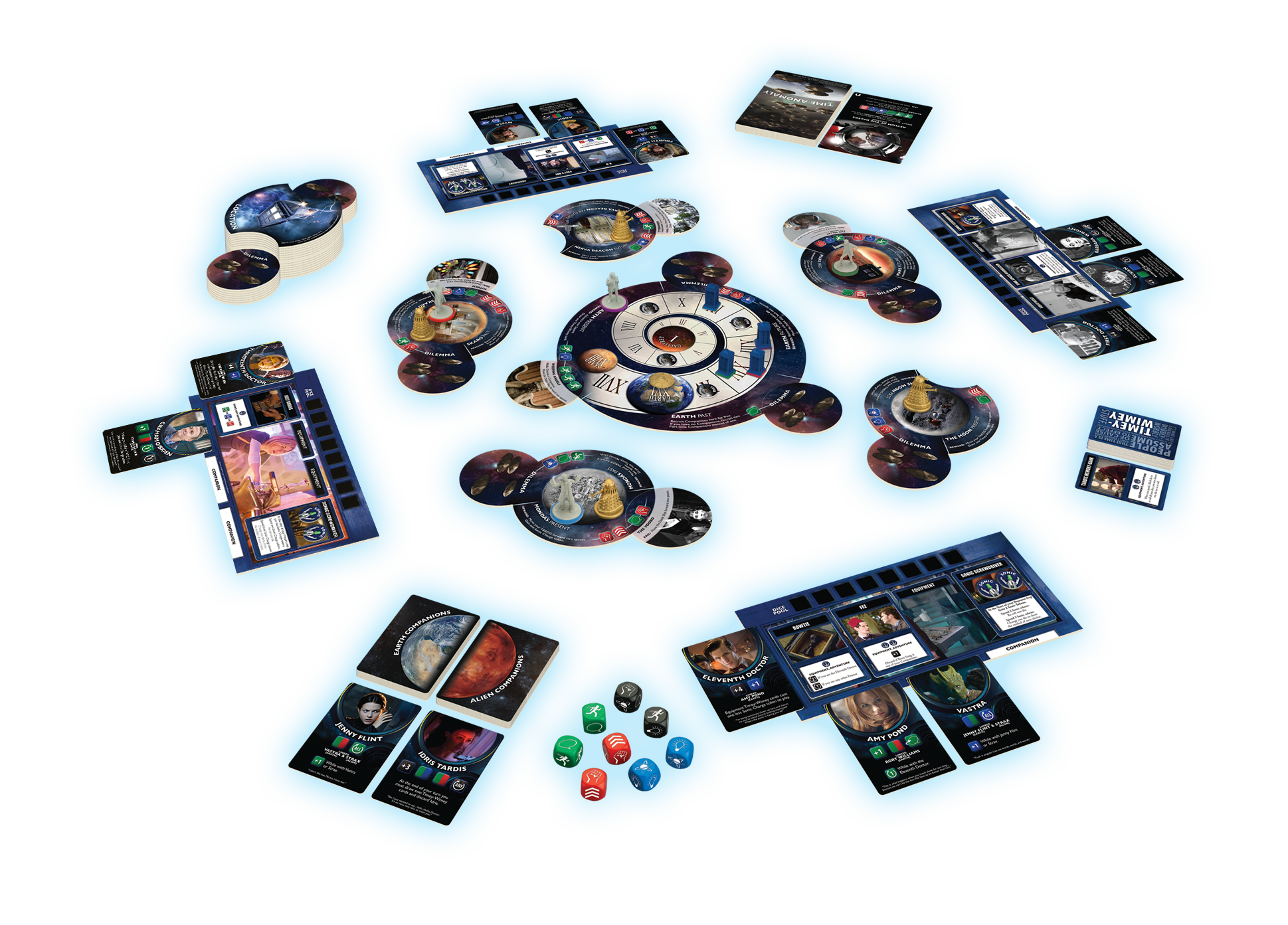 The central play area holds the Web of Time – the track upon which players will race each other and the Dalek ship toward Gallifrey. A trio of Dilemmas attached to Earth’s past, present, and future represent players main means of advancing along the track, with further Dilemmas appearing as they journey through the universe.

Each Dilemma details a number of dice faces, as does the location it’s attached to, which, combined form an adventure. Tackling adventures involves the chucking of a satisfying handful of dice – gathered up through items, companions, and the Doctor themselves – and then simply matching the requirements.

There are some obvious parallels to Elder Sign here, but on the whole, Time of the Daleks offers players a greater sense of control over their actions in comparison to Fantasy Flight’s insanity inducing classic. The Doctor’s iconic companions will be handling much of this mitigation – swapping out standard dice for others and granting re-rolls – but the plethora of Timey-Wimey cards can prove just as critical for success.

Whilst not immediately apparent, Timey-Wimey cards ultimately reveal themselves to be the beating heart of the game – and at times, a particularly cruel one. Games will start off feeling wholly cooperative, but, towards their climax, cards will be played foiling the plans of some Doctors, boosting others, or even furthering the Daleks’ progress in acts of spiteful sabotage.  Of course, this callousness will depend on your play group, but knowing the scope for highly competitive play is there is a pleasant surprise if not a bit at odds with the theme.

The box’s contents are high quality and games will often see players roaring through most of it, something that at once feels generous if lacking in replayability. Thankfully, the modular nature of the locations and Dilemmas, alongside the diverse options for equipping Doctors adds substantial variety.

Gale Force Nine have ensured that Doctor Who: Time of the Daleks feels approachable to a broad audience, thanks to a palatable set of rules and plenty of fan pleasing content, but with its relatively long play-time the game will feel most at home with Whovians already entrenched within the tabletop hobby. With that said, presenting this to mega-fans shouldn’t be a hard sell, and even gamers with a passing knowledge of the Doctor will appreciate its solid gameplay.

A nostalgic and highly thematic game, with some competitive depth lurking beneath for those willing to look for it.

If battling inter-dimensional entities Yahtzee style is your thing, this is a fine step up in terms of complexity.