Plan to be lucky

An idiom that there is beauty in simplicity is proven by Dice Miner. Everything you need to know about the game is in its name. You mine – draft – custom dice that form a mountain made from dice, to then score these dice based on their attributes, to then roll the dice for the next round and draft some more dice. It is, in short, a dice game.

The thematical premise of the game, which involves the story as old as time of dwarves, tunnels and dragons, is almost immediately forgettable. It is only relevant in that you get to choose a dwarf hero character, with a unique asset, at the start of the game. The asset represents two faces of the dice, which will make it easier to score certain types of dice. 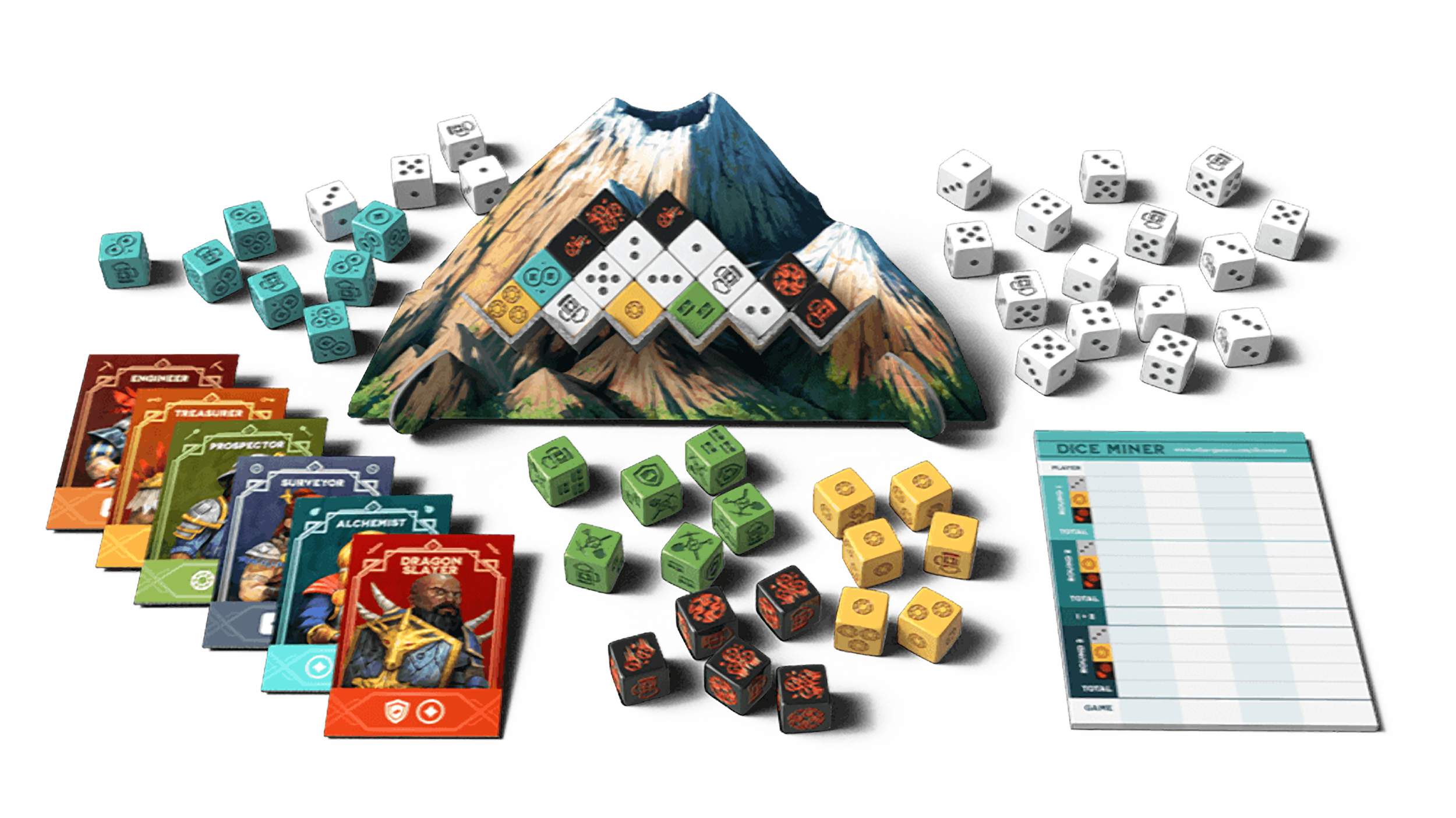 The game alternates between giving player agency in their choices and then mixing everything up by applying lots of luck. Players begin the round by drafting dice from the mountain. Although, there are certain limitations on which dice can be plucked from the mountain’s slope, there are enough options available for players to begin to strategize. Perhaps, they want to start earning victory points by picking up white, Tunnel, dice that score in sets arranged in sequential order. Or perhaps, they opt for a risky play, by taking Hazard dice, representing cave-ins and treasure-loving (and certainly not friendly) dragons. These give negative points until paired with certain green Tool dice. There are also dice that offer utility, like blue Magic dice that grant extra re-rolls. When players have mined the mountain dry, they score points based on drafted dice.

Then everything changes as players take all their dice and re-roll them. A bad roll can feel disheartening. Especially, if the re-roll broke your 15-victory point-giving sequential combination of Tunnel dice. There are ways to mitigate that, by banking some dice, to avoid re-rolling or even using the Magic dice to roll more. However, you won’t be able to save all your best dice and some hard decisions will need to be made. With some luck, you may even end up being better off than you started! However, more likely, you will use your next draft phase to supplement and enhance most recently rolled dice set.

The good news is that there are several more drafting phases, so you can, hopefully, re-fill those gaps in your sequences and turn those angry Hazard dragon dice into positive points once again. Bad news is that you will be re-rolling more too and each round you will have more dice.

Ultimately, in Dice Miner, the luck of the roll will heavily influence the winner. There are choices within the game than can help you improve your chances or make better scoring decisions, but you can’t get attached to any dice outcomes, good or bad. A player that likes to be in control of all their choices and decisions throughout the game, will find Dice Miner frustrating. However, if you love getting a fistful of dice, rolling them, arranging them in combos, rinse and repeat with more dice, then you will find Dice Miner a true treasure.

Dice Miner is all about the joy of the dice: the drafting, the rolling, the combos. Simple, beautiful and to the point.

TRY THIS IF YOU LIKED ZOMBIE DICE

Some games, like Zombie Dice, are just about the joys of rolling dice. Dice Miner follows its stead, celebrating all dice-related activities through its gameplay.