This Galaxy Aint Big Enough for the Both of Us

Of all the games I was expecting a ‘two-player only’ adaptation of, Cosmic Encounter was not high on my list. A game known for its insane special powers and madcap possibilities, it strikes a perfect unbalance that thrives on having lots of people passionately planning and pleading as they race for galactic conquest. Just how on earth do you being to capture that same emotion with only a pair of players? Well according to Frank Brooks and the team, you do it by making it madder, yet somehow more straightforward.

Cosmic Encounter Duel pits two players as alien races battling for their place on the Cosmic Citizenship Council, as they race to be the first with at least one ship on five different planets (or completing a unique challenge based on their alien.) Players will draw a card from one of three destiny decks (starting with red, then drawing from whichever deck the last card indicated) and resolve it, leading to random events, contests for small gains and, most importantly, discovering planets that must be duelled for.

At the start of a duel players will secretly nominate and then reveal how many ships they’re sending to the planet. Next, each player chooses a tactic token and a plan card, both played hidden. Each Tactic token has two options, often an attack or defence with a number value, representing how many enemy ships you attempt to destroy or how much you resist your opponent’s attack. If only one player has ships remaining then they’ve won control of the planet, otherwise whoever has the most ships gets a bonus value added to the number on their plan card, with whoever has the highest value winning the planet and causing all opponent ships to retreat. 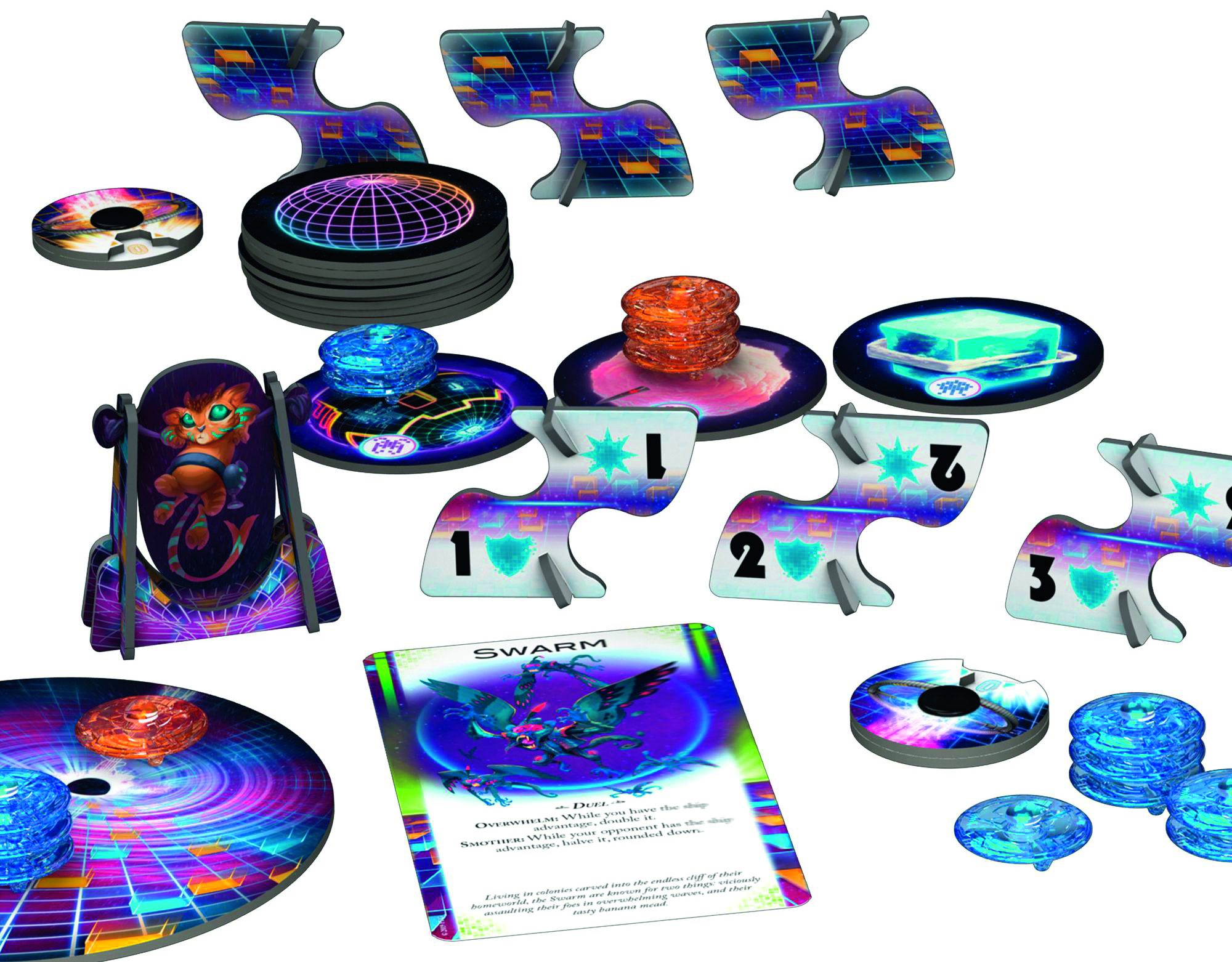 I’m honestly very impressed with the ways the original has been adapted. Whilst the core of having ships and cards carry the meat of combat remains, the wide variety of destiny card types and specially designed alien powers evoke the semi-randomness that comes from multiple players messing around with interplanetary conflict. The game even has a pool of NPC alien envoy cards, of which each player can have up to one supporting them at a time, choosing to reveal the card and its ability only when it best suits them, harkening back to the mystery of which alien someone is using when their power had yet to be revealed.

The game ensures that no-one can ever completely steamroll ahead by using a shifting player title. The Straggler changes hands whenever one player has fewer planets than the other, giving that player the chance to respond to the Leader’s choices and actions in order to better catch up. Whenever a planet is won, it’s also often the loser who will gain a small benefit (such as returning ships back from the Warp or drawing more cards) to help them stay afloat, leading to many games where it’s neck and neck as we barrelled towards are final planet.

That being said, it is still possible to lose through no fault of your own, especially if your opponent manages to hit that lucky combination of alien power and complimentary run of destiny cards. This is still very much a game that treats luck and strategy as equals, which may deter players who prefer one over the other.

If you don’t mind a bit of silliness with your strategic play, this game provides a welcome abridged version of this Sci-Fi classic, making it ideal for introducing new players to the game or for enjoying a short space battle in less than an hour.

Buy yourself a copy here!

Even if this is your first encounter with Cosmic, there’s a quick-witted layer of strategy to counterbalance the zanier aspects of the alien powers and card events that captures the heart of the original but condenses it to a snack-sized two player treat.

TRY THIS IF YOU LIKED Star Realms

Another thrilling two player game that balances lucky draws with skilful decisions, if you could crank it up to 11 and throw in delicious looking plastic spaceships, you’ll end up with Cosmic Encounter: Duel.