Writing about a hospital game during a pandemic is always going to feel weird, especially one you’re playing solo because of self-isolation rules. Clinic: Deluxe Edition is a re-working and tidying up of the 2014 self-published release. The art has been recreated by Ian O’Toole (On Mars, Lisboa, Age of Steam) and does look lovely and kind of charming. There are loads of custom meeples in the box, from the doctors of various colours to denote their skill level, to the nurses, orderlies, and even cars. The board is lush, even if a bit overloaded with stuff. So, it looks great, and everything is really well made and put together, it’s a pleasure to set up frankly – even if it feels like there’s really too many of everything, including the diamond-shaped module and treatment tiles that provide a pseudo-isometric view of your hospital floorplan.

You build up your hospital by placing out three of your action tiles for the order in which you want to build recruit, or admit patients. You can double up on these, and the order can be strategic. There are certain rules to building, and there’s a clever ‘building up’ system, so you can stack your treatment centre to the sky in theory. You buy doctors, orderlies (who reduce running costs) and nurses (to upgrade or downgrade your doctors’ skills a notch to match the patient they’re treating). And of course, the most important thing about hospitals is where everyone parks. 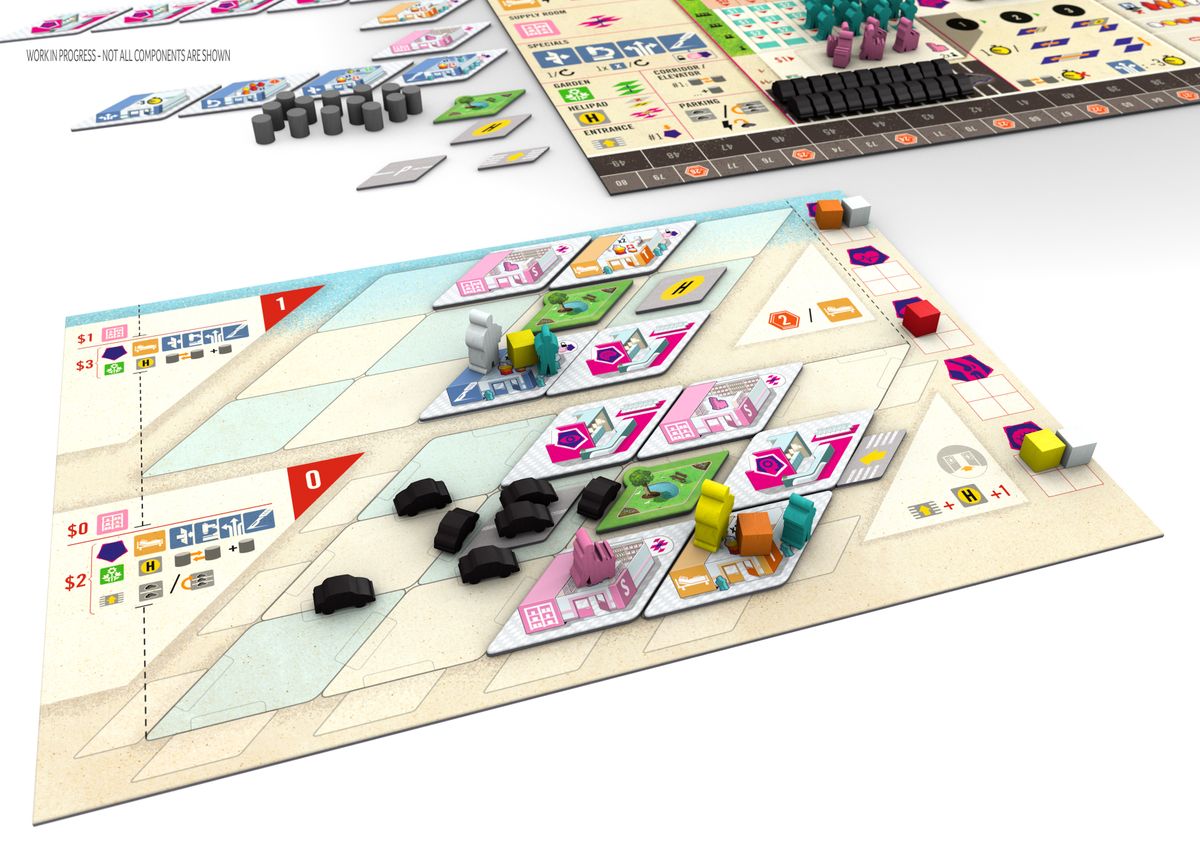 Yes, everyone has to be able to part their car at your hospital, which means that when you admit a patient or hire a doctor, you have to ensure there is a parking space for them, and place a tiny black car on your board appropriately. When they leave, for whatever reason, you need to remove a car. Much like the way patients, before they enter your hospital, can have their symptoms changed on the board (using a calculation which isn’t clear or integral to the game particularly – it’s the number of car parks) there’s a sense that this isn’t really about making sure you can treat people, but more that you’ve got a nice full hospital of people to cure into dollar signs. Which is fine of course, it’s a big crunchy, token-shuffley Euro-style game, the theme doesn’t need to be that tightly tied in – but parking does feel tedious and unnecessary.

This is a game about the business of running a hospital, and as a satire of that bureaucracy it’s very good, the focus is on exactly what you wouldn’t want it to be as a patient – parking cars, the cost of running a hospital, and the time that you lose with someone moving from one area to another. But while the rules (which are, frankly, too complex) have a cheeky tone, there’s not enough pleasure in actually playing out the game, and it’s hard to tell if there’s any kind of real satire of privatised healthcare here. The solo mode, which is simply the basic game in a ‘challenge’ format also doesn’t offer much in the way of its own flavour. There are a handful of expansions included in the box, such as workaholic doctors and zombies, which while an interesting addition to the game, just end up piling on more fiddling, without a payoff.

TRY THIS IF YOU LIKED Abomination: The Heir of Frankenstein

When it comes to fiddling about with too many tokens, Abomination at least represented the grim world of decomposing bodies, rather than Clinic’s over-sanitised bureaucracy.