Ever wondered what you’d get if you crossed a mammoth, a cuttlefish and a Venus flytrap? Or if you grafted the tail of a scorpion and the head of a snail onto the body of a shark? Well, in its own crazy, colourful and messy way, Roméo Hennion and Clément Leclercq’s quick-play set-collecting game Chimere has the answer.

Rather than taking the roles of insane vivisectionists (that would take the theme in an infinitely ickier direction), each player in Chimere is a wizard, tasked by ‘the good king’ with creating the best chimera to become the kingdom’s mascot.

This sorcerous tournament takes place over three years (or rounds), with the wizards given four opportunities per year to splice together random animals. Each season has a randomly selected pair of conditions to aim for with your monstrous creation: one primary, one secondary.

The idea is to create chimeras with a skill set that scores highest in both categories. So, for example, if you got the primary condition ‘giant’s’ for the winter competition, you want the chimera on your winter season board to have the highest weight (represented by a blue weight icon), earning four points. If you got the secondary condition ‘melee’, you’d also want it to have the best score for its ‘protection’ skill (represented by a green shield icon), earning two points.

The tricky thing is, your chimera isn’t valid unless it’s composed of three completely different creatures. If you end up breaking that rule, you have to flip over one of your offending animal part tiles (split into tail, body and head components) to reveal a segment of humble sheep, which is entirely skill-less. Even trickier is the fact that the research phase – in which each wizard snatches animal parts from any player’s facedown stacks of component tiles – happens for everyone simultaneously. Oh, and if that wasn’t tricky enough, each competitor can also sabotage any other player’s chimeras by dumping down useless animal parts on any of their opponents’ season boards. 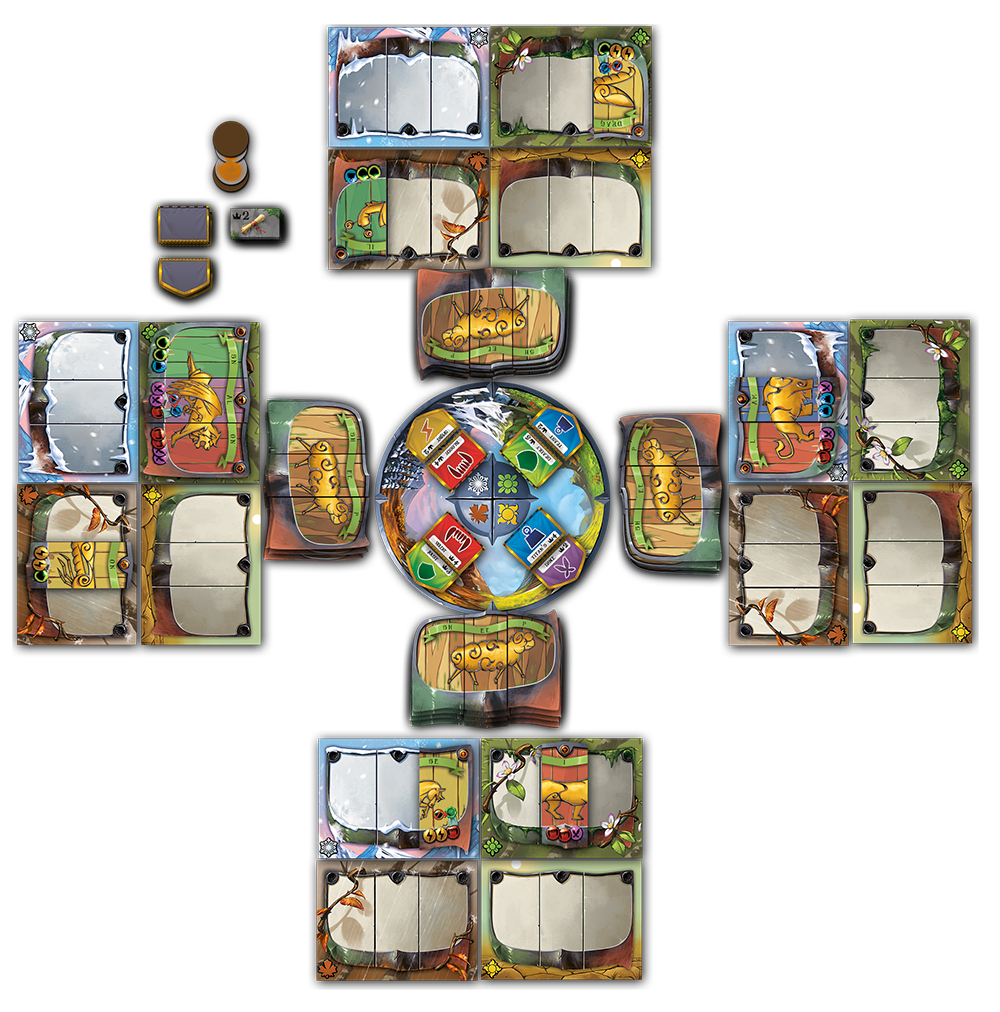 Despite Chimere’s kiddie-friendly look and tone, this phase is inherently frantic and invites frustration, with a high chance of the game’s numerous tiles getting flung to the four corners of the room (either accidentally or through rage), and thus makes it unadvisable for diddier players. At least it's followed by the creation phase, where you have a limited time (determined by a sand timer) to rearrange the beast bits on your own quartet of season tiles and thereby try to minimise any damage done by your opponents.

During this phase, the player who first completes their four chimera becomes the people’s champion, and selects a random ‘Queen’s Award’, which offers bonus points for the most ridiculous chimera, for example, or the most graceful. This element requires each player to argue the case that one of their monsters best matches that criteria, and then votes are cast to decide the winner. But this section of the game feels extraneous, and only invites further discord among players who may already feel quite heated from all that tile-grabbing and spoiler-play previously. It’s certainly Chimere’s weakest aspect, and eminently skippable.

So sadly, this is one of those games that’s only half as fun to play as it looks, especially as it’s so elegantly designed, with bright, cartoonish illustrations by prolific games artist Biboun. There is plenty of entertainment value in forming your own monstrous creations, both in terms of their bizarre look and freaky names (our scorpion/shark/snail combo came out as a ‘scaril’), but the scrabbly, simultaneous-play mechanic – which also, incidentally, requires a lot of reset downtime between rounds – only detracts from its appeal.

Lovely design and a fun monster-creation theme are let down by the messy and potentially aggressive simultaneous-play mechanism.