Like its spiritual sibling series Dark Souls, Bloodborne the video game is an oppressive fight for survival; a challenging and relentless dance with death where pushing for the killing blow on any enemy can result in losing everything.

Bloodborne: The Card Game isn’t quite as unforgiving or brutal as its virtual counterpart, but designer Eric Lang has succeeded in capturing the essence of the best of Bloodborne’s do-or-die combat for a tabletop adaptation that stands alone as a fantastic experience.

What Bloodborne: The Card Game does lack is the video game’s sense of Lovecraftian exploration of the unknown. Inspired by the procedurally-generated chalice dungeons, Bloodborne: TCG’s deck of monsters is similarly created from a random selection of sword fodder enemies and larger foes, with one of five final bosses awaiting at the end.

The big bads each apply a unique handicap that stays in effect for the whole of the game, offering plenty of variety and the need to adjust tactics from match to match. Turning over each new opponent and revealing their abilities is exciting, but can’t quite match the deep lore and world of Yharham on-screen.

Despite this, Bloodborne: TCG more than makes up for the slightly dampened atmosphere with its outstanding gameplay, which neatly translates the video game’s tight combat and ‘one more hit’ mentality to a refined hybrid of deckbuilding and hand management mechanics. 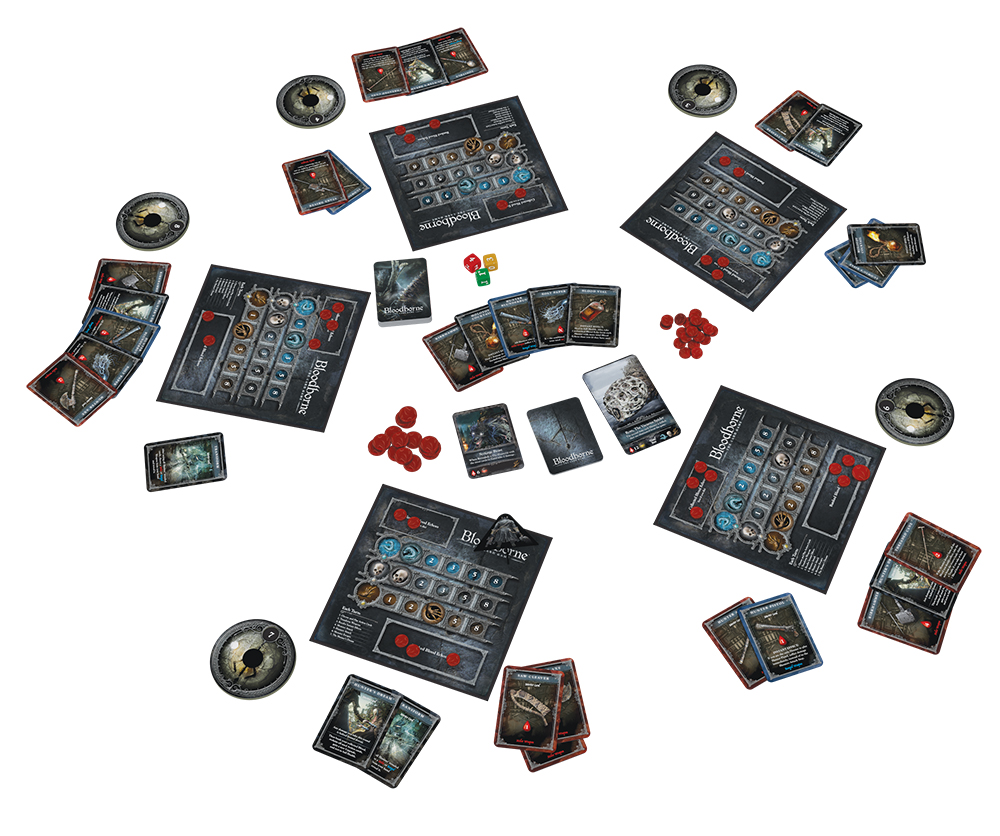 Each hunter starts out with the basics – the iconic saw cleaver and pistol, plus some other weapons and the ability to return to the home base-like Hunter’s Dream – and can purchase from a marketplace of cards.

There’s a catch, though: the max hand size remains at seven, meaning that careful consideration of equipment is needed to maximize the ability to dispatch monsters with powerful attacks but also do so ahead of your rival hunters, or risk losing out on game-winning rewards.

This is intensified by the simultaneous reveal of cards each round by the hunters. Some cards offer instant effects which allow them to be used before other hunters attack (which otherwise go in clockwise order from the rotating first player), and exploiting these abilities is key to earning the most blood echoes and treasures from defeated monsters.

Used cards also cannot be reclaimed until a player returns to the Hunter’s Dream (which also banks their blood echoes, meaning they can’t be lost or stolen), but doing so normally involves sacrificing your chance to attack – wasting your better weapons on weaker enemies can mean losing your chance to really benefit from later foes.

The unpredictable and shocking nature of the beasts – it’s not impossible to be instantly killed while on full health and thus lose all of your unbanked blood echoes – may at first seem unfair, but actually encourages players to take risks to pull ahead of their frenemy companions before the final points are tallied. (Some weapons also deal damage to hunters, meaning smart card play can force your rivals to respawn while you take the glory for finishing off a monster.)

Monsters escape if left alive, taking their treasure with them – this forces players to work together, as a single hunter is never enough to take down an enemy. The need to collect more blood echoes and treasures than your rivals while requiring their assistance introduces almost social deception-like mechanics and choices into what would otherwise be a solid – but relatively shallow – title.

In combining streamlined card combat with these underlying deeper social foundations, Lang has moved away from creating a pixel-perfect answer to Bloodborne’s video game heritage – but in doing so has crafted a tabletop spin-off strong enough to stand alone as a remarkable work.

Bloodborne: TCG is the ideal example of taking creative inspiration from a video game but applying unique tabletop elements in order to create a unique and engaging standalone experience. The card-driven combat is satisfying enough, but it’s in the deeper social mechanics and risk-reward gameplay that Eric Lang’s magic really begins to work.

Publisher: Cool Mini or Not