Beez is the perfect antidote to everything that’s gloomy, sad or stressful. From the moment you place its bright yellow box covered in flowers onto the table, to when you pick up your chunky-shiny bee with delicate see-through wings and all throughout the gameplay, it is incredibly hard not to smile and feel the warmth rising from inside. This is not a game of high strategy, but something to enjoy with the whole family, whether someone has played hundreds of board games or none at all until this very moment. 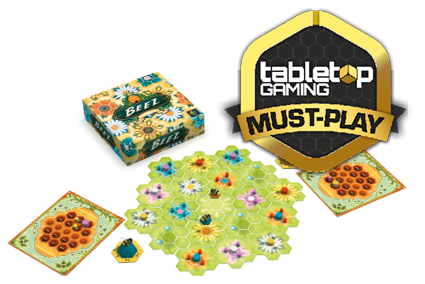 It will be little surprise that in Beez players are indeed bees, doing what they do best: fly from flower to flower collecting pollen and delivering it to their hive. Players get awarded points based on how much nectar they collect and in what patterns they arrange it inside the honeycomb to match various objective cards. Some of these are public, and so all players compete to achieve them, but others are specific to each player and are revealed at the end of the game. So far, this sounds like a very by-the-book gameplay that has been many games before, yet there is one simple detail that makes all the difference: the bees movement.

A bee miniature stands on a little hexagonal hive piece, each side of which notes the number of spaces it can move in that direction. As the bee will be constantly re-oriented each turn as it completes its flight plan, no side has a permanent number of movement spaces allocated to it. This way players always have to think at least two steps ahead and consider how to arrive on a flower to better position themselves for the next move.

Within the honeycomb, the collected nectar is placed based on the number of spaces moved by a bee that turn. So, if by a mid-game a player has completed the whole row corresponding to a movement of one, they cannot pick up nectar after moving one space anymore. Add to that various patterns and colour combinations needed to achieve objective cards and you have one honey-sweet brain scratcher of the game.

The key here, however, is the balance. In Beez, the basic actions are simple and clear: move the bee, collect the nectar. The execution of that action is the puzzle piece, which completing well earns victory points. Objective cards strike a good balance of being challenging, but not impossible. By the end of the game, every player will manage to score most of them, adding to a sense of achievement even if they have not won the game itself.

This attitude of perfecting something simple to make it special is carried through to the game components as well: they are straightforward and very functional, but every element is detailed and thought through. The bee miniatures are good example of this. They are basic: just a couple of rounded pieces stuck and painted together. Yet, the bees’ bodies are nicely polished and shiny, and their wings look delicate yet are made of a pretty sturdy see-through plastic. The numbers of the hive pedestal are well-sized and distinguishable, so they clearly stand out among the kaleidoscope of other colours on the board. Very functional and extremely adorable.

At no point does Beez pretend to be more than it is: an abstract puzzle-game with a cute theme. There is something very joyful in that honesty. This is a game without any excesses or fancy components. It has quiet confidence of its design and looks to showcase a game filled with warmth and bright colours, in which everyone is capable, with a bit of hard work, get a taste of sweet victory.

A perfect combination of accessible and challenging gameplay, Beez is joyful, bright, colourful, fun and daring – everything one needs to offset the gloomy days.

TRY THIS IF YOU LIKED HEY, THAT’S MY FISH!

Snatching that fish right under your opponents’ noses was a lot of fun in Hey, That’s My Fish, and Beez is here is up the stakes with slightly deeper gameplay and sunny looks.