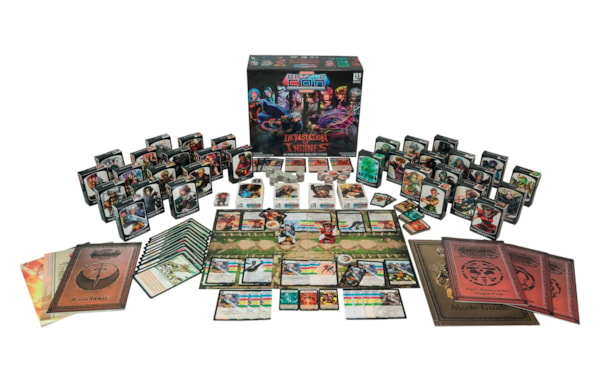 A punch above the rest

Fighting games are a bit of a show-off genre. They always want to entice with more characters to fight, fancier abilities to try, new decks to hunt or even shiny cards to collect. Get really into Netrunner, UFS style deck or Pokémon, and you are likely to find yourself among a small mountain of cards, having invested quite a bit of money, knowing intricate details of combos and attack moves and speaking a language your non-fighting friends stopped understanding some months ago.

BattleCON: Devastation of Indies comes to all this splendour, drops one big box on a gaming table, and kindly asks other fighting games to hold its beer. This game will never make you complain you are not getting enough for your buck. Quite the opposite, after covering the floor of a medium sized-apartment living room with cards and tokens to sort (which has been scientifically tested for the purposes of this review), you might complain you have too much. Yet, it is when you open the quick-start guide which will comfortably cover the span of the gaming table, that the panic sets in: how can one possibly comprehend all of this?

There is only one thing to do: take a deep breath and spend a cathartic hour sorting the decks and tokens of over thirty characters into their respective little boxes. You will never have to do this again, and following the initial unboxing, the game will take a minute to set up at the most.

A couple of rounds into the game itself, it becomes clear that despite the initial shock from the quantity of content, it is not just entirely easily digestible but also very newcomer-friendly. Every character comes with a compact deck of their unique styles which they combine with generic bases to create fighting moves. The wording on the card like ‘power’, ‘priority’ and ‘guard’ perform as one would expect them to, with some minor rule clarifications. What might take a bit longer to learn is the abilities on each card and in which order they activate, but even here terminology does a good job of creating a logical round sequence that is easy to follow.

Unlike, many other fighting games, in BattleCon learning your characters feels like an integral part of the game, almost as important as the fight itself. The game comes with an impressive roster of characters, all very different to each other. Some fight with swords, others with technology, some summon zombies or use magic, and some hit so hard they have to give their opponent an advantage. Opening a character box is a delight because you are always eager to learn what makes this character special, and it may take a game to get there, but the next time you fight with them you will know their best moves and weaknesses. Characters also range in complexity – which is clearly marked on their box – so with more confidence, you can progress to harder fighters.

If you somehow have gone through all the characters, then the fourth edition of BattleCon has even more in store for you. There are multiplayer matches that expand the game up to five players, boss scenarios, several dungeons crawls and arena cards that add an extra level of challenge to normal battles. The box contents are also a trove of additional information with little character backstories and narratives that expand this world and make it feel truly bigger than just one battle.

It may be a big box, but it will be all you need, because BattleCon packs a ton of content to try out. It is the testament to the battle system itself, that with a fourth addition it is going stronger than ever, and the system is malleable enough to be able to incorporate such a range of modes. If you want to get into a fighting system, this is the one to explore because it will support your battling journey as a novice fighter all the way to when you ready to face advanced opponents.

A new-comer friendly system, BattleCon: Devastation of Indines box contains all you will ever need to enjoy this game and more. With modes and characters galore, this is a fight you will want to join.

TRY THIS IF YOU LIKED COWBOY BEBOP CCG: SPIKE VS VICIOUS

If you tried any other fighting games, especially those as complex as Universal Fighting System, then BattleCon’s expansive universe will be an exciting new exploration. 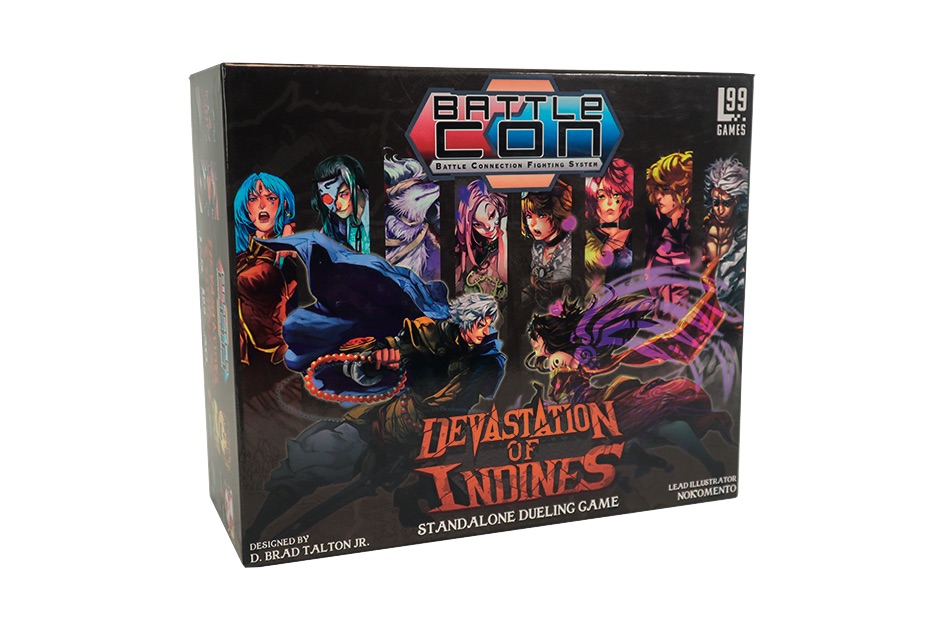