Frank Miller’s The Dark Knight Returns is considered one of the pivotal points in graphic novels, a sign that comics could be something for adults to enjoy and treat as ‘art’. His work has also been called bigoted, and can fairly be described as ‘unhinged’ on occasion (The Dark Knight Strikes again, the sequel to the comic on which this game is based, is an example of this). The comic is about Batman returning to fight crime once again, having retired after the death of Robin. But he’s got old, and he’s not faster than the bad guys any longer – meaning Batman simply has to become more brutal. Whereas a younger Batman would leave the garden variety thugs neatly piled up with only a sore head, here he is ending or irreversibly changing lives. It’s a story of a man past his prime giving up the last of what he has left in him – maybe to make things better for the city, but also out of ego. It’s about him knowing he will lose in the end. Attempts to put it on screen are often slight failures or miss something of the spirit of the story, and that’s partly because they sanitise the somewhat nasty heart that thumps life into it.

But that is not the case here, in this (mostly) solitaire retelling of the story the rulebook begins with a warning and a description of ‘how to lose’. 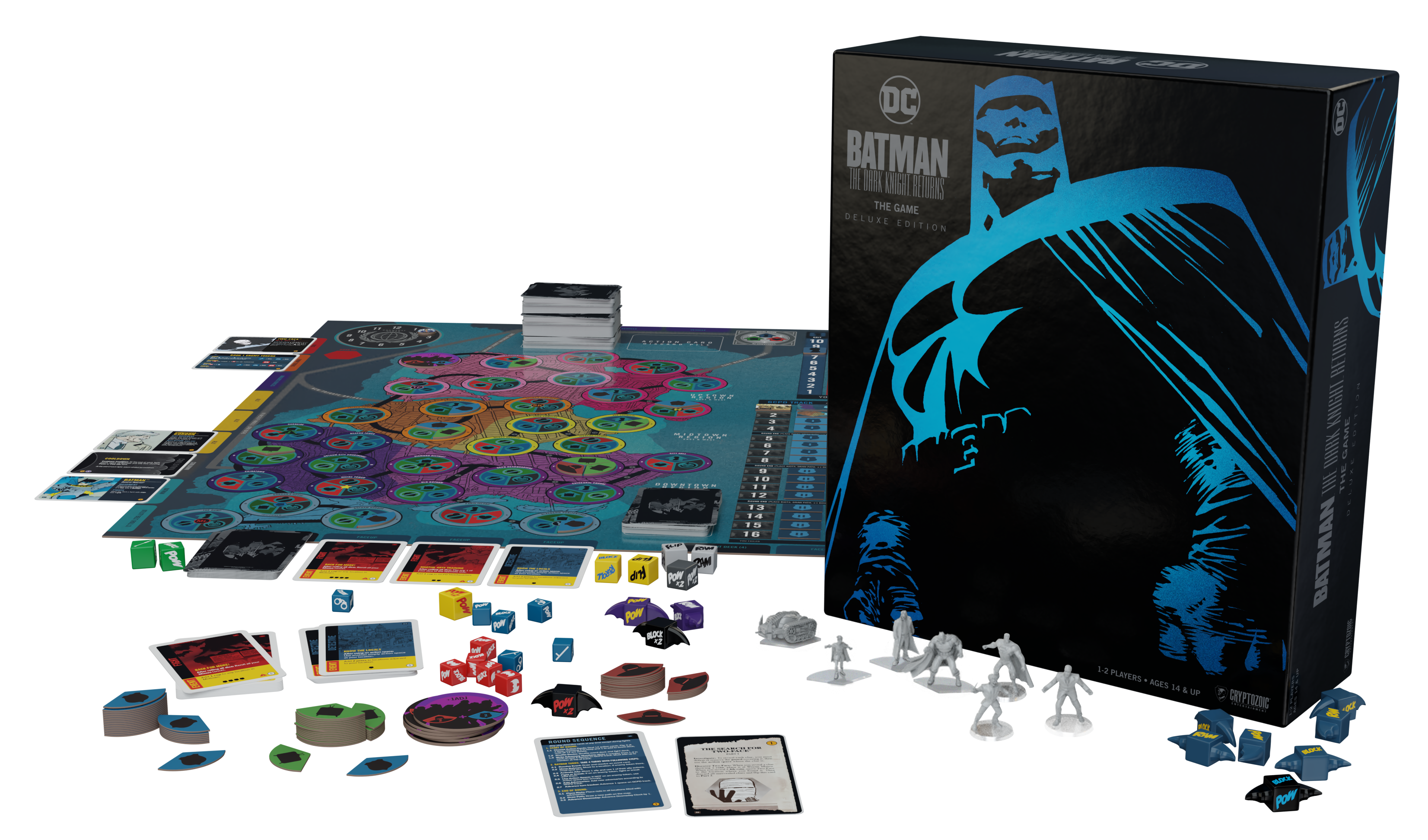 The game comes with a huge board displaying Gotham, broken up into regions and subsections between them, within these are individual locations cut into three pizza slices. The slices all have a sort-of-worker-placement action on them that you’ll take as part of your turn. But before that, the city is overrun with mutants, bad cops and press that you’ll need to take down (well, not the press, just sneak past them) and find the boss of each chapter.

Combat is a classic ‘rounds of dice rolling’ thing, although, you always have a chance to retreat from normal thugs. Batman rolls D4s – six sided dice with two sides taken up by ‘batarang’ wings – the enemy rolls their own coloured dice and you compare blocks and ‘Pow!’ dice to tot up damage, or remove dice from the enemy dice pool. You work out how many mutants or police you’re fighting by looking at those in the space you’re in and those adjacently connected in a kind ‘Pandemic if you were punching the virus’ kind of way.

Standard stuff you might think – except for the fact we’re drawing on the board as we go. At the end of each round a new path can be added to the board, which is entirely wipe clean. You’ll be upgrading space by simply adding a “x2” next to it, deciding how many enemies to generate each turn by scribbling that in the GCPD spawn box, changing the boss health when you bash them in. It’s simple, but it feels revolutionary. New paths make movement for Batman and his allies easier but also creates a bigger network of enemies.

Throughout the game your choices are simple, but they can be agonising. There’s only so much you can do – but you’ve got to get it right. Your dice that hit go into cooldown, meaning you’re rolling others that might hurt you instead. Is it time to get out of there, or to stay and fight, clearing out as much as you can? 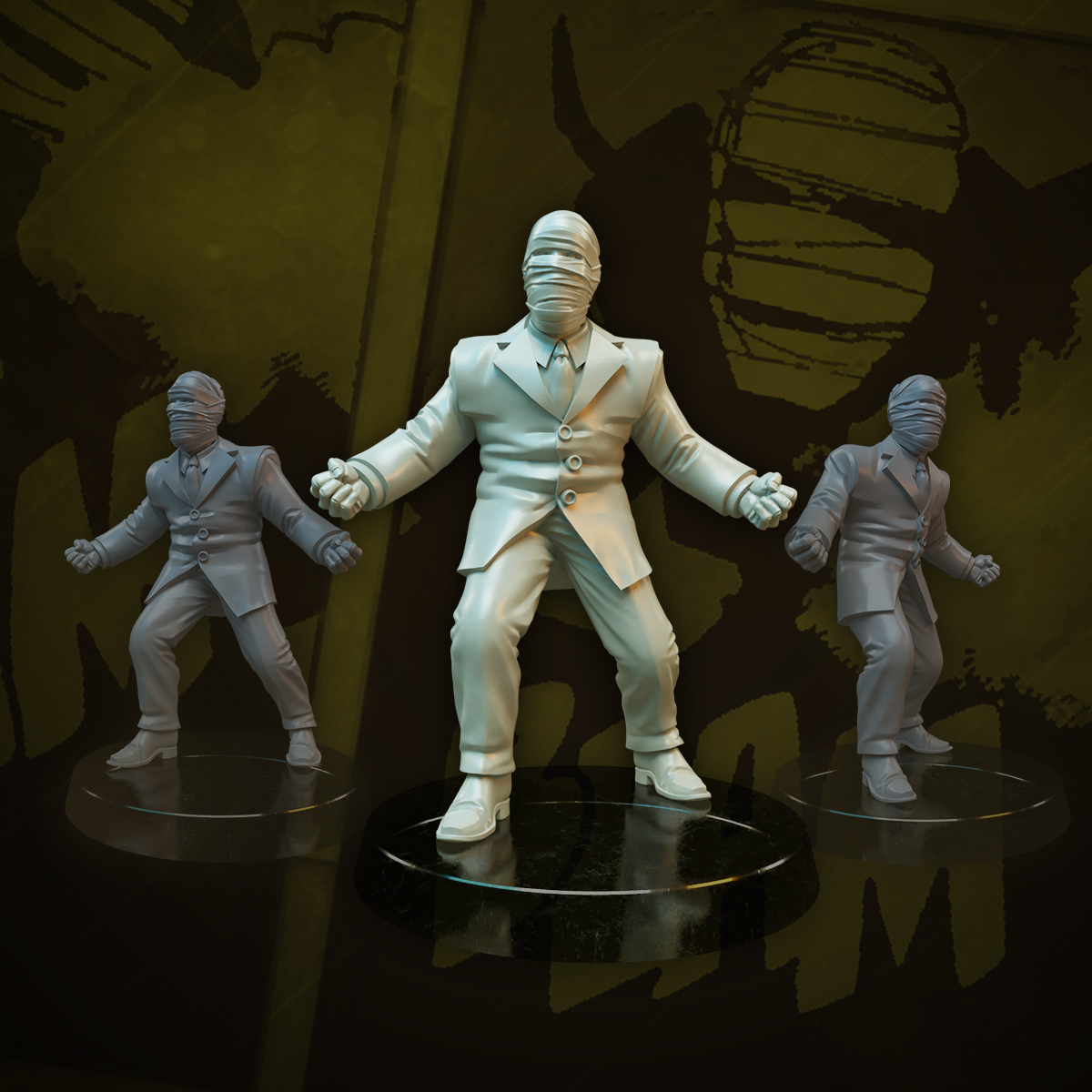 The game comes with four books – each with their own Batman powers, set up rules, and boss. The first boss, Two Face, needs to be tracked down by finding clues across the city, whereas the second – the mutant leader needs their strongholds broken down to gain access to a final showdown in the dump. Each book brings more danger and your batman never really recovers from the worst of the battles.

Which is the other wrinkle, and one you might not really appreciate until you get ready for book two, which is – the board stays the same between sessions. If you make a mess of the city, allow riots to break out or just get really beaten up, you’re going to be bringing all that with you to the next chapter. After our successful run in with Two Face our Batman was down on all three tracks (grit, health and sanity) to a point of precarity. At the start of the next book you’ll gain five points back in areas of your choice, but we did have to limp back to Wayne Manor for a minor recharge (and to pick up a bat-copter).

Power-ups like the bat-copter or bat-tank can be gained by meeting certain conditions, or just by returning home to the manor. They operate as powerful one-use hits, bridging the gap between Batman’s poor state of health, and the obstacle of the enemies. Deploying them can get you out of trouble, for a while at least.

It’s also a game that completely respects the player. While there’s some randomisation at the start, everything else is more or less a choice. And when it’s not a choice it’s a specific instruction. For example, when adding whichever flavour of opposition token to the map at the end of the turn the player picks where they go. It’s a kind of management puzzle that begins by being helpful, but eventually traps you. It’s another clever little nudge that makes the game impossibly smooth to play.

It’s so smooth in fact that I would compare the experience closer to playing a video game than a traditional solo board game experience. I was entirely invested, I wanted to get back to it when I was away from it, it had such expert flow in my options and choices that I barely glanced at the rulebook after each scenario’s set up.

The art style is the muted, 80s colour palette of the comic – some might be put off by this, but it will be instantly recognised by those who like the original that inspired it. The deluxe edition (£110 RRP) comes with some lovely miniatures, but the art standees great and the standard edition (£65 RRP) is probably the one to go for if you’re not a painter. And yes, there is a VS mode, where one player controls the villains and the spread of mutants, press and police – and plays a hand of cards for various actions of the boss. Traps are the most interesting here, making Batman’s goals a little less obvious.

Batman: The Dark Knight Returns Board Game is a stunning piece of work, a true gift to solitaire gamers, and an impressive retelling of the source text. Frank Miller remains a divisive figure, but this game is not. This is the solo Batman game as far as we’re concerned. Whether it marks a new point in comic book games on the tabletop is yet to be seen.

An exquisitely formed retelling of the classic comic book, with all of its slightly rotten heart intact. An outstanding example of a pure solo game.

Sort of, anyway. If that sense of the game getting totally out of your way is something you’re interested in, then it’s time to grab your bat-dice.