A little out of tune

Bardsung is a game of two sides. The first is a game designed by dungeon crawler fans for dungeon crawler fans. It feels like every game in the genre ever released was meticulously studied, analysed, taken apart and then reassembled into what is meant to be the ultimate dungeon crawler experience. Although there are plenty of familiar elements – even the combat system is rooted into the Fifth Edition ruleset – when they are put together, it doesn’t feel derivative because every element is a puzzle piece that when fitted together forms a complete picture.

Bardsung is also unafraid to add its own flavour into the mix. It, for example, has a roster of all female characters. While their classes are still based on the traditional archetypes such as rogues, fighters, wizards and others, their skill and combat ability cards have been crafted to give each character a unique behavioural pattern. Through the course of the game, each character will be able to upgrade or get new cards added to their roaster. They are also not restricted to the cards belonging to their class only. So, if later in a game, a wizard is feeling a bit feistier, they could get an ability from a fighter class. Bardsung is a campaign game, however, so whichever character you choose, is yours until the bitter end.

Once the players have chosen their characters, they, without much preamble, set out on an adventure to explore dungeons, face adversaries, discover secrets and, of course, find treasure. Bardsung does not disappoint with its amount of content, with a thick story book filled to the brim with campaign chapters with dedicated set ups and monster roster, including bosses. Each chapter of the story usually consists of several levels, during which players will assemble a dungeon out of modular tiles and complete a dedicated objective. In general, each level will require characters to cross the length of the table-hogging board from one side to another, however many dungeons use variation on this basic premise. For example, Timer mode limits players to a certain number of tiles, while Outlast mode challenges players to survive a certain number of turns. There are also boss rooms, with some fights requiring players to turn the whole board over to reveal a dedicated fighting arena. 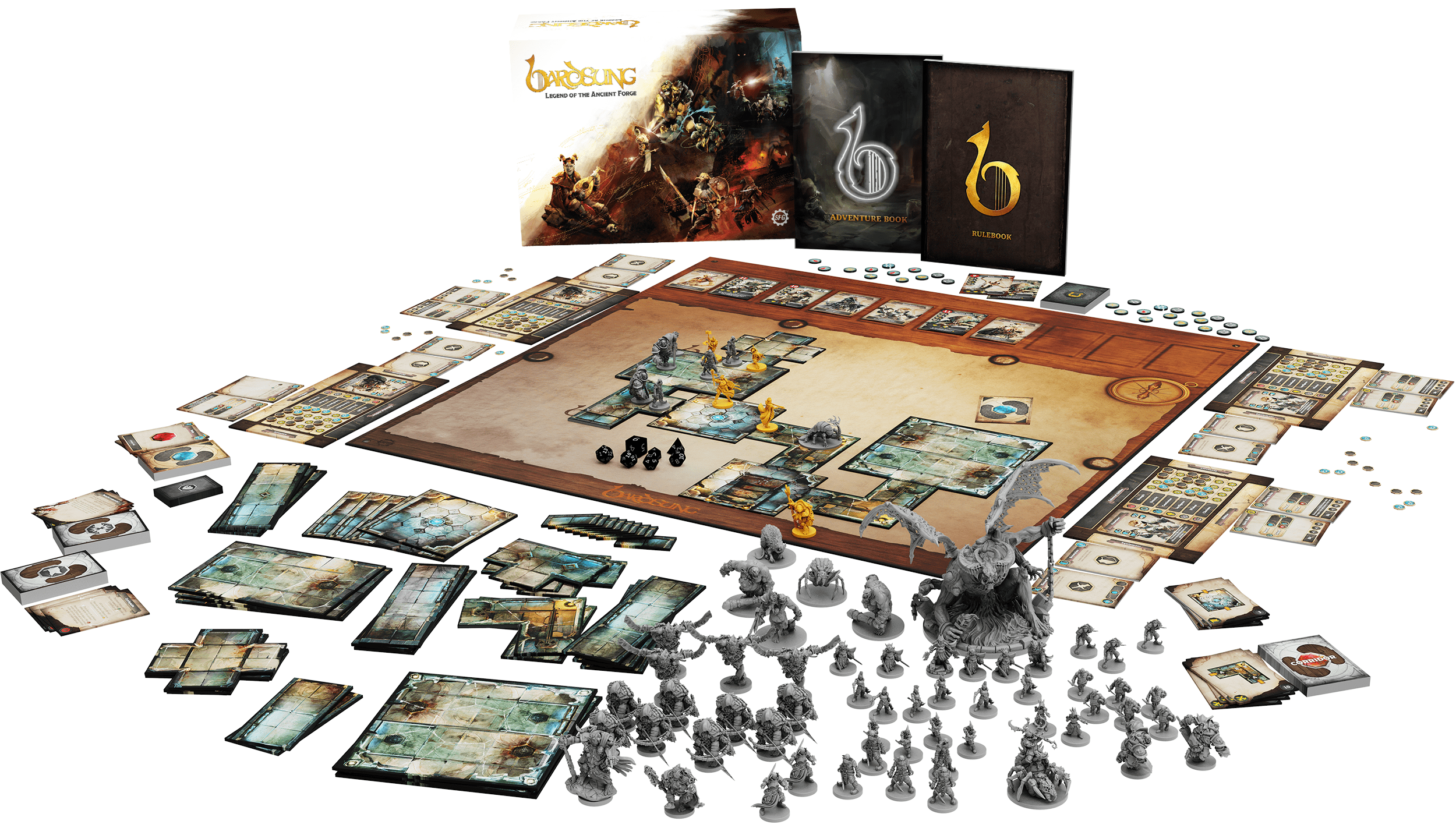 Bardsung’s story is also told within these chapters, sometimes requiring players to solve the puzzle or make decisions. As a result, some story paths may be cut off and consequently Bardsung has four different endings to reflect each different journey. Players could come back and replay the game, try other characters and make different decisions. That is, if the first run doesn’t tire them out because here the second side of Barsung reveals itself… and it is messy.

All dungeon crawlers or large narrative games have a level of messiness. When you are dealing with a huge beast of a game that aims to plunge you into its universe, that level of immersion comes at the price of some clunk. Even, perhaps, one of the most acclaimed games in the genre, Gloomhaven, is an absolute pain to set up, especially the monster combat elements. So, upon receiving the promisingly enormous Bardsung game box, there is a lot of good will that comes with anticipated excitement of exploring that game and the story within.

Yet things get messy from the onset. Bardsung begins the play-along tutorial that teaches combat and exploration. Only, unlike games like Magnate where you really get to learn rules while playing the game, in Bardsung this is more akin to reading the rules and then trying a little demo. The tutorial also only covers the basics of the game with additional rules located in the campaign book. So, if you need to look something up during play, you will first need to remember which rulebook that rule is in and then try to find it. 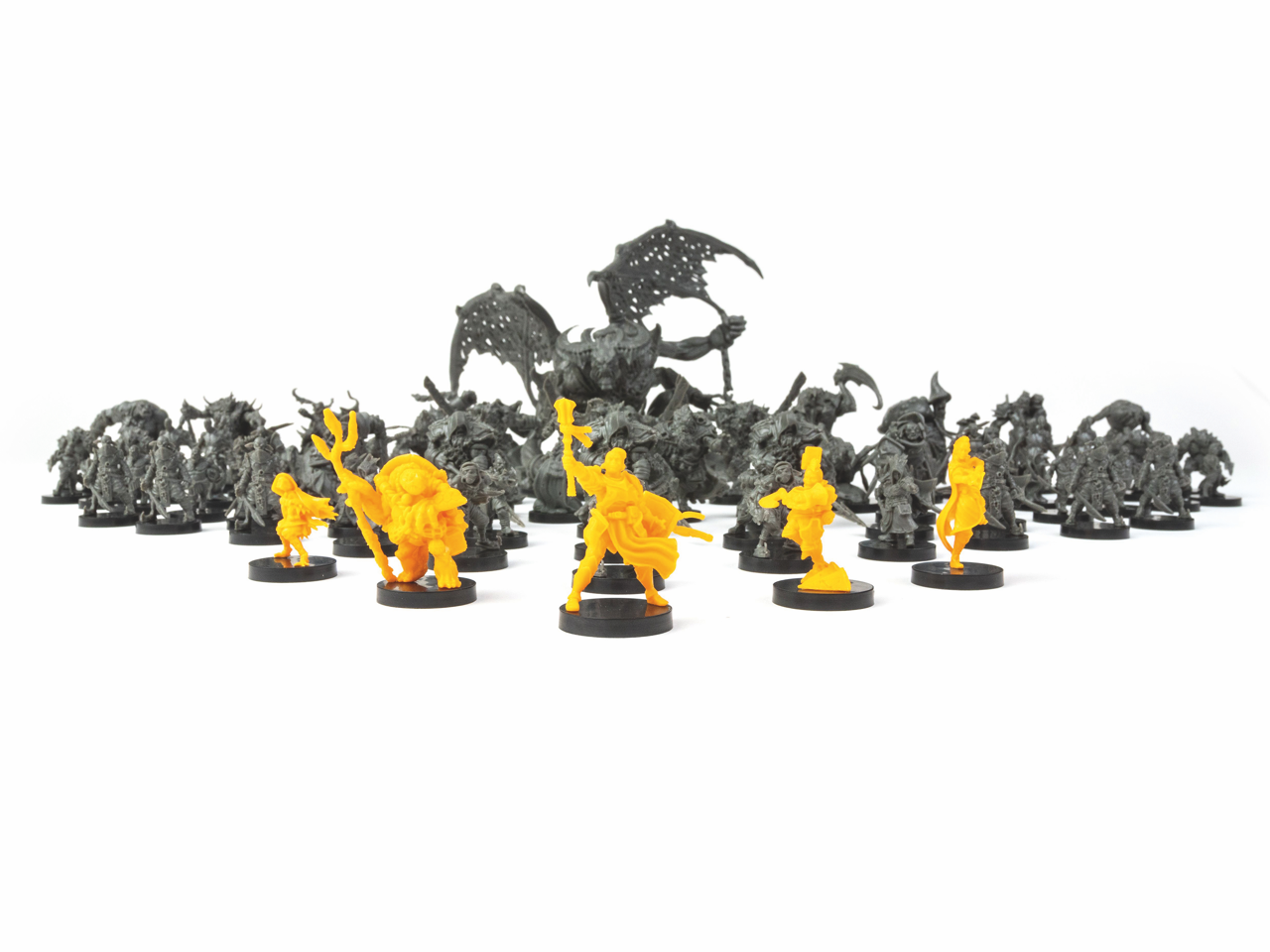 The quality of the game’s components also varies dramatically from ‘this is a genius idea, why has no one done this sooner!’ to ‘what were they thinking?!’ Having dedicated trays to store attribute tokens for each character throughout the whole campaign – genius! A massive board where it looks like a low-quality image have been blown up to the point of pixelation – what were they thinking? Character design, the art direction throughout the whole campaign book – genius! Tiles where zoning is so unclear you need a separate cheat sheet to decipher them - what were they thinking?! Also, can we please,  please, figure out a better system to track enemy damage than putting tokens next to their minis? It makes the board look messy, it is annoying to have to move tokens when monsters move, and when there are several enemies on the map it is easy to confuse which tokens belong to who.

Perhaps, these clunky bits of Bardsung could be overlooked if the gameplay still sung strong, but not all its notes are complimentary. Sure, it is a huge game with hours upon hours of content, but not all of it is essential. In fact, some parts feel like straight up padding. In chapter three, for example, players could play through three dungeons before encountering any of the main story. Considering that each dungeon will be about 40 minutes at least, this is hours of play exploring randomly dealt tiles and fighting against the same group of monsters until something new happens.

The combat also falls flat. If you are wondering how something that is essentially D&D combat cannot be fun, there is a simple explanation: D&D has a DM and the DM, besides everything else they do, controls monsters during combat. In Barsung, each monster has a behaviour attribute that makes them act slightly differently (which is good!) but players also roll to defend for their attacks. The act of attacking is so like the act of defending, it is easy to lose track of who’s turn it is. Every fight consists of constant rolling that when combined with initiative order being changed each round, leave very little manoeuvring for tactical thinking. The ability cards somewhat alleviate this by offering players many ways to attack or even manipulate the rolls results, but this doesn’t change the fact that physically all you are doing, all the time, is rolling dice, and hoping for the luck gods to be good to you.

When repetitive combat combines with plodding dungeons, the game slumps. Glimpses of excitement pop up every now and then but reaching them takes hours. Bardsung strives to be an epic journey but tries to achieve it in the wrong way. You don’t need a large volume of content to prove the depth of your lore. You don’t need a huge board to prove you have scope. Countless tokens and miniatures don’t immediately equate to variety but will almost always be messy. Bardsung has an immense potential, but it has not resulted into the perfect song yet.

Ambitious in theme, scope and gameplay, Bardsung is too unpolished and messy to be the swan song of dungeon crawler games.

TRY THIS IF YOU LIKED SHADOWS OF BRIMSTONE

If you like epic dungeon crawlers that can effortlessly take over your life (and shelf space), like Shadows of Brimstone, then maybe you are ready for another adventure that can give bards something to sing about.