Designers Kristian Ostby and Eilif Svensson have been on my radar for a while now. Back in 2017, the criminally overlooked mid-weight Eurogame Santa Maria swiftly slipped into my ‘top five games ever’ and has stayed there since. The duo have also demonstrated a breadth of complexity across their releases; from the light flip and writes Kokoro: Avenue of the Kodama and Trails of Tucana, to 2019’s weighty The Magnificent. With the addition of designer Kenneth Minde, Bad Company expands this breadth further still, as a game somehow possessing the scope and sense of reward of a heavier title yet with the utterly smooth mechanics of a gateway game.

In its simplest guise, Bad Company is a dice-based tableau-building game – in the same vein as Machi Koro and Space Base. Thematically, players are in charge of their own gang of criminals, currently on the run from the police yet still haphazardly pursuing various heists on their way to escape.

Each gang is displayed on a police lineup-esque player board composed of two halves: one numbered one to seven and the other covering eight to twelve. Each round will see one player rolling the dice, forming two pairs of numbers and activating the corresponding criminals, whilst all other players activate one. Through this process, players will gather up the various symbols needed to complete heists and tasks, gain income, or advance their escape car down the road.

At the start of the game each criminal possesses just one speciality. Number five for example might display a single steering wheel symbol used for advancing the gang’s car. Throughout the game though, players can progress their recruiter meeple through various neighbourhoods and ‘upgrade’ their gang members. Doing so involves drawing three upgrade cards and choosing one to place atop the matching number on the gang board. Alongside making these curious and diverse criminals become comically tall, upgrades also add additional symbols and end game points – a vital design choice which encourages players to diversify rather than stack everything on the commonly rolled number seven. Over time, gangs will grow increasingly more powerful and ridiculous looking in tandem with certain dice rolls becoming tantalisingly lucrative. 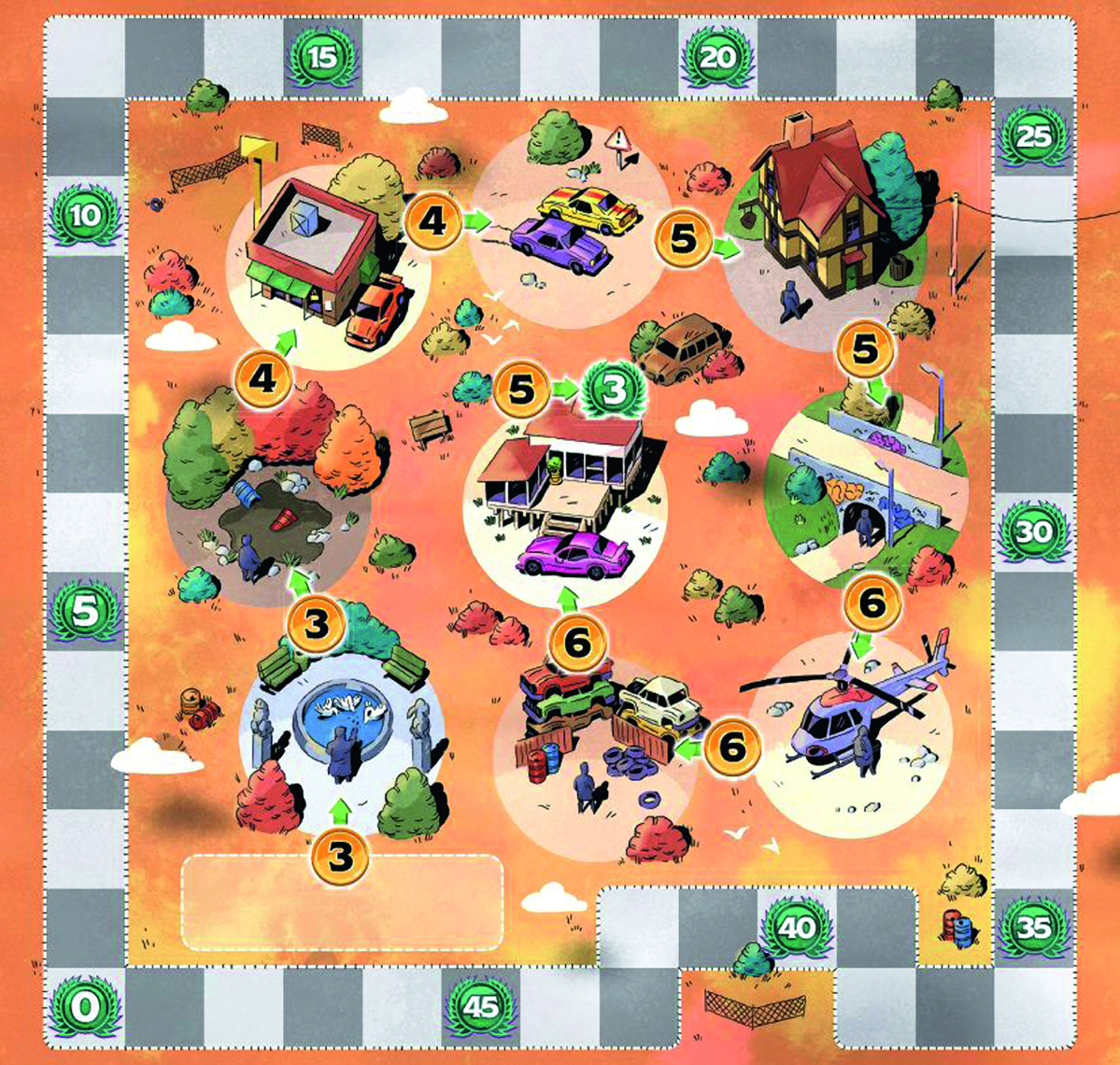 Noting its simplicity, you’d be forgiven for assuming the game to be a functional but perhaps fleeting and forgettable bit of fun. In truth though, its simplicity broadens its appeal, bypassing complexity in favour of ratcheting up the fun factor from the get go. Firstly, there’s essentially zero down time here - even with the full count of six players. Most actions in the game occur simultaneously, and furthermore, with each roll of the dice opening up at least one possibility for all players there’s always something important to be doing every turn. Even if the available dice combinations do little to immediately advance your active heists, there will always be something you can do to help in the long run. Pair this with the fact that die rolls can be mitigated by spending coins and it soon becomes clear that Bad Company succeeds at avoiding the disheartening aspects of luck apparent in similar games.

By taking what is essentially blind gambling and infusing it with a surprising amount of choice and control, Bad Company has managed to retain the inherent addictiveness and simplicity of its central mechanic whilst imbuing it with the depth needed to demonstrate and, indeed, promote modern game design. But more importantly, playing and teaching Bad Company has given me some of the most straight up fun I’ve had from a game this year.

Simultaneously clever and silly, this is modern tabletop fun in its purest form.

TRY THIS IF YOU LIKED MACHI KORO

If you like the simple thrill of chucking dice and watching things grow, this is certainly worth a look.