ZineQuest returns at an unusual time of year with a wealth of new RPG zines to enjoy. We take a look at just a few that you can find this year.

ZineQuest is back after some unusual amendments and announcements this year, now having launched in line with GenCon. The annual event sees TTRPG creators take the spotlight, posting projects to Kickstarter, with the requirements being merely for an unbound, folded, stapled, or saddle-stitched RPG zine on A5 (or smaller) paper – but in reality, it's a collective posting of some fantastic new TTRPGs from indie creators. These are not only ways for readers to discover new TTRPGs, and grab a bargain, but also for creators to get some well deserved attention, alongside a chance to try something potentially a little different.

Plus - it works! Informal statistics suggest that over 90% of ZineQuest projects get funded, and if you happen to have read our review of the Must Play awarded Apawthecaria, you might recognise its foundations from Apothecaria, a ZineQuest release by Anna Blackwell.

But what's available for you this year? We've taken a sampling of the projects you can find at ZineQuest so far, though there will likely be plenty more before the month is out. 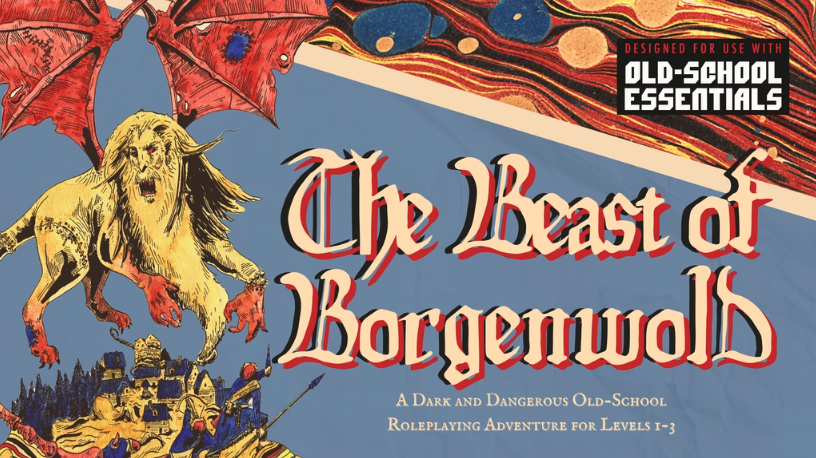 Strangeness and terror from beyond the grave! A dark and dangerous adventure for Old School Essentials.

Borgenwold is cursed, the project immediately tells us. The tomb of a huntress has been robbed on the instruction of her greedy grandson, releasing an undead reanimated manticore on the town. It, of course, is "a being of infinite malice, leaking sawdust, varnished, reeking of chromium salts and embalming fluid", and only by descending into the tomb and destroying the silver hunting horn may the Beast be laid to rest.

The adventure is written for Old School Essentials and is suitable for 2-4 sessions of play to complete, or as part of a larger campaign.

Who is it by? Henry Menear

Where can I find it? Can you save us from the beast?

A Torch In the Dark 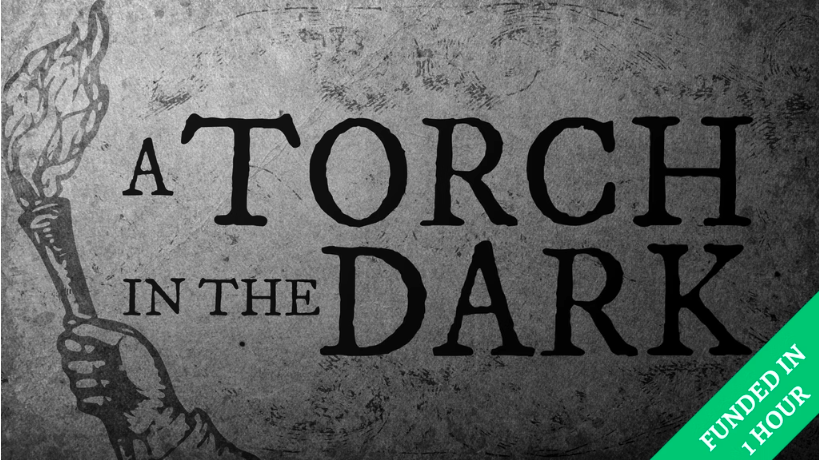 Imagine being thrown into the turmoil of a post revolution, cursed city - and that's just the scenery. The People's Revolution has overthrown the nobles and its Emperor, but the latter died cursing the lands, leaving the only coin left buried with the undead Lords who built the empire. "Delve into the dungeon, twice-kill the dead Lords, and secure the city for the People's Revolution!". You'll be delving for gold, overcome encounters, and pass through nine dungeon locations - surviving each one just to delve again. You may recognise this, as previously created in 2020, but ZineQuest offers a chance for it to be brought beautifully to print, with revised look, layout, art, and rules.

This adventure uses a variation of Blades in the Dark.

Who is it by? Michael Elliott

Where can I find it? Survive! To delve again...

The Traveler's Guide to the Goblin Fells 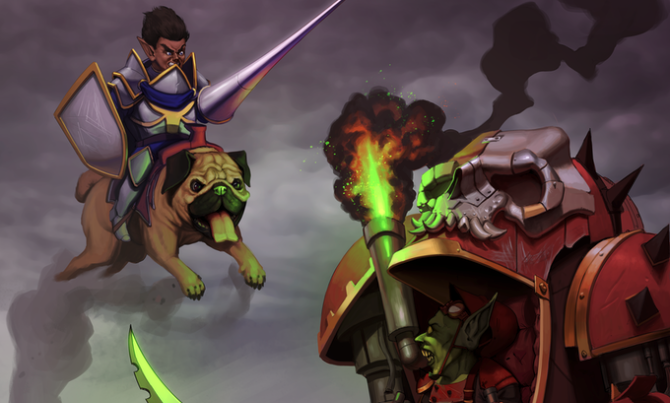 If goblins building mechs doesn't catch your attention, perhaps the halflings riding giant pugs into battle will do it. You've got plenty of options with this one - building an aggressive security system with ready made traps and poisons, create a magic powered mech and more. If you've wanted to incorporate funky features into your game, or even just fancied a springboard of eclectic ideas, this appears to be your opportunity to find it. Plus, the opportunity to be a Pug Knight riding into battle on giant pugs, poodles, labradors, and rottweilers, isn't one easily passed on.

This is a 5E supplement.

Who is it by? Chamomile

Where can I find it? Ride gloriously into battle

All Must Bow - Sundered Sundries

An aggregation of abominable additions for the ALL MUST BOW roleplaying setting. 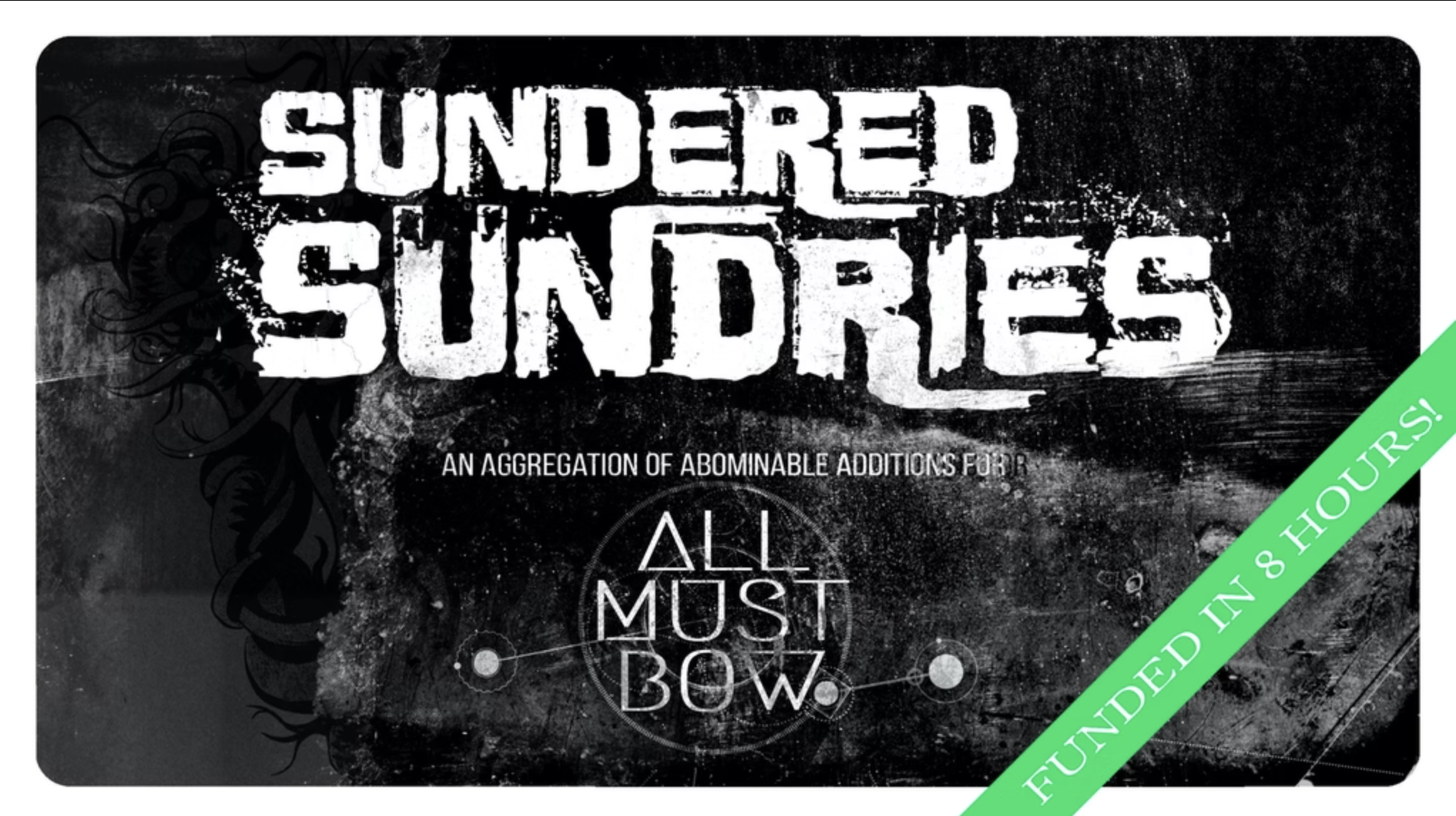 If you picked up All Must Bow during ZineQuest 3, this is your chance to pick up Sundered Sundries, it's follow up. Within, you'll find a new antagonist, ancient god monsters, profiles of unlucky species, and how best to run All Must Bow in even more RPG rulesets. But if you didn't, you may be delighted to know its a system agnostic cosmic horror setting, where you play the villain in a sci-fi / space opera setting that is starting to give way to entropy. You'll create a unique alien species, homeworld, character, and ancient unknowable god monster to which the character acts as scion and servitor. It's also available through this campaign, so you've no reason to miss out.

This is system agnostic.

Who is it by? Bleak Horizons Press

How much will a copy cost? £12 for digital copies, £15 for physical copies.

Where can I find it? Will you bow?

Fixers from the Floorboards: an RPG Zine 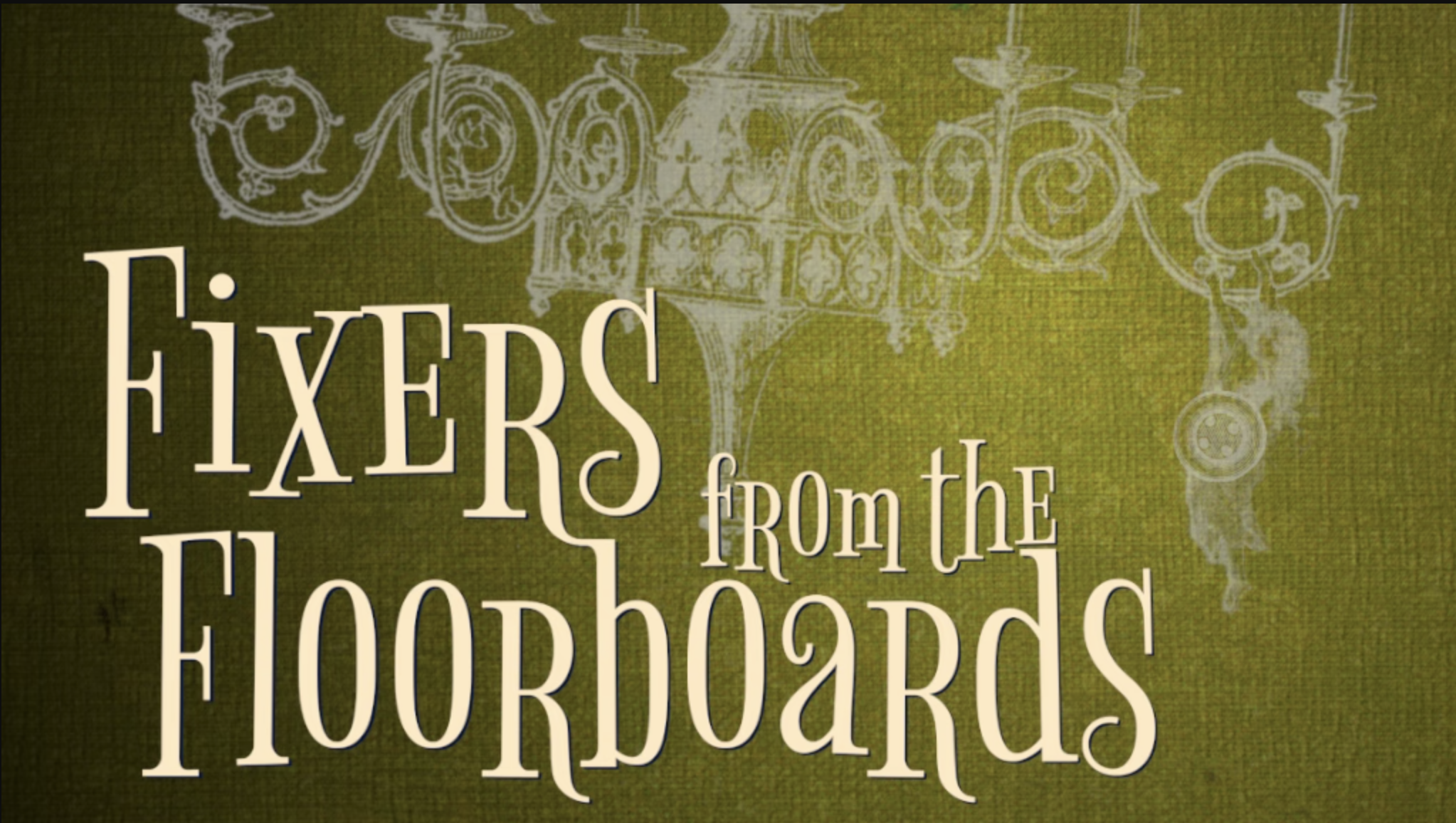 Who do you think of when you think tiny people? The shoe makers? The borrowers? Maybe it should be the Korrikin, who have lived unseen along humankind, helping with menial labour in exchange for things like bread, sugar or cream - but problems have gotten bigger, and it's not about just the shoes anymore! Now, special amongst the Korrikin are the fixers, who must help keep the clan secret, chase off predators, and solve problems for the big folk, which includes everything from a broken romance to a burglar.

This uses a skill path and D6 bonus dice system.

Who is it by? Robert Turk

How much will a copy cost? £8 for a digital copy, £13 to include a physical version.

Where can I find it? Live your biggest life

A TTRPG zine where you play as dogs with jobs launching for Zine Quest 4. 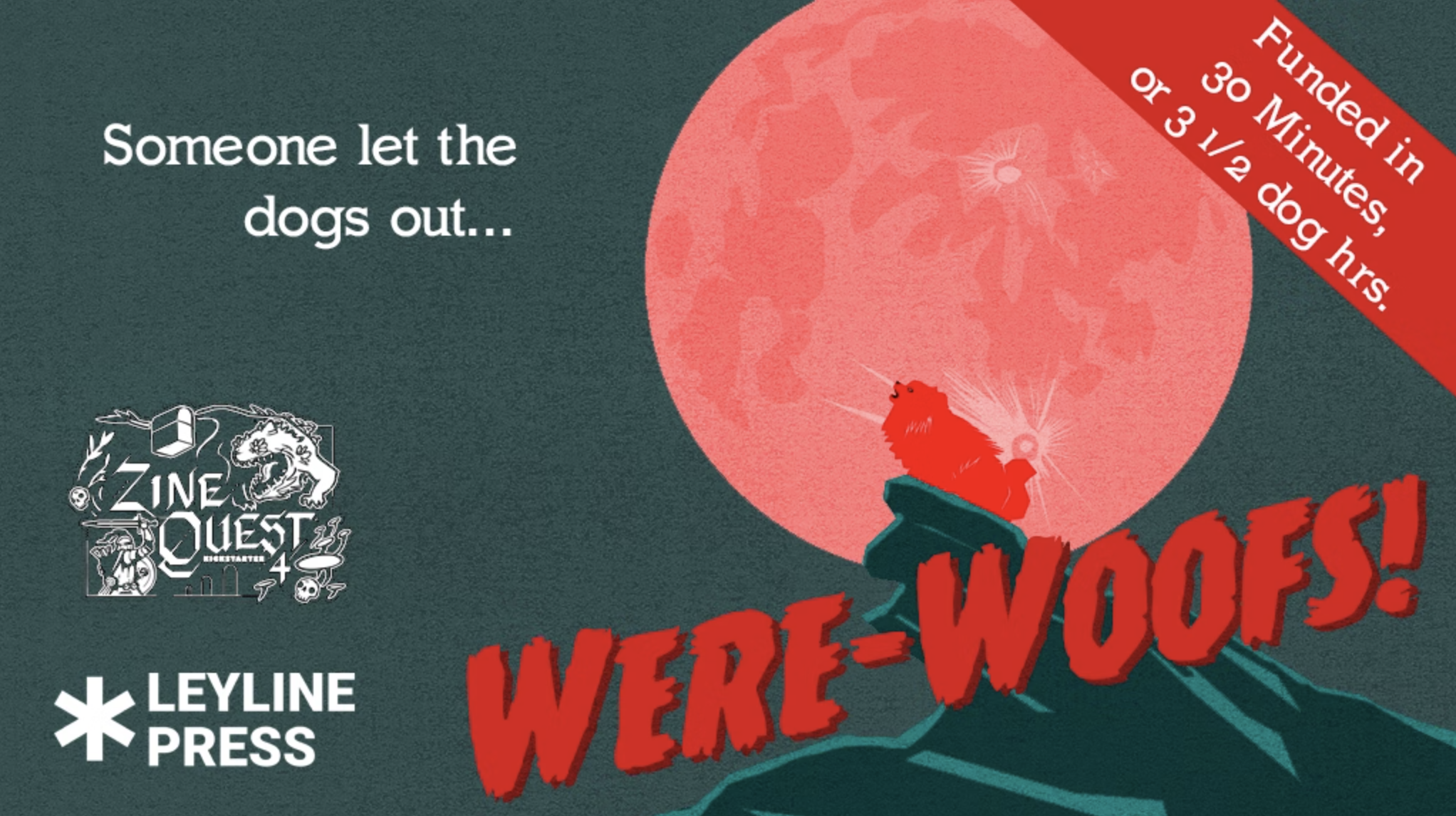 Who let the dog out? You may never know, but you woke up one morning and just so happened to be a dog now. With a choice of 12 breeds to choose from, and 12 jobs to pick between, you could find your true calling as the Afghan Hound Chef. You'll get a full adventure in The Labyrinth, where you'll investigate Goalden Laboratories, where rumour has it, is the source of what's going on, and then from the Mew-Tants! Adventure comes The Catnapping - allowing you to make a mixed party of mew-tants  and were-woofs.

[Mew-tants being a cat based Zine offered by Leyline Press!]

Who is it by? Leyline Press

How much will a copy cost? £6 for a digital copy, £10 to include a physical version.

Where can I find it? You'd be barking mad to miss

The follow-up to Introduction to Demonology! Add some fortune-telling flavour to your tabletop adventures! 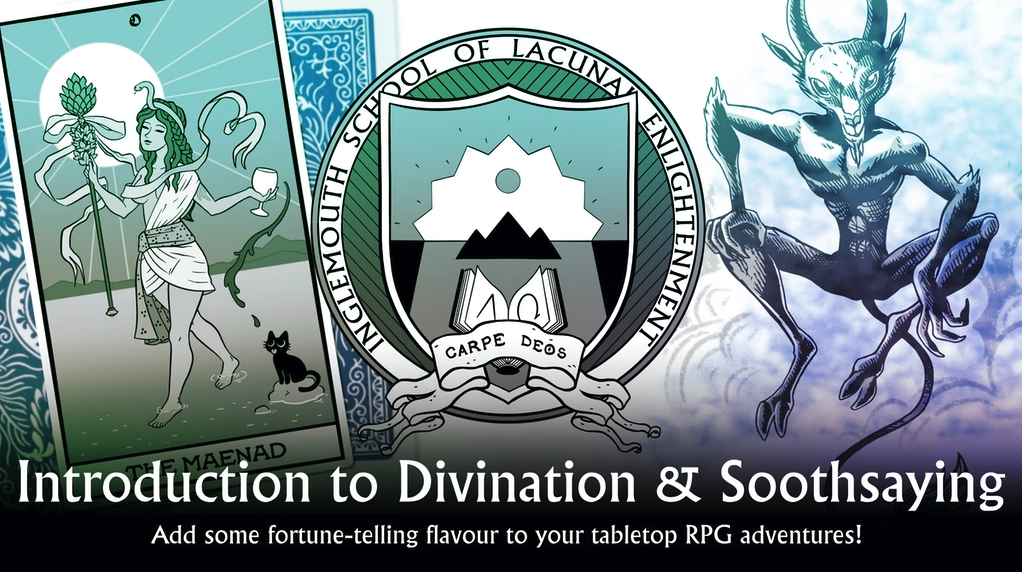 A 30 page schoolbook from another dimension, full of mystical secrets and otherworldly omens, this solo creative writing RPG school book will see you reading your friends palms, deciphering patterns in tea leaves, and unlocking the mysteries of the cosmos through the eyes of an animal familiar. Delightfully, the process describes having "researched divination extensively, and then I threw all of my research out the window and wrote some fun nonsense".

Who is it by? Boat of Bees

Where can I find it? Which bird can foretell the exact level of regret you'll feel in the morning? 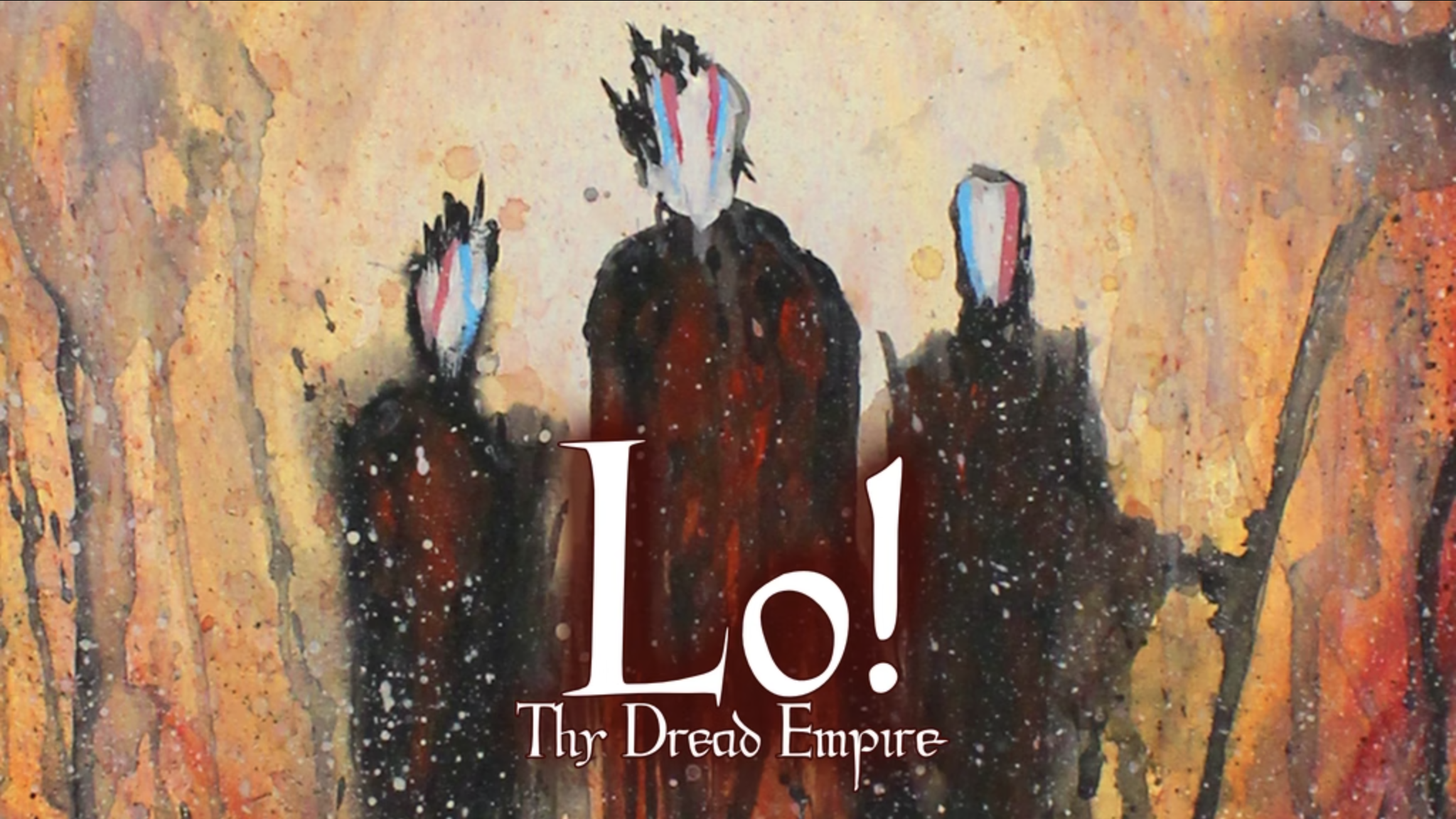 For something a little different, how about a Wargame / Tactical RPG? You're going to be fighting The Skeleton War against The Death Cult of Capitalism, using wargaming aesthetics such as that from grimdark, and fusing them with modern TTRPGs, putting you in command of nail biting battles where the rules and narrative work together.

Miniatures and GM are optional, and a bare bones version is available on itch.io to check out!

Who is it by? Tanya Floaker

How much will a copy cost? £10 for a digital copy, £15 to include a physical version.

Where can I find it? Thy Dread Empire Awaits

The Taming of the Slugiraffe 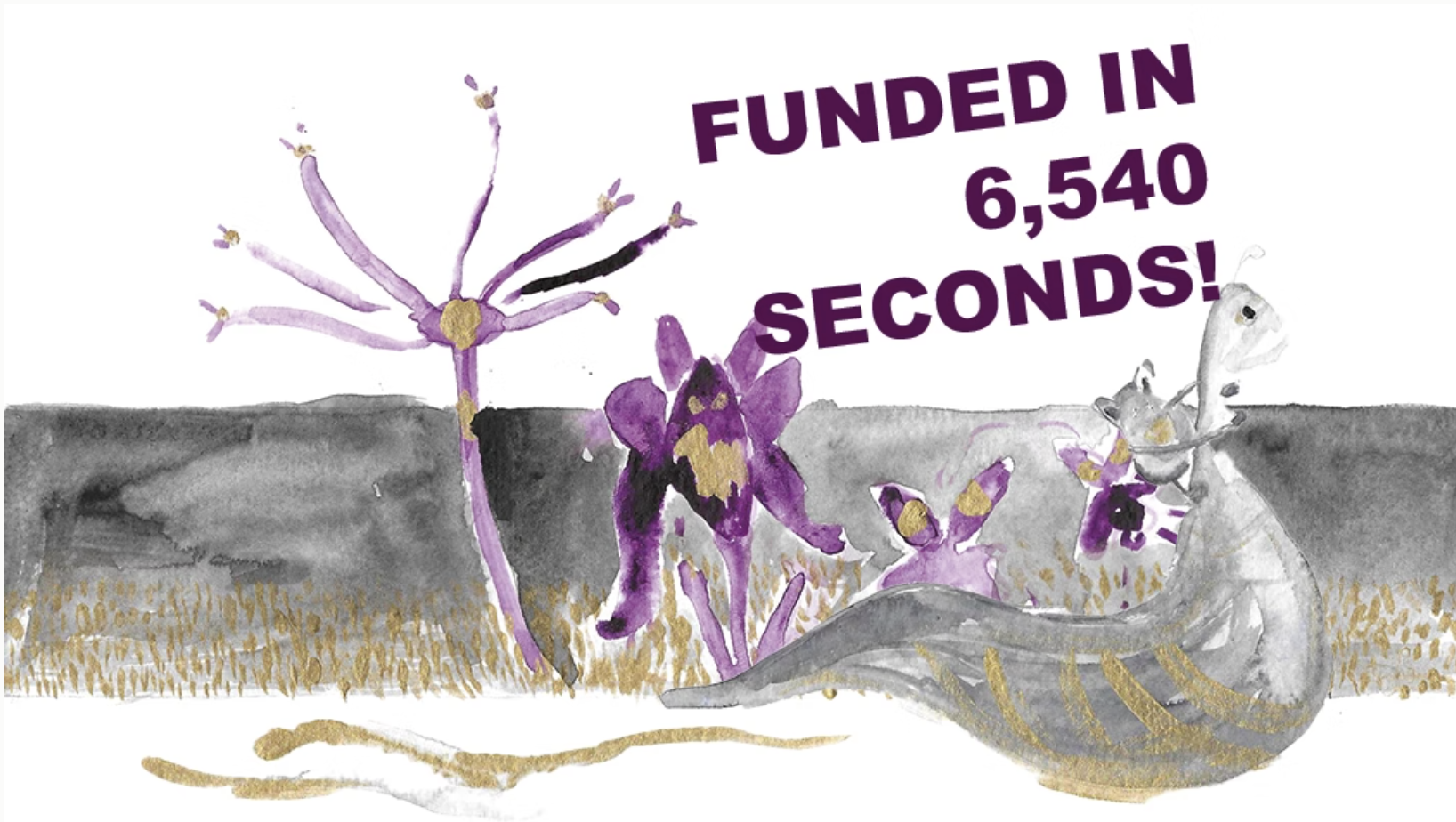 It would be remiss of us not to include our own editor of Tabletop Gaming Magazine, Chris Eggett's contribution to ZineQuest this year, in The Taming of the Slugiraffe. A solo roleplaying adventure, seeking the fabled Slugiraffe to return your people to a bountiful age, you'll play as insignificant background fantasy creatures. He's described it as "a bit like Dark Souls if you were playing as Pikachu trying to catch a Snorlax"

Who is it by? AdaPress

How much will a copy cost? £6 for a digital copy, £11 to include a physical version.

Where can I find it? Play as a GIBLET. And if you die? Another GIBLET.