Tiles of the Arabian Nights is a storytelling adventure game for 2-5 players, created by Matthieu Podevin and Olivier Melison, illustrated by Amber Scharf and Joëlle Drans, and published by Holy Grail Games. 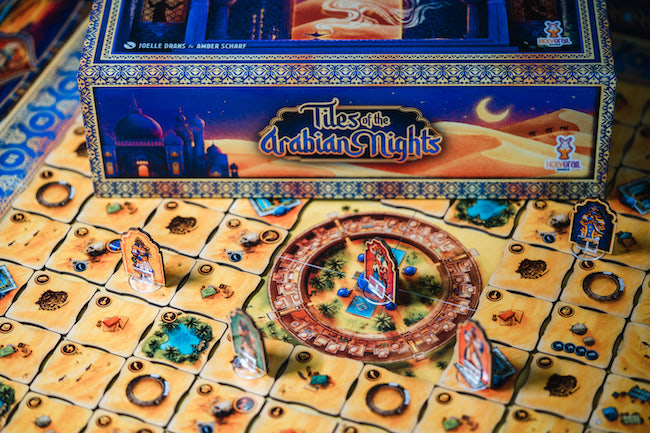 The game is set in the universe of the Arabian Nights. In Baghdad, storytelling has become deeply ingrained in the city’s culture ever since the legendary Scheherazade told 1001 tales over as many nights. In honor of the queen, the Sultan now holds a storytelling contest each year!

This year, as a citizen of Bagdad, you’re taking part in the contest, in the hopes of winning the title of Master Storyteller, and the fame and fortune that comes with it! But coming up with a good story isn’t easy, and as every tale contains at least a grain of truth, you find yourself in search of a little inspiration…

To find it, you’ll have to head out into the desert in search of adventure! As you explore, you’ll meet colorful characters, find amazing treasures and places, and defeat fearsome foes. These encounters could be the start of a truly epic tale, but exactly what your story will be is up to you… 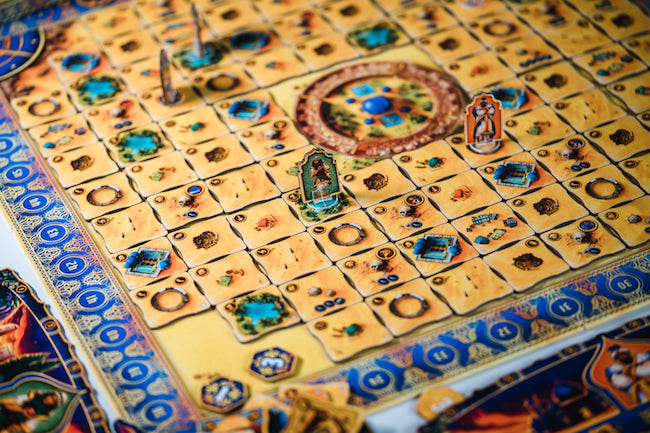 The base mechanics of Tiles of the Arabian Nights are very simple. You’ll start with a number of Story tiles, which are objectives showing the basic elements you’ll need for your story, such as a place, a character, or a monster. You then have to search the desert to collect Adventure tiles of those types! When you end your movement on a tile, you get to claim it for your Caravan. Once you’ve collected the Adventure tiles requested on one of your Story tiles, you can return to Baghdad to complete it by entering the Sultan’s storytelling contest.

When you reach the city, it’s time to tell your story! Tiles of the Arabian Nights features a storytelling mechanic, in which players have to improvise their own tales worthy of the Arabian Nights. To guide you, each Adventure tile has a unique illustration on the back, showing exactly what you found. Did the weapon you found turn out to be a legendary spear, a beautifully crafted bow, or a rusty, broken blade? Was the place you discovered a mysterious ship, a towering palace, or a peaceful oasis? 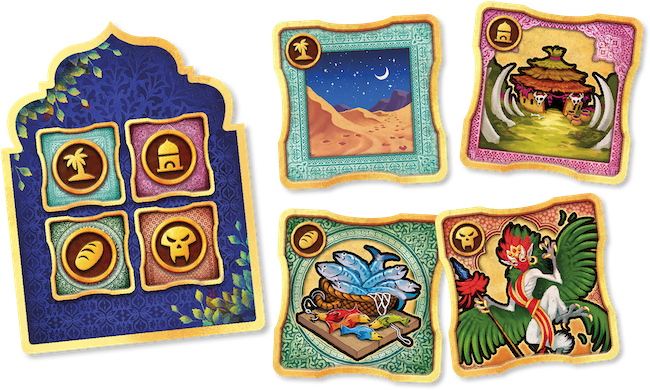 Using these illustrations as inspiration, you’ll have to tell your story to the players at the table, being as creative as you can. Each tale you tell will earn you Storytelling points from the Sultan himself as well as from other players, who get to award your story with a score of 1 to 5 depending on how good they thought it was!

The player with the highest Storytelling score wins additional Victory points at the end of the game, but there are also other ways to score points, such as selling Adventure tiles at Markets or defeating sets of monsters.

Tiles of the Arabian Nights is a unique, beautifully illustrated game for the whole family, combining simple set collection mechanics with creative narration. For younger and more inexperienced players, it can be a wonderful introduction to the fun of improvised storytelling. If you’re a roleplaying veteran, you’ll be able to flex your creative muscles in a whole new way.

Tiles of the Arabian Nights will be crowdfunding on Gamefound from September 23rd until October 14th. 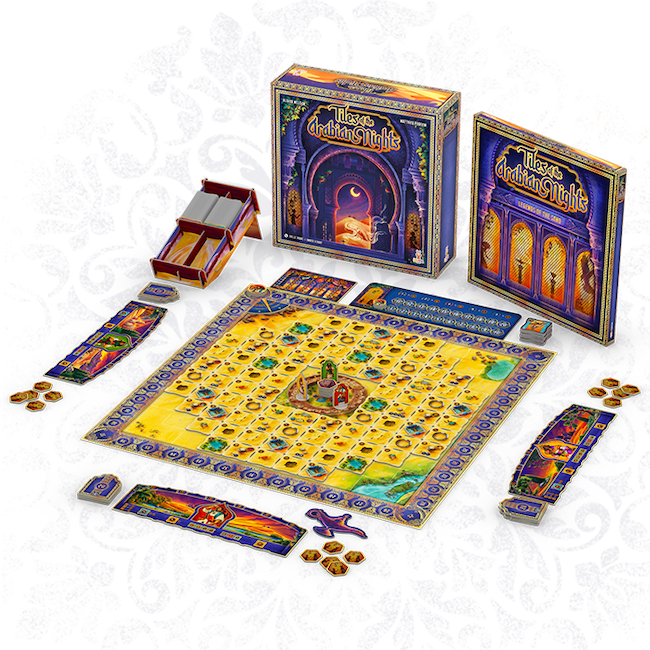 The core pledge is 39 euros, and includes a free expansion. There will also be an early bird pledge that comes with a free deluxe wooden token set! You can check out the campaign here.