We'll stick our NECK out on this one to say it looks cool...

Curse of Strahd for D&D isn't new, and in fact we featured it in the magazine a little while back. However, it's back in the limelight this week with a new collectors edition - Curse of Strahd: Revamped Premium Edition.

If you're unfamiliar with this particular adventure, Curse of Strahd sits firmly within the Gothic Horror genre, centred around the vampire Count Strahd von Zarovich at Castle Ravenloft. It's an expansion of Ravenloft, an original D&D campaign from 1980's, but with bigger maps, detailed characters, and now even more.

The collectors edition is newly announced, and included in the box are things like a new Tarokka Deck. In order to play this adventure, you'll need a deck of cards to represent the fortunes of Ravensloft, and so its creators have now provided an impressive version of these.

As expected, you'll also find included within it the Curse of Strahd Revamped (which details the adventure itself), plus a Monster Manual that is more specific to the Curse of Strahd, and finally a booklet on the Tarokka Deck, which are the aforementioned cards. This was done to add to user ease, as each of these may be open and prepared for an encounter, rather than the DM needing to flip through pages. 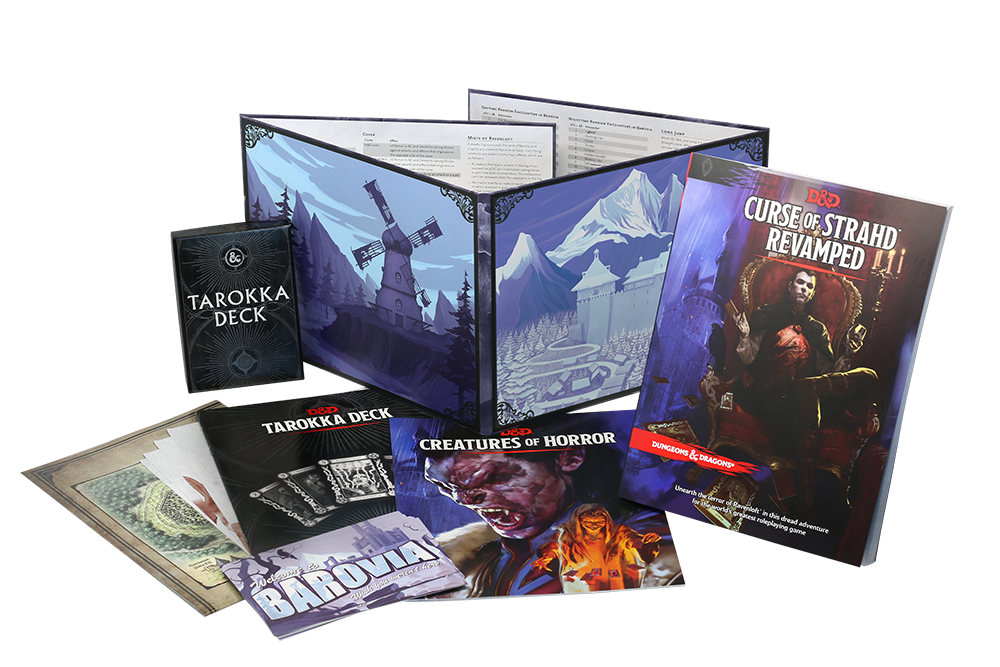 D&D has previously been under scrutiny for its handling of stereotypes and disability, and so committed to new versions of text including updated and corrected depictions, and this newer inclusivity has been included within Curse of Strahd Revamped.

Then, there are additional handouts, now separated from the adventure book, and able to be passed directly to players, plus numerous maps - from that of the castle itself, the grounds, the area of his influence - each beautifully illustrated.

Plus, the box includes postcards, which at first appear cosmetic collectables (though beautifully illustrated). However, fantastically, these are conceived to actually use rather than merely decorative, which work perfectly for inviting players, as this was considered a very Strahd type thing to do. The same artwork is then duplicated on the DM Screens.

If all of this wasn't enough, the box itself has been conceived in the shape of a coffin, making it perfectly gothic.

This will release October 20th 2020 (You'll notice its proximity to Halloween!), and you can pick it up either on Amazon or your FLGS