Zero Dark On the Horizon: An Introduction to Horizon Wars – Part One Horizon Wars: Zero Dark is a sci-fi skirmish game published by a relatively new one-man games company, Precinct Omega Publishing. The game gives players the tools to fight covert missions with a handful of elite specialists. What makes Horizon Wars: Zero Dark unusual is that it’s been written to use the same core rules to play conventional player-versus-player games, and also to play solo or co-operative games. In PvP, players must contend with an unpredictable third party – the Red Force – that also acts as the main antagonist in solo and co-op play. You don’t have to play PvP with a Red Force, of course, but it makes the whole thing far more interesting if you do.

In this Miniature Wargames exclusive, POP shares enough of the rules for you to take them for a spin in a solo or co-op battle. This month, we’ve got the basic rules for play, if you just want to get to grips with the core mechanics of the game. Next month, author Robey Jenkins will share the rules for the enemy “Red Force” and a set of pre-designed heroes, along with the details of a mission you have to help them complete.

WHAT YOU’LL NEED TO PLAY

To play, you’ll need: 6+ twelve-sided dice (d12s); a normal, 54-card deck of playing cards including two Jokers; Miniatures or counters to represent your heroes and the bogeys of the Red Force; some counters or chits to indicate certain states in which heroes or bogeys may find themselves; and – finally – a roughly square space of up to 4’x4’ on which to play, with whatever terrain inspires you 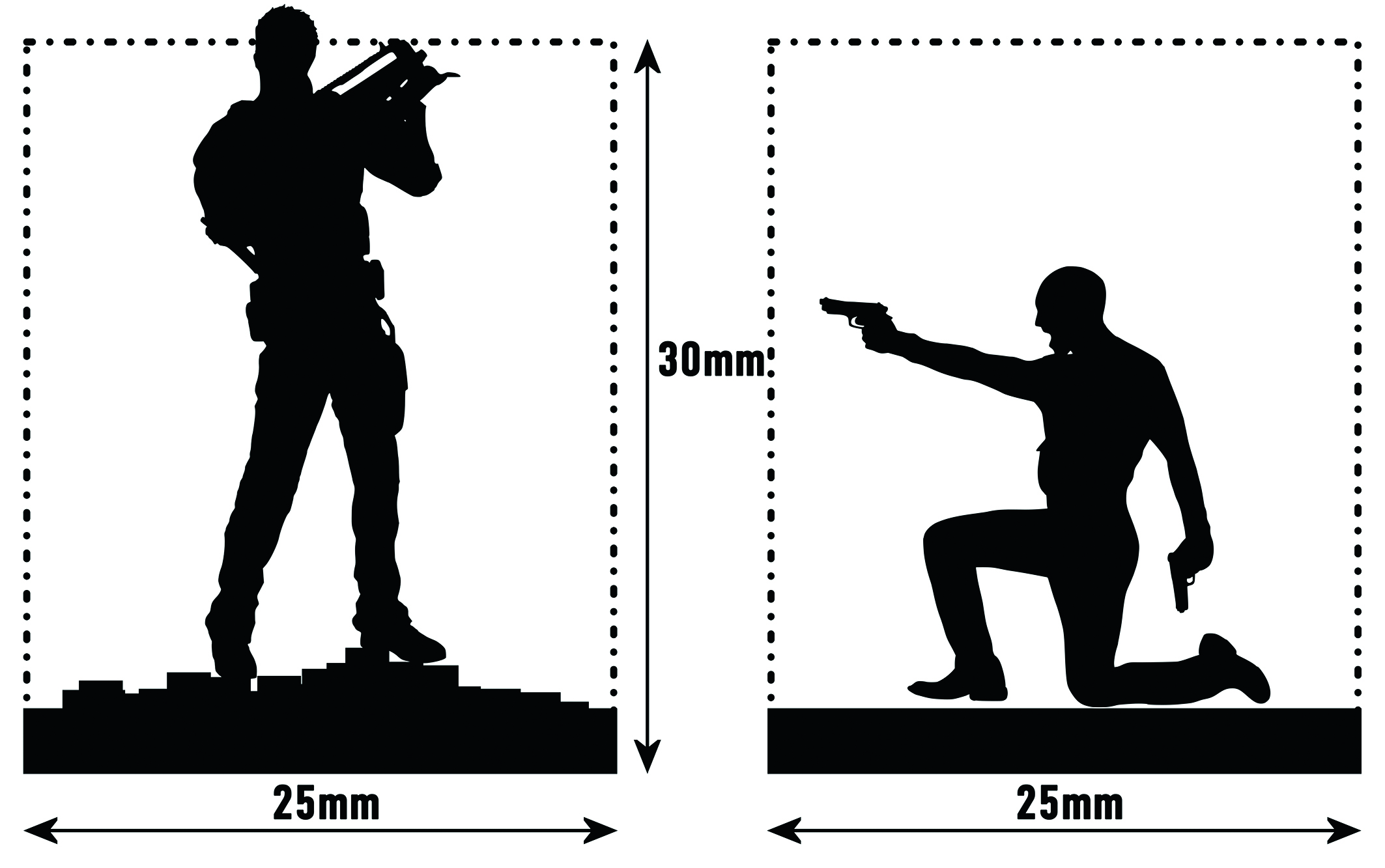 The default unit of measurement is the inch (“) if you plan with 28-32mm miniatures, but if you want to play with 15-18mm miniature, treat references to inches as centimetres. A part of a unit is considered to be a whole unit, so if a target is 7¼” away, it counts as being 8” away. Distance is how far a model moves and is measured from the centre of a model’s cylinder. Range is how far a model shoots and is measured from the edge of the base closest to the target.

Many events will require you to flip a card from the Control Deck – a normal, 54-card deck of playing cards, including two Jokers. When a card is flipped, simply take the face-down card at the top of the deck, turn it over and place it on the top of the face-up cards in the discard pile.

A few rules in Zero Dark allow players to “re-roll” one or more d12s. This is exactly what it sounds like: you pick up a d12 and roll it again. But it is important that any one d12 can be re-rolled only once, regardless of how many rules apply that would offer a re-roll.

The basic component of a battle in Zero Dark is the activation. In one activation, a character will perform an action, including any bonus actions, then there will be a Control Deck flip.

A character can perform any of the following actions when active:

Note that there is nothing to stop you from activating the same character multiple times in a row.

Some actions are described as “automatic”. This means that they simply happen – no test is required or permitted and no bonus actions can be generated.

All characters have a set of statistics or “stats” that define their basic capabilities. The stats are Mobility (M), Fight (F), Acuity (A) and Discipline (D) and are described in more detail later. They all have a value between 2 and 6.

Some actions require the character to pass a test. Tests are always made using a nominated stat and the method of the test is to roll a number of d12s equal to the stat (or a modified version of the stat if the test is particularly challenging).

Lucky 12s – Normal Tests: Every 12 rolled in a normal test, in addition to contributing to groups as normal, confers an additional success. 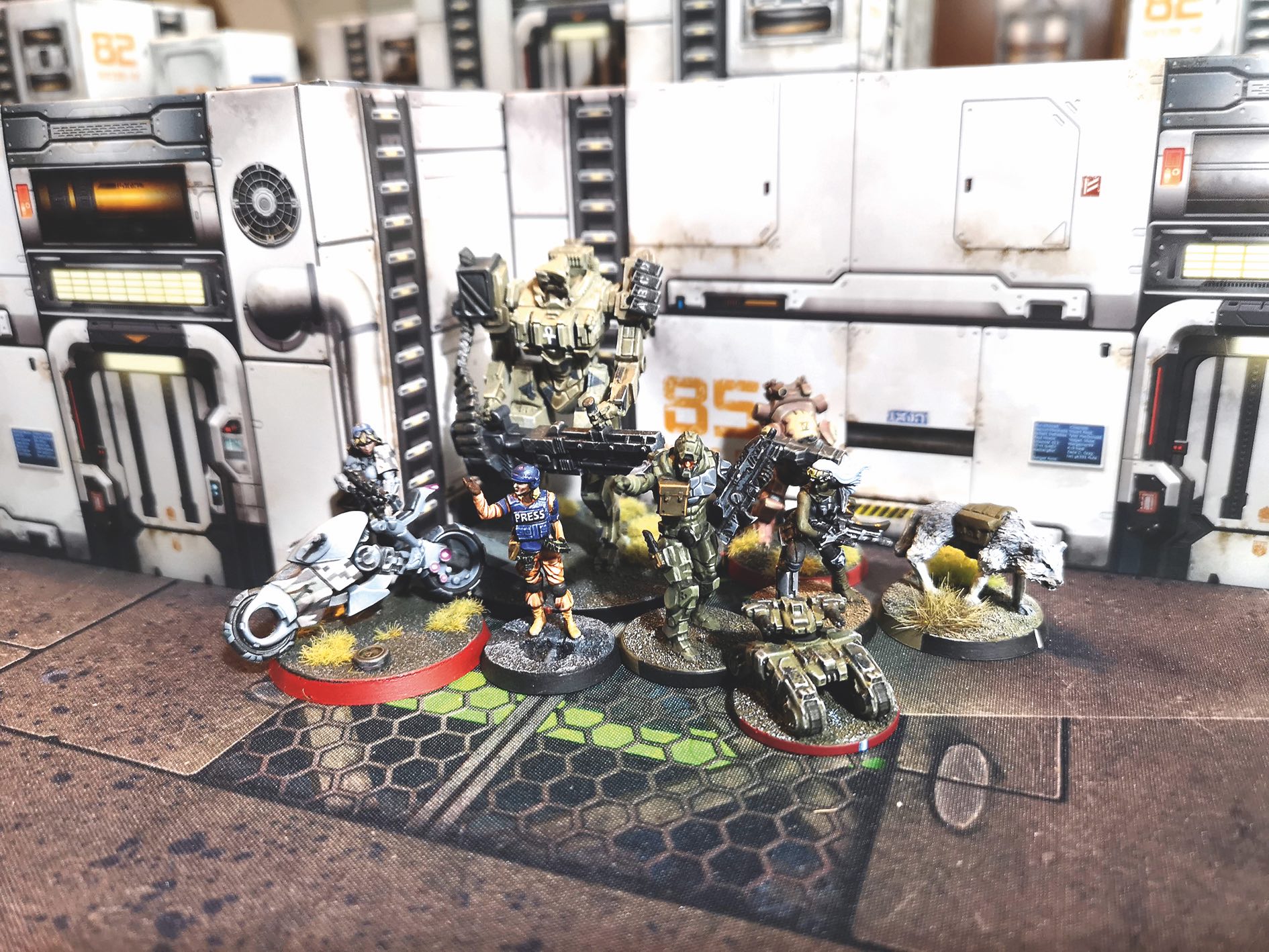 Lucky 12s – Counter-tests: A natural 12 on a counter-test will always counter one whole success or count as a successful match if the target is a single value.

All movement is measured based on the centre point of the model’s ‘cylinder’.

There are three basic movement actions in Zero Dark: 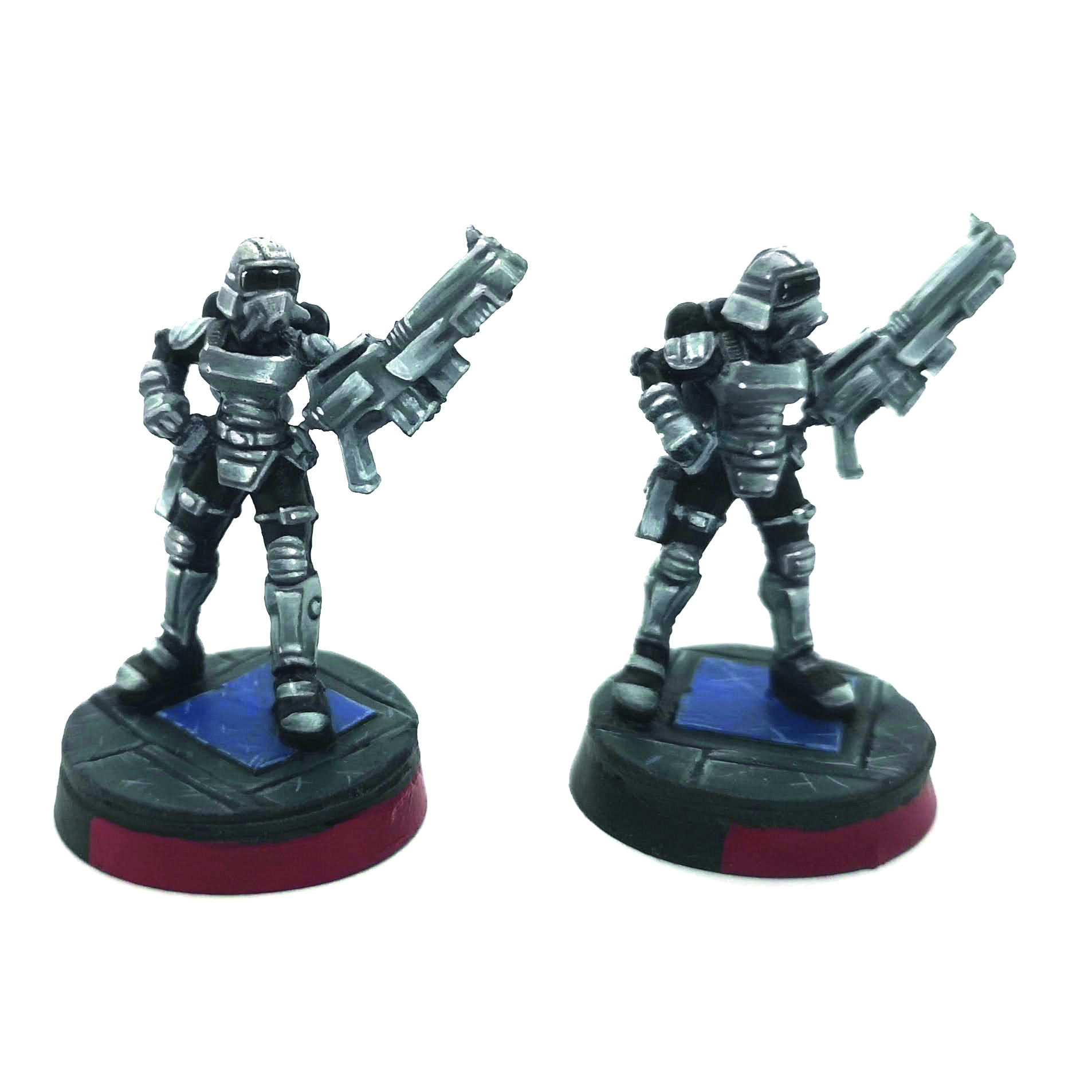 Whilst most movement in a game will usually be conventional, normal movement, characters may want to climb walls, leap gaps or drag allies to safety, or – if they’re unlucky – have to tumble from a height.

Jump - Jumping may be up, down or across.

The character shoots at a target. Most shooting is of the straightforward kind that involves pointing a weapon at visible enemies and releasing a shot in a more-or-less straight line that either hits them or doesn’t. 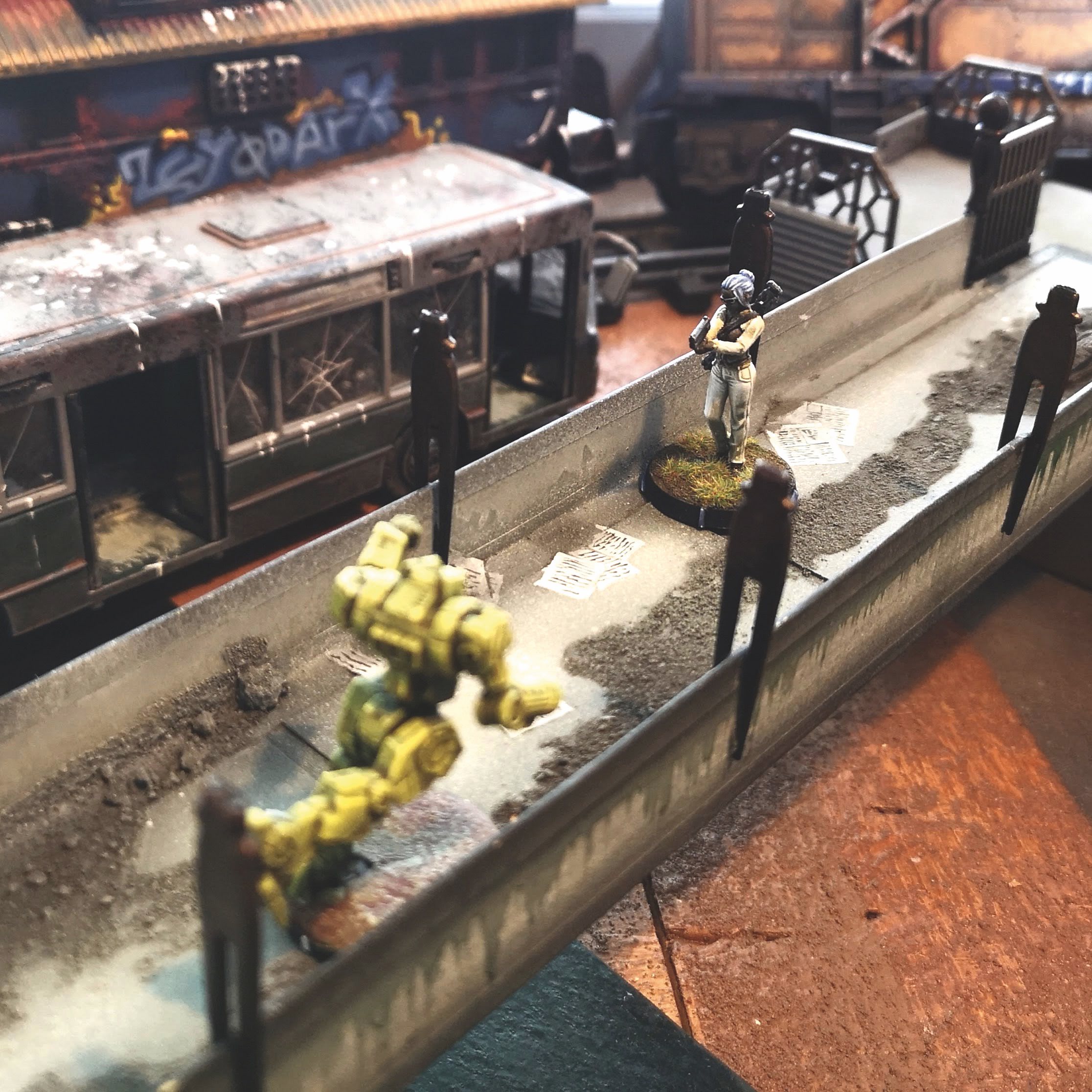 To make a basic shooting action, a player makes an F+n(v) test where v is the range to the target, modified by any levels of obscured (see States, next page) the target might have and the mission’s visibility level. Variables (n) for the test are as follows:

The target of shooting may make a cAV(r) test against the shooting test.

If a target is put into the out of action (OOA) state or (for bogeys) into the dead state by shooting, any surplus successes in the F±n(v) test may be spent on Bonus Actions (below).

All missions have a visibility level between 0 and 6, with 0 being daylight and 6 being deep darkness, which acts as a modifier on ranges as described above. 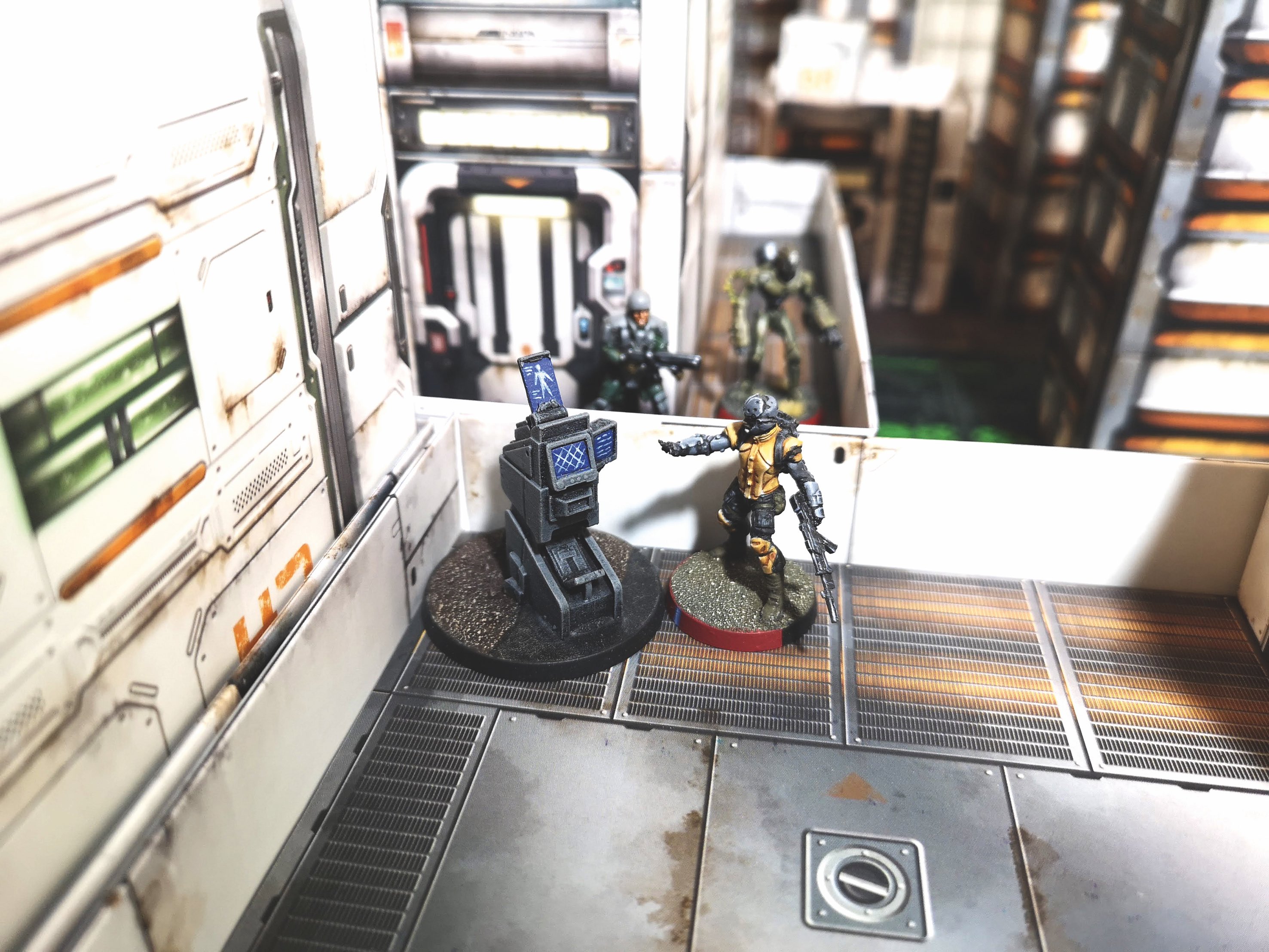 When characters take tests to perform an action, if they achieve more than the minimum number of successes, they will often generate one or more bonus actions that may be performed by any hero (not ally) in the same team. So if an ally performs an action that generates bonus actions, these may only be used by heroes in the team and not by allies – not even by the ally whose action generated the bonus actions. These must be one of the following:

Bonus actions must all be declared at once, but are resolved in the order in which they are performed. So, for example, a support token may be gained with one bonus action and then used to shoot a target with the next bonus action. Bonus actions can even interrupt the actions of bogeys or enemy characters – for example, if generated by a stress test following being shot at.

Characters can adopt or acquire a variety of states in the course of the game as a result of weapons, tabletop effects, complications or special actions. When a character acquires a new state, loses a state or has a state change in value, this is called “changing state”. States are applied to the character or bogey at the end of the action, bonus action or Control Deck flip in which it was caused. The various states are as follows: 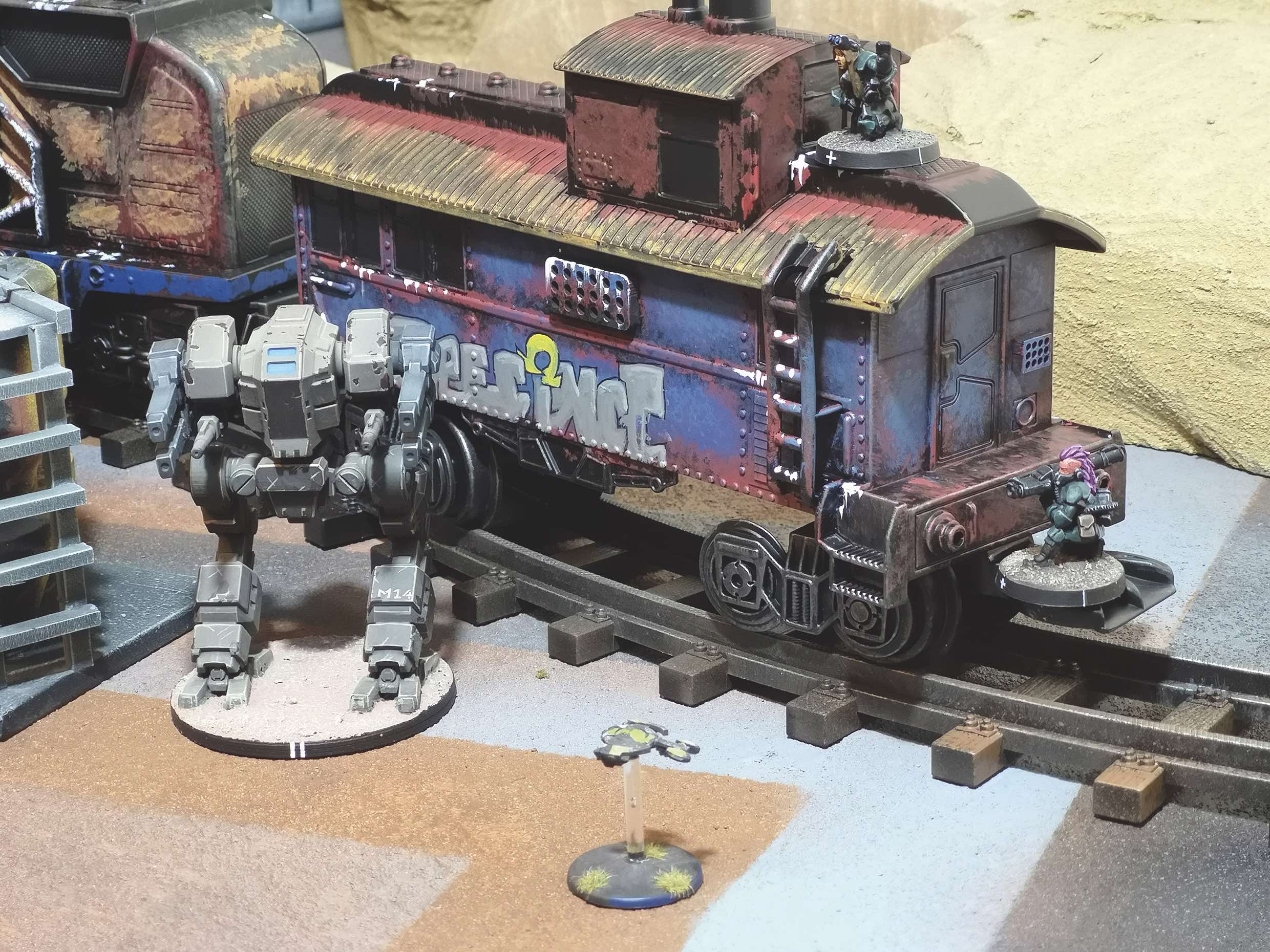 Armour is acquired by characters as part of the upgrading process, but all characters begin with light armour (AV 1) as standard. For more options for armour, see the full rule set! Armour has two direct effects:

It increases the target number needed to shoot a target by an amount equal to the AV. This is in addition to any increases caused by the obscured state.

It also provides targets that are hit with the opportunity to make an armour test to avoid or reduce damage. Armour provides a cAV(r) test.

For details of how cover and the obscured state affects shooting, see the entry for “obscured” in the States section earlier.

A character that fails a stress test immediately makes a bonus cautious move towards the closest means of becoming obscured. This move may not take the character closer to the source of the action that caused the test (such as a shooting character) unless it will immediately cause the stressed character to become obscured. If the character is not obscured at the end of the bonus cautious move, or the character didn’t move (for example, because of already being obscured), the character becomes prone. If a character fails a stress test when already stressed, the results will stack. So a character who is Stressed(1) and suffers a further fright becomes Stressed(2) up to a maximum of Stressed(4). A stressed character may only perform recover actions, as described above. 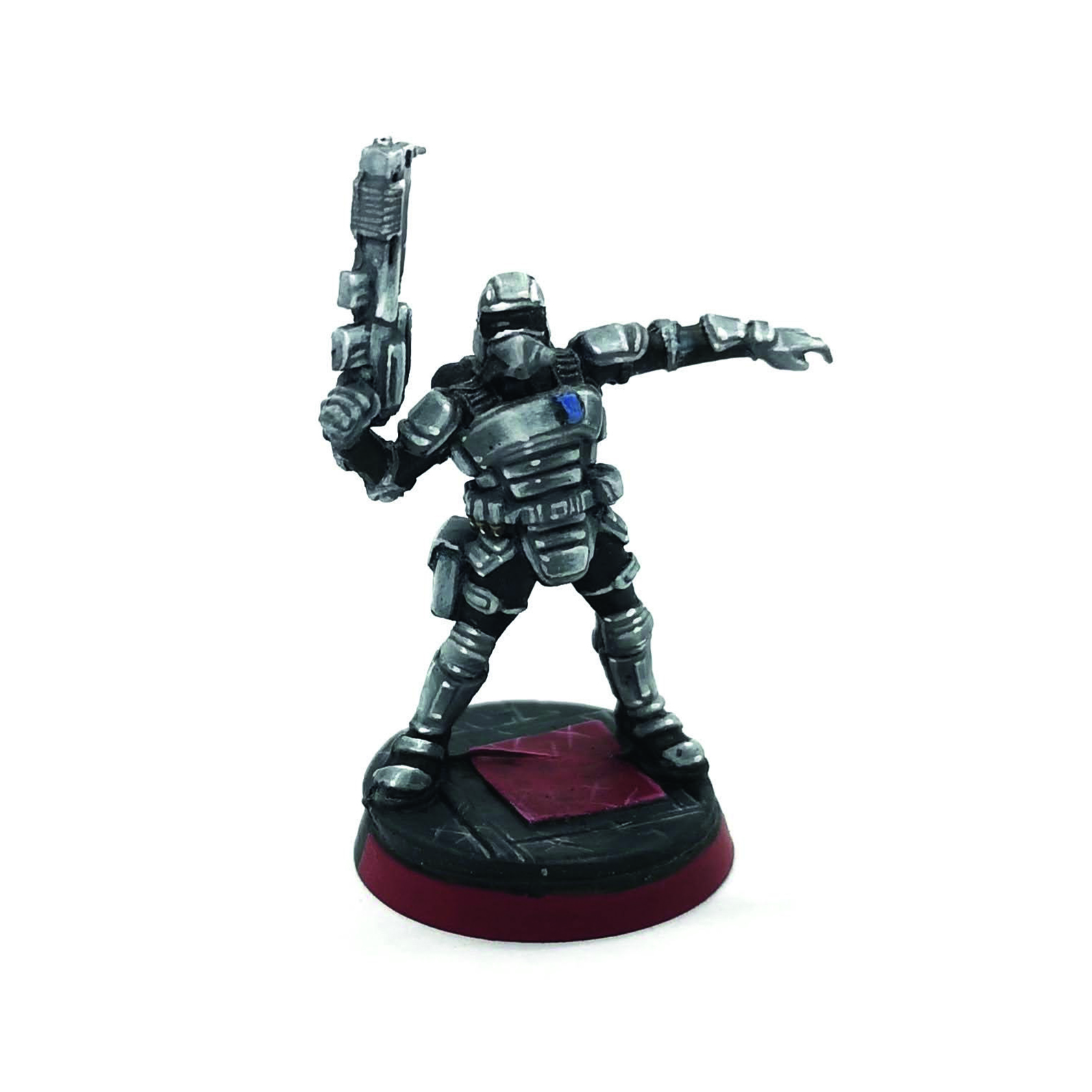 A number of events in the course of a game of Zero Dark allow characters and/or bogeys to obtain Support Tokens. For bogeys, support tokens are acquired by AI deck events. For characters, the most common way to get a support token is from an EWOp. Support tokens are an abstract way of illustrating all those interesting things that can happen during an intense mission that arise from chance or design: the discovery of a perfect firing position or the presence of just the right sort of shadow; the comforting words of a comrade or a burst of particularly useful data from the Battlenet; the niggling sense of danger, or the hyper-awareness that builds off an adrenaline rush.

All of these are rolled up, simply, into the presence of one or more support tokens. 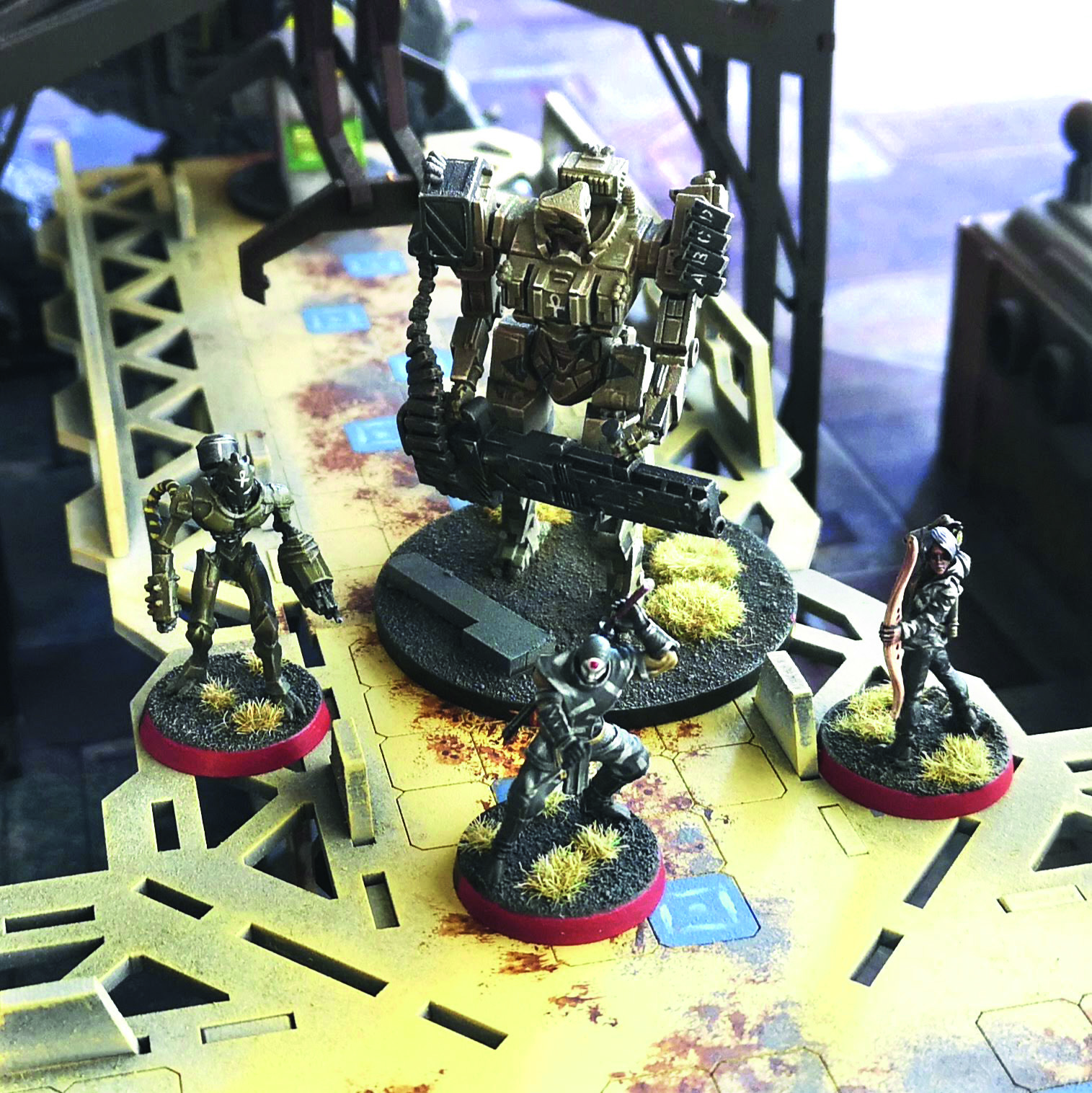 Each hero is typically represented by a single model that should show a fair representation of the character’s size and equipment. Heroes have “stats” – core qualities that describe their broad competence in basic skills such as moving and fighting, represented in the game by a number between 2 (the minimum value) and 6 (the maximum value). As mentioned earlier, the four basic stats of a character are:

In addition to the four basic stats, characters have secondary stats, the details of which are generated differently. The secondary stat relevant to Training Run is:

Note that the pose of the particular miniature makes no difference to the size or shape of its cylinder. Our miniatures can’t leap around, gesticulate or hug cover the way real soldiers can, so don’t assume you can see a target just because you can see a rifle barrel or radio antenna. Similarly, don’t assume you can’t see one, just because the miniature is concealed by terrain. Some miniatures will have larger or smaller cylinders depending upon the nature of the character, bogey or device in question. If two cylinders are touching at any point, then they are said to be engaged.

For the purposes of a battle played in the 28mm scale, a cylinder is 30mm tall, so an obstacle that is also 30mm tall will entirely obscure a cylinder from another 30mm cylinder on the same level. However, in the heat of battle, a millimetre can be a tricky measurement to easily establish. Arguing about whether an obstacle is 30mm or 29mm high, or whether a fractional change in elevation, such as a pavement or the base of some trees, should make an obscured character visible is very much not part of what Zero Dark is supposed to be about. If you find yourself in this position, the assumption should be for generosity towards the target who is, after all, usually making a concerted effort to not get shot.

Field of View & Line of Sight 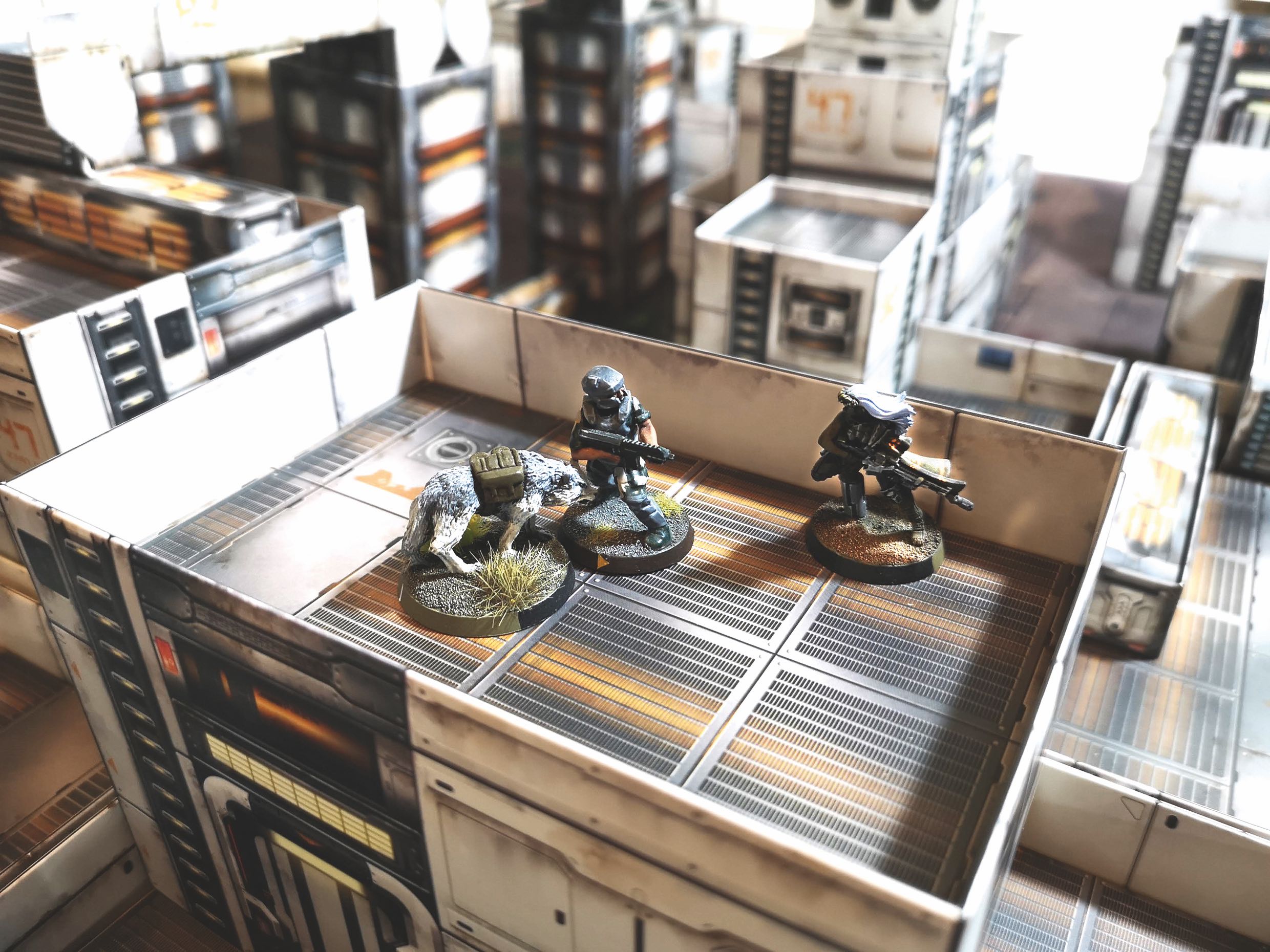 So – you’ve got the basic rules: if you liked the sound of what you’ve read here, you can get the full rules, including rules to build heroes from scratch and campaign rules, from Wargame Vault or via precinctomega.co.uk. Next month it’s a scenario: The Gauntlet!

You can find part two by clicking here.

This article originally appeared in issue 456 of Miniature Wargames. You can pick up your issue of the magazine here or subscribe to make sure you never miss another issue.