Ten of the Best: Word games (That aren't Scrabble) Got a love of letters? Let these fantastic titles cast a 'spell' on you

Aren’t words great? After all, without them you wouldn’t be able to read this very website.

It turns out that words are also pretty fab when it comes to games, with loads of tabletop designers opting to make the mastery of language and enjoyment of spelling, puns, wordplay, storytelling and other linguistic hijinks part of the fun.

Of course, you can’t mention word games without someone bringing up Scrabble, but we’ve deliberately avoided including the family favourite in this list for obvious reasons; first off, everyone already knows about it and, secondly, there are so many lesser-known games out there that deserve your love just as much.

We’ve gone for games that ask you to create your words from letters, some that involve using your knowledge of words to score points and others that treat letters and words as something else. Though they may be quite different when it comes to words, they all have something in common: they’re all loads of fun.

Oh, and they’re not Scrabble. 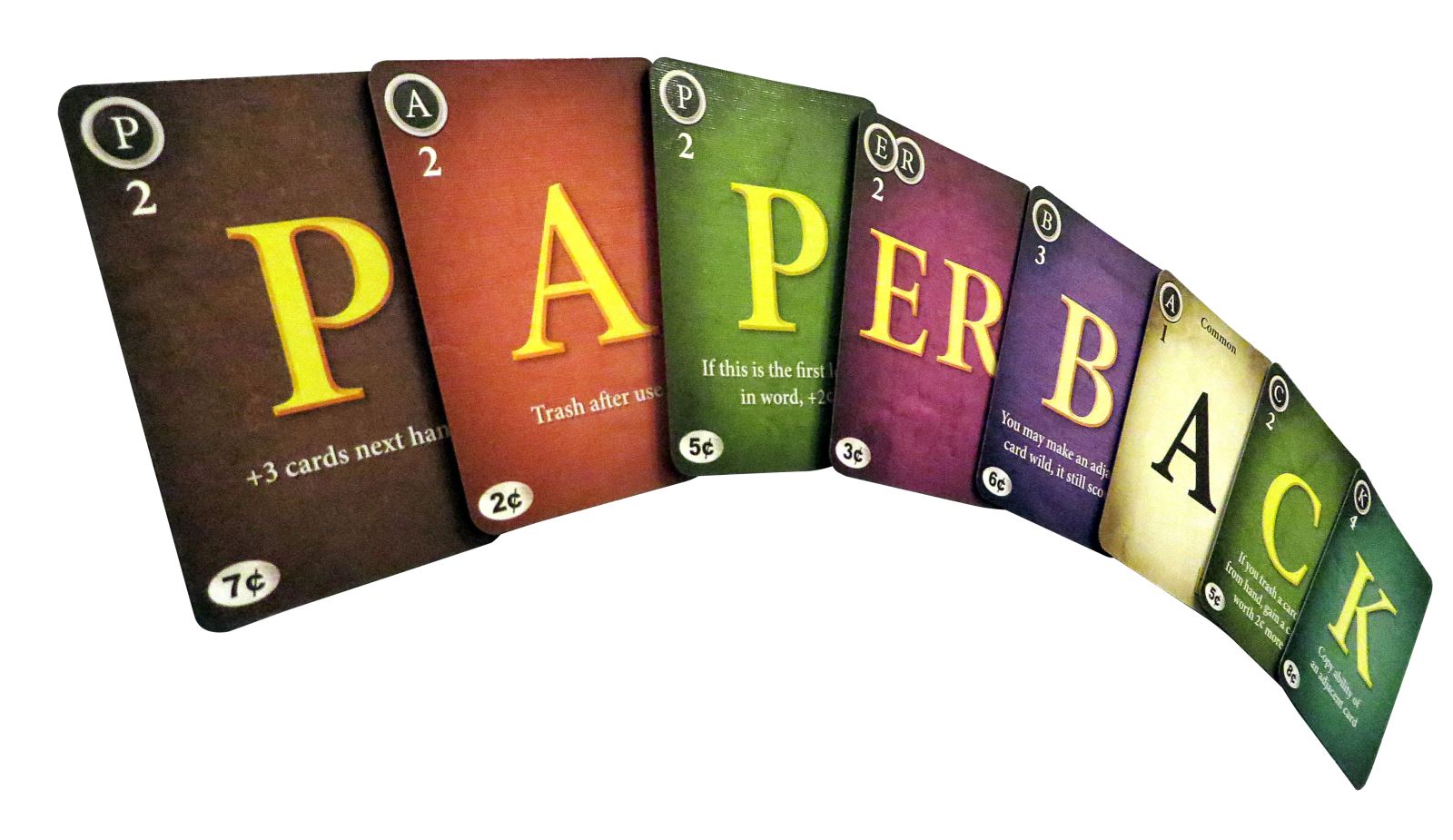 In Paperback players are elevated to the status of writers finishing their hit novels word by painful word. Forming words using your hand of cards earns cash to buy and add better letters to your deck, increasing your selection until you can spell words long or complex enough to afford the pricey wild cards, which also grant victory points. Some of the cards also grant special skills to bump up your income as you race to out-spell your opponents in a fantastic mash-up of deckbuilding and word-making. Or why not play the co-op variant and work together? 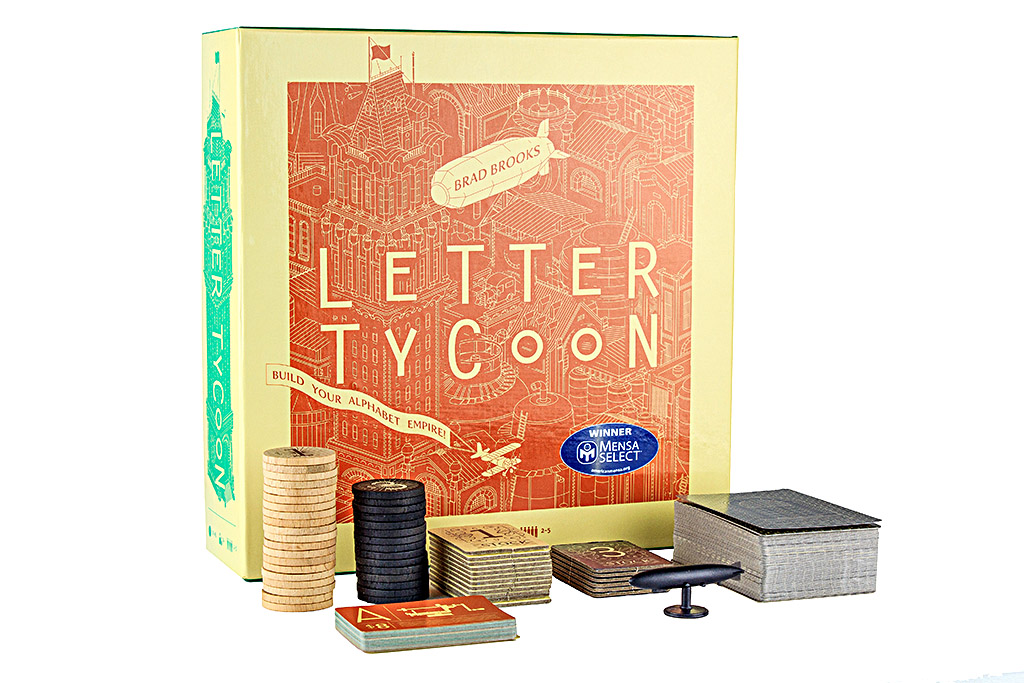 A slightly different spin on the ‘letters as money’ format, Letter Tycoon sees players spelling words using a mixture of their personal letters and shared cards to build up their cash before ‘patenting’ a letter – meaning they earn extra dosh when other players use the letters they own on future turns. Some of the letters also grant unique abilities, raking in even more moolah. It’s wickedly fun thanks to the interaction between players and features absolutely beautiful artwork, making it a choice pick for fans looking to convince their friends that spelling can be fun. Honest. 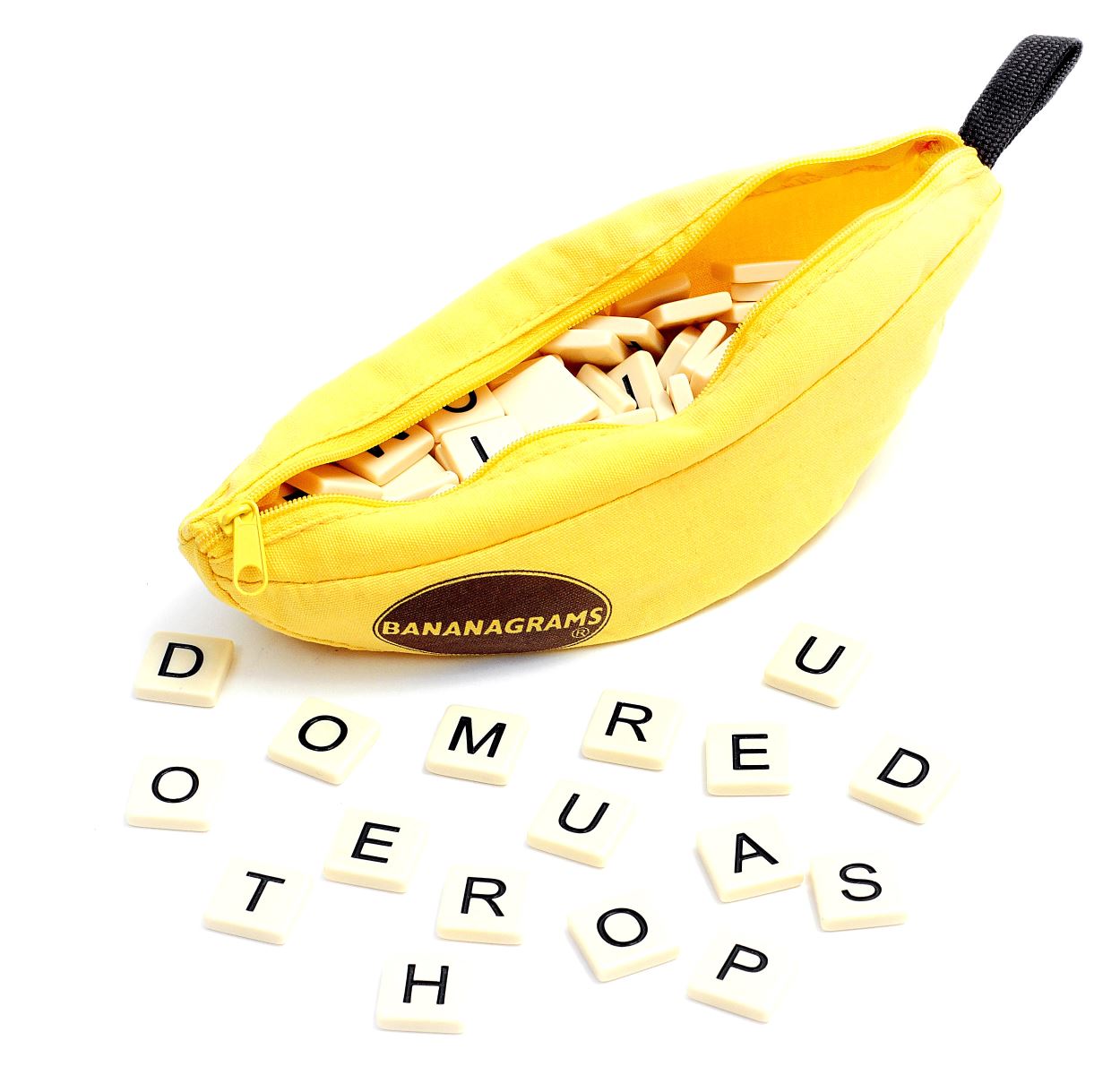 Often called ‘Scrabble without a board’, Bananagrams boils down the letter-placing classic to its spelling core by getting rid of the bonus squares. Players start with a handful of letter tiles and create their own personal lattice of connected words, rather than sharing a grid. When one player has used up all their letters, everyone grabs a new tile – this happens until there are none left and the quickest speller is declared the winner. Because everyone spells at once and the only objective is to use letters rather than making really long words, it’s a lot easier and faster to play than Scrabble. Plus, it comes in a banana-shaped bag! 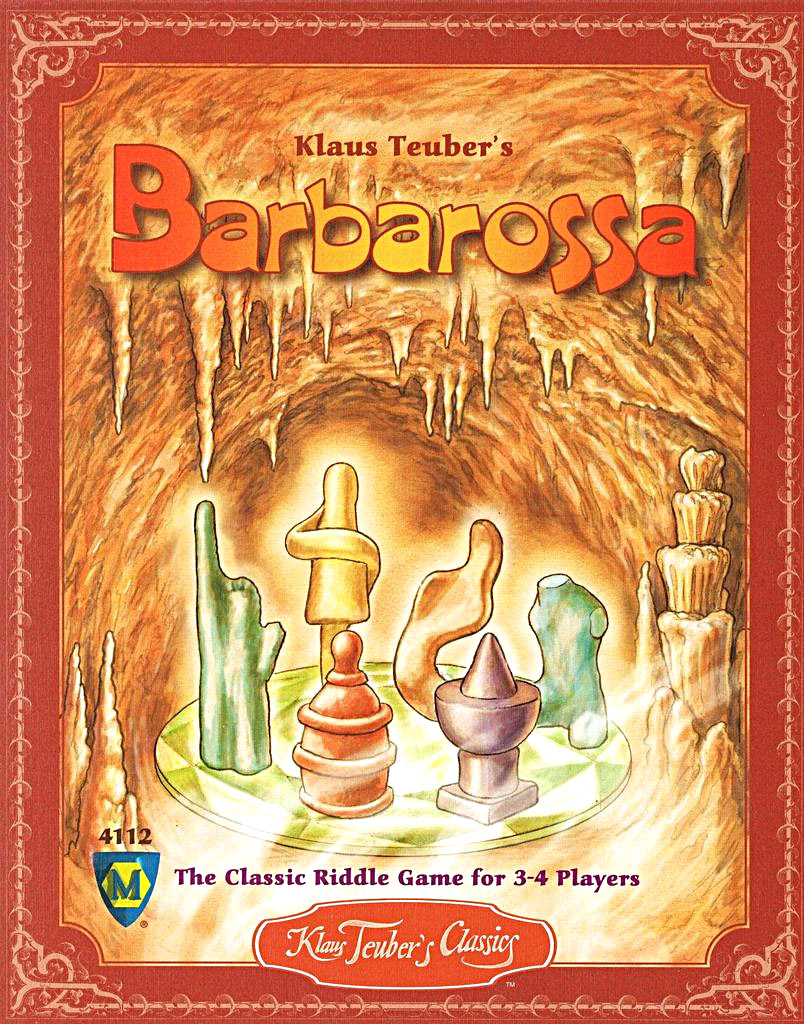 An earlier game by Catan creator Klaus Teuber, this Spiel des Jahres winner is a fun mix of clue-guessing and model-sculpting, as players try to identify what their friends have made out of clay, often letter by letter or by asking simple yes/no questions as they progress around a game board by rolling a die or spending gems. Players score points based on how quickly they guess the object, which must be a simple word, but the modeller can lose points if they make the answer too easy or hard to work out. 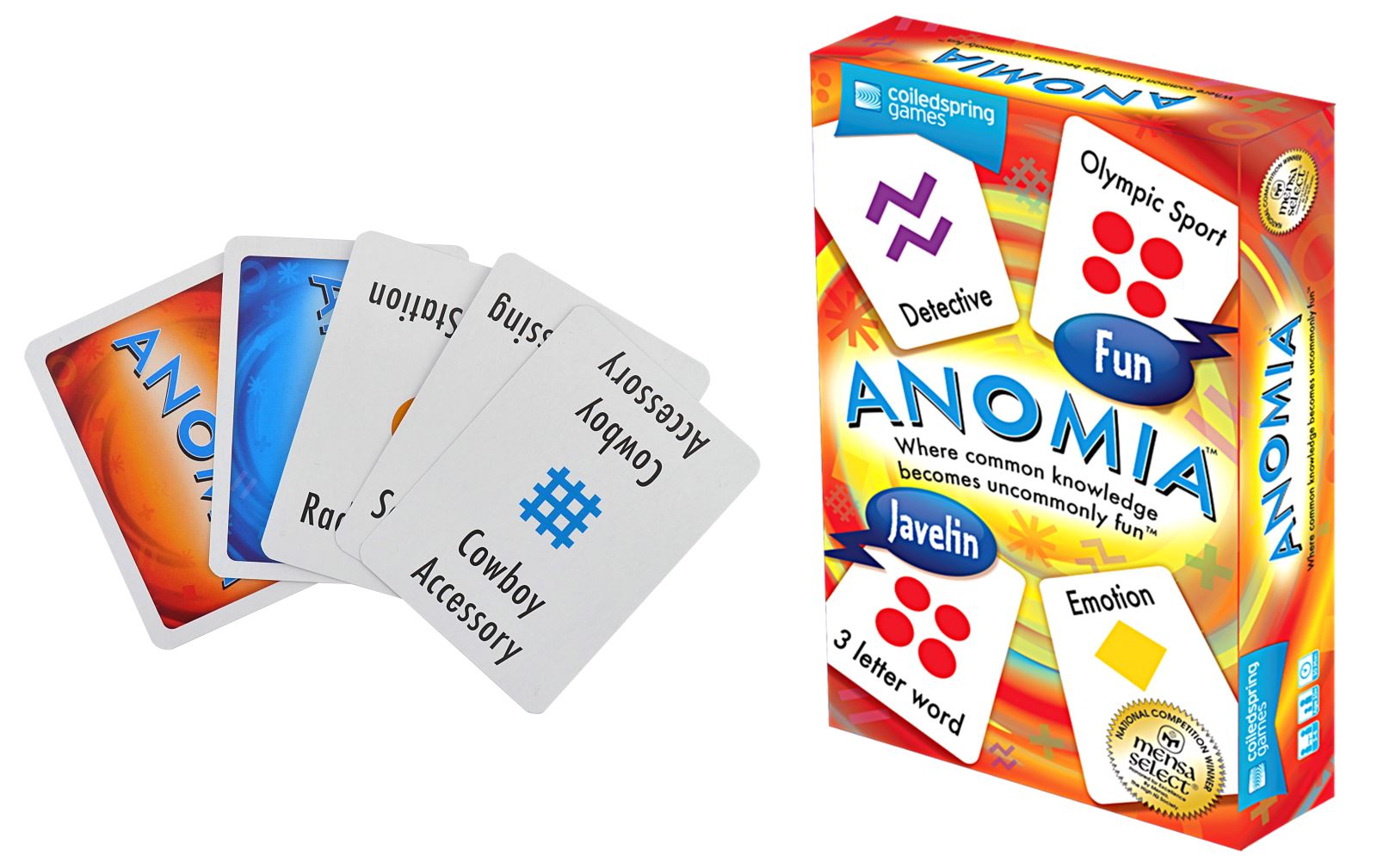 A brain-busting spin on Snap, Anomia hinges on your ability to recall connections between words. When symbols on two cards match, the pair of players must race to shout out something related to the category on their opponent’s card first. The topics are varied enough to keep things fresh for a long time, ranging from famous ghosts and radio stations to cowboy accessories and salad dressings, and the gameplay can be explained in 20 seconds, making it an ideal party game for families – or a real laugh once everyone’s had a couple of drinks. 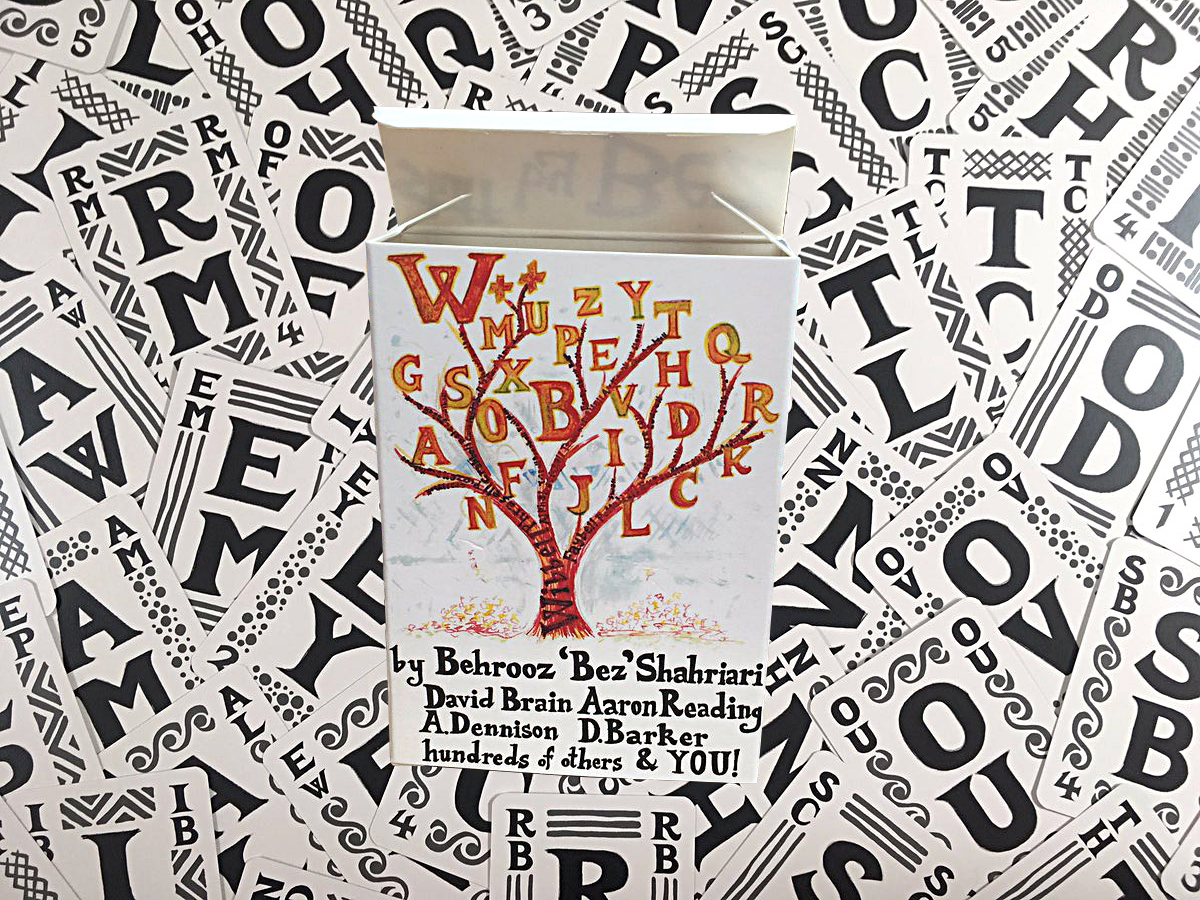 Wibbell++ is not just one game; it’s a deck of two-letter cards decorated with abstract patterns designed to be used as the foundation for a variety of different play styles. Five sets of rules come in the box, each distinctly different to the last; there’s a fast-paced card-grabbing dexterity game, a game about inventing phrases, a more traditional word-building setup, a game about forming sequences and a co-op storytelling variant. The titular mode involves shouting out words using letters from your own personal cards and a central card, which is then added to your hand and must be used in subsequent rounds. 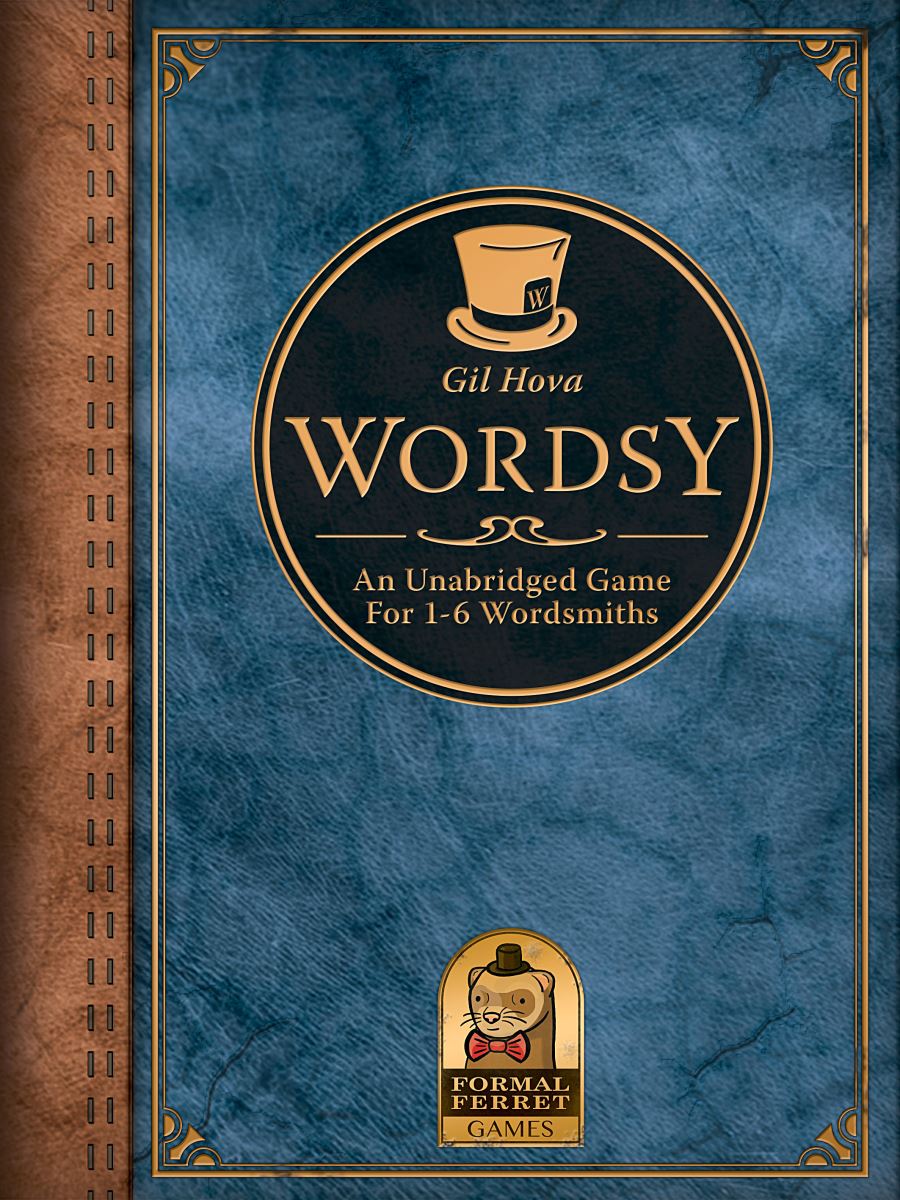 Solving the issue of never having the right letters, Wordsy allows you to form a word using any of the cards on the table and any other letters you need – whether they’re visible or not. Of course, the idea is to use as many of the cards as possible to rake in the biggest score you can (other letters score nothing), with harder letters offering bonus points. It’s a fun, smart twist on the formula – although you’ll never be able to blame a bad draw again. 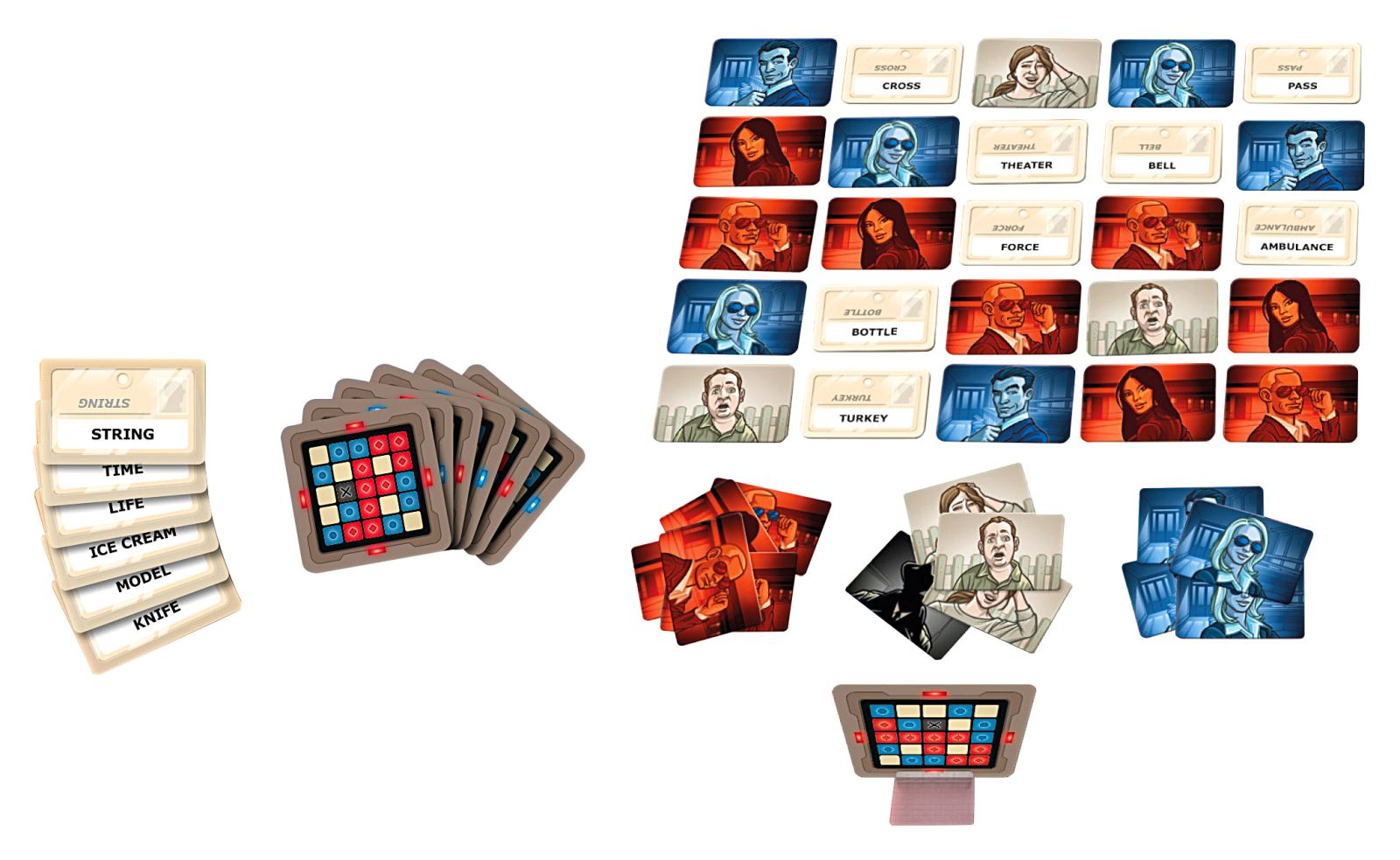 The recent Spiel des Jahres winner and party favourite might not involve spelling, but you still need to have a good handle on words to triumph. Two spymasters compete to communicate the location of their spies, hidden in a grid of words, to their teammates using only one word. The trick is hinting at multiple spies with a single clue, without accidentally leading your companion to an enemy spy or assassin. Think of it as a cross between Minesweeper and Taboo, odd as it sounds. It’s incredibly simple and easy, but continues to be lots of fun time and time again – a modern classic in the making. 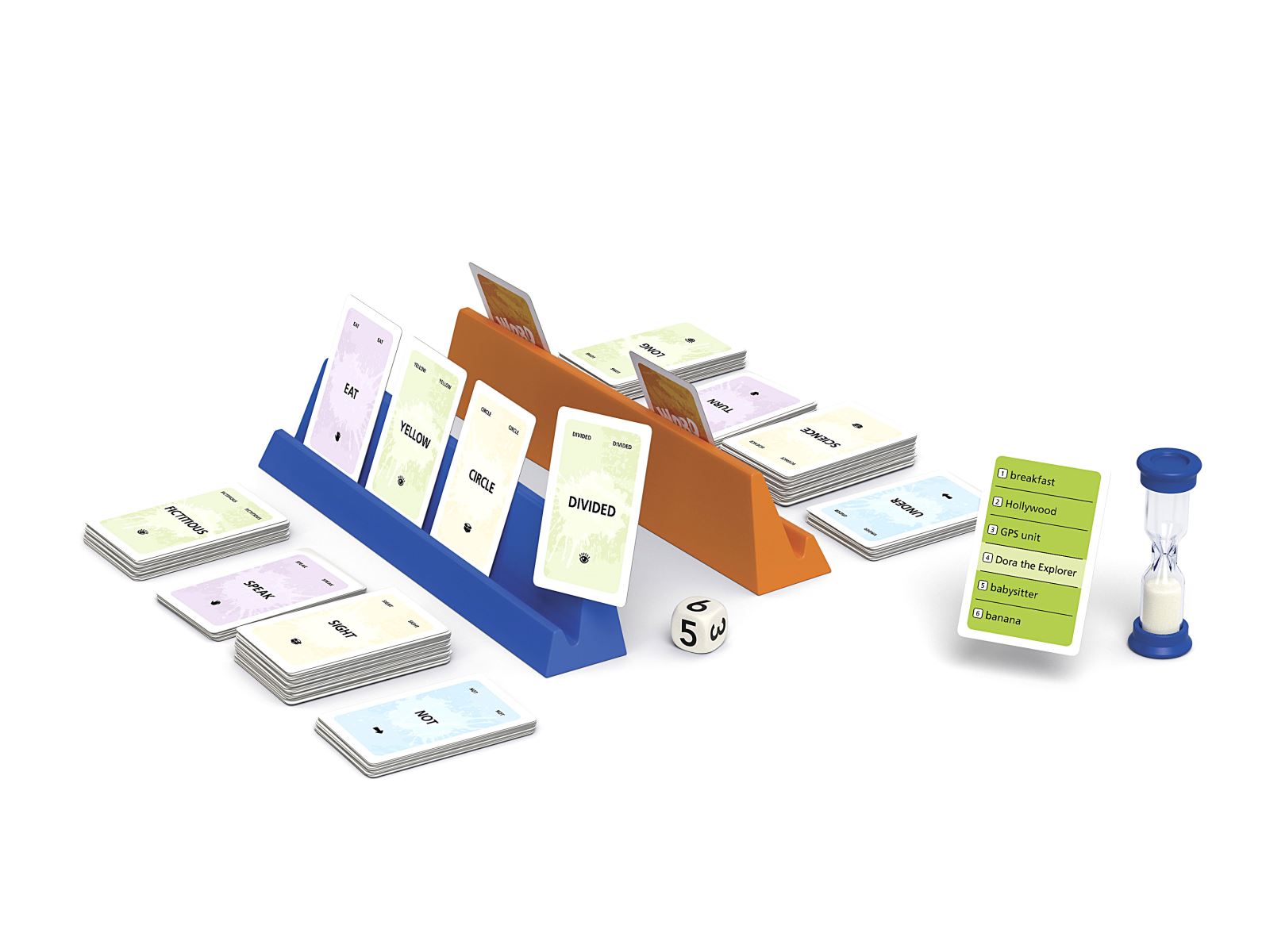 Following in the wake of Codenames’ success is Word Slam, which takes the one-word clue setup of the party hit and switches things around so players are describing just one answer to their teammates but can only use the single-word cards provided in the box to give clues without speaking or acting. So a banana becomes ‘eat, yellow, circle, divided’ – but ‘eat, yellow, circle’ could just as easily be a pancake or an egg. It’s a duel against the opposing team to solve each riddle first. If you liked Codenames, this should be right up your street. 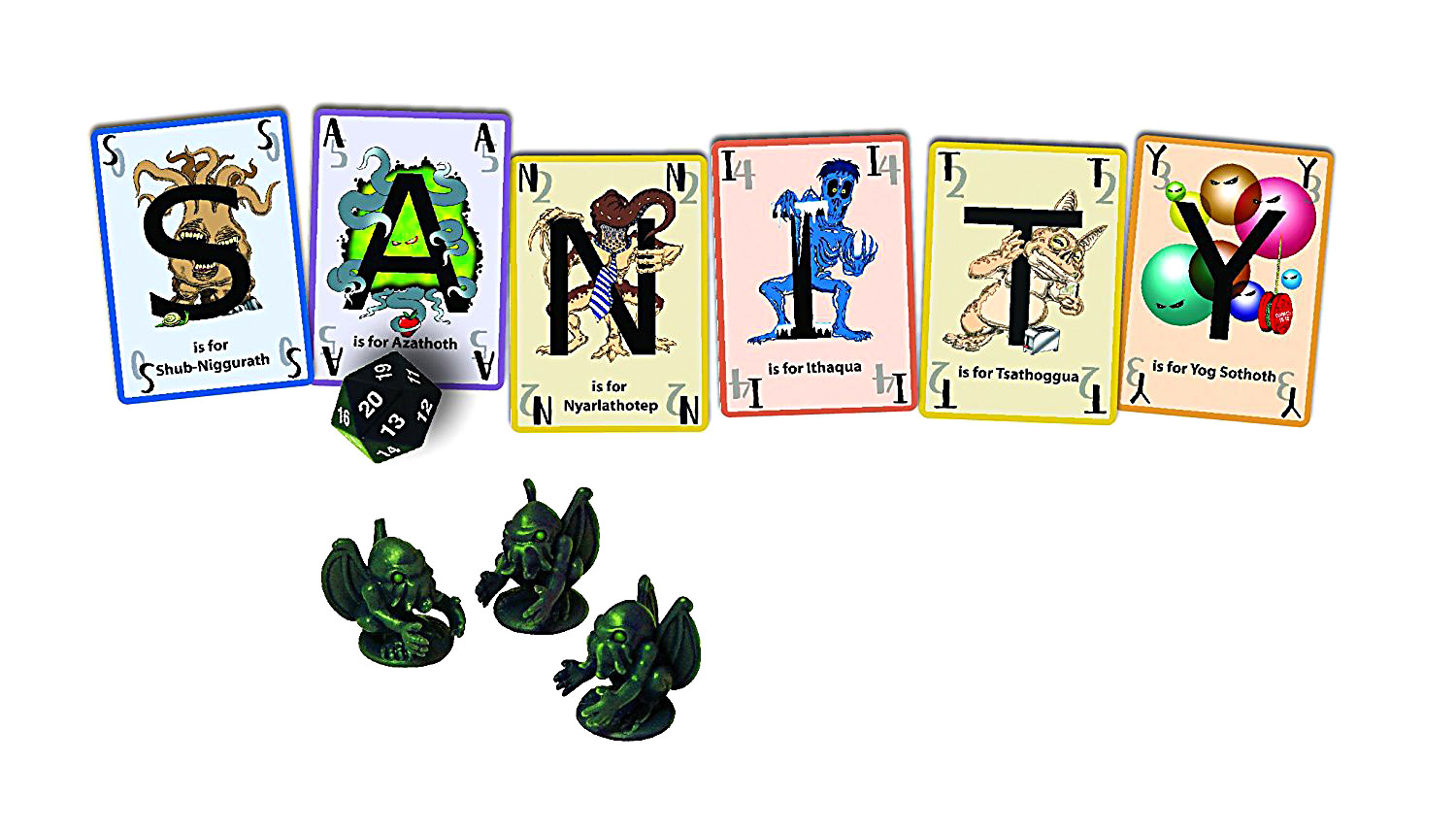 Here’s something a little different: a word game that is inspired by, yes, H.P. Lovecraft’s Cthulhu Mythos. The horror theme gives this a very different feel to many other word games, as players spell words using letter cards in their hand to score points but must roll a die to keep their sanity after each word is formed. Spelling longer words increases the chance of losing your marbles and failing the test means losing one your five lives, so sticking to shorter words can be safer – but taking the risk can mean raking in many more of the 100 points needed to win. It’s a neat twist on the often dry word-building format.

This article originally appeared in the August/September 2017 issue of Tabletop Gaming. Pick up the latest issue of the UK's fastest-growing gaming magazine in print or digital here – or subscribe to make sure you never miss another issue.