The best we found at the German game fair

Thousands of titles made their debut at the German game fair – and we were there to play as many of them as we could. Here are a few games from the show floor that caught our attention for being inventive, interesting or just plain fun 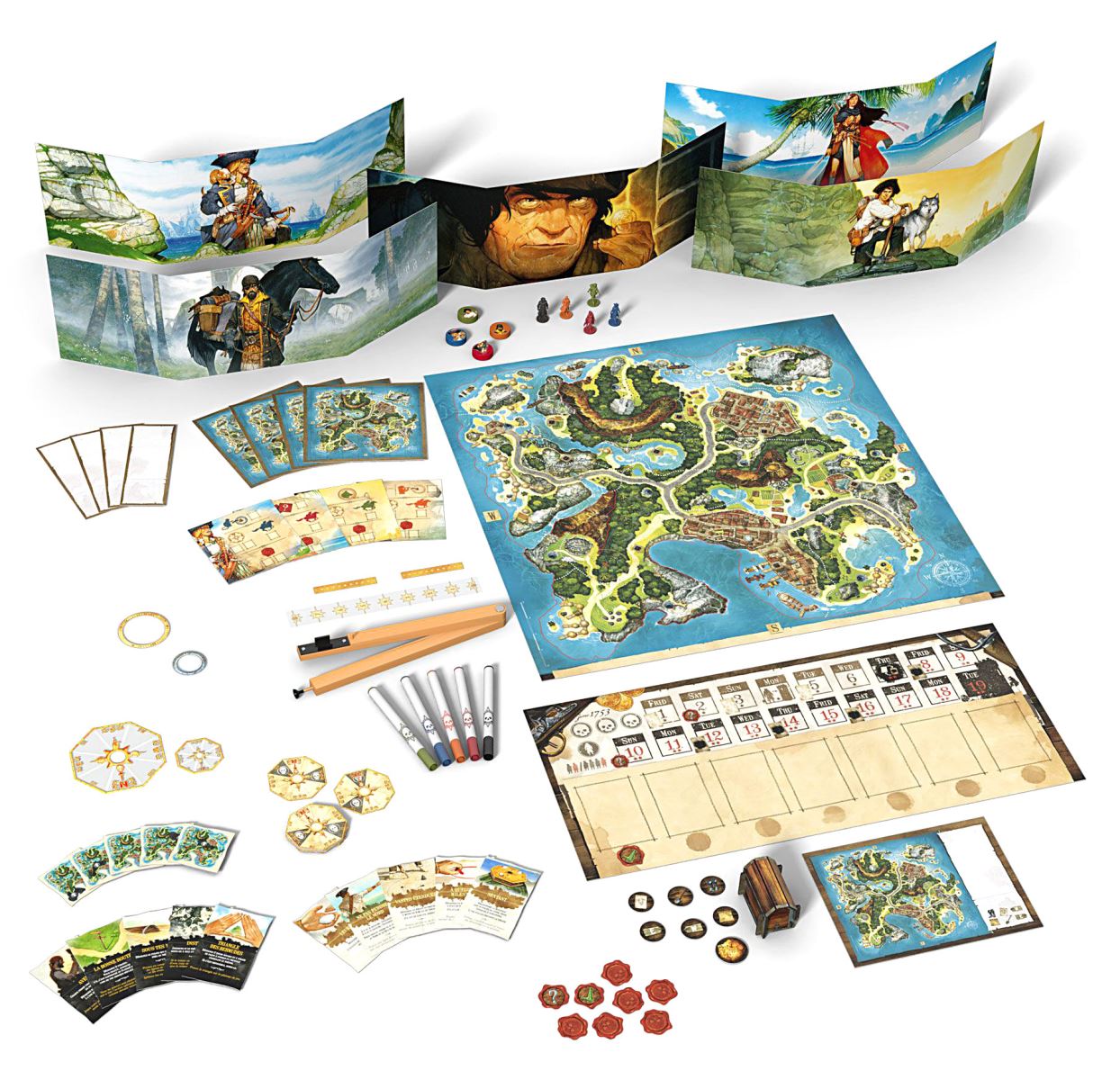 Yarrr, me hearties. This ‘ere be a fine search for glitterin’ booty on an island inspired by the classic pirate tale. One scallywag is Long John Silver himself, who has hidden his hoard somewhere on the board. The other salty seadogs are tryin’ t’ hunt down the fortune first by interrogating him, but old’ Long John can lie through his teeth like the scurvy curr he is! Long John can even draw on the board itself to give clues – and if his booty remains hidden long enough, even escape to try and flee with his treasure! 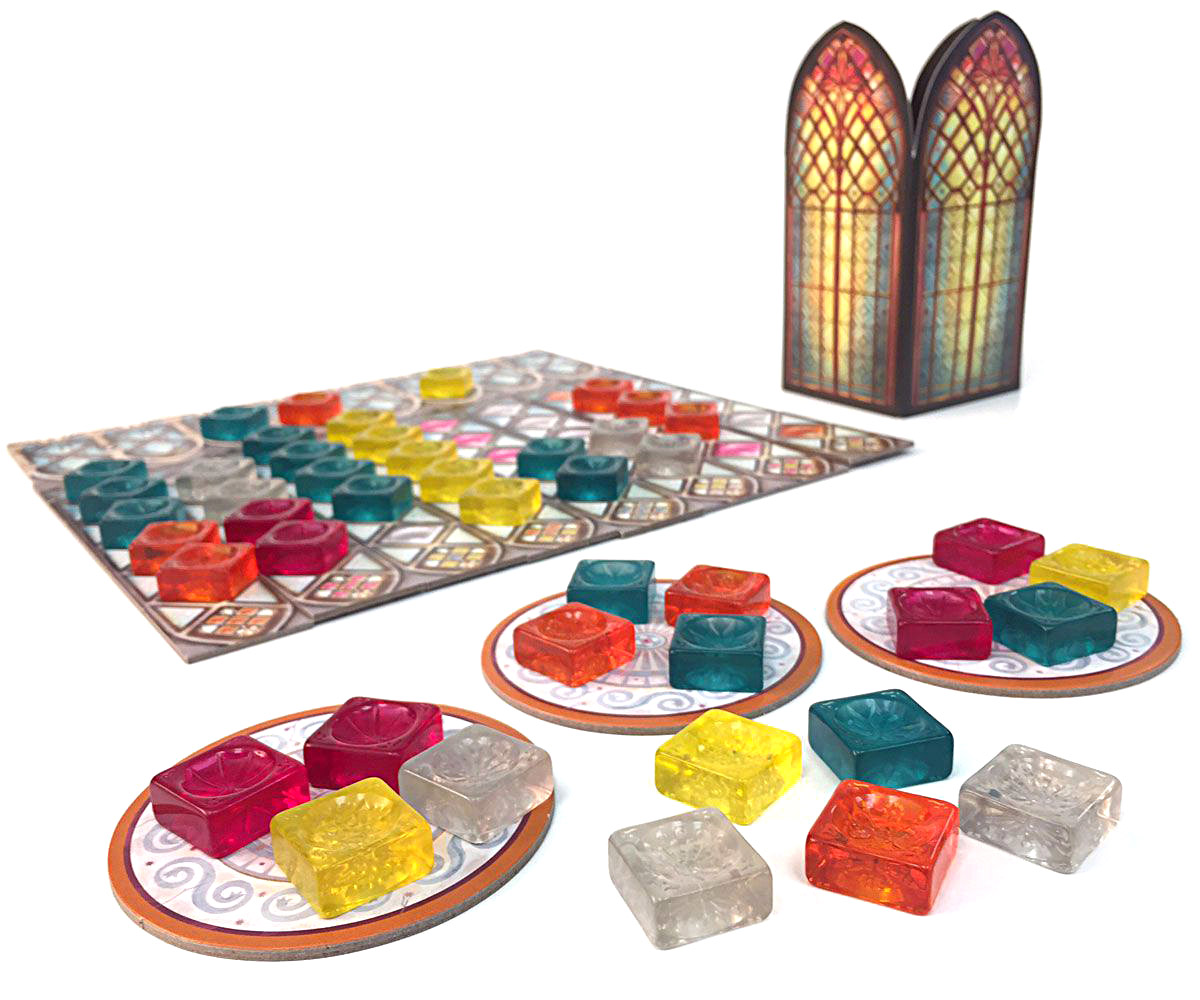 The follow-up to last year’s stunning tile-laying puzzle and Spiel des Jahres winner, Azul: Stained Glass of Sintra goes from the floor to the windows by swapping its patterns of floor tiles for Sagrada-like mosaic arrangements of glass panes – which are actually translucent! It’s more than a visual makeover, too, with some twists on the original Azul’s gameplay as players continue to race to make configurations but must take into account the position of their glazier as they collect and place panes. Another beautifully refined designed from creator Michael Kiesling complemented by eye-watering art and components makes it the ideal sequel to its masterful predecessor. 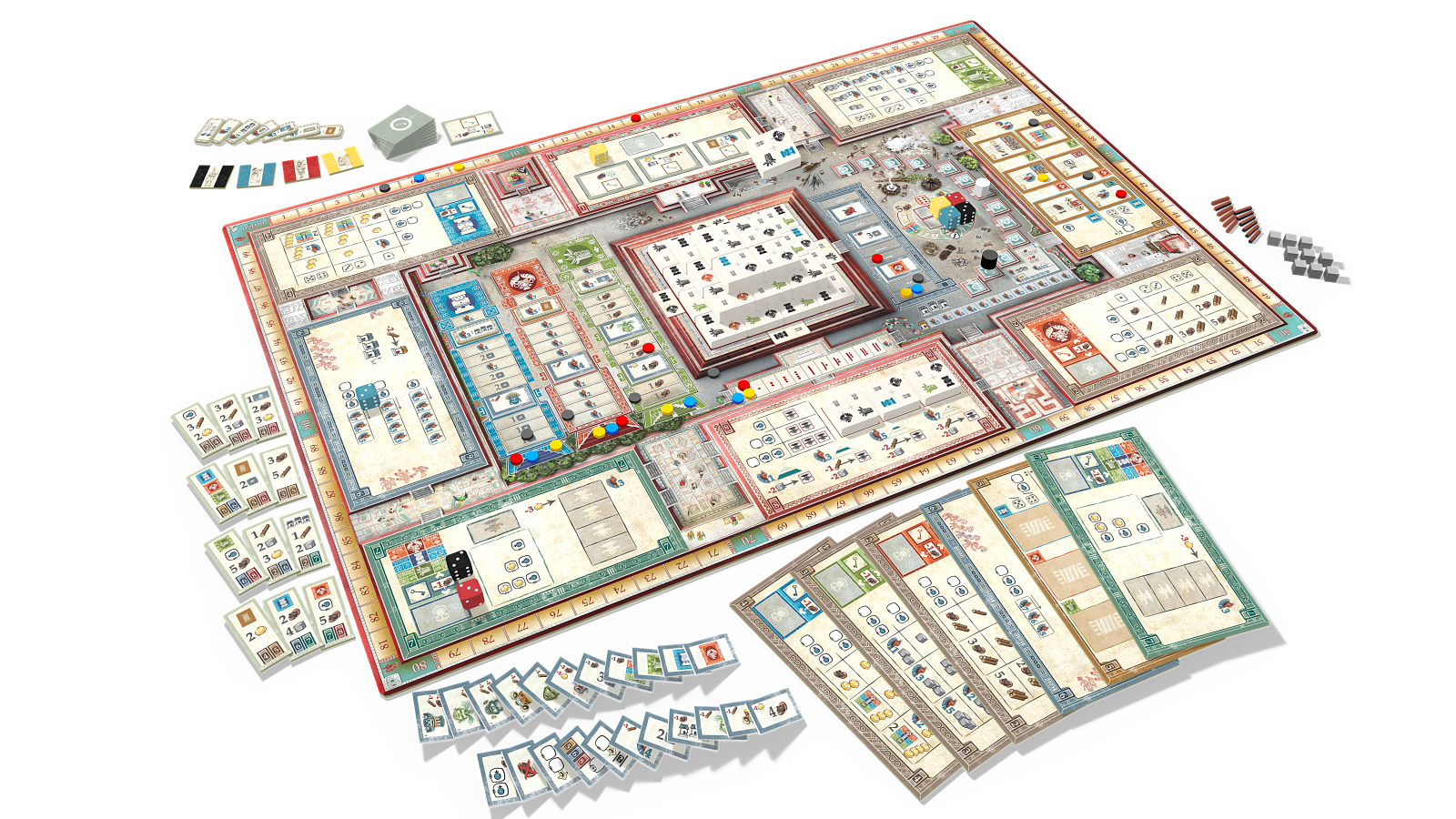 Set during the construction of the ancient city, Teotihuacan is a weighty worker-placement game that tasks players with commanding workers to contribute to the raising of the Mesoamerican landmark, hoping to earn their place in history by building the breathtaking Pyramid of the Sun. The game’s board serves as a sort of gigantic rondel that the workers move around, requiring the foresight to plan your moves ahead of time. Adding to the brain-burning gameplay is the way your workers grow in strength with each move, before finally ascending and being reborn. As grand and complex as the ancient civilisation it depicts, it’s a monumentally impressive experience. 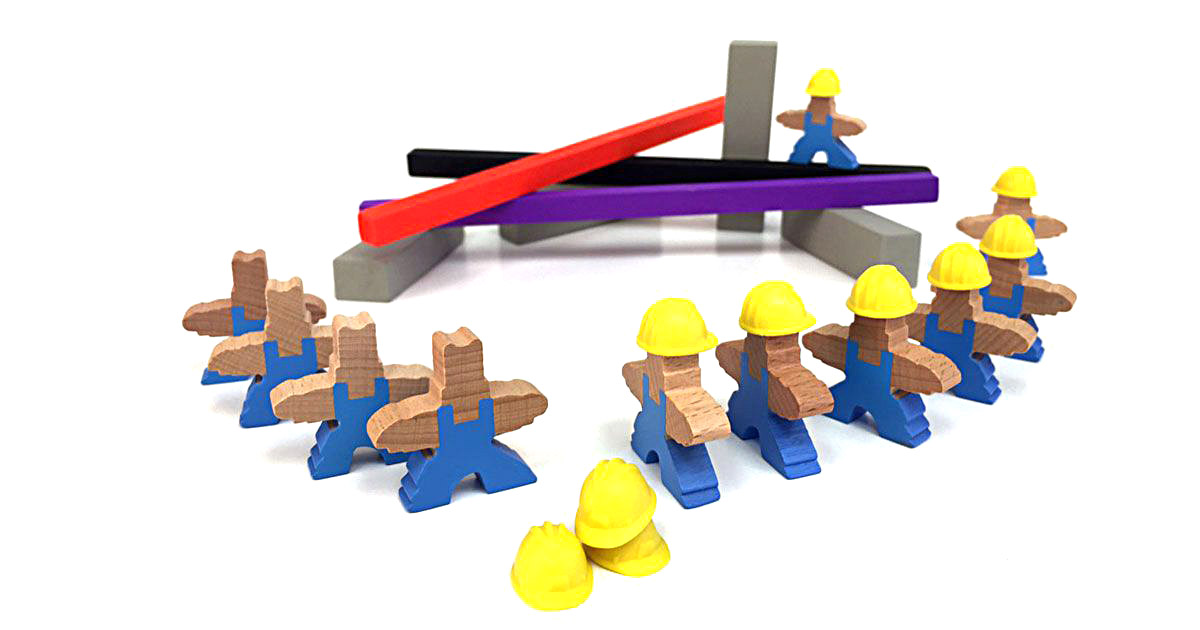 The latest delightful box of wooden playthings from the makers of Flick ‘em Up and Junk Art, Men at Work is a dexterity game set on a building site with a seriously questionable health and safety policy. Players steadily build the tower according to the instructions on cards they draw by placing girders and support blocks, but must also occasionally balance the brave workers working on the teetering construction, who have little more than hard hats to protect them from inevitable falls. Collapses will lose players safety certificates, while those able to keep the tower steady while making it higher than before will earn the Worker of the Month award from the boss, Rita, propelling them to victory. As with Junk Art, the box comes with several different ways to play – as if you need excuses to stack up towers of wooden blocks and watch them fall down. 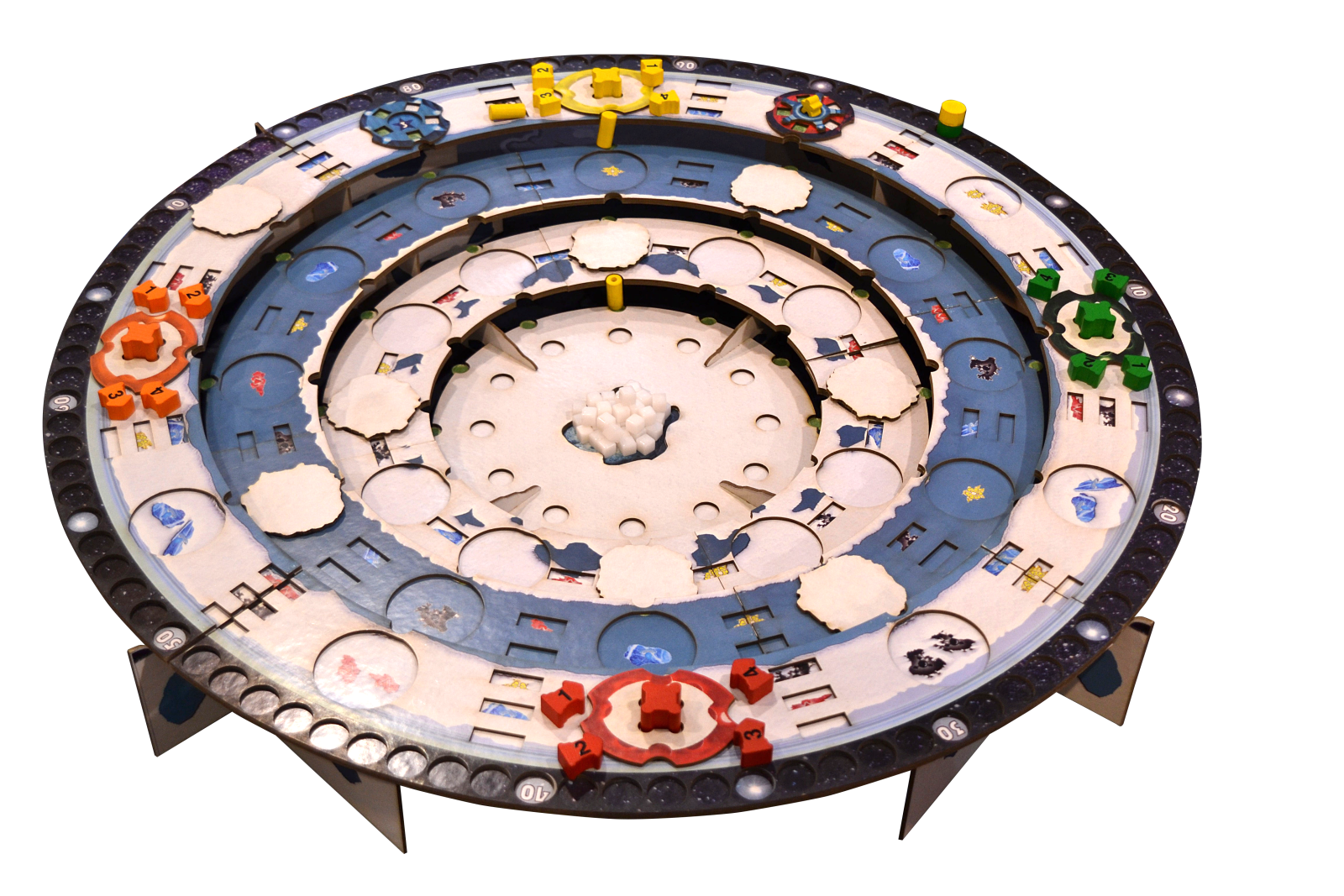 A Eurogame with a board as colossal as its name implies, Titan is a game all about mining Saturn’s largest moon (second-largest in the Solar System, if you’re wondering) for valuable resources. Players pilot their drones to construct pipes around and actually through the ring-shaped board, which features several three-dimensional layers. Hooking up pipes allows each corporation to gain different bonuses, using their growing network to harvest more and more resources and gain extra benefits from buildings around the ring. Due out next year, Titan looks to be a game and experience of epic proporations. 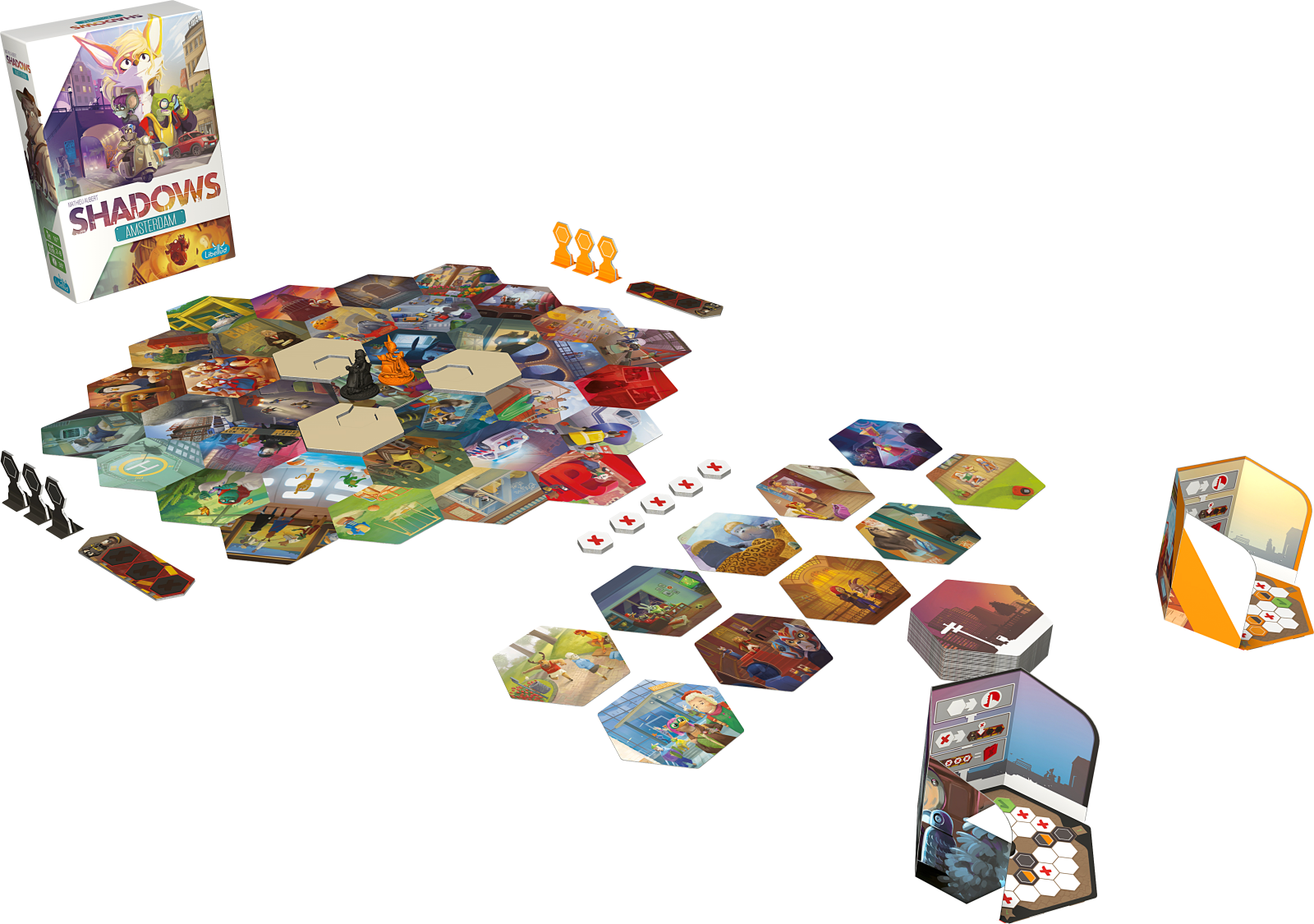 Take the visual deduction of Mysterium and Dixit and cross it with the competitive Minesweeper hunt of Codenames, and you have some idea of what Shadows: Amsterdam is going for. Teams of detectives race in real time to locate pieces of evidence and the client expecting them by decoding visual clues given to them by an intelligence officer that point out which destination they need to go to. On some of the wrong squares they’ll encounter police, who will put a stop to their plans if they’re spotted too many times, making working out what the combinations of pictures mean crucial to winning. With easy rules, quick rounds and an exciting premise, could this join the ranks of those hallowed family party games? 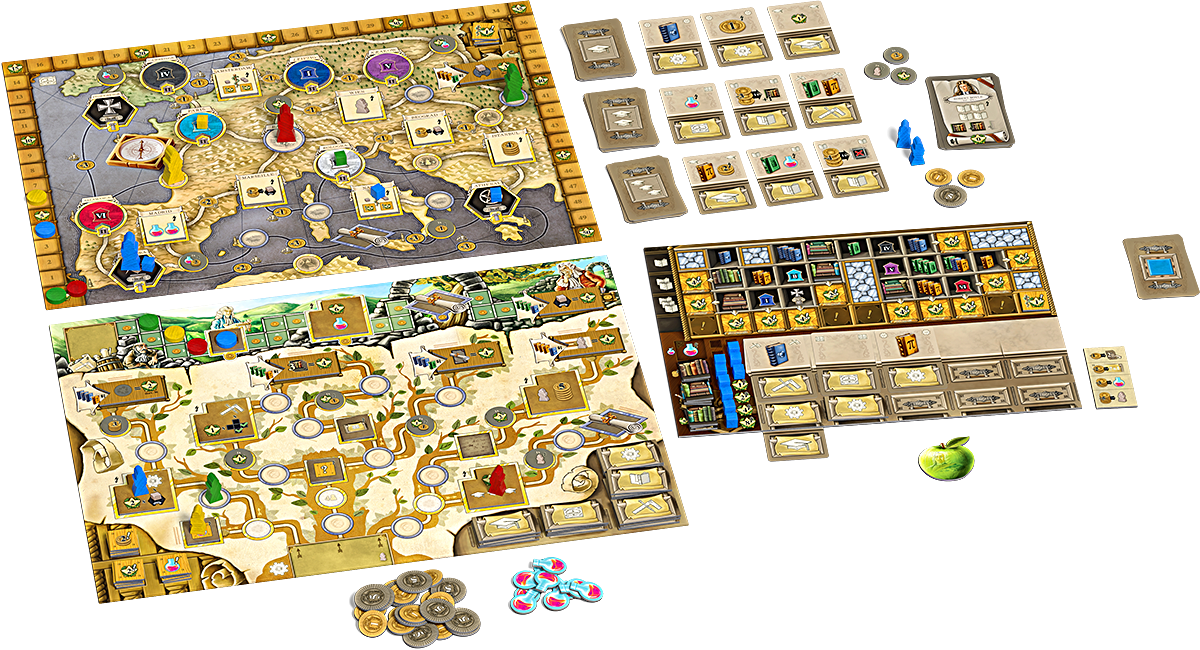 Newton’s first player marker is a miniature cardboard apple, but it’s unlike to give you a eureka moment if it falls on your head. Luckily, this Eurogame’s mixture of hand management of its action cards and board-based strategy should give you plenty to get the grey matter going. Playing cards allows players’ budding scientists to travel around Europe, picking up knowledge at universities and discovering theories – while working to make ends meet in-between their intellectual pursuits, of course. Along the way they might meet some of the most influential figures of the 17th century, hoping to obtain enough victory points to leave their own mark on history. A clever theme with clever gameplay, it may well end up being the apple of your eye. 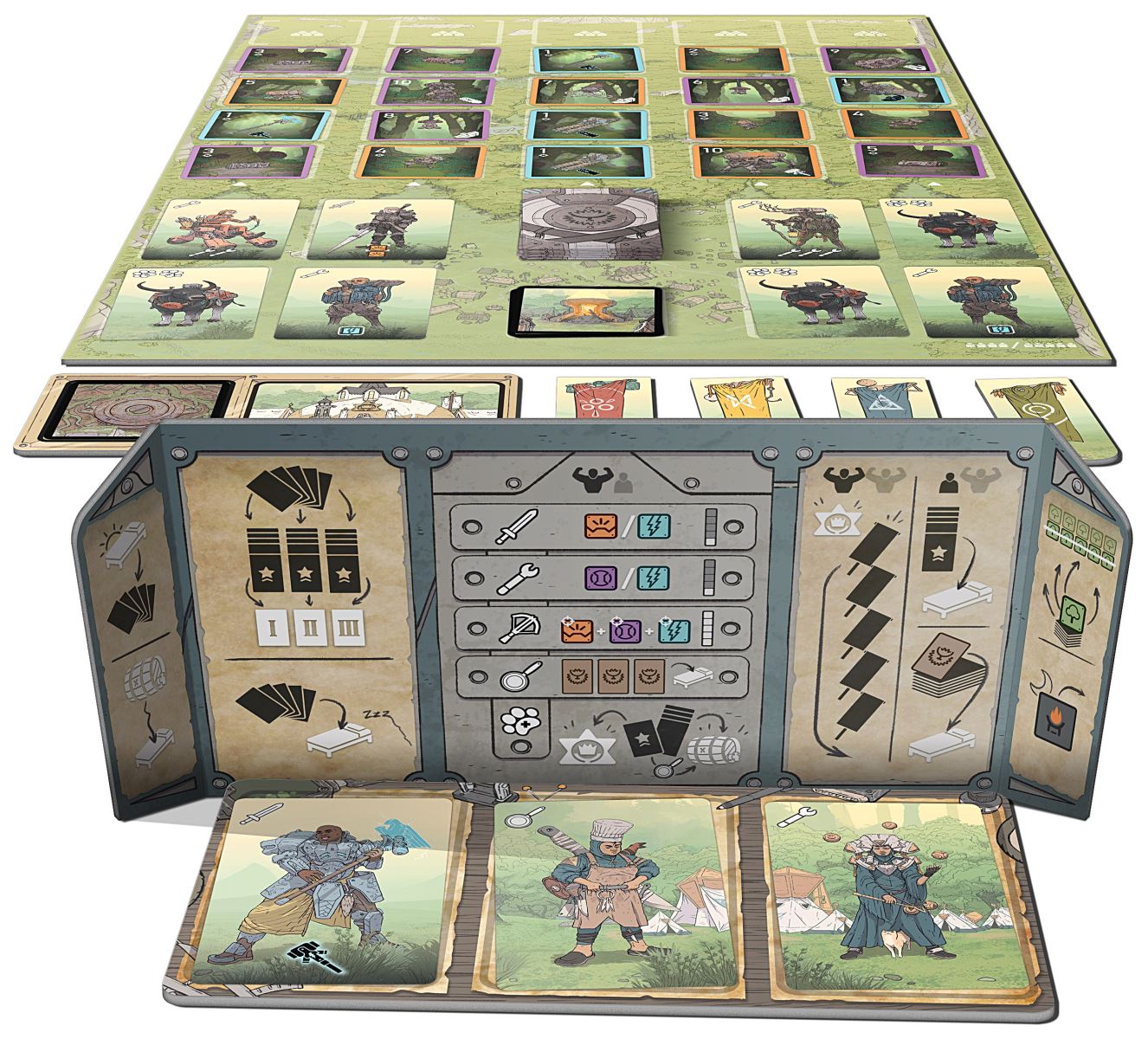 The second highly-anticipated game from Noria creator Sophia Wagner, this lavishly-illustrated fantasy adventure puts a twist on bidding gameplay as players form groups of heroes to venture into the forest. Only the strongest groups get to ultimately perform their actions, defeating monsters and retrieving artefacts to impress the king – but doing so means losing heroes that could help in future rounds, meaning you’ll need to manage your roster of warriors, technicians, hunters and cooks carefully to avoid ending up with a load of useless weaklings. With Wagner’s interesting mechanics set against the backdrop of illustrator Max Prentis’ visually striking artwork and world, The Boldest lives up to its name as a bold creation we’re keen to see more of. 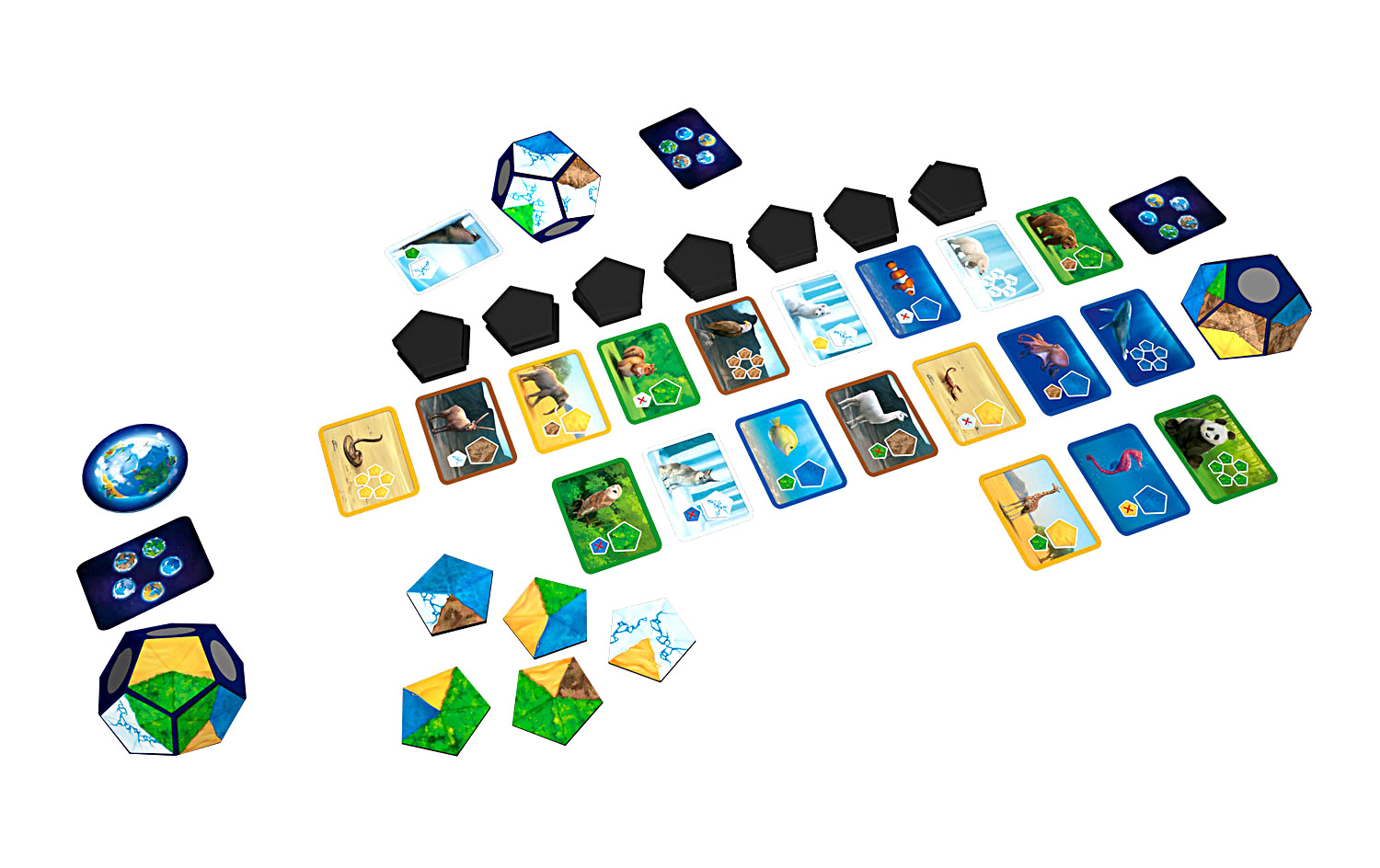 Putting the whole world in your hands quite literally, Planet is a tile-placing game with a difference: the difference being that you’re plonking sections of terrain onto a 3D globe you can hold and rotate in your hands. The magnetic core is gradually covered by deserts, forests, oceans and glaciers that must be arranged to form the right conditions for life to thrive, with animals emerging to grant players points as their environments take form. With its charming 3D planets giving a fun new dimension – literally – to the simple strategy of placing tiles, Planet looks to be a world of fun. 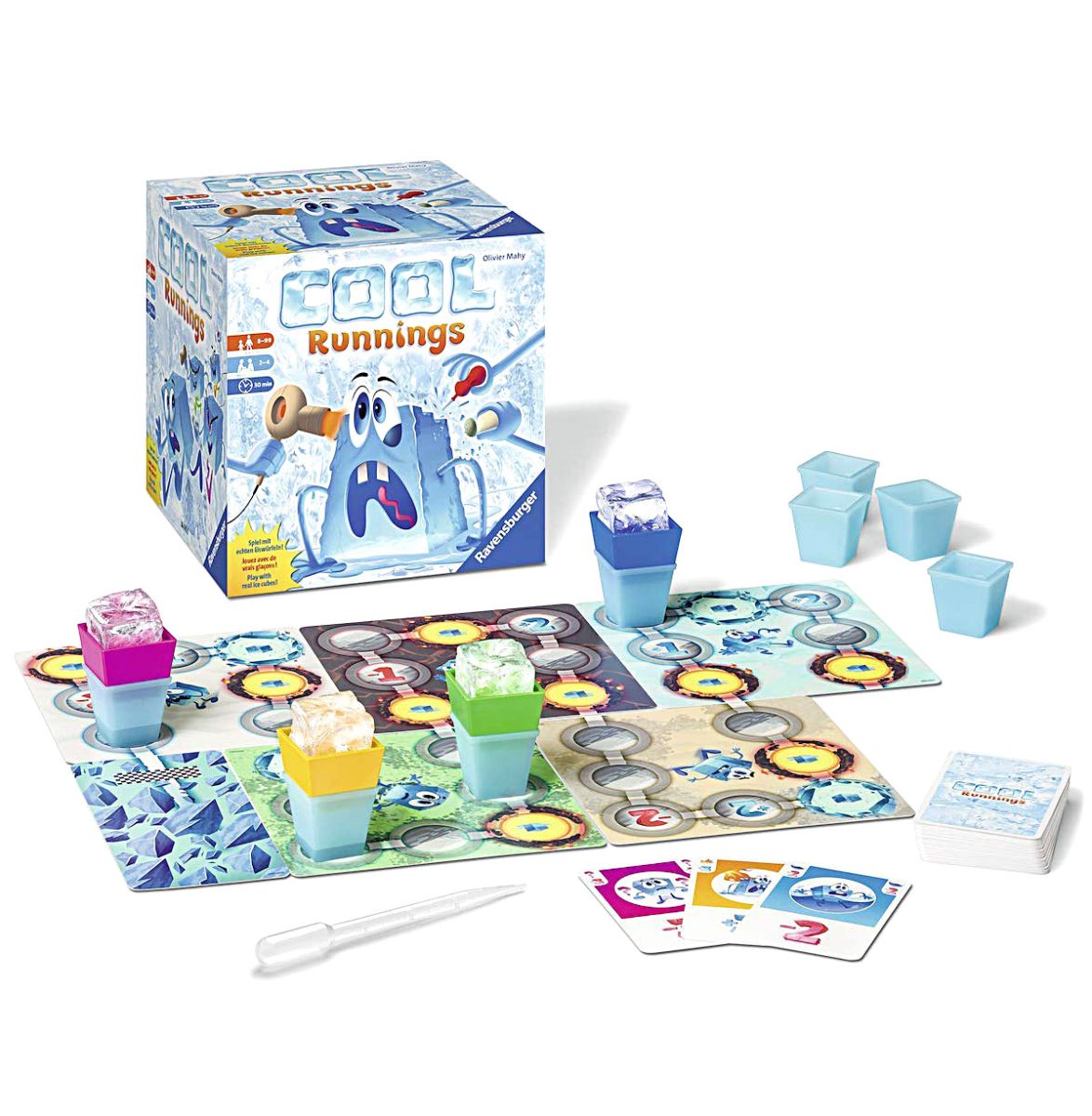 A lighter affair than many of the games on the show floor – and the benefit of sharing its name with a certain memorable film about an Olympic bobsled team – Cool Runnings has a really amusing idea at its centre. Every player’s piece on the board is made out of ice – real ice, from your freezer – and must try and survive harrowing assaults by salt, water bath and even being rubbed in the hands of an opponent. The gameplay is a relatively simple race around the track driven by cards that players lay down to move the characters forward – and backward – and determine their next melting attempt. But if the player you attack defends successfully, you might find your own cube being liquefied. Sure, it’s silly and a bit of a gimmick, but that doesn’t take away from the hilarity of trying to see your friends’ hopes of victory reduced to little more than a puddle of salty water. Just maybe don’t play in the sun – or it’ll be a short playthrough indeed.