The Initiative with Corey Konieczka 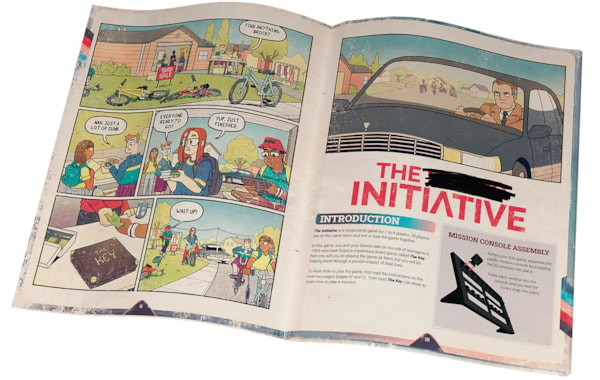 Corey Konieczka is possibly best known for his work at Fantasy Flight making the Battlestar Galactica Board Game. Now running his own Studio, we ask, what can we expect from Unexpected Games?

Corey Koniecazka currently holds five top 100 BGG positions, most notably for Star Wars: Rebellion, Mansions of Madness First Edition, and Battlestar Galactica: The Board Game. The designer spent some 14 years at Fantasy Flight games, making some of the biggest games to define the hobby – but now Koniecazka has set up his own studio, Unexpected Games, bringing all of those years of experience to bear on a completely new direction.

“I designed dozens of games and expansions and I was later tasked with leading Fantasy Flight’s design department and got to work with tons of talented people,” says the designer, “but I founded Unexpected Games in 2019 as a place to focus on innovative new games. We’re a tiny studio, but our goal is to provide blockbuster quality and memorable experiences. Over the years I had collected dozens of game ideas that were just not a good fit for FFG.  I also had a strong desire to make games that were vastly different from what I had done in the past. I see lots of opportunities for innovation in board games, and I felt like starting my own studio was the best way to do pursue this.” 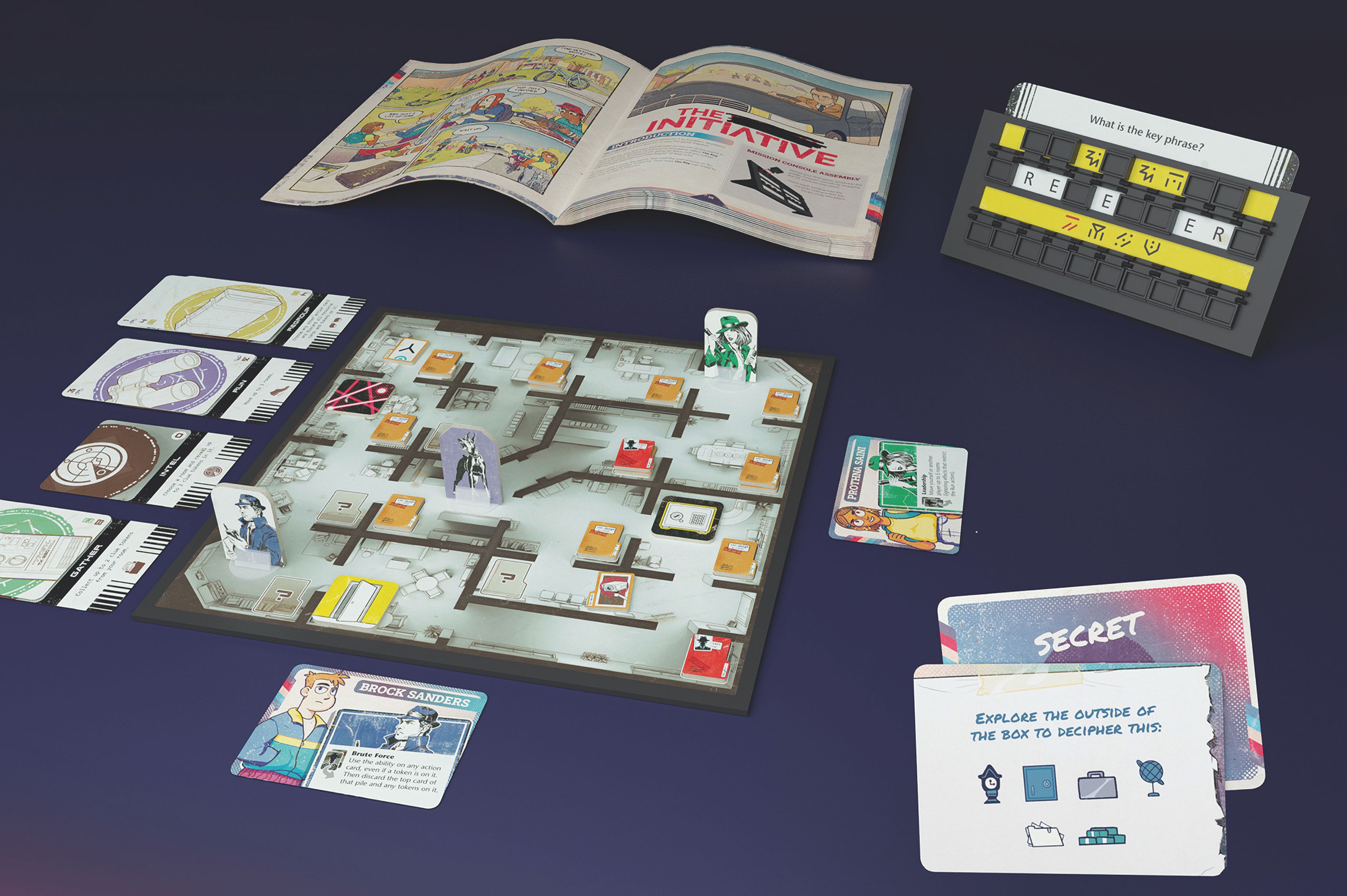 And the first one is this, The Initiative, or if you look at the game’s box, The [crossed out] Initiative. So, what is it?

“Well that’s the real question isn’t it?” laughs the designer, “that is exactly what you’re trying to figure out.”

The game is a narrative puzzle game, set in the 80s/90s – or at least the blurry cultural memory of those times – and focuses on teenagers. It’s not just a Stranger Things style riff on the time period though, it’s got a little bit of Jumanji about it.

“The story starts with a group of four teenagers buying a strange board game at a yard sale,” says Konieczka, “as they play it, they discover that the game is tied to their lives in strange ways, and they vow to discover the mysteries surrounding the game.”

“I often describe it as a game within a game, or a game of many layers,” says the designer, “the story itself is told through an integrated comic book. Before each session, you read a page of the comic and it sets the stage for what’s to come. The gameplay is a unique blend of strategy and puzzle solving that is quite unlike any game I’ve ever played. The game is full of secrets and mysteries for you to unlock and discover.”

When you put the game, and associated comic book, out on the table in front of you you’re playing characters in the game who are playing a game. You’ll be faced with a number of puzzles that can include anything from keycodes to secret phrases – deciphering using the environment, or even the box, as the promotional material suggested. You can even have a go at that task on these very pages.

“When the kids in the story play their copy of the game, you play as them and determine their fate,” explains Konieczka, “the core gameplay itself starts out pretty simple, but grows in complexity as you play more games.”

“Players are spies sent off on secret missions to infiltrate enemy territory and decipher secret codes. At the start of each game you get a large mission card that defines setup and your goal for the game. Each mission card has a solution that you need to discover in order to win the game. These vary greatly, but examples include discovering a key word, a number sequence, or a wide variety of logic puzzles.”

Players move about the board, looking to collect clues that they can use to work out the codes. These might be simple pictograms that lead to a phrase. Or something that helps them translate the hieroglyphics on the key phrase board.

“Players use strategy and a unique card system to collect clues, avoid traps, and try to solve the mission.” 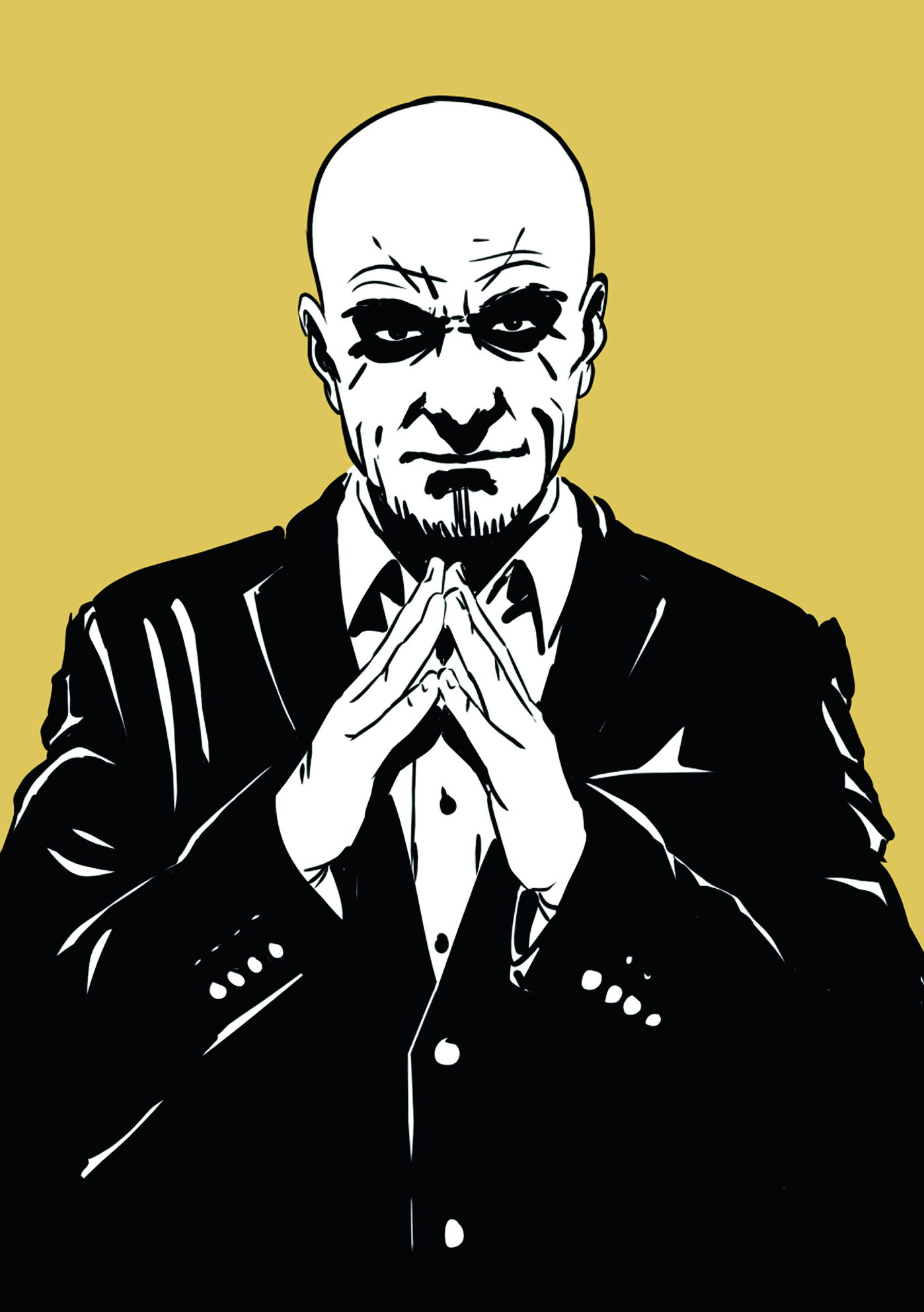 “I’ve worked on a lot of narrative games, and they always rely on blocks of flavour text to convey the story,” says the designer, “I thought that it would be much more powerful to actually see the events unfold. This allows you to connect with the characters in a deeper way and have a new board game experience. I’ve always loved creative writing, so it was really fun to write in comic book format. It is a very powerful medium, and I think more board games will use it in the future.”

The characters on these pages are drawn from life, “the characters are in part inspired by my childhood,” says Konieczka, “one year, I was part of a close knit group of four friends and we were inseparable. We each had very different personalities and interests, but we became very close despite our differences.”

“At the surface level, the characters appear to be common archetypes – the clown, the tough guy, the leader, the quiet one – but it was important to me that they weren’t one dimensional characters,” explains Konieczka, “each character has a personal demon that they’re wrestling with and you get a chance to confront them at different points in the story.”

The codes themselves are less lateral thinking puzzles, as seen in escape games like Unlock!, and instead are more accessible and direct, “in most situations it is pretty clear what your goal is and you just need to figure out how to get there,” says Konieczka, “The game was designed so that people who know nothing about code breaking will be able to play. In fact, early in the story we teach you some of the basics of code-breaking in a unique way.”

“Many of the codes that you find in the game are optional, and players will decide how deeply they explore this aspect of the game,” continues the designer, “it was also important to me that we not punish people for lacking code-breaking skills. If cracking a code is mandatory to progress the story, we hold your hand – if you need it – to make sure you don’t get stuck and unable to progress.”

That’s not to say that it’s not a game with challenge of course – Konieczka is a designer with a pedigree in making interesting choices central to his games.

“There are a few situations that require you to think outside the box, and these moments are very rewarding. I want to avoid spoilers, but I can say that there is at least one big thing that has never been done before in a board game,” says the designer, “with the puzzle aspect of the missions, I designed them to slowly build up your knowledge of how the game works. Each chapter of the campaign slowly increases the complexity and we occasionally flip things on their head.”

“The goal was to keep challenging players and to keep the game fresh all the way through the campaign.” 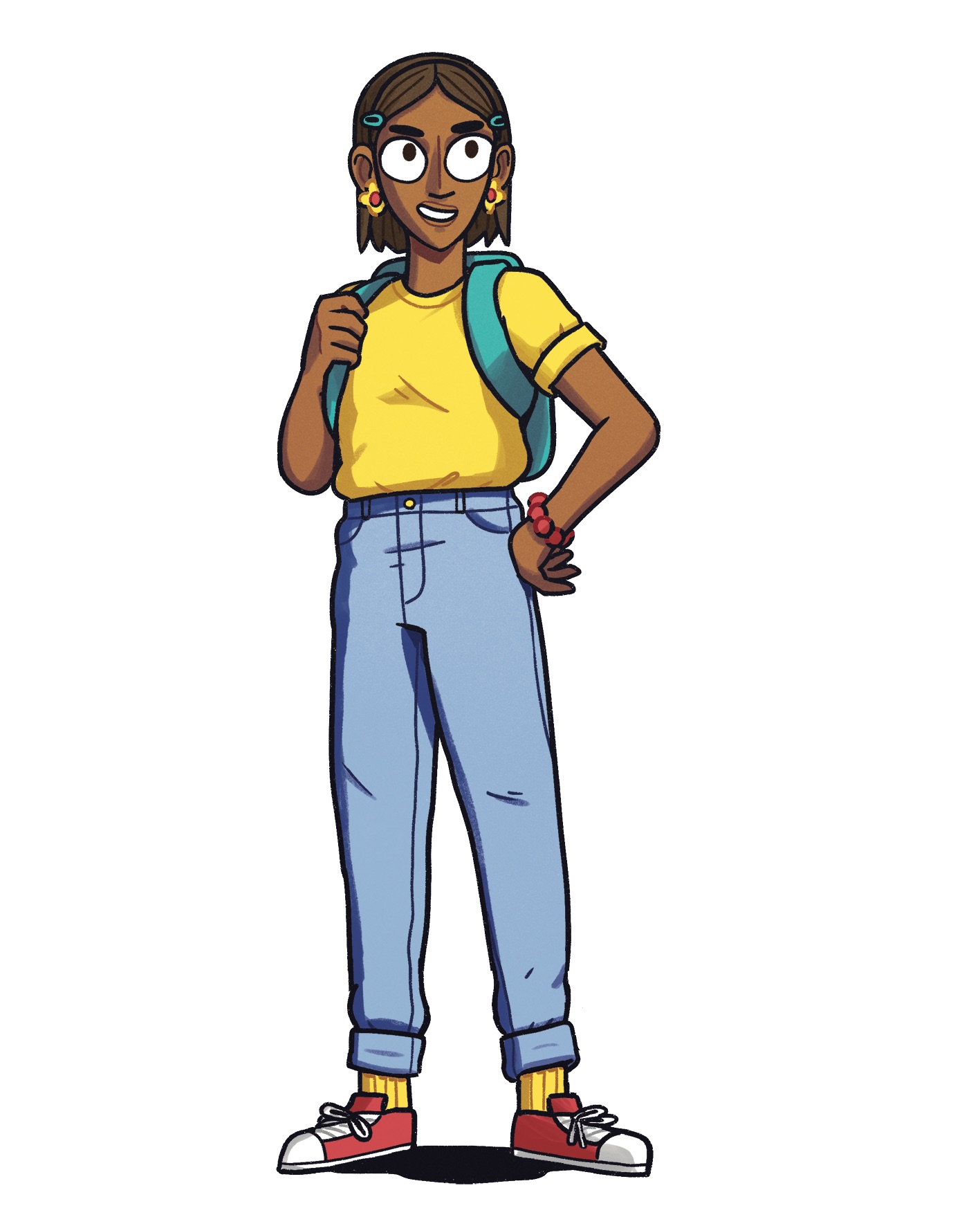 Telling stories is an important part of gaming for Konieczka, and now, more than ever, he is in the position of an auteur. We asked him to draw a line from his earlier work – for example the back-stabby Battlestar Galactica game, to this tale of teen roleplay and spywork.

“I love games that tell stories, and I think Battlestar Galactica and The Initiative tells stories and explore humanity in different ways. The emotion of Battlestar Galactica is very much about distrust and betrayal, while the tone of The Initiative is about mystery and the being a teenager. Children are dreamers that see the world very differently than adults,” muses Konieczka

“Mapping this to my personal journey, when I was making BSG I was in my mid 20s and newlywed. Now I’m in my late 30s and I have a kid of my own. As a parent, I have a new perspective. It gave me a strong desire to revisit the lost days of youth; when we felt like we could change the world.”

Changing the world might be a youthful urge, but this game seems to be a product of Konieczka’s own maturity. With that comes the approach to failure in the game. Failing a mission isn’t the end of the game, but like life, there’s no restarts.

“One thing that I find mildly annoying with pure puzzle games is that you can sometimes become stuck and unable to proceed,” says Konieczka, “if players get stuck on a mission in The Initiative, they can always compensate for this by excelling at the strategic part of the game to gain more information.”

“Also, instead of becoming permanently stuck, you can actually fail a mission. When this happens, the story will continue but there will sometimes be repercussions. The other downside is that winning missions can provide benefits at future points in the story.”

And as with any game that looks to give you the opportunity to fail forward, there are multiple endings to the campaign. 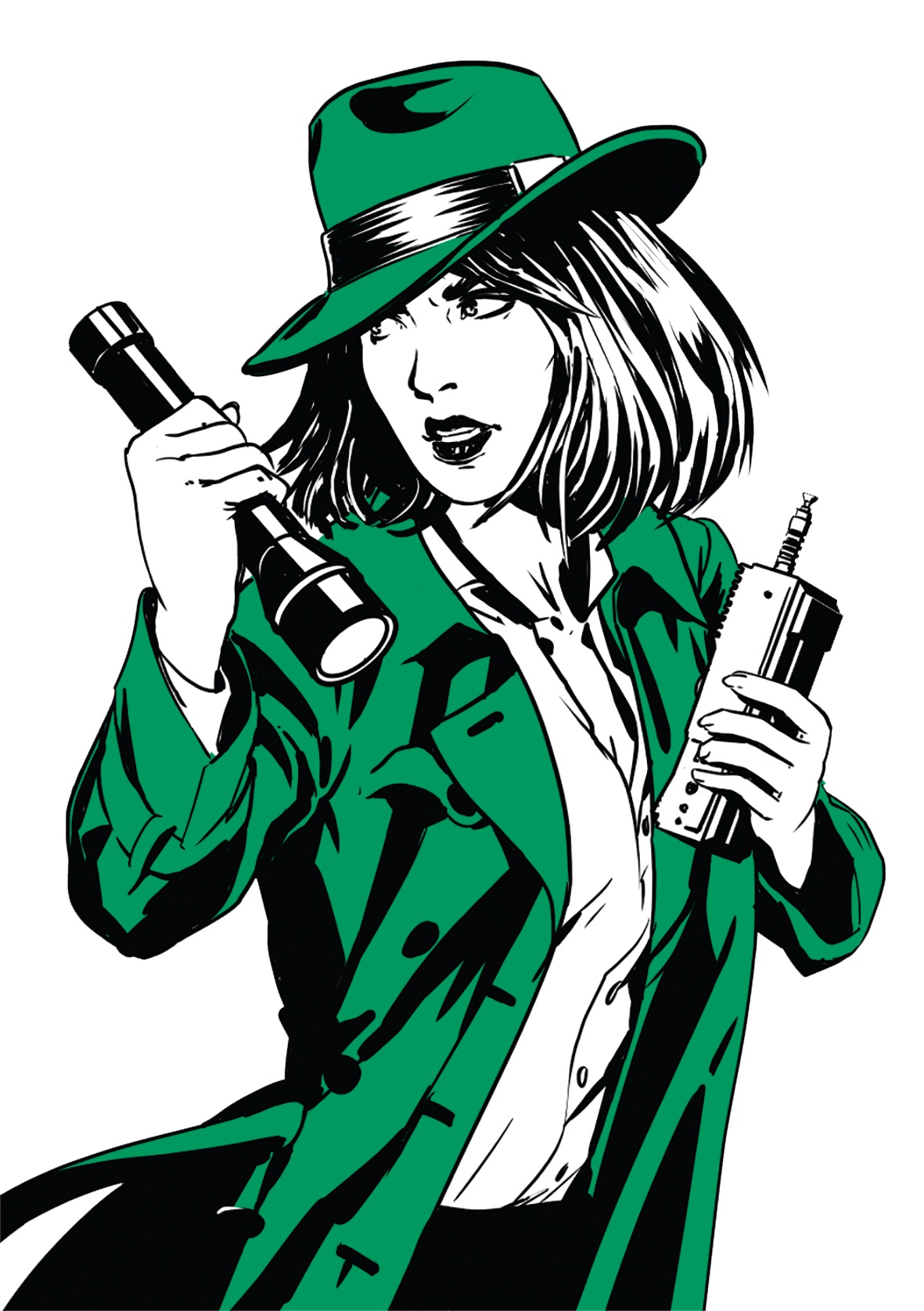 “Eventually, you will reach the end of the campaign. Based on your performance and the choices you’ve made, there are four possible endings that you can encounter. Some are much better than others,” says Konieczka. Yet this isn’t the end.

“After you beat the campaign, there is still tons of content to explore. There are dozens of bonus missions that include their own secrets and mysteries. Some of these really turn the game on its head.”

Bonus content aside, where does the designer think narrative driven games are headed?

“I am hopeful that people will keep experimenting with new mediums and finding new ways to tell stories,” says Konieczka, “I would guess that we are not yet at the golden age of narrative driven games. But that may just be because my eyes are locked on the horizon and what the future may bring.”

Konieczka is currently wrapping up his second title for Unexpected Games – which he promises is “very different from The Initiative. We won’t be talking about it for a while now, but the tone and style are quite different than anything I’ve done in the past. Then I’m turning my attention to game #3 and beyond. It is exciting times.”

Looking for more mystery? Take a look at Cantaloop

Read the review of Star Wars: Rebellion, another Konieczka title