Alessio Cavatore explains how destiny appropriately shaped a game about the fate of humanity.

Terminator Genisys The Miniatures Game is very much a game about destiny – the fate of humanity being key to not only the game but the film itself. There’s even a fate system used in the game mechanics, which we’ll explore later, but even the game’s origins came down to chance.

You see when its creator, River Horse’s Alessio Cavatore (famous for being the brains behind Games Workshop’s Lord of the Rings and Mantic’s Kings of War), set up a meeting with Paramount Films to discuss a potential licensing deal, he wasn’t even thinking about Arnie and the Terminators, instead he was there to discuss a different film entirely.

“The meeting went very well and we agreed on the other licensing deal, which we will be releasing next year,” explains Alessio. “Then towards the end of the meeting they said oh by the way we have this other thing you might be interested in… did you know there’s a new Terminator film coming out next year. Would you like to make a game based on that?

“The only problem was that the time for creating and releasing the game was extremely tight. The meeting was around October and the film was scheduled for July, which didn’t give us long. Normally I like to spend a year working on something like this but we only had a matter of months. Still, it was one of those licenses that we really couldn’t turn down so I said yes.”

Luckily serial games designer Alessio had a little trick up his sleeve because he had already designed a ruleset, currently known as the River Horse Miniatures Game System, that could be applied to Terminator, ensuring that he wasn’t starting completely from scratch. Variants of the same ruleset could be used in other River Horse games, including that other mystery license acquired from Paramount.

The tight timeline also affected how Alessio and the River Horse team had to approach production too because there simply wasn’t time to go to China to make the miniatures. “We’ve had to stick to British companies like Warlord Games and Renedra for the manufacturing but there are definite benefits to working with people who are so close to home and I definitely think that’s helped with the development process,” added Alessio.

Terminator Genisys The Miniatures Game is a mix between board game and more complex skirmish game, with the option of scaling it up into a fully fledged wargame. Included in the box you’ll find 10 Terminator Endoskeletons, five Terminator Crawlers, 16 Resistance Soldiers and an exclusive Kyle Reese model, plus a double-sided playmat. There’s also a cracking 128 page rulebook that includes basic rules along with advanced rules, plenty of different scenarios and even guides about how to paint the miniatures and make your own terrain. 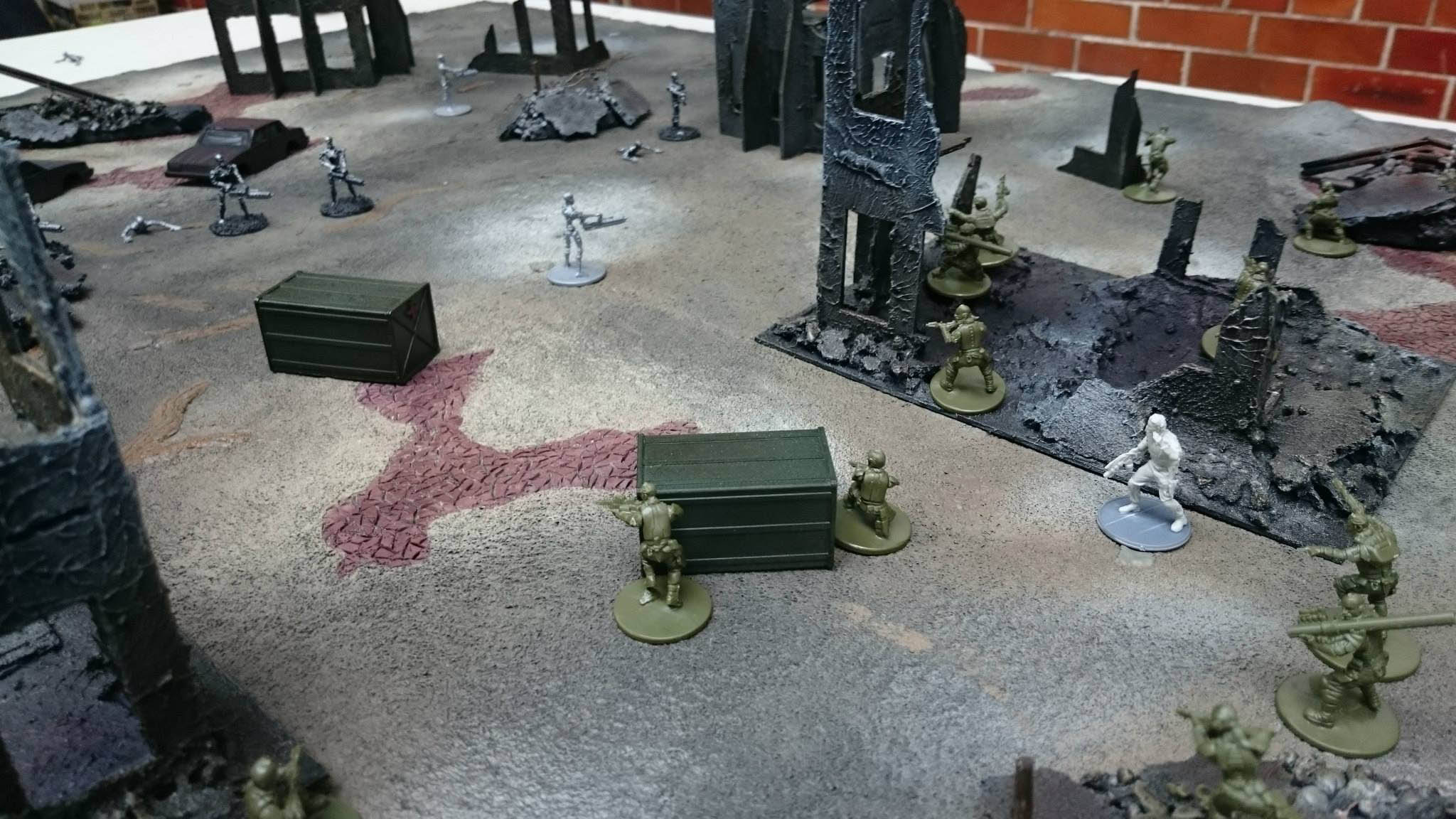 In the game, one player will take on the role of Terminators while the other becomes the Resistance. Typically the Terminators are, of course, much stronger while the Resistance is weaker but has more soldiers (aka cannon fodder). There are options for different weapons too, such as rocket launchers or plasma rifles.

The way turns are structured is a brilliant aspect of Terminator and goes back to that idea of fate shaping the game. Each round players get activation markers depending upon how many people they’ve got left on the board, then to decide how many units they get to activate they must roll the Fate die. If the player rolls a one on the die, they can activate one unit and then pass the Fate die over to their opponent to see how many they get to activate.

Likewise, if they roll a two the same thing happens but they get two activations. However, if they roll the ‘Fate’ symbol then they can’t activate anything that turn, instead play immediately passes over to their opponent. Although some force commanders can negate the roll of a Fate symbol, it’s still a super way to represent the chaos of battle and the fact that, sometimes, things simply don’t go your way.

Another very clever gameplay element, which fits the theme of the films perfectly, is that once per game a player can declare they’re going to travel back in time to affect the events on the board. For example, a Resistance player has just scored a rocket launcher hit on an Endoskeleton that kills it. The Terminator player declares he is going to travel back in time to change what’s just happened. A nice touch is that the player must explain how they are changing the past, for example the Terminator may travel in time to find out when the Resistance fighter was meant to be having his rocket launcher training at boot camp and force him to miss it by making him ill. Likewise, say a Resistance fighter has failed to make his cover saves and gets killed. The Resistance player could travel back in time to ensure he wears an extra layer of armour or doesn’t have a big breakfast to ensure he can dodge better and then make the rolls again. It’s a really cool mechanic that provides some amusing opportunities for story-telling in amongst all the death and destruction.

Talking of death and destruction, Alessio was keen to make the combat system as straight forward as possible to ensure that gameplay flows at a rapid pace. “We were conscious that some people may pick this up because they’re fans of the films but have never played anything quite like it,” explains Alessio.

“So we wanted to make sure the combat, which plays a big part in the game, is as straight forward as possible. River Horse’s motto is sophistication through simplicity and that’s something you can definitely see with Terminator. The core rules are very simple and you can break the basic rules down to just a few pages, however for more experienced gamers we have the advanced rules.”

To make combat as easy as possible, Terminator uses range markers – a little like the one used in X-Wing Miniatures Game. By using the template, players can easily see whether they’re in point blank range, short range or long range, which then affects the number they need to roll for a successful hit (4+ for point blank, 5+ for short range and 6+ for long range). Depending upon the weapon being used, you’ll be able to use between one and five dice during combat, e.g a pistol can only be used at short range and has one die, while a minigun has a maximum long range distance and rolls five dice. These different weapons will certainly come into play as the game expands beyond the core boxset and new characters are added.

In a similar fashion to combat, movement is also handled through templates, doing away with the need for measuring. There’s a template for crawling, walking and running. Again, it all makes for a great introduction to those who are new to wargaming.

However, if you’re an experienced gamer then there’s plenty to get your teeth stuck into thanks to the advanced rules. Although the basic rules mainly cover simple shooting and moving, the advanced rules give players a lot more tactical choices to add to their games. The advanced rules cover elements such as aimed shots, which allows them to roll a die with a better chance of hitting, suppressive fire that targets multiple enemies and ambush, which acts a little like overwatch so units can fire at any enemy units that move into their line of sight.

“I wanted to ensure that Terminator could scale up to potentially be a full-size wargame,” adds Alessio. “Although at the moment we have only created infantry models, we have plans for tanks or fliers, depending upon how well the game does… although people have already expressed interest in them. Even though we haven’t made any vehicle models yet, I still wanted to include rules for them in the rulebook so experienced players can adapt their games to include them. This year we will concentrate on infantry but can expand it further next year. 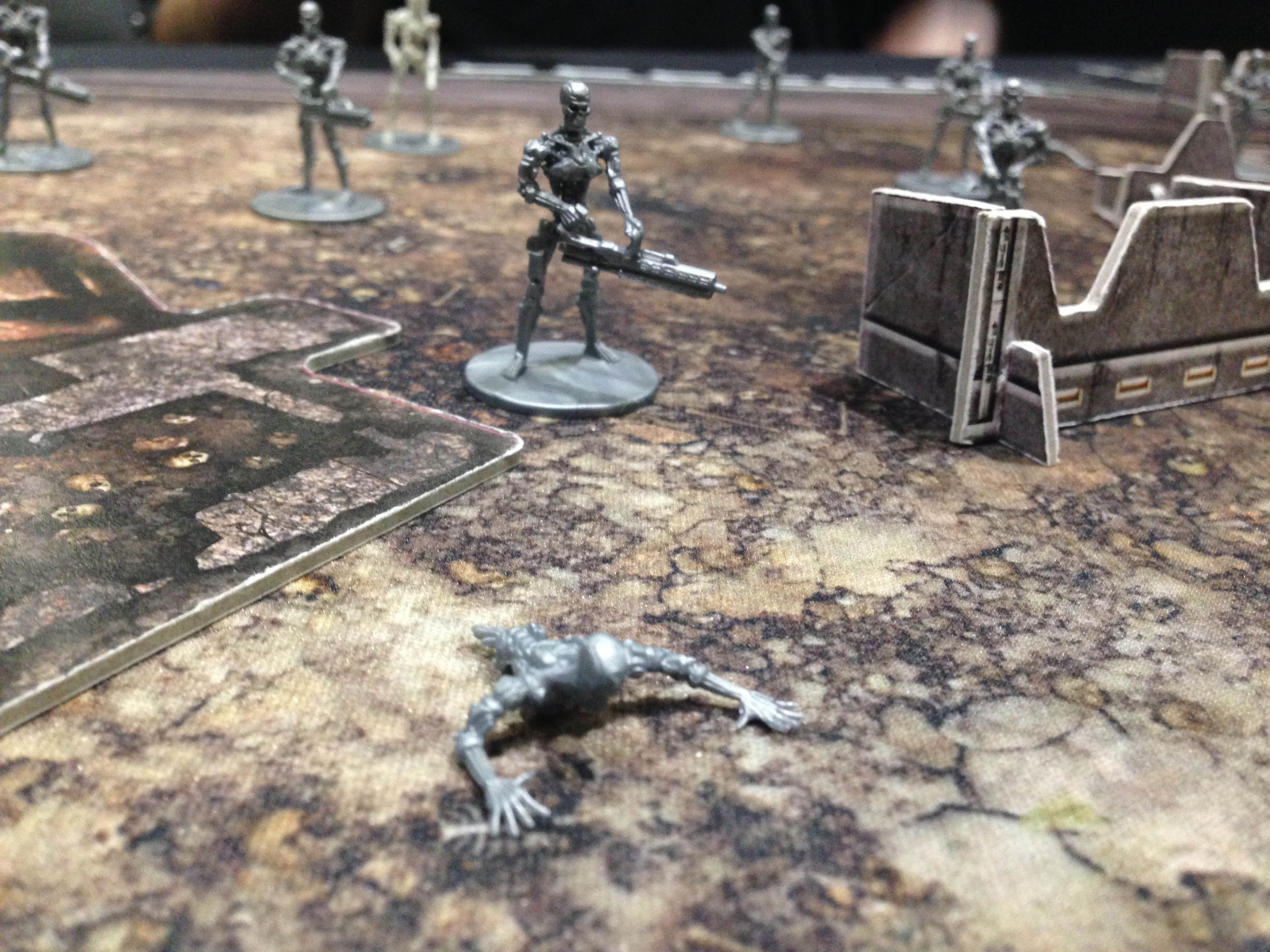 “We only have the license to make characters or vehicles that are seen in the Terminator Genisys movie though but there are plenty of elements in the film that people will be familiar with.” A quick look through the rulebook brings up some recognisable names, such as Sarah Connor, John Connor and Kyle Reese. Arnie’s in there too, although he’s listed as ‘Pops’ like his name in Genisys. Meanwhile on the side of the Machines you’ll find the T-1000 and Infiltrators, which look like humans and can only be attacked at short range when it’s clear they’re actually robots and not people.

River Horse is also planning a full Terminator Genisys campaign in which people will play through the events of the film. There are two scenarios in the book, dealing with an offensive strike on Skynet and an attack at an underground base in the ruins of Los Angeles International Airport, plus there’s an interesting tease about an encounter between the different versions of Arnie’s character – one as Pops and the other as seen in the original film. “To be continued…” concludes that particular section. Once the film has been released River Horse will be adding further Genisys-themed campaigns to its website, likewise new expansion sets are mentioned too… an Arnie figure has just been revealed!

As such, Terminator Genisys: The Miniatures Game is certainly a product with a bright future ahead of it and judging by our play-throughs it’s a fun skirmish game that’s helped by interesting mechanics such as the Fate die and time travelling. As the range of miniatures expands, it’s likely to grow in complexity too, so we’ll be returning to Terminator in a future issue to see how things are panning out. You could say “we’ll be back”… sorry but it just had to be done.