Season Ticket: Celebrating the Anniversary of Ticket to Ride Europe We catch up with Alan R. Moon about his game becoming a teenager

Ticket to Ride Europe is 15 years old, and with a new anniversary edition landing any moment now, there’s no better time to check in with Alan R. Moon about his games becoming proper teenagers.

We almost take it for granted that Ticket To Ride and its various versions are in everyone’s collections. For many, it was their way into the hobby in the same way that Carcassonne and Settlers of Catan was for slightly older players. The game is suspiciously simple, players draw locomotive cards from a deck or select from a market, and attempt to complete routes on the board. If you have a route card that matches a route you control on the board, then you get points. If you’re holding route cards that you didn’t complete at the end of the game, then you’ll lose points equal to that value. The original game was a perfect entry point for new players, but the twists added in the European themed follow up created a whole new challenge. Tunnels and ferries added new route options, and required extra cards to build them, or a particular resource, but the addition of stations is what made the game stand out. Now players could pay a few points to use other players’ already laid track – in a classic spirit of European cooperation – to complete their own route cards.

Fifteen years on and we’re looking at a series that includes pint sized city versions, a version with meeples, a seabound outing, plus map collections for India, Switzerland, Pennsylvania, the Netherlands, and the UK. We spoke to Ticket To Ride’s creator, Alan R. Moon about the game, and what he’s reflecting on 15 years after the launch of Ticket To Ride: Europe’s release. 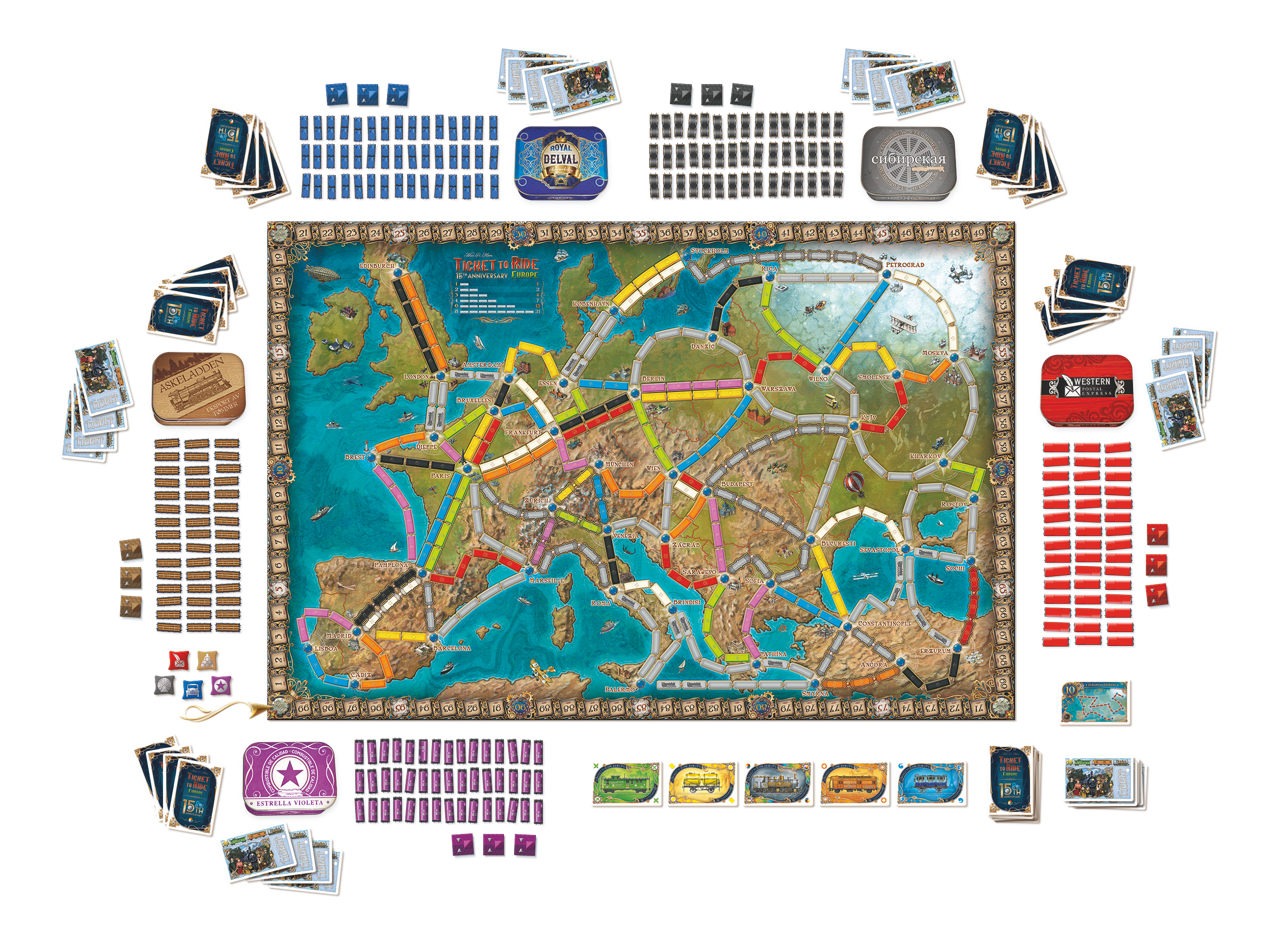 We started by asking what it’s like having a teenager for a game, “so far, Ticket To Ride Europe has been the best teenager ever,” says the designer, “instead of aggravating me and costing me money, it does just the opposite. I wish I had more teenagers just like it.”

While we can’t all have teenagers that do that for us, it is worthy of celebrating the release of this version of the game with the huge and beautiful 15th Anniversary Edition.

“It has been considerably upgraded to become a deluxe version,” says Moon, “this is an oversized version of Ticket To Ride Europe featuring finely detailed plastic trains and stations. The game has also been enhanced with all new, beautiful artwork and expanded with all Destination Tickets designed to date.”

Ticket To Ride Europe is also seen as one of the ‘friendliest’ maps of the series – not only because of the station mechanic.

“The feedback I have seen over the years is that different people have different maps as their favourites and that often changes over time, or as new maps are released,” says Moon, “Europe was definitely designed to be more ‘friendly’ than the USA though. I wanted it to be quite different from the USA map and I think I succeeded in creating a different feel. I’m glad it has been so well received.”

And the reception has been positive from the outset. Europe obviously played better on this side of the Atlantic than the US – which drills home the fact that we’re all in search of something with a little familiarity. Much like how different Wingspan expansions can be enjoyed because the birds you see can also be spotted in your garden, Ticket To Ride Europe (or indeed, any of the localized map packs) allows players to enjoy recognising their local experiences.

“Having two base games in the series, USA and Europe, has allowed Days Of Wonder to access people in two big markets instead of just one,” says Moon, “familiarity with the locations of Europe appeals more to Europeans than having another USA map. I wish I could say that was my idea, but it was in fact the brilliance of the founders of Days Of Wonder – Eric Hautemont and Mark Kaufmann.”

MAPPING OUT THE NEXT ROUTE

The various versions of Ticket To Ride offer different challenges. While Europe is a wider map with plenty of city clusters, others, like the Switzerland map pack makes for tight, two-player games. We asked Moon where he was casting his eye next for an interesting network to make into a game.

“The next map pack could feature two new countries, and we have still not done anything in South America or Australia, so we could see them in the future,” he says, “there are also quite a few possibilities for the next city maps – following on from New York, London, and Amsterdam – and some of these are already finished.”

Of course, it would be hard not to ask about Moon’s opinions of the state of gaming at the moment. The pandemic still looms large in many places of the world mapped out on the Ticket To Ride boards, but it’s the lack of conventions that’s hurting the industry in his view.

“There are so many games being published every year now, it gets harder and harder to make your game stand out above the noise of the crowd,” he adds.

Aside from these worries however, there’s plenty to look forward to for Ticket to Ride. The Designer is currently working on more maps for the game, as well as some other, non-specified products and games outside of the franchise, and “in general trying to live my life as much as possible,” he says “I am grateful that Ticket To Ride and all the wonderful people at Days Of Wonder have given me the means to enjoy so many of the things I love.”

And speaking of love, what is Alan R. Moon’s favourite train ride?

“My favourite train ride ever was from Lindau, Germany to Venice, Italy. The Alps were magnificent. The stop in Innsbruck, Austria was brief but wonderful few hours.”

Although, having checked, we can’t tell you how many points that route would be in the game – which maybe says something about how the best experiences are priceless.

This feature came from Tabletop Gaming Magazine, which is home to all of the latest and greatest tabletop goodness. Whether you're a board gamer, card gamer, wargamer, RPG player or all of the above, find your copy here.