Warhammer, or, more to the point, Games Workshop, is a marmite company in the world of entertainment; one either loves it or hates it. Evidence of the intensity of these feelings needs hardly to be illustrated. On the one hand, we’ve all seen Warhammer miniatures painted to a standard where they might reasonably be called high art in themselves. Cosplayers recreate the armour of Space Marines and Sisters of Battle in painstaking detail. There’s even been a fan animation of such high quality that it could have been made by a professional studio. Fans pour hours upon hours of their lives not only in playing the games and painting the miniatures, but discussing rules on forums, list-building, lore-writing, blogging, vlogging and converting. All fans invariably end up spending small fortunes on Games Workshop products.

On the other hand, scorn for the great G-and-W can often be intense and merciless. Forums ring with cries of rage about the games, about the price of miniatures and about Games Workshop’s business practices. To its detractors, Games Workshop is a monopolistic behemoth that ruthlessly milks its fan base for every penny they’ve got, crushing all other competition whilst pushing ludicrously expensive plastic crack.

It is to this latter group that I put the proposition that – for better or ill – wargaming as a hobby survives in this century due solely to the existence of Games Workshop.

The argument is as follows. We live in an age when the Western world has unprecedented access to entertainment in many and various forms. Since the 1990’s, the most obvious new form of entertainment has been videogaming, which in the span of a few decades has become a multi-billion dollar industry using and developing cutting edge computing technology. As much as the prediction that tabletop games of all kind would simply die out has turned out to be doom mongering (in many ways, tabletop games are now more popular than ever they were), it was not entirely baseless. There can be no doubt that a significant proportion of gamers who, in decades past, would have been recruited into the realms of physical games have been diverted to more digital pastures.

Wargaming has always been a niche pastime – there’s simply no two ways about it. Like anything niche, it requires the dedication of a core of (figuratively and financially) invested individuals to keep the flame alive. There also needs to be a steady stream of new players to replace attritional losses as established players fall away. This has a generational angle to it. Besides the obvious fact that – ultimately – older gamers will eventually literally die off, two other reasons present themselves. Firstly, wargaming is and always has been a hobby for lifers. It is not a casual pastime, but for many a way of life. As people grow older their habits – generally speaking – become more ingrained, and the chances of them attaching themselves to something new gradually decrease. Secondly, social interaction becomes more limited. Partly this is because of the habit-forming nature of growing older, but partly this is institutional as well. For many people, the school – that great mixing pot – represents the high point of social interaction in terms of diverse interests. In just the same way as nits – that itchy bane of childhood – spread like wildfire in the schoolyard, so to do new ideas and things to do. 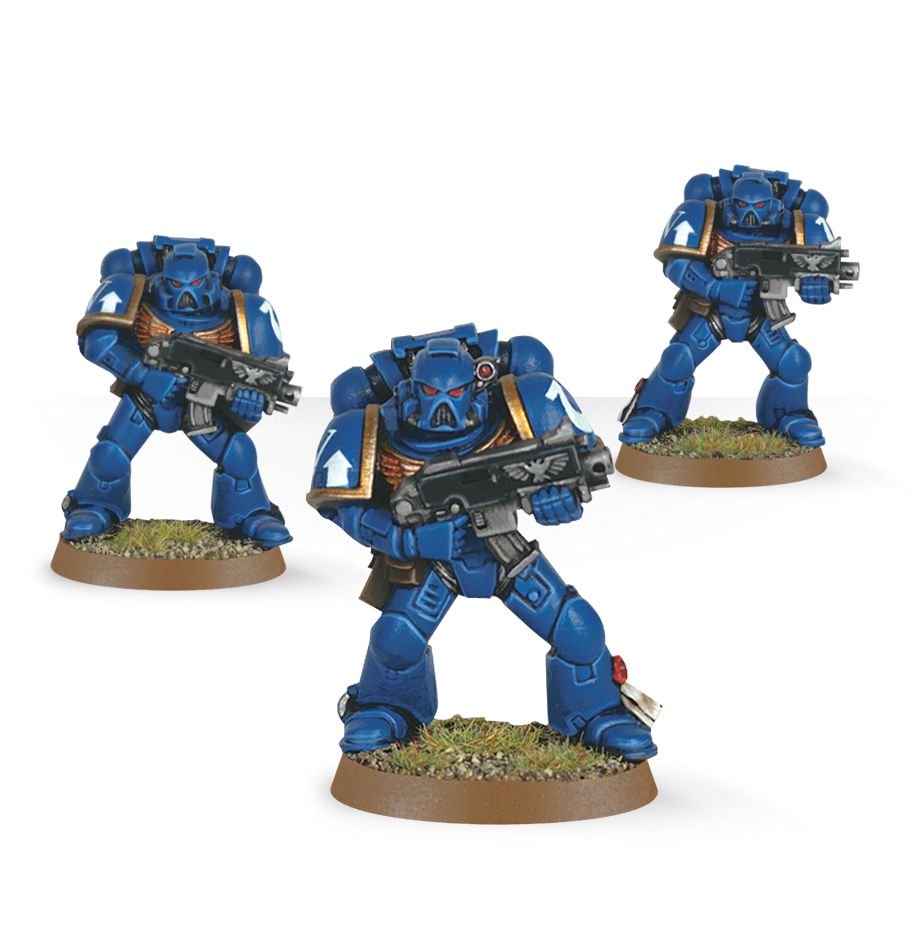 Space Marines - defenders of more than just the Imperium?

The upshot of these two facts – the advent of digital entertainment and the need for newer and younger players to sustain a niche hobby in the long run – is that Games Workshop is, to all practical extents, the sole defender and continuer of wargaming in wider culture. Wargaming is a hard business to be in, and only Games Workshop has managed to ever managed to build the sort of critical mass necessary to penetrate into the mainstream. To the uninitiated, Warhammer is wargaming. For most young boys – and increasingly girls – it’s something a rite of passage at one stage or another, and parents often refer to it as a verb; their children ‘do Warhammer’.

Because of its size and the strength of its IP, Games Workshop alone has managed to survive the onslaught of digital entertainment; in fact, it’s even managed to benefit from it, with a wealth of videogames to its name. More importantly, it and it alone has one great asset that no other wargames company has; the stores. ‘Doing Warhammer’ at a young age spreads through the aforementioned nit effect; how many of us, after all, got into the hobby after we saw some other kids doing it? But where do those kids first hear about it? Through catching a glimpse of those strange and intriguing stores when out on the high street with their parents. So it is through this process – going into a store or seeing a mate who’s done so – that the vast majority of gamers first learn about and are inducted into the hobby, and from there go onto other games. This isn’t even to consider the business side of things. It is no coincidence that the so-called ‘Lead Belt’ (the numerous miniatures companies in Nottingham) should be where Games Workshop’s HQ resides. Just as hobbyists start out with Warhammer and move on to other things, so too are wargaming companies themselves usually founded by ex-GWers.

In essence, then, Games Workshop is the company that keeps wargaming alive. The counter-argument to this, of course, is that it is monopolistic – a very large fish in a very small pond – and that were it to topple another competitor (or competitors) would take its place. This is a dubious argument. The world has moved on from the age in which Games Workshop was founded (again, videogames are the most obvious example) and it is fallacious to think that the Games Workshop’s audience would remain up for grabs were the behemoth to fall. It has not so much crowded out the market, but rather made a market, and if it dies its adherents would simply move on in a way they would not have done in years past. Of course, it could be claimed that if something were to spring up overnight, or one of the larger companies (Fantasy Flight or Privateer Press) step up to the mark quickly enough, it could catch that audience before it dissipated. But that is a big – and in fact unrealistic – if. To reiterate, wargaming is a hard, hard business to be in, and the kind of logistical organisation and financial backing that would be required to expand to Games Workshop’s size would make it impossible to do so in a fast enough timeframe. This also ignores the fact that for many Warhammer players, it is the lore – and the lore alone – that keeps them invested in such a time-consuming endeavour.

Instead, what would most likely happen if GW were to fall would be that smaller companies would see a short-term windfall of players as some migrated to new systems, but the market as a whole would be very much reduced. In the longer term, without those vital stores, the hobby would be condemned to die a death.

If all this sounds like so much hot air, let me give you the opinion of someone who probably knows a lot more than I do on the subject. A little while ago I had the pleasure of interviewing John Stallard, CEO of Warlord Games (who recently provided a guest column in the December issue’s The Last Word) and ex-GW staffer himself. Surely he would be delighted if Games Workshop were to topple from its throne? After all, wasn’t Warlord a competitor? My assumption couldn’t be further off the mark. As well as reiterating all the arguments laid out above, he pointed out one element I had never thought of. For when children and young teenagers take up the paintbrush – ‘do Warhammer’ – so to are the parents, who may have done the same thing in their youth, or something similar like Airfix, presented with an incentive to get into the hobby themselves. It’ll be a way to bond with the kids, after all, and may call up nostalgic feelings of younger years. So they start to look at the hobby, and lo and behold find out about historical wargaming. Now it’s not just playing with toy soldiers – no, it has the gravitas of historical re-enactment. The kids are happy, the parents are happy, and so the hobby lives on.

Games Workshop has done much to distance itself from the wider world of wargaming. It no longer attends wargames shows, and in all its official literature never talks about itself as a ‘wargame’ (I think it’s current slogan for Warhammer is a ‘battle game’). But in spite of itself, and however much it may (justly or unjustly) be disliked by some gamers, we perhaps owe our thanks to it for wargaming’s continued existence. This writer probably owes his job to it at any rate.